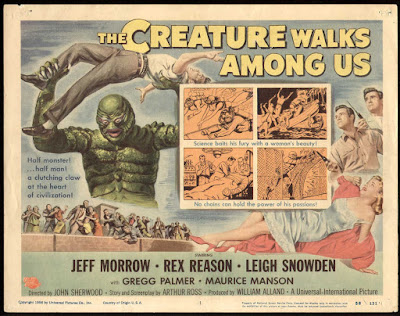 THE CREATURE WALKS AMONG US

Loopy and unjustified, but at least there's some noticeable heart in the third and final chapter of the Black Lagoon trilogy, which is a lot more than you can say about the second.

Welcome to the William Alland retrospective! 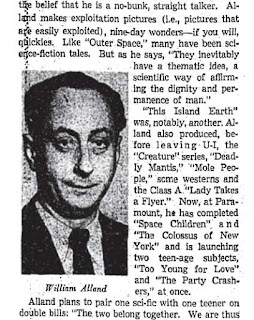 Alland once said you'd recognize him, but he'd have to turn around.  In the late 1930s he fell in with Orson Welles' New York gang, gaining a level of notoriety by abetting Welles' infamous punking of planet Earth, adding his vocal talents to The Mercury Theatre on the Air production of War of the Worlds.  His most celebrated public role by far came in 1940, however, when Alland took on the thankless job of the journalistic framing device in Citizen Kane. 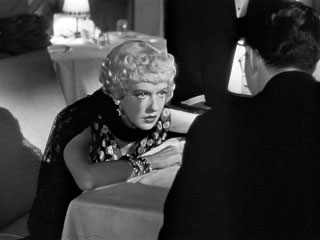 It wasn't till 13 years later that Alland began work on his true legacy.  Now a producer at Universal, he championed a new director named Jack Arnold. Arnold, given his break, made It Came From Outer Space.  The rest was genre film history.  Whether Alland knew it then or not, he'd begun the career of maybe the most important sci-fi filmmaker there ever was not named George Lucas, George Miller, or Ridley Scott.

But let's not condemn Alland to Arnold's shadow.  First, because that's an awful big shadow to put a man in; and second, because with Outer Space, Alland took the first step on the path to becoming one of the most important sci-fi producers—a name to be spoken in the same breath as Corman, Gordon, and Pal.

To be sure, Alland's best work was always his collaborations with Arnold—and Arnold's very best works involved Alland not at all (while his worst, sadly, did).  As we undertake our examination of Alland's five further contributions to the genre, we will discover that—well—more often that not, his post-Arnold productions bore the indelible stamp of mediocrity.  Nevertheless, there remains a certain unquenchable spirit within almost every one of Alland's SF pictures; and he would oversee the production of at least one more film of ambition, and perhaps even canonical quality.

Our subject for today, The Creature Walks Among Us, is not that film.

In 1954, Alland produced Arnold's second SF outing, The Creature From the Black Lagoon, thereby giving birth to the last Universal Horror franchise.  As one of that breed's strongest pictures, it also made a ton of money.  Exploiting his success, Alland had Arnold pump out Revenge of the Creature, the objectively-soulless sequel.  Walks is the follow-up to that; and one would be right to fear even further degradation, as Alland crushed the brand beneath his heel for whatever precious juice still remained within.  Thankfully, Walks clears its immediate predecessor's unfathomably low bar.  Certainly, no reasonable person could suppose that statement contains a promise of actual entertainment—but I aver that there is, at least, something worthwhile to be found in the Gill-Man's second best movie.

As in Revenge, a new cast of characters arrives; and for the third time running we are confronted with a group of scientists, compelled to harass the humanoid fish who once lived in quiet solitude.  However, one cannot accuse the Creature franchise of ever repeating itself in the details.  While Black Lagoon and Revenge were respectively the first and second halves of King Kong, Walks takes the series in an unprecedented new direction, bringing the Black Lagoon trilogy to a close.

This time, the team of differently-moral researchers isn't after the Gill-Man so they can put him in a cage for the delight of tourists. Rather, they've been recruited by William Barton, a depressive, rage-prone drunk with some very dippy ideas about the Gill-Man's scientific value.  Black Lagoon, we recall, made strange and unsubstantiated allusions to marine biology's contribution to the oncoming space race.  Screenwriter Arthur Ross, who helped write Black Lagoon and returned for Walks, now builds an entire plot around the non sequiturs he forced into Richard Carlson's mouth two years earlier.  Barton's immediate goal is to capture the Gill-Man, presently hiding in the Floridia swamps, for brutal experimentation—fair enough.  But he further plans to take what he's learned, using it to rebuild the human body itself into a form fit for habitation in Outer Space. 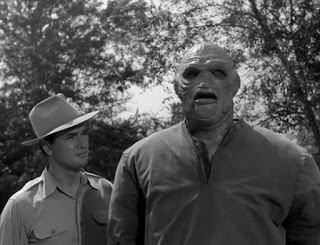 So let's go to space!  Is there one among you who does not want to see Gill-Man X?

For whatever reason, Barton's colleagues still agree to get on a boat with him—even when it becomes clear that his insanity is either running parallel to, or is caused by, the ongoing collapse of his marriage, and Marcia Barton is present, seemingly solely to chafe under the wedding yoke.  Naturally, she comes to regard the mellower, far less mad scientist on the expedition, Thomas Morgan, with increasing affection.  Morgan, for his part, finds himself in the quandary of disagreeing fundamentally with Barton's goals and his methods, but still determined to see the Gill-Man for himself.  (And on the margins is Jed, the handsy boat captain, with his own, less welcome hard-on for the only woman in the film.) 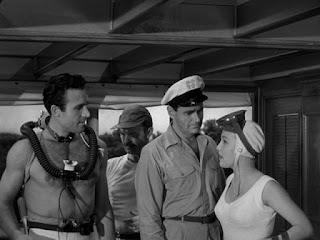 "We are beyond the reach of man's laws here!"
"In the Everglades?"

Everything goes wrong.  The sonar-equipped scientists pursue their quarry, but it's not clear who's trapping whom—the Gill-Man's ambush catches them off-guard in the worst way.  Despite Barton's commands, they respond with as much force as they can muster, and the Gill-Man is accidentally set aflame.  Insensate, his gills ravaged, the scientists reel him in, certain that all they'll learn now is how a Gill-Man dies.  But something miraculous happens, confirming (at least in Barton's mind) his every batshit theory.  The Gill-Man inflates his lungs, sheds his scales, and I suppose his proud aquatic penis must become unretractable as well, since there has to be some reason Morgan orders that he be given clothes, besides the dumb one he states in dialogue (along the lines of, "due to his increasing skin sensitivity, he should be draped in rough cloth").  Intrigued more than ever, Barton renders his captive to his private zoo in California.  The domestic drama plays out as the creature bides his time, waiting for a moment of weakness.  Conveniently, that moment comes once the film has reached a feature's length.

Walks has a complicated plot for a movie that's barely over an hour long, and it helps nothing that there is precious little in the script that ever demands the presence of a Gill-Man particularly.  Walks is concerned almost exclusively with the irreconcilable dialectic between Drs. Barton and Morton, on one hand, and the irreconcilable differences in the Bartons' marriage, on the other.  Any monstrous maguffin could have brought those tensions to a boil. And so it does, inasmuch as by the halfway mark, the Gill-Man has been transmuted into a terrestrial monster.

Yet the set-up offers a minor thrill: a This Island Earth reunion.  Here, Jeff Morrow plays well to the strength he demonstrated in that picture—the evocation of passionate delusion, only now turned to evil—and he adds a patriarchalism that's vile even by 1950s standards.  Rex Reason is decidedly less cocksure and unpleasant than he was in Island, instead channeling as much uncut Richard Carlson as he can into his loquacious proto-hippie of a science hero.

The disintegration of the Barton household adds a certain interest; it even dovetails nicely with the film's overarching theme of human duality.  It's solid stuff, in fact, but what it isn't is a terribly exciting horror movie.  The presumptive subject of the film spends most of his time doing literally nothing.  (Though we can be very happy that the trilogy's theme of beast-rape has finally been buried.)

Only in the very end does Walks remember that its titular character is a famous movie monster.  When the creature finally rises, it's as an eruption of wanton violence, serving almost purely to emphasize Morgan's points about the respective merits of kindness and cruelty, while underlining the human penchant for blaming all our failures on a submerged, animalistic nature.  It's good narrative and somehow unsatisfying at the same time.

The Gill-Man's plight, however, can be breathtakingly effective in the moments when the film focuses upon it, above all the grim, unexpectedly powerful ending—elliptically suggesting the disfigured creature's ironic suicide by drowning, the only way he might ever escape the depredations of humankind.

The grace notes are there; but the lack of sustained horror atmosphere, dictated by the script, is a shame given the man behind the camera.  John Sherwood was an assistant director on practically everything Universal ever made, but when he was finally given his own films, he had a limited directorial career, circumscribed by his unfortunate death.  His brief resume still impresses, however, for it includes The Monolith Monsters, a film just as hare-brained as this one—yet delivered with an even graver tone, and with imagery that alternated between chilling, thrilling, and spectacularly apocalyptic, like few 1950s SF movies ever managed.  Sherwood's staging in Walks, preceding Monolith by a year, is scarcely less mature. The initial confrontation with the Gill-Man is almost scary—no mean feat for a Universal Horror film—and only a few isolated moments from the first Black Lagoon match the impression of animal strength given by the creature's last rampage in Walks.  Sherwood has a facility with the quieter scenes, as well; although they're maybe  too quiet, they do move with a suitable pace, never rushing, yet with commendably little padding.  (Most of the padding comes courtesy James Havens, returning from Black Lagoon to again direct this film's slow and surprisingly unnecessary underwater sequences—this time without Scotty Welbourne to help make them terrifying and beautiful.)

Walks had an uphill climb in front of it, with a thick glaze of incoherent, incomprehensible pseudoscience overlaid onto one defiantly simple concept.  Perhaps a chamber drama was the only way to have made it work even as well as it does.  In fact, it's nearly worth watching just for how counterintuitively it treats its iconic sea monster—I can't say William Alland had a keen eye for quality, but he was never the kind of producer who stifled his collaborators' imaginations, even when he probably should've.

Despite the attempt at substance in Ross' script, and despite the fitful flair of Sherwood's direction, something is palpably missing from The Creature Walks Among Us.  And that's the Creature—who walks, but mostly in circles among Barton's herd of pet goats, endlessly waiting for the plot to give him anything to think or feel, let alone do. The good outweighs the needless and the stupid here, but not by much. 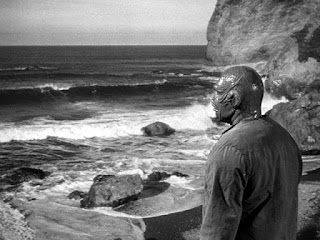