The nadir of the franchise.  One hopes.

Whichever negative adjective you choose to describe Terminator Salvation, for accuracy's sake make it a superlative: of the first four films in its series, it is the stupidest; it is the dullest; it is the messiest; it is the worst.  While it is surely also the ugliest, at least this was intentional; but, of course, since it is also the laziest, "intent" can only go so far.

Traditionally, the ire resulting from Salvation has attached mostly to its director—that fellow with the hepcat moniker that could only have been bearable if he were, in fact, a DJ.  Yet don't blame him alone, for Salvation is the failure of many, not of one.  It stands amongst the most visible combinations of malign indifference below and sweaty incompetence above in the whole history of blockbuster cinema.  It starts with its screenwriters, who wrote an entire script full of placeholder dialogue; continues with its actors, who didn't give a damn; and ends with its production designer, who apparently went fishing and never came back.  The result of their non-labors was a travesty—and, if anything, the man who called himself "McG" probably deserves a modicum of credit just for making it watchable, right up until that moment when everyone's unerringly poor decisions collapse into an infinitely dense black hole of bad.

No fate but what you make, I guess.

To be scrupulously fair, Salvation starts out handicapped.  Whatever sins you ascribe to Terminator 3, it made an honest attempt to be a final chapter, seemingly closing off the "present" of the Terminator franchise forever.  Thus, when the moneymen came six years later to mine whatever value remained in the brand, they found themselves in the position of having little other option than to carry the series into the future; and that's how Salvation came to be a prequel to the previous three films as well as their sequel, thanks to the curious and often-contradictory nature of the time travel that had previously driven the series.

I don't want to think this basic premise is the fundamental reason Salvation came to be a bad movie, although it is absolutely the case that James Cameron never intended his lightly-sketched future to have any independent existence.  That just meant they had the freedom to invent the details!   After all, how many good post-apocalyptic action movies are there?  That's right, there are at least three.  And Salvation could have been a fourth.  Like many others back in 2009, I looked forward to a new take on Terminator, one that engaged directly with Cameron's vision of deadly laser tag between Skynet and its human enemies.  Well, you all know how that optimism was rewarded; the absence of phased plasma rifles in the 40 megawatt range turned out to be the least of our problems.

We begin not in 2029 2018, but in 2003—evidently because the screenwriters felt it was vitally important that their shocking mid-film reveal be spoiled in the first three minutes instead, helping rid the film of any inconvenient atmosphere of "mystery" or "suspense."

So meet Marcus Wright, a prisoner on death row.  He's been given an offer that he can't think of any good reason not to refuse: Cyberdyne's genetics division is in the market for dead bodies, and its envoy, the cancer-stricken Dr. Serena Kogan, has her eyes on his.  What we first notice about Marcus, despite what seems like contrition, is that he is absolutely loathsome, given that the very first stage direction in the script appears to be "[Marcus sexually assaults a cancer patient]," followed by the line, "So that's what death tastes like."  Mark the time, however, since this is the last moment that Marcus will be inherently interesting.  It is also arguably the last time that Sam Worthington's presence merits the description "a performance," yet somehow he's still better than his many-laureled co-lead.  So it goes.  Marcus accedes to the doctor's request, and about an hour later we "find out" that by 2018 his body has been transformed into a prototype terminator: organic tissue over a metal endoskeleton, but still possessed of a human brain and (because this film refuses to avoid what I pray is the worst line in the franchise) a human heart.

In the interim, John Connor and the rest of the survivors of Judgment Day have fought a losing struggle against Skynet with the remnants of the American military—sometimes with jets, helicopters, and a submarine that could not possibly still be functioning given the lack of port facilities.  But mostly they fight with rifles and other such infantry weapons, as have been shown, going on one thousand fucking times, to be completely ineffective against Skynet's hyperalloy war machines.

As a result of their attacks on Skynet, a man is released from their research facility, and, of course, it is Marcus.  He wanders into LA, where he meets a young Kyle Reese, who fancies himself a resistance fighter.  They team up, but Kyle is captured; shortly thereafter, Marcus hooks up with the real resistance.  While nobody manages to question his inability to remember the nuclear war that has defined their reality for fifteen years, luckily the resistance has magnetic mines to protect them from their own stupidity, and when Marcus is partially blown up, his cyborg nature is revealed.  But Marcus tells John about Kyle, and even as John's compatriots try to kill him, John can't help but put his trust in a terminator one more time, because the way he sees it, he has no other choice—his past depends on it.

What the previous three block paragraphs should demonstrate is that Salvation is the most convoluted of the Terminator films by far, very possibly featuring more plot than all of the first three films combined.  (I even left out some nominally important stuff.)  This plot is not completely uninteresting in its basic construction; nor is it, at first, as messy as it could be.  Still, the days when a Terminator movie could be engagingly, deceptively simple are clearly over.  Already tottering, by the last 20 minutes, Salvation has become the most contemptibly dumbassed action movie imaginable—one that, unlike every previous film in the series, possesses nothing to say about either fate or about human beings that could not have been more effectively delivered via motivational poster.

In some ways, Salvation may be the purest representative of its era of blockbuster cinema, a transparently mercenary half-effort, belamed by a PG-13 rating, and trying to hide its meaningless existence behind a juvenile veneer of grim and unrelenting darkness.  As appropriate to the circumstances as that tone is, rarely has the post-apocalypse felt so warmed over.  For his story of America after the rain, McG turned not to any inner inspiration; instead, he simply looked over his shoulder to the grimmest and most darkly unrelenting popular entertainments of the previous five years: Christopher Nolan's Dark Knight films and Alfonso Cuaron's Children of Men.  And is there a clumsy Iraq War reference?  There most certainly is.  You need only add in some essence of Road Warrior, that gritty prototype, and now you—like McG—have concocted a recipe for this disaster. 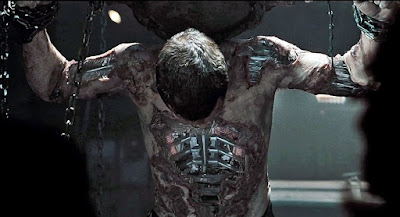 For extra seasoning, add imagery from other popular franchises, like Transformers, The Matrix, or The Bible.

The Dark Knight connection, of course, is obvious.  Yet given a role that calls for nothing, Christian Bale returns less than nothing.  His performance is an exercise in deep insincerity, consisting almost entirely of him reading lines in his Batman voice and looking miserable.  Taken together with his infamous temper tantrum, you begin to wonder if you even like Christian Bale, either as an actor or as a person.  Certainly, his John Connor is a stranger, devoid of the slightest continuity with the earlier portrayals of the character, bereft of anything approaching a personality of his own.

Meanwhile, the actual action content of Salvation, it's—well, it's surprisingly unterrible.  There's a truck chase that's not remotely up to the level of anything involving a truck in any previous Terminator film, but does remain cool enough to serve this lesser outing as its very best sequence.  (And despite a name that should have been left in the role-playing sourcebook they clearly came from, the "mototerminators" that instigate the truck chase are pretty wicked creations.)  While many of the other action beats misfire, enough of them are sufficiently entertaining that they keep Salvation from being a completely unpleasant experience... for about 100 minutes.  But the film, you know, runs two hours, and all this really proves is that it is extremely hard to fuck up killer robots.

The final act, that infinitely dense black hole mentioned above, is where everything Salvation had going for it—which isn't Goddamned much at all, basically amounting to "good sound design" and "explosions"—is eclipsed completely by the inutterable stupidity of the script, a stupidity matched only by the infuriatingly nonexistent production design that intensifies it tenfold.  Reader, try to picture a factory built and run entirely by robots, under the command of a single artificial intelligence: if you are imagining a present-day factory with human-sized halls, doorways, keypad locks and, of all the fucking things, a pristine, Apple-style computer bank with keyboards and giant monitors—well, congratulations!  Your vision is just as limited and parochial as that of designer Martin Laing, not to say the screenwriters and director who provided him no constructive guidance while saddling him with the film's worst scene so far.  Presently, Skynet takes the form of Helena Bonham Carter, because why the fuck wouldn't it?  It has a powerful need to explain its evil and ridiculously dysfunctional plan to its pawn, for the posthuman intelligence must gloat about its genius to somebody, mustn't it?

We waited a quarter century to see Skynet and this is what we got.  I just wanted to point that out.

The damned hell of it is, this is still not the worst part of the movie—not even when you include the bit I didn't mention, a humiliatingly on-the-nose ripoff of an actual Apple commercial.

The worst part of Salvation, of course, is the ending; and the worst part of the ending is that terrifyingly misjudged look of smugness on Christian Bale's face, as a wounded John Connor accepts Marcus Wright's offer of a heart transplant—apparently because, no matter how many times this movie has flat-out stated its themes in plain English, at the end of the day the metal man is a fucking subhuman, and John Connor is the Savior of Humanity, even though, at this point, the ever-shaky central assertion of the Terminator series has come very close to having been totally disproved.

For many years, we imagined that Salvation, one of the worst-received sequels there has ever been, had terminated the franchise for good.  We were wrong; the series came back.  Next time, we'll see what six more years, and basically a full-on reboot, can do.  Well, we already know it can't make any money.  But it has got to be better than this.