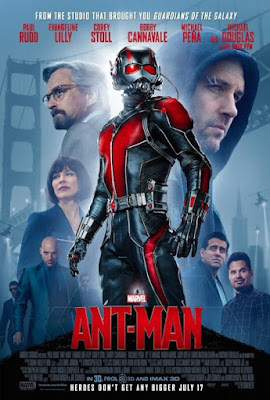 Delightfully pure adventure cinema is here, and if you ever had your doubts about Ant-Man, consider your dumb doubts dispelled.  Seriously, what was wrong with you? 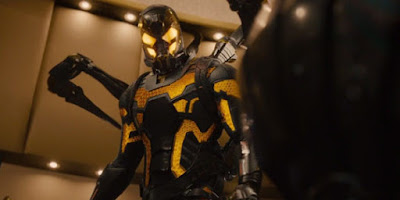 So Phase 2 of the Marvel Cinematic Universe comes to a close, having long since established that the new Marvel method would be to always lead with mediocrity before following up with something genuinely good.  Given that the last Marvel film was indeed a mediocrity in the guise of basic watchability, it's therefore not too surprising that Ant-Man turned out well.  It shouldn't have been a surprise anyway, for Ant-Man, you know, is gifted with the kind of magical premise—a size-changing superhero getting mixed up in a heist plot—that only the most deliberate effort could have ever fucked up in the first place.

However, Marvel seemed to be making exactly that kind of effort when it forced Edgar Wright out of the director's chair in order to fit the film more neatly into its business paradigm. So it's a big surprise, after all, that Ant-Man winds up the most thematically and narratively effective Marvel film there's ever been.  Hell, let's just put it out there—Ant-Man is arguably the single best out of all twelve Marvel movies that our zeitgeist has so far managed to absorb, and I'd only argue against that position myself because I (apparently alone) love Ken Branagh's uniquely spectacular Thor too much to ever replace it in my personal pantheon.

The success of Ant-Man winds up outright shocking when you consider that Wright's replacement, one Peyton Reed, is a journeyman without a single relevant entry on his resume, though I might vaguely recall enjoying his 2000 cheerleader competition comedy, Bring It On.  Well, with Ant-Man, his c.v. instantly becomes accomplished.

Now, Ant-Man is not (quite) as funny as the last great Marvel film, Guardians of the Galaxy, but really only because it eschews its bawdiness.  Neither does it sound as good, since it is not based around a well-curated (if deeply arbitrary) collection of 70s hits, burdened instead with yet another bland score such as have afflicted the Marvel movies since they started.  However, by every other metric—even pure pop filmmaking—Ant-Man ekes out victory over its forerunner.  How did it accomplish this feat?  Why, through the simple expedient of evading any real film-breaking problems throughout its entire runtime—something, distressingly, that only three other Marvel movies out of the twelve have done (which means, of course, that not even all of the good ones have).  Well, I guess Reed stumbled upon the secret: the first step to greatness is the active avoidance of ineptitude. 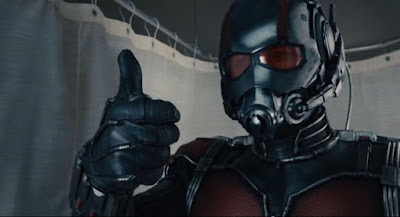 Ant-Man starts back in the 1980s with Dr. Hank Pym, rendered into existence by Michael Douglas and some terrifyingly good de-aging CGI (how far we've come since TRON: Legacy!).  The great scientist has invented something of frankly astonishing potential.  Unfortunately, it mainly has potential for evil, and super-spy agency SHIELD wants it because they are, last time we checked, basically evil.  Pym's not about to give it to them, and he punches one of his persecutors in the face to underline his point.  Seemingly, that is that.  It's not, of course, but it takes a few decades.  Hank hit that guy pretty hard.

In 2015, we meet Scott Lang, electrical engineer, father, ex-husband, ex-con—seems that a few years ago, Scott got canned for exposing corruption at his company, and in retaliation he concocted a Robin Hood scheme to repay its thousands of defrauded customers, ordinary people like you and me.

And if you think Ant-Man bends over backwards to get you into Scott's corner, you're absolutely right.  But as well as it works on the level it's pitched, it swerves right into capital-I Importance with nearly unconscious ease.  Ant-Man is shockingly concerned with painting the most sympathetic cinematic portrait of a Man with a Record that I could name offhand, simply by bringing up one of America's most severe social problems in such a fluffy, family-friendly setting without flinching.  Diving into the horror of it for the sake of warmly acidic humor, Ant-Man got on my best side almost as soon as it had begun.  And this quintessential progressivism is impressive indeed for a movie that could also be summarized, "A white man takes a job from a more qualified woman, then beats up a black guy."

That's not the summary I would choose, but if Ant-Man bends to make an angel of Scott Lang, you can practically hear the spine crack a little, when it explains precisely why Hope Van Dyne, Hank Pym's estranged daughter, is not the hero of this particular story.  It's a somewhat odd development anyway, given that Hope is a character who doesn't really exist in the comics and was basically invented for this screenplay to further its core theme of try-hard parenting.  But we're getting ahead of ourselves.

Scott, wracked by unemployment and mounting child support payments for his own beloved daughter Cassie, inevitably returns to crime when a tip about an easy score comes down the grapevine.  (The grapevine is embodied by Michael Pena's Luis, Scott's current roommate and former cellmate, doing God's work selling one of Ant-Man's most enjoyable gags).  The break-in isn't easy, but the prize doesn't even seem worth it: it's just some "old motorcycle gear." 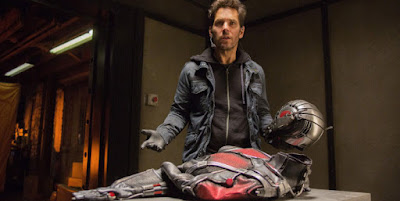 In the first but not last sign of the screenplay's discomfort with the wider Marvel Universe, we have a man who can't recognize a superhero costume when he sees it.

Trying it on, because why the hell not, Scott takes his first leap into a much, much, much larger world.  Although to be absolutely precise, the world stays exactly the same size.  But it sure seems bigger.

Now finding himself taken under the wing of the straights he sought to burn, Scott becomes embroiled in an industrial sabotage scam against Hank and Hope's company, devised by none other than the feuding father and daughter themselves.  Taking on the mantle of the incredible shrinking Ant-Man, Scott agrees to help the Pyms stop their mutual corporate rival from recreating—and weaponizing—Hank's miniaturization process.

This is where Ant-Man's two genres collide and, naturally, they taste great together.  The heist element gives what amounts to a boilerplate superhero origin a momentum and shape that such stories rarely possess, so that Ant-Man, although heavily obligated to expound upon its nonsense science and establish its characters, nonetheless always feels like a real adventure—primarily because it always is.  If the big heist itself is not remotely up to the classics of its own genre—honestly, Scott's non-powered burglary of Hank's mansion is the better of Ant-Man's two heist setpieces—it's certainly entertaining enough, and shades quickly into Ant-Man's highly idiosyncratic superheroics, which is what we really want to see.

It's been years—decades?—since we've seen another entry into science fiction's resizing subgenre, and the budget afforded Marvel movies makes for one gorgeously-rendered example of the form.  However, in a turn I don't remember at all from the comics, Scott retains all the strength of a full-grown man when he shrinks.  The result is that Scott can engage in elaborate and intriguingly unique action sequences, shrinking and growing at will.  (Obviously, the idea that a resized object retains its mass is heavily subject to artistic license, and it does nobody any favors to point out every moment where Ant-Man indulges, since it happens approximately 1000 times.)

But just as visually appealing as Scott's size-changing is his adoption of another piece of Pym super-science, the thing that really makes him Ant-Man—the telepathic helmet that gives him command over his own personal hymenopteran army. 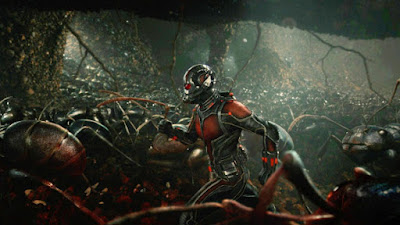 I love comic books so much.

The one rule is that you don't screw with the regulator on the suit, or you'll find yourself shrunk into the microcosmic oblivion of the quantum realm.  Apropos of nothing, in Ghostbusters, the one rule was not to cross the streams.

Ordinarily, great superhero movies need great supervillains, and on this count, Hank's former protege, Darren Cross, as realized by Corey Stoll, is not—that is, until he finally dons the Yellowjacket suit, his militarized revamp of Hank's Ant-Man gear, and takes the fight to Scott in the most direct manner possible.  For a moment, Cross becomes the most frightening villain that has so far appeared in any of these movies; it doesn't hurt that the Yellowjacket costume bears more than a passing resemblance to both a jack-o'-lantern and sex gear, as well as a gross insect.

Their battle itself, while terribly thrilling on its own tiny terms, soon winds up the most good-natured satire of superhero blockbusters you'll ever see, when Peyton Reed (frankly brilliantly) sees fit to cross-cut his diminutive action with a more objective viewpoint, revealing it as what these things have always been: toys being dashed across a child's room.

Yet the real genius of it is that the half-joking climax is channeled through such genuine stakes and real emotion that, in every single moment, big and small alike, it is almost impossible not to care deeply about what's happening.  This might be the most basic task of populist cinema, but sadly it's one that superhero movies don't always accomplish.

In this department, Ant-Man has the advantage of being nearly self-contained—technically, the fate of the world might depend on our heroes, but the prospect of a legion of Yellowjackets taking over the planet is a distant one.  Scott, Hank, and Hope are thus freed to fight, not for all humanity, but for their families and for themselves.  Fittingly, Ant-Man seems all the bigger for being smaller.  And it deals in more unabashed sweetness than just about any superhero movie ever made, without being half as conventional as its generic bad-dad template initially promises.

And, for once, a Marvel film's universe-building isn't shoved down the audience's throat in every other frame.  It makes its connections, but it keeps them subdued.  Of course, it does have its cameo—a rather superb one, in fact, that takes its cue from that great comic book tradition of giving a more popular character a guest star role in the first issue of an unknown quantity's book, to build interest (and goose sales).  When translated into film, of course, the "more popular character" becomes the "actor who is the cheapest," but it's still nice to see who shows up, especially in a scene that plays exactly as it should: a tangent from a far deeper, far richer story.

Ant-Man is rich indeed, particularly in its mesmerizing denouement.  But this is, unfortunately, where you can see the hand of Kevin Feige reshaping the material into something different, lesser, and more amenable to his corporate purpose.  There's more than a whiff of the 1950s and the 1980s to Ant-Man (not to even mention the prototypical superhero joints of the 1990s); strongly inspired by the mass of its forebears while never obviously quoting any of them, it remains a sci-fi weirdie as much as a piece of 21st century Marvel Cinema.  The ending might have been almost unbearably powerful were it not beholden to seven already-announced sequels, the promise implied by the invocation of "time and space" making it absolutely clear that there was one draft of Ant-Man's script that was even closer to flawless.

This Ant-Man isn't flawless, to be sure.  That score remains the most active problem, particularly those insultingly generic cues deployed for the first heist.  And the narrative bridge that links Scott and Hank is tenuous to say the least, while Scott's full-sized strength at any stature defuses the danger that ought to be inherent to shrinking.  Finally, as unfair as it is, you'll want to savor Scott Lang's low-angle perspective a little more than the film's mercurial pace ever lets you.  Still, I suppose this last complaint must really be a compliment, when it boils down to that mere whine, "But now I want more."