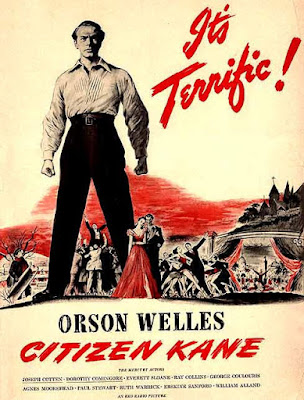 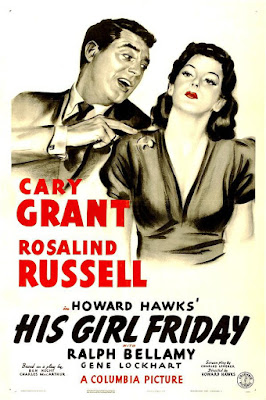 HIS GIRL FRIDAY (1940)
This is the story of two newspapermen: Walter Burns (Cary Grant) and his ex-wife Hildy Johnson (Rosalind Russell).  When they happen to reunite on the eve of her marriage to a new husband, the schmucky Bruce Baldwin (Ralph Bellamy), he keenly feels a renewed need for her hot, hot journalism.  Presumably, what ensues as he attempts to win her back is supposed to be enjoyable; however, it involves a lot more railroaded murder suspects, corrupt city politicians, and women attempting suicide than is usual for a comedy.

Sure, I watched this subsequent to Citizen Kane, but obviously the real reason I'm putting the 1940 entry after Welles' 1941 picture is because I earnestly wanted to bury the lede: I didn't like His Girl Friday at all.  And this is a curious thing.  Because I do like Grant, whose charisma almost always overcomes whatever limitations his characters might have, but not here; and I rather adore one of Friday's screenwriters, Ben Hecht, who was responsible in part for rebuilding a bad Noel Coward play into one of the greatest films made, Lubitsch's extraordinary Design For Living; and I have nothing against director Howard Hawks, either, who—after all—did also make The Thing From Another World.  Friday starts out rather amusingly, but becomes with each passing minute more wearying, as Hawks' overlapping dialogue shades from entertaining to an outright chore to listen to—I've heard it compared to a machine gun, and you know something that I'd really rather not prefer to hear for an hour and a half?  A Browning automatic rifle like His Girl Friday, fired right into each of my fucking ears.  Tastes vary, of course; and I can see how someone else might find all this appealing.  But for myself, I became increasingly disturbed by the avowed sociopathy of the central duo.  Their screwball antics revolve around a scenario that soon becomes too dire to really be particularly funny—and winds up pitched toward the audience without half the slapstick spin it needs to get there.  Nonetheless, respect must be offered to Grant and Russell and all their supporting players—the difficulty of reciting this script, which must've run twice again the number of pages a 90 minute film generally should, deserves some kind of commendation.  But we don't grade on a curve just because something was "hard"; it should also be some value of "pleasurable," too. 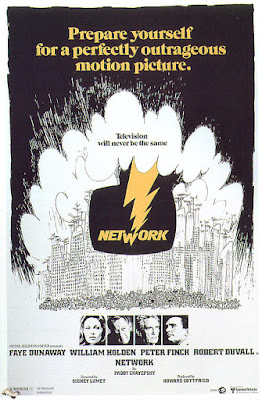 NETWORK (1976)
Howard Beale (Peter Finch) threatens to kill himself on live TV: ratings go up, and instead of being fired, the man gets his own show devoted to screaming at the American people.  Max Schumacher (William Holden), his oldest and best friend, can't countenance the use of the increasingly-unbalanced Beale as a geek show; he takes the axe instead.  Meanwhile, Max' emotionless lover Diana Christensen (Faye Dunaway) develops early reality TV with the help of communist bank robbers.  American broadcasting has never been worse—nor more popular.  But when Beale's ratings slip, Christensen gets the idea that maybe a televised death is exactly what they need to get the sponsors back on board.  And somewhere in the midst of all this mayhem, CEO Arthur Jensen (Ned Beatty) educates us upon the conspiracy of corporations that really runs the world.

Champion screenwriter Paddy Chayefsky's wonderful Network is a work of brilliance, though it is brilliant more for its manner than it is its story, or even its ideas.  Paradoxically, it is made to entertain us utterly, while advancing its notion that TV in specific, and popular media in general, is destroying human individualism in favor of mass corporate conformity.  It is satire, of course—satire that's as blunt as punch to the nose—but it's still easy to get swept up in the incandescent performances that bring life and verve to every last one of Chayefsky's variegated ideological golems.  Who doesn't feel a jolt go up their spine when Peter Finch declares that he is indeed mad as hell, and not going to take it anymore?  (Not the Academy, who gave Finch an Oscar for his electrifying portrayal of the mad prophet of the airwaves.)  Who listens to Ned Beatty's shrieking reconciliation of capitalism and communism—the expedient, he supposes, is to turn every human into a shareholder—and doesn't think, for a moment, that it sounds like kind of a great idea?  (Beatty received an Oscar nomination.)  Who doesn't recoil when Faye Dunaway chirpily suggests that low ratings can be solved immediately—with only a touch a murder?  (Yes, nominated and won.)  It's a loud movie, a fierce movie, often a terribly shrill movie, and it is from beginning to end a truly ridiculous farce—and it's about all director Sidney Lumet can do but stay out of the way, with the quiet competence that typified his 1970s films.  But this only heightens it all the more when he does deploy bracing visual style to underline Chayefsky's cartoon characters' cartoon points.  Network, routinely pointed to as the high water mark of New Hollywood, just about deserves that encomium—although I don't know why Chayefsky, or that stalwart New Yorker Lumet, or anybody else who helped make it really needs that loaded epithet, "New Hollywood," tossed in their film's direction.  It may well embrace everything that was good and even great about that movement, but it sees fit to reject all of its weaknesses, too.  This is no introspective, navel-gazing, slow-moving, lazily-exploitative, dully-naturalistic exercise in gritty realism and social consciousness!  This is fucking Network! 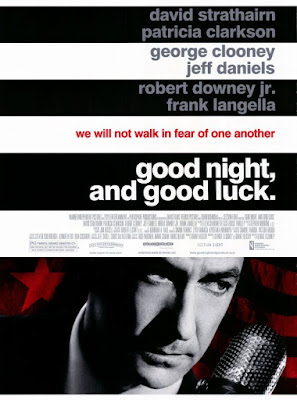 The last thing I want to do is downplay Edward R. Murrow's contribution to our democracy: despite my love for the popular culture of the decade, if I'd been alive in the 1950s, I don't imagine that I'd have had a particularly easy time of it.  George Clooney's sophomore feature as a director, however, is so content to do absolutely nothing, other than to copy Murrow's statements verbatim, that I cannot imagine for the life of me why it even exists—except, perhaps, to show in high school history classes, during that brief era when teachers did have access to DVD players, but could not yet simply bring up Murrow's actual broadcasts on Youtube.

In terms of making a narrative out of Murrow's true story, Good Night's boring and pointless subplots, such as they (barely) exist, are evidently present solely to bring the mercifully brief film up to a feature's length—and not to its benefit.  (The same must be said of the period advertisements and all those endless bad musical montages, that taken together probably comprise about eight minutes of footage.)  Indeed, Good Night is about as character- and incident-free a movie as I've seen, a movie that treats the depression and suicide of one its ensemble as nearly incidental and nothing to very much concern yourself about.  (Personally, I kept wondering why the picture wasn't about him.  His envy, his feelings of betrayal and worthlessness... these are the things movies are made of).  The film shines, to the extent it shines, when David Strathairn gets to put on his Murrow impression—and, yes, it's strikingly good.  Murrow's words and Murrow's defiance are inherently interesting; but, of course, Good Luck can only borrow Murrow's compelling manner and compelling content, for it is constitutionally incapable of making it its own.  Naturally, it doesn't exactly help that McCarthy's fall from grace is something of a foregone conclusion.

So, it's a bad movie, and that's before even getting into Clooney's eye-rolling Baby's First Formalism.  Good Night's arbitrary stylization, apparently, is meant to recall the 1950s—and it begins and ends with "this movie is shot in black and white."  And, by God, it certainly is shot in black and white.  It is shot, also, with fidgety mobile cameras that would not exist for a half century; upon filmstock which—at best—makes it kind of look like a movie from the 1960s; and, worst of all, in a widescreen aspect ratio that cancels any specific relationship with 1950s television whatsoever .  (Sometimes, I will admit, the widescreen frame is used to create compelling juxtapositions between foreground subjects and the Academy ratio cathode ray tubes in the background.  But this is also pretty rare.)  A quick poke around reminds me that people were actually into this, and that makes me a bit cranky—since praising Good Night's B+W as appropriate basically reads to me as "I never actually watch movies from the 1950s, and have only a half-formed idea of what they look like."  Nor is it terribly good on any other merits, either: bereft of the straightforwardness (particularly the focal quietude) of real Golden Age cinematography, it's still not much more than blandly competent in its own right.  Now, Robert Elswit is a fantastic cinematographer—Nightcrawler, anyone?—but how this earned him an Oscar nomination quite eludes me.  (Those Best Picture and Best Director nods were, of course, even more ill-deserved.)  It somewhat goes to prove a conclusion about the movies that I reached a long time ago, from watching others' reactions—the more important a film's subject is, the more importance the film itself accrues, and the more people will assume that, somehow, "importance" makes something "great."  And as for that period at the end of the title?  I'm not dignifying that piece of punctuated pretension for a second.