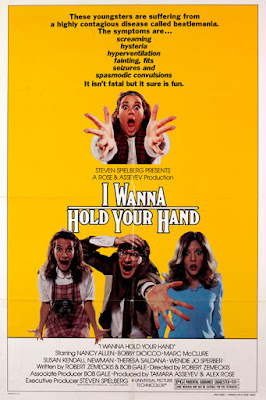 I WANNA HOLD YOUR HAND

Say, did you know that the Beatles were popular? 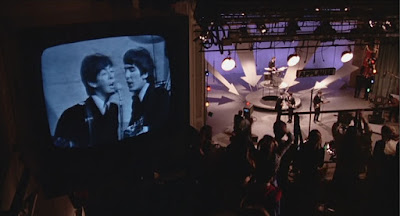 Robert Zemeckis was born wearing a blue collar in Chicago in 1952, and seventeen years later—over the objections of his parents—he determined to become a filmmaker.  Not knowing how the hell he would do that, he pled his way into the University of Southern California's famed School of Cinema-Television.  He arrived with the same stars in his eyes as his fellows—but also with a very different set of values.

On the threshold of the 1970s, you see, the typical CNTV geek would have found himself deeply invested in the films of the French New Wave, along with the war on fun waged upon American audiences by the New Hollywood Cinema—but not Zemeckis.  His icons were the James Bond films and Walt Disney's cartoons and comedies—of Hollywood, in its older, more populist forms.  Of course, since I'm coming dangerously close to ascribing to another a rather unpopular opinion of my own, I should surely point out that Zemeckis himself notes that watching Bonnie and Clyde was one of the key events that inspired him to go to film school in the first place.  (Indeed, in his early works you can kind of see that invidious influence, which is not—perhaps needless to say—much to their benefit.)

Well, misplaced Arthur Penn fandom or not, Zemeckis had goals beyond provoking Bosley Crowther or pandering to counterculture snobs.  Possessed of aspirations that were simultaneously more humble and far more profound, there would forever remain in Zemeckis' films a distinct lack of self-importance, even as his works tangled with increasingly important issues, like the sweep of American history, the intersection of science and faith, and (in his greatest triumph) the question of why people bother struggling to survive at all.  But that's Zemeckis for you, who has referred to the bulk of his classmates as "hippies."  Luckily, he did manage to find one sympathetic soul at the CNTV.  His name was Bob Gale.  They graduated in the same year (1973), and together—with Gale as Zemeckis' screenwriting partner—they went out to try to make movies to entertain the people.  Eventually, the Two Bobs would find great success—but not, I'm afraid, until after they'd already discovered great failure.

And this gets us slightly ahead of where I need us to be, because what this brief sketch omits is how Zemeckis made the acquaintance of a man not unlike himself: Steven Spielberg.  Having forced his way into Spielberg's presence, Zemeckis subjected the director to his thesis short, "Field of Honor"—and Spielberg, having loved it, rewarded the young man with his mentorship and friendship.  (And we can still be thrilled about this development, even though actually watching "Field of Honor," in my opinion, is only more likely to make you think less of them both.)  Naturally, we'll have occasion to return to the Zemeckis/Spielberg combine as we progress through this retrospective.  For now, however, let's just say that while even today Zemeckis still has a foot in Spielberg's shadow, you could turn that particular denigration of the man completely around.  I'd rather ask why Spielberg, once the king of popcorn spectacle, cannot in 2016 be more like his one-time protege Zemeckis.  But I suppose these questions belong more properly to a Spielberg retrospective; for the time being, let us content ourselves with the study of the career Speilberg launched, by producing Zemeckis and Gale's first film, a little picture by the name of I Wanna Hold Your Hand.

...And, yes, this introduction, while a necessary evil to get our retrospective started, probably does not obscure its other, baser purpose: namely, to put off discussing the movie that Zemeckis and Gale actually made under their mentor's tutelage, which failed at the box office and was practically forgotten for years—unsurprisingly, given that it is frankly fucking awful.

Hand tells the story of four teenage girls—Rosie, Grace, Pam, and Janis—and of one fateful day in 1964.  The most important thing to know is that Rosie is a die-hard fan of an obscure Liverpudlian musical quartet, and it's at Rosie's instigation that they make the journey from New Jersey to New York in order to witness these so-called "Beatles" during their performance on The Ed Sullivan Show, something they could have done from the comfort of their own homes, although in fairness, in 1964, televisions were only about eight or nine millimeters across.

Rosie's traveling companions aren't all maniacs for the Beatles, however.  In fact, the only other real fan is Pam, who's a lot more casual about it than Rosie (although in the comparison, nearly anybody would be); and Pam is only tagging along because Rosie has convinced her that—with Pam's impending elopement to an unseen fiance—she needs to cut loose one last time.  Grace, meanwhile, is an aspiring photojournalist, and while her zeal to see the Beatles is perhaps even more serious than Rosie's, it's only because she wants to break into their hotel room and get some candid shots of the group, in order to make her name as a paparazza.  Though her plan is essentially criminal, it meets no resistance from Rosie, who'd love to meet the Beatles (especially Paul!); and Pam's objections are quickly overcome, too.  It's surprising, however, when the last girl, Janis, comes on board, because she hates the Beatles.  But she'd also like to meet the mop-topped crooners face-to-face—if only so she can tell them exactly how much they suck.  Finally, a couple of boys get roped into this nascent caper, too: Larry, because his dad owns a limo, which is crucial to Grace's scheme (the cops won't stop a limo at the barricade surrounding the Beatles' hotel); and Tony, because he wants to screw Grace, and, God help us all, he just will not go away.  The girls succeed in infiltrating the hotel, but with more complications than they planned.  Ultimately, they're split up, as they pursue their own separate adventures.

This really only takes into account the first half-hour of Hand, which becomes so incredibly dense with circumstance as it goes forward that detailing the plot any further would quickly spiral into a thousand words.  The important points are that Pam is the only one who manages to actually get inside the Fab Four's hotel room, but only after they've left; Rosie meets a fellow (male) superfan, of such abject and terrifying nerdiness that he'd be wearing a pair of pointed ears if only Spock were a Beatle; Grace is so determined to get her pictures that she undertakes to prostitute herself in order to raise the cash to bribe her way into the show; and, lastly, Janis and Tony run around town, being unpleasant in various ways.

I expected, early on, to say that one's enjoyment of Hand is dependent upon how tolerable they find the film's absolute surfeit of high-pitched shrieking.  Thankfully I don't have to resort to a sexist canard to get my point across: oh, this movie is shrill, all right—it's apocalyptically shrill.  But the shrillest and the most annoying characters are guys, especially Tony, but maybe especially Richard, the Beatles dork with the affected nerdlinger lisp.  (It's difficult to say who's worse: Tony is definitely more worthy of a punch in the face for his typically misogynistic anti-Beatles rhetoric along with his generalized quasi-rapist vibes; on the other hand, while Richard at least has the capacity to be amusing, that nasally voice triggers the primordial swirly instinct in even the most uncool viewer imaginable, namely me.)

The gals tend to be somewhat more acceptable, though not completely so, and there's a lot to be grossed out by in Grace's patently devious behavior, creeping right up to the edge of "sociopathic" before writerly convenience draws her back from the precipice.  Anyway, Grace is certainly the worst of the bunch, but Janis' eye-rolling hipster hatefulness really isn't much better.  She winds up redeemed too—however, I appear to have missed the precise manner in which this occurs, since by this point I had nearly fully-disengaged with the movie in progress, only reacquiring my focus once Hand moves into its final phase, the Ed Sullivan Show performance itself.  (Surprisingly, the finale is actually enjoyable, perhaps mostly because it serves as premonition of things to come—there is a prototypically Zemeckian moment where he combines his staged recreation with real TV footage, creating a fully immersive and believable Ed Sullivan experience—but surely it can't hurt that I would describe myself as a mild Beatles fan, too.)

But wait!  We needn't confine ourselves to just the characters when we're talking about Hand's signal quality of shrillness: it is present in virtually every decision its director makes, and omnipresent in the script's hyperactive, childish sense of humor, which tends to top out at knocking shit off tables and shelves.  Like "Field of Honor," if far less unbearably surrealistic in its construction, Hand represents the baby steps of one of the zaniest of all great directors, still very much in the process of learning how to marry the tone of a cartoon to some kind of palatable narrative.  In the future, this would become Zemeckis' greatest strength, so at the very least we can be thankful that Hand's commercial failure didn't smash his unique personality, although it certainly could've.

It's inevitable, however, that Hand attempts to position itself as a successor to Richard Lester's great Beatlemania comedies—which are still enjoyed today precisely for being zany as all hell.  Sadly, it isn't close to being in the same league.  The difference is quickly perceived: A Hard Day's Night and Help!, driven by shockingly effective comic turns by the Beatles themselves, might be unrelentingly goofy, but their goofiness is, for the most part, understated and good-natured—and very, very British.  They're beguiling, is what they are. 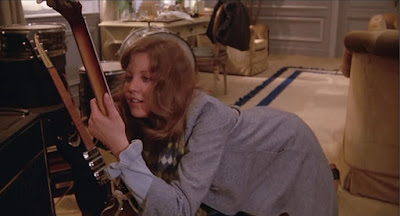 Obviously, it would all work if it were funny, which it typically isn't (outside of a marquee on the CBS Building that reads "The Beetles," the only genuinely funny part of Hand is when God appears, via a Beatle-loving bolt of lightning).  Yet it still might have worked, even without being funny, if it had some recognizable heart, or its characters felt recognizably human.

So the shorter version is this: until this moment I had never realized how successful Hand's KISS-centric crypto-remake, Detroit Rock City, actually is.  As arguably-not-great as Rock City remains, it still treats its characters with a sincerity that goes somewhat beyond their service as props in a neverending series of clumsy physical gags.  Hand, unfortunately, is missing a crucial first act—it gets naught but a truncated prologue instead, set in a record store thronged with screaming Beatles fans.  Thus we never see these girls at home, nor at school, nor in any environment at all that might establish a baseline of normalcy against which the overwrought insanities of Beatlemania, not to mention the girls' rebellion, might be profitably contrasted.  (Indeed, in some respects, the script is outright incompetent—we don't meet Pam's fiance till five minutes before the movie ends, and only at this extremity do we realize that he's kind of a dick, whereas nothing has really suggested any actual conflict within Pam, beyond Zemeckis and Gale's incisive commentary, "The natural response of the female organism to the Beatles is to lubricate.")

It's all the stranger, because the Two Bobs would soon prove themselves some of the most efficient, capable, and emotionally satisfying storytellers in the business.  Unfortunately, however, there is little value to be found in this film beyond all the lessons it must have taught them about what not to do.