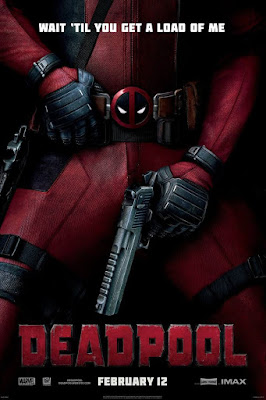 More fun than funny, really, and very nearly crippled by an unrelentingly dull A-plot, Deadpool still winds up being a rather appealing hour and a half at the movies, thanks to its star and its willingness to let you know how incredibly desperately it needs your approval. 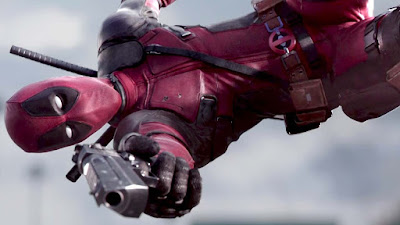 Deadpool, which has come to represent the life's work of Ryan Reynolds—and which also, I think, shall be the final referendum on whether or not we actually want him to be a movie star—is such a tremendously successful film in certain ways that, in a very narrow and technical sense, you can almost describe it as perfect.  It achieves every last thing it sets out to achieve, and winds up a diamond-flawless example of the exact thing it wants to be: namely, The Same Incredibly, Even Tediously Generic Superhero Origin Movie That You've Already Seen, Probably Several Times, But Now With Dick Jokes, An Awful, Awful Lot of Dick Jokes, Often Delivered Via Direct Address Because Metafictionality Is Hilarious.  Hopefully, this will not become a new subgenre.

Anyway, one of the key goals of Deadpool, I think, was to be kind of obnoxious, but in an almost comforting way, like your best bud in high school who had almost nothing of intelligence or insight to say, but nonetheless used a lot of swear words, with a certain gutter poetry, to say it.  Your enjoyment of Deadpool will depend principally upon how amusing (or tolerable) you find its brand of immature faux-edginess (and the very occasional real edginess, which sometimes slips in despite being so at odds with the film's staunch and frankly square commitment to never exploring the possibilities of its main character's avowed amorality, even for laughs).  For a prime example of the kind of empty provocation I'm talking about, let me ask you this: do you think you'll enjoy the screwball romantic banter between our hero (for lack of a better term) and his paramour, of a kind that revolves around which of them can invent the most disgusting story about fictional childhood sexual abuse?  What if one of them accidentally recalls certain imagery from Room?  Well, if that's your jam, then Deadpool is a comedic masterpiece, and they made it especially for you.

Now, I'm not the "you" of that hypothetical (at least I don't think I am), and yet I certainly didn't regret my time with old Wade Wilson.  Perhaps more accurately, then, the quality of your experience of Deadpool will depend on whether you think it's cute when a movie is trying so damned hard to shock you (without shocking you too much, of course, or ever letting it get in the way of the embarrassingly arid genre exercise that constitutes its plot!), while at the same time letting you know that it knows that its comic stylings project an unmistakable air of pathetic desperation.  For nothing about Deadpool, faithfully interpreting the spirit of the famously meta comic, is still even half as meta as the single weird request the film makes of its audience: to laugh at it, essentially for trying to make you laugh.  (Consider Deadpool's oft-repeated koan: "MAXIMUM EFFORT!"  I don't think it'll catch on.)  But if nothing else it makes Deadpool a genuinely fascinating motion picture.

What does not make Deadpool fascinating (as you have no doubt intuited) is its story, which is a hacked-up structural jumble, possibly kind of shitty on purpose, although—in its defense—it's never close to confusing, because its beats are as predictable as the procession of the moon and stars in the fucking sky.  We begin in medias res—that old chestnut—then get thrown back into a flashback, then return to the present, then get another flashback, and then catch up with the story in progress about halfway through, at which point we finally barrel into a third act so interminable and schematic that it would easily register as a parody of superhero films and the genre's typical overbloated finales, if only it ever seemed the least bit self-aware about this particular aspect of its own construction, in the same way it seems impressively self-aware of everything else.  Still, I suppose I should try to summarize Deadpool's plot for you:

Wade—the man who will be Deadpool—is a "mercenary."  (This is to say, he's a thug-for-hire with a fancy job title, because neither this film nor the comics really know what a "mercenary" is; although a handy rule of thumb is that if there's only one of you, you are not a mercenary.)  He falls in love with a prostitute named Vanessa, and they have a glorious year of sex jokes together.  But when he discovers he has cancer, he leaves Vanessa to her own devices, as he seeks out the cure promised to him by a shady super-scientific organization that's developed a technique for activating the latent mutant genes in regular joes.  It turns out the procedure is torturous, and also that the super-scientists are pure evil—represented most forcefully by their chief experimenter, Ajax, who is portrayed by a man about fifty years too young to be a mad scientist, and his henchwoman, Angel Dust, who is Gina Carano, yet gets no other martial artists to play with, only a silver CGI blob.

The result of their depredations is a Wolverine-esque mutant healing factor that blows Wade's cancer out of the water, but leaves Wade himself scarred like a burn victim.  Wade escapes from their clutches, adopts the nomme de guerre "Deadpool" in a contrivance that is shockingly elegant given that Rob Liefeld, Deadpool's creator, obviously didn't spend more than ten seconds thinking about his character's name back in 1992, and the revenge quest is on.  In the middle of all this, the X-Men Colossus (Carano's CG dance partner) and Negasonic Teenage Warhead (yes, a real character) get involved for reasons that are never quite satisfactorily explained, but that's a stupid thing to complain about, so I won't.  It all ends with a Dudley Do-right scenario that goes on at least fifteen minutes too long, as Deadpool must save the love of his life and defeat the evil Ajax.  Who will live, who will die?

Jesus, you have seen at least one of these things before, right?

Deadpool's plot exists solely to serve as a line upon which to hang Deadpool's jokes, but enough of these jokes land, either because they're actually funny (the minority of the time), or (as is more typically the case) because they are pitched with a sincere entertainer's patter by Ryan Reynolds, who—to get back to that thing about whether we still want this guy around—has, at last, redeemed himself for all his previous sins.  He's fucking great, in fact, bounding along with the kind of enthusiasm you only sometimes see in an artist who's spent this many years trying to get his passion project off the ground.  You're not just happy to watch Reynolds while you're watching Deadpool—you're happy for Reynolds while you're watching Deadpool.  This counts hugely in the film's favor, and, if the opening night crowd in Pittsburgh was any indication of Reynolds' renewed appeal, we have finally decided to welcome the Dollar Destroyer back into our hearts.

Generally speaking, the other actors here are doing fine: T.J. Miller, the best thing about Silicon Valley, is the second best thing here; whatever frailties Vanessa has as a character in Deadpool, Morena Baccarin still gets more to do in this dumb thing than she does on Gotham; Stefan Kapicic's Russian boy scout grows on you slowly but surely; Brianna Hildebrand doesn't obviously flub any of her lines; and Stan Lee cameos as a strip club MC, which is pretty much the definitional example of trying too damned hard, and is also probably the exact picture you'd find next to the entry on "attention-seeking behavior" in the DSM.  But then there's poor Ed Skrein, who offers something like negative charisma to the film, in the service of Ajax, presumably named such because The Absolute Nadir of Comic Book Film Supervillainy takes too long to say.  He's just so godawful boring, both on the page and in Skrein's single-minded interpretation of him, that he actively harms the movie whenever he's on screen.  The only good part about him is Reynolds' execution of an impossibly childish running joke about his real name, Francis.  And the only time anything else funny accrues to his character is in the opening credits sequence, where he is credited as "A British Villain."

That opening credits sequence—though it almost winds up an annoyance in the context of the whole film—is the kind of amazing business that you really wish Deadpool got up to a lot more often.  It's a frozen CGI sculpture, which the nonexistent camera tracks through at its leisure, as a humorously ironic song rises up on the soundtrack and the various players are conspicuously not named, instead referred to by their generic function or their one-note tropic characterization.  It promises a kind of genuine weirdness, or at least subversiveness, that never really goes anywhere in the end.  And you get the feeling that director Tim Miller knows it, too, even if he doesn't quite care, and Deadpool often feints toward the kind of movie I wish Miller had actually made: there's a bit where actual hand-drawn cartoon characters start crawling around the frame, and for a long, pregnant moment, you feel Deadpool come so close to blossoming into the genre-busting classic that I suspect everybody watching would have enjoyed very, very much—and, then, like it never happened, the moment's just gone, replaced with the oppressive ongoing dullness of Deadpool's actual climax, concluded with its even more formulaic denouement.

Yet there's so many gags here, quite enough to drown the lousy action content like the unwanted baby it is.  "Quantity has a quality all its own," as Colossus might say, assuming he were still being written as a Stalin-quoting commie caricature—which, sadly, he is not, though God knows that the sense of humor of Deadpool's writers remains a terrifyingly mercurial thing, "timeless" only in the sense that it ranges through about forty years of random-ass pop culture callbacks, from Weird Science to emoji turds.  (Perhaps not coincidentally, Ryan Reynolds will turn 40 this autumn.)  At its very best, though, Deadpool is a crass, nasty kick to the funnybone: inventing a brand new kind of masturbation joke is no mean feat for any film made in 2016, and perhaps Deadpool is worth respecting for that towering achievement above all.