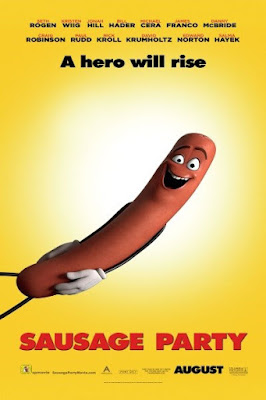 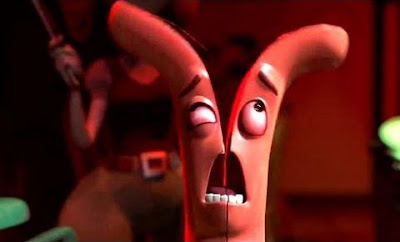 So: was This Is the End actually too good?  Maybe it was, because ever since then, I've been waiting for Seth Rogen and Evan Goldberg, by way of their writing-and-occasionally-directing partnership, to deliver at least one more film that operates anywhere close to the same level: a concept that high; comedy that funny; satire that sharp.  Hell, that movie somehow even manages to bury within itself a shockingly effective story of a broken bromance, too, filling all the nooks and crannies between the cum jokes, CGI demons, and general disrespect to Protestant theology with a tale of a damaged friendship that (somehow) retains the power to genuinely touch your heart.

Anyway, The Interview, their controversial-in-North-Korea follow-up, was not that film.  Maybe The Night Before was, but I really doubt it, and I didn't see it, anyway, because it wasn't high concept enough, and I'm afraid that this ass isn't likely to sit still for a story that can be at least one-third summed up, "once, there was this guy who had the nerve to be Jewish, on Christmas."

But now comes Rogen and Goldberg's (and Jonah Hill's!) Sausage Party, and its concept is tantalizingly high—what if our food had feelings?—promising, at the very least, an amusing parody of Toy Story where the word "fuck" gets thrown around, all while the film's consumable characters die in enjoyably grotesque ways at the hands and in the mouths of a bunch of uncaring human beings.  (It is, of course, animated; and, perhaps needless to say, the duo have not returned to directing, leaving that duty in the reasonably capable hands of animation veterans Greg Tiernan and Conrad Vernon, although if you look up what the pair have actually done—a zillion Thomas the Tank Engine shorts and the sequel to Shrek, respectively—it won't necessarily instill any great confidence in their abilities.  And yet it turns out that Sausage Party is a pretty good work of mid-level animation, with a few sequences that are—presumably, anyway—more inspired than anything the anthropomorphic rail transportation network of rural Great Britain ever got up to.) 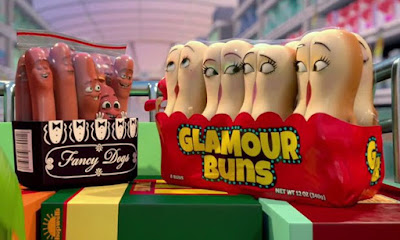 It turns out, at least, that Sausage Party shares one key component with This Is the End: like that film it's a religious satire—if "satire" is even the right word for a film that essentially argues the case for raging nihilism as a replacement for religious sentiment.  It walks that abrasive argument back only to extent that it cautions those who have embraced an atheistic worldview not to be a huge cock about it.  With what seems like a much broader target (all faith, versus a specific brand of Protestantism), it's not nearly as successful.  But that's not the exact same thing as being unsuccessful, and it's fair to say that the film's "yes, God is dead, but don't be such a smug asshole" attitude is nearly the best thing Sausage Party has going for it—right after the apparently endless ways that its screenwriters can cram crass gags and glorious murder into their movie about talking foodstuffs.  I mean, a comedy's gotta be funny, and Sausage Party is funny.

But then (and you know there's going to be a "but then"), while those drugs-and-biological-functions jokes are an essential part, they're also the worst part.  Or, at least, they're the most disappointing, since collectively they form the physical manifestation of Sausage Party's 100% deliberate abandonment of that thing we like to "ambition."  As probably doesn't even need to be pointed out, the go-to subject for comedy in Sausage Party is the weird sex joke, and the film would seem to be, in effect, a feature length metaphor about a hot dog trying to do what hot dogs do, which is insert its phallus into the warm sheath of a willing bun.  Except it's not a metaphor, and Sausage Party doesn't even let it be a metaphor for more than about five full minutes of screentime, before the characters point out, in a song-and-dance number, that they're not so ignorant of our own penis-in-vagina follies as they might at first appear.  No, sir: these things want to fuck.

And it's in this way that we get this film's other worst thing, namely its stumbles into horrifically on-the-nose character design, by which I obviously mean Brenda.  Brenda's a hot dog bun.  Brenda is, therefore, already a vagina.  But because we are apparently fucking idiots, she—this hot dog bun—has breasts.  And lipstick.  That mimicks a vagina.  And which is the orifice from which she speaks.  Why not give the hot dogs a fucking glans and a sack, and be done with it?  (Meanwhile, the talking lesbian taco?  Doesn't have tits.)

Oh, to be sure, this picture is all about really upsetting character design—the Douche is an out-and-out monstrosity—and, speaking frankly, "upsetting character design" is one of Sausage Party's single greatest strengths.  But what to do with a lack of consistency this appalling?  Being lazy hasn't meant being edgy since junior fucking high.  Nor has being stupid.  Being clever, meanwhile, means never even having to say you're sorry; but being clever, I guess, was just a little too damn hard.

...I digress.  The point is that, as soon as they are able, our screenwriters unsubtly recalibrate the difficulty curve involved in making 100 minutes' worth of double entendres actually funny, and they do so through the simple and somewhat lame expedient of just making it numbingly literal.  And so, if Sausage Party were still the best possible version of itself it could be—and, arguably, it is—the "best version of itself" was still never going to be great.  (And that remains completely true, even if it does end up with a twist on the disfavored trope of the "Dance Party Ending" that's perhaps as excellent a piece of full-bore parody as this whole year will see.)

Once upon a time, in a grocery known as Shopwell's, a talking sausage named Frank and a talking hot dog bun named Brenda eagerly await the day that hungry humans will purchase them, open their packaging, and stick the former inside the latter; more broadly, this is what all the foodstuffs on sale at Shopwell's dream about, and they worship the humans who come into the store as gods, and villify the store's manager (who is sometimes forced to throw them away) as a dark lord.  But, on the day that they would be purchased, Frank and Brenda are accidentally dropped, along with the Douche, who naturally started the whole kerfluffle, and Sammy Bagel Jr. (a bagel) and Kareem Abdul Lavash (a lavash).  The Douche, injured, vanishes into the darkness, though signs indicate that he'll be back, eager for revenge; the other four must trek through the store in an attempt to try to get their butts sold, so they can fulfill their destiny.  Unfortunately, in the process, Frank learns the truth about their destiny from the immortal non-perishables, around the same time his sausage buddies are learning it firsthand, from their "god" herself: their religion was made up in order to make their lives bearable, and the only things waiting for them on "the other side" they keep talking about are only death, death, and more death. 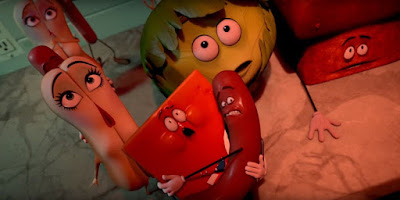 No one ever discusses when the souls of the individual sausages are implanted.  But here's my question: is it before or after the pig bleeds its last drop?

Frank is now possessed of an urgent, obsessive need to find the proof of the non-perishables claims; Brenda can't countenance such a dark possibility, and clings ever-more-stridently to her faith; and that Douche is still out there, plotting.  Can Frank enlighten these savage idiots, or is his militant atheism too obnoxious for his message to be heard?  Meanwhile, can the Jew food and the Arab food find a solution to their neverending struggle over an aisle split down the middle?  Yes, this movie has the dumbest Israeli-Palestinian metaphor ever dropped, but, you know, at least this one stays a metaphor.

(Oh, right: Sausage Party's other comedic mode, besides its hyperdirect allusions to penetration, is some very old-school ethnic stereotyping.  Yet I found it innocent enough to be fun: every last character is some kind of turned-to-11 stereotype, from an Indian bottle of Firewater, to an Irish potato, down to our heroes themselves, a white American hot dog and bun.  Of course, one of these things is not like the other, and that's the Twinkie named Twink.  Guess what he's a stereotype of?  Nonetheless, it never comes off as terribly mean-spirited—though if there were a list of foods that self-avowed twinks didn't eat, I'm reasonably sure that "gross mounds of fattening cake" would probably be on it.)

Well, as sloppily-written as it very clearly was, Sausage Party nevertheless gets by well enough on its humor—I mean, these guys haven't lost their ability to write a good cum-and-marijuana joke, nor have the laundry list of famous performers who cameo in this film lost their ability to deliver one.  (Indeed, if you told me that the film only actually exists because Seth Rogen heard Ed Norton's awe-inspiring Woody Allen impression at a party, and determined that he would put it before the People, well, I'd believe you, even though I'd know it was a lie.)

But, honestly, Sausage Party gets by a whole lot more on the balls-out grand guignol of its kill scenes.  These moments, where the film crosses the line into horror-comedy (on occasion, just straight-up horror, period), are not just its most unique and most formally interesting moments as a piece of animation—for my money, they're also its funniest.  By far.  (My favorite death, I'd wager, is what happens to the banana.)  It's exactly what we came to see, and, in its sheer commitment to the slaughter, it's more wonderful than you honestly had any right to expect.  This is still true, even though you'll dearly, dearly wish that the scene that homages Saving Private Ryan did not see fit to embroider the noise of artillery (and fucking airplanes) onto the borders of its obnoxiously try-hard soundscape.

Still, that's what determines whether this movie's for you: would you like to see anthropomorphized food get massacred, and smashed, and sliced, and eaten alive, in a grotesque hard-R context that lets their deaths land with the horror-comedy impact the scenes deserve?  If so, do you also generally enjoy the comedy stylings of Seth Rogen, Evan Goldberg, and their buds, even if they are completely dedicated to not taxing themselves too hard on this one, or really even stretching their funnybones in the slightest way?  And, finally, are you not going to be too badly offended by a Stephen Hawking analogue made out of gum, even though you totally ought to be?  If these questions don't put you off, then, yeah, check this sumbitch out.  Judged against the really, really delightful thing it could've been, it doesn't measure up.  But on its merits, it's alright.