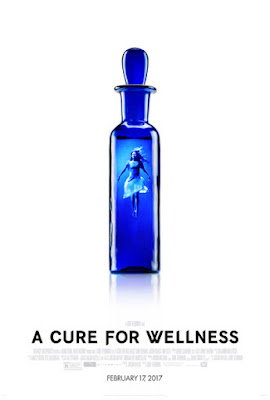 A CURE FOR WELLNESS

As with much of Verbinski's latterday live-action output, it seems, there's a theoretical 90 minute cut of this that's probably pretty great.  But what I actually watched sure as hell wasn't. 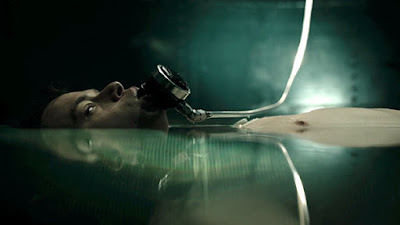 A few years ago, I reviewed Gore Verbinski's American remake of The Ring, and, in so doing, had cause to allude to Verbinski's two-and-a-half-hour long, quarter-of-a-billion-dollar, CGI-drunk reimagination of The Lone Ranger.  Following that film's infamous failure, I predicted that Verbinski might do best to retrench into a niche he actually seemed genuinely talented in, namely, green-drenched horror.  Well, what do you know?  The director actually took my advice—and this time he even upped the ante, to R-rated green-drenched horror.  Seems like I should be impressed, and even gratified, doesn't it?

But the truth is, as far as I'm concerned, Verbinski deserves whatever he gets—because with his new film, A Cure For Wellness, he's made me look like a complete fool for ever thinking that he'd found a new way forward.  (But yes: the dashing of hopes has a lot to do with my visceral reaction to Cure.  To my great chagrin, I don't think there was any other movie this season I wanted to see more—and when you're talking about 2017, that's actually saying something for once, considering that it must be the most exciting late winter for film in living memory.)  Unfortunately, however, everything you've no doubt already heard about Cure is absolutely true: it is one astonishing drag, to the point where you can't even care about the few things it manages to do well.

And it does do one thing exceedingly well—and that's be an oppressively-expensive and exceedingly well-manicured piece of proper Gothic horror, such as we only get every once in a blue moon.  The bulk of Cure's action takes place in one elaborately white-on-white Alpine spa—punched up from time to time by violent reds and aquamarine blues and so many, many sickly greens—and every brick and every tile of the place combine to form a rather extraordinary cinematic prison.  So, whatever else you want to say, Verbinski has marshaled his production designer Eve Stewart and his cinematographer Bojan Bazelli toward the creation of a host of stunningly gorgeous horror tableaux; and, for the most part, Verbinski's own eye doesn't even waste their efforts.  Stewart's work in the past has focused on historical recreation. both quotidian and half-fantasized (she did The King's Speech, The Danish Girl, and the 2012 adaptation of Les Mis), and, clearly, she's doing pretty much the exact same thing here, since even though Cure takes place in the mid-2010s, the only marker of that for the most of the film's running time is the cellphone our hero keeps trying and failing to use.  A character even remarks early on, "Who 'takes the waters' in the 21st century?"  Yes, that also means, sadly enough, that self-deprecating its own premise is the kind of thing that passes for wit here; and yet he does have a point.  Once we arrive at our destination, Cure could be happening in the 2010s, or it could be happening in the 1920s.  In fact, it would probably be slightly better if had. 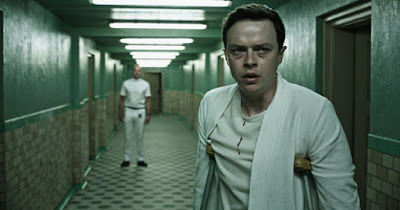 It's certainly not happening in both, though, despite Verbinski's surpassingly obvious goal, which is to do a Shining.  (Clearly, he does not succeed.)

Meanwhile, Bazelli's not just returning from Verbinski's ill-starred Lone Ranger, and I doubt the result of that collaboration is what kept the two working together on a follow-up.  You see, Bazelli was also the champion who shot The Ring for Verbinski, all those years ago, and it had remained, by a huge and almost depressing margin, the best-looking thing the cinematographer had ever done—that is, until this.  But let's stop, before we go too far. The Ring is still better-looking.  Frankly, the margin is even still pretty huge.  But at least it doesn't make you sad anymore.

The point is, Cure is exacting in its aesthetic, and exceedingly well-appointed, and it usually looks and feels exactly what it should look and feel like, routinely offering up compelling imagery from start to finish: a cyclopean pan across a black graveyard of office towers in New York, or a somehow-creepy reflection of the Alps upon a banking train, both seen in the film's prologue; and it keeps going, right up until the climax, involving an ethereal procession of white-clad zealots winding up a staircase, their candles their only defense against the dark.  So: it's lovely.  A wan and clammy kind of lovely, to be sure.  But this movie does take place in an evil hospital.

The thing is, there's just so damn much of it—while Cure neglects to offer literally anything else at all.

The story is simple enough that you can still see the gaps where the interesting details were supposed to go.  We have our junior executive, only ever referred to by his surname, Lockhart, and he's in trouble.  If he can't find someone to take the fall for his firm's financial misdeeds, he's the one who'll have to pay the price.  And thus does he undertake a desperate mission to retrieve his company's CEO, Pembroke, from a long-term bout of malingering at a wellness center in Switzerland.  He fails at this task, repeatedly, but that's fair enough—Lockhart simply hasn't realized yet that he's wandered his way into a haunted castle from which there is no escape, after all.  Well, even once he finally does locate and confront his erstwhile boss, it turns out the old man has no intention of leaving.  In fact, Lockhart's not going anywhere, either, thanks to a car accident on his way back to town that snapped his femur in twain (and mutilated and killed a portentous stag in the process).  Stuck in place, Lockhart has nothing to do but to deeply plumb his hospital's several mysteries.

Our hero scoobies about on his busted leg, repeatedly proving himself to be quite slow on the uptake, but nevertheless determined to ask all the questions most of us in the audience had stopped asking an hour earlier, because we'd already figured it out.  Questions like, "What secrets does this imposing edifice hide?"  "What of its checkered history, including a Frankensteinian baron who once conducted horrific medical experiments upon the villagers?"  And, "what does young Hannah, a 'special case' according to her doting doctor, have to do with it?"

This brings you up to speed on the first half hour; the movie, of course, keeps on going for two more, and it's honestly hard to imagine how or why anyone, even Verbinski, wanted it to.  This time it feels like an actual, honest-to-God accident, even knowing that his last bloated cod-epic was too long on purpose.  (I mean, sure, The Lone Ranger's biggest single problem is still its runtime, but even that benighted movie had incident and a plot, not just an effective atmosphere that keeps leaking out of all the pinholes in its screenplay.  Just to take a hugely blatant example: Cure's script goes to extreme lengths to make sure that Lockhart and Pembroke don't have any preexisting relationship, presumably so Lockhart's mission and the two men's conversations can be as awkward and boring as possible.)

Anyway, you can probably assume that Verbinski thinks he's simply being methodical, rather than self-indulgent.   It's harder to understand how, after The Lone Ranger, Verbinski was still given enough latitude to be so wrong.  Sure, Fox only spent $40 million on it, which is chump change as far as would-be blockbusters go; but you almost get the feeling that Cure was made as some executive's cynical proof-of-concept, in order to demonstrate that giving committed filmmakers mid-range budgets was a waste of resources.  As of this writing, Cure's box office aspirations have already collapsed into deep, dark nothingness.  And you can write as many think-pieces whining about that fact as you want—but, really, when you consider the finished product, what precisely was the moviegoing public's alternative here?

Even the film's gloriously phantasmogoric imagery, effective as hell in the trailer, becomes repetitive in its course, too.  Lockhart hallucinates—or else sees something that's actually there, but really shouldn't be, most often something involving a curious plague of freshwater eels—rinse, repeat.  (Even the film itself seems to get bored of its circular plotting, and so Lockhart and Hannah mosey on down to the village, in the most unnecessary scene in a picture that's at least 30% unnecessary scenes by weight already.  Indeed, if that vaunted atmosphere could have survived the runtime, it still wasn't going to survive the leads popping off for a beer and a bite, having encounters with new characters who don't matter and who'll never even show up again.)

The last time a stumbling auteur tried his hand at old-school Gothic horror with a studio budget, we got Crimson Peak, and that was fantastic.  But del Toro (no slouch on the grand scale of self-indulgence) still managed to bring his effort in at a hair under two hours.  (Lord, even Scorsese's Gothic endeavor, Shutter Island, is somehow shorter than Cure.)  Meanwhile, as for all those actual old-school Gothic horrors—man, they're like ninety minutes.  A hundred tops.  Roger Corman would've brought the whole thing in at 85. 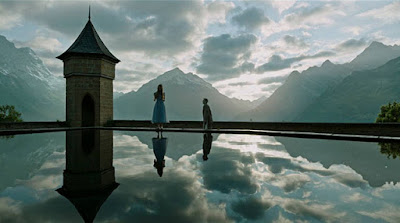 And for pennies on the dollar.

Leaving aside that we've already guessed how the film shall end by the end of the first act—hell, even leaving aside that we're essentially told how the film shall end, somewhere between three and twenty times, by the end of the second—it still doesn't help that by the time we finally do get to where we're going, there's scarcely weight to all of Cure's several disparate elements (mad science, supernatural incest, class war, mild ultraviolence, and even a raging inferno) once they're finally tied together.  Again, contrast Crimson Peak, which has a story you can genuinely care about, even if it is all cliche, all the time.

As for Cure, what it has—instead of several talented actors working their way through a shopworn paranormal romance with great skill—is Dane DeHaan's semi-boring caricature of an executive, whose quest begins with a crassly racist reference to prison rape, and really only goes downhill from there.  (Does he learn a lesson?  Surely he must!)  It lets Cure conjure up an illusion of some kind of heft—seemingly based on the beloved myth that the rich are empty and unhappy people—that it doesn't have the narrative strength to actually carry.  By the time the 130th minute rolls around, that illusion has been pretty resolutely dispelled.

At that point, all we're left with is DeHaan's sub-DiCaprian, bird-chested anger, supplemented meagerly by Mia Goth's enigmatic boilerplate and Jason Isaac's half-a-note villainy.  There's no human element to enliven any of it; no plot to speak of, that might keep the attention focused; and, eventually, Lawrence and Bazelli's minimally-hued and antiseptic hospital, no matter how well-done and evocative it seemed at first glance, stops being stunning, and starts to simply grate upon your weary eyeballs instead.  (Oh, but perhaps I'm too hard on the thing: Cure does have that outright amazing scene of full-tilt dental horror, after all—though, like so much else, this too comes out of virtually nowhere, and goes right back when it's done.)  It doesn't seem like it had to be this way.  And yet it is.

In a few months, we'll be seeing DeHaan again, in Luc Besson's Valerian and the City of a Thousand Worlds.  The connection here, besides the lead (and, you know, I like DeHaan, even if he disappoints me sometimes), is a question I wind up asking myself too damned often these days.  That question is this: "Will this director do something I actually like again, for the first time in forever?"  But I'll tell you, I am unbearably excited—because I never, ever learn.