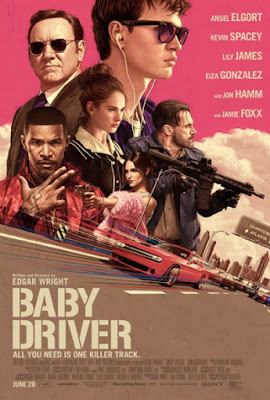 Edgar Wright returns to do what he does best these days: squander a premise.

Just having an idea for a great movie doesn't mean you've made a great movie—it doesn't even mean you've made a good movie—and despite a critical establishment that's decided to almost-unanimously forget this, that's exactly where Edgar Wright has landed with his sixth and latest feature, Baby Driver.  Thus does our Summer of Mediocrity continue; thus does Wright's own slow decay as a purveyor of entertainment abide.

The great idea at the heart of Driver, of course, is contained within its hero, a formal conceit masquerading as a man.  His name, as the film is wont to repeat in the mistaken belief that it is amusing, is Baby.  A street racer of great ability—and a Han Solo cosplayer of mild effort—Baby arrives with an especially promising hook.  It takes the form of his singular disability, a crippling case of tinnitus that struck him down in childhood, thanks to his parents' decision to turn their family wagon into a convertible by way of running it into the back of a semi.  Now, when Baby drives—when he does anything, if he can help it—he keeps his damaged ears plugged into his various vintage iPods, each of which contains a playlist of his favorite songs, which he keeps turned up so as to drown out the ringing that comes close to deafening him.  And around these songs does Baby's whole movie-movie universe revolve.

That's the theory behind it, anyway, and when Wright's actually sticking to his program, it works rather well.  (It would work, I suppose, astonishingly well for someone who shared young Baby's suspiciously-nostalgic taste for the B-side non-hits of forty years ago—though it turns out, with some exceptions here and there, that I do not.)  Regardless, what Driver offers—and, again, this is high-theoretically—is something very potentially cool: a feature-length chain of car chases and foot chases and action scenes and thriller scenes, all set to the rhythms of a hi-fi hipster's record collection.  Wright's a talented director, and he knows what he's doing here, and mostly even seems to know why—and, inasmuch as Driver's a passion project that's been bouncing around his head for a couple of decades, maybe that's not a complete surprise.

As a stylistic exercise, then, there are big lumps of Driver that are effectively beyond reproach.  There's much to admire about those lumps: the razor-sharpness of the editing, which anchors the imagery to the songs with such precision that the old-hat concept of "action scenes set to music" almost feels fresh again; the cunning sound design that synchronizes diegetic noise (especially gunfire) to the soundtrack's percussive beats; the sheer practicality of Driver's car stunts, and the tactical nature of its car chases, bringing the high-flying nonsense of recent automotive cinema back down to earth.  Driver opens strong with a bank robbery that already mixes most of these intoxicating elements together; and it keeps going hard through a credits sequence that promises an experience so stylish and fun that you could be convinced that it doesn't matter what Wright used to bind it together as a narrative.

And many were thereby convinced, it seems.  They're wrong.

There is a plot to Driver, rather than just a premise, and while I could just say it's a crime-inflected car chase film and leave it there, we can be a touch more detailed: since his fateful collision years ago, Baby's gotten himself deeper and deeper into trouble, having run afoul of one of Atlanta's local kingpins, Doc, during a car-boosting gone-wrong.  For his sins (and in recognition of his talents), Baby found himself pressed into service as Doc's getaway driver.  These days, he plays chauffeur to a rogue's gallery of bank robbers, but the ones who concern us the most are the married thieves, Buddy and Darling, and the unhinged Bats.  By the time we catch up with Baby, he's right on the edge of paying off his debt and getting out.  This works out exactly as well as it ever does in crime movies, and complicating matters even further, Baby's lately pieced-together a little romance with a diner waitress by the name of Debora—or maybe it's Debra.  It depends on which of the two musical references out pair of lovebirds bat around was the accurate one.  Actually, I do know which one it is, but there's a better than 50/50 chance of the average viewer zoning out during this exchange—and this is true, even though it's only about twenty minutes into the picture (and only fifteen minutes after that first rad car chase).

It's not just the romance, but the whole thing: it is aggressively generic.  That's never been an insuperable obstacle for a movie that banks hard on style; but Driver, despite style being its point, doesn't.  In fact, it's the littler problem that Driver refuses to offer so much as one character worthy of the name.  The bigger problem is that Wright apparently wants to spend time with them anyway, filling in the blanks of his crime-movie template script with nothing but arch dialogue, the kind that would read like laugh-free parody on paper, and sounds even worse when spoken aloud.  All of it is delivered solely by placeholder people, who tend to alternate between the banal and the noxious.

Strongly representing the bland, we have Ansel Elgort as Baby himself.  He's an actor whose eyes were made to be hidden behind the sunglasses Baby often wears, but Elgort's lack of charisma or gravitas or mere consistency isn't entirely his fault.  He's pulled to and fro by a director who only ever demonstrates an extremely tenuous grip on what makes his hero tick.  (Indeed, the basic dimensions of Baby's disability wax and wane as the plot dictates; meanwhile, his personality and presentation move uneasily between bog-standard criminal sadsackery and his more interesting aspect, an underexplored Community-style Magical Autism, focused, naturally enough, upon how music and driving interact.)  Maybe worst of all, he's trapped inside a screenplay so mewlingly and counter-productively desperate to distract us from the fundamental fact of his moral turpitude that there's likely a draft of it out there where Baby somehow uses a car to rescue a cat.  But the blandest we've yet to see, and that's Lily James' Debora.  James really gets the ass-end of things here: a small child imagining a courtship between a pair of Ken and Barbie dolls would be bound to have more chemistry than her and Elgort's sub-sub-Tarantinian fumblings over the disparate ways that Beck and T. Rex spell the lady's name.  (And just how does Baby, a nerd devoted to the music of a bygone age, ever come to pronounce it "Trex"?  T. Rex is a famous band, mentioned in an even more famous Who song.  For crying out loud, it is spelled "T. Rex.")

And so we have a baseline reading for this pseudo-comedy's jokes.

The only lesson Wright appears to have taken about his less-than-legendary ability to write women is the wrong one, which is to simply give them more lines, without actually giving them anything else.  Next to Debora, even Ramona Flowers looks good; an empty symbol is still better than a yammering maguffin.  Opposed to our cardboard dreamers are, in the first instance, an unusually lost-at-sea Jamie Foxx, in the role of the film's de rigeur tedious cartoon psychopath, coming off like a community theater rendition of Trainspotting's Begbie; and, in the second, Jon Hamm, who starts out playing Buddy, a rather more gentlemanly thief, and ends up playing Christine.  (And yet, for all that I don't even like Bonnie-and-Clyde stories—and for all that they are, collectively, a very lazy, very silly riff on all those Bonnie-and-Clyde tropes—you still have to hand it to Hamm and Eiza Gonzalez, whose pair of wacky lovers come off as a damn sight more believable than Elgort and James.)  And between them all stands Kevin Spacey, and the two characters he plays: the Doc who thinks of Baby as a useful and disposable slave, and the Doc who thinks of Baby as a secretly-beloved surrogate son.  Perhaps the most unfortunate part of the film is that neither Spacey nor Wright come especially close to making these two men the same character, since, with that, Driver's last chance for emotional heft disappears.

It leaves a film with huge gaps between the parts Wright tossed off (characters, story, dialogue, costume design, pace) and the parts Wright actually cared about (chase-themed music videos), and the latter become less impressive, less engaging, and much less enjoyable once Driver becomes nothing but an exercise in waiting around for them to show up, which they rather infrequently do.  There's a seventy-minute movie inside Driver that doesn't lose anything.  That movie might've been able to justify its existence a lot more easily.  The 103 minute Driver has a harder time of it, and for no reason.  It's flabby, from its inefficient introduction of its characters (it takes two whole heists just to put together our cast) down to its several go-nowhere subplots (one would assume that Baby's penchant for recording conversations in order to sample them for his experimental music would go somewhere, anywhere, rather than just paint the character as a cretin, but one would be wrong).  The film even closes with padding, refusing to let you leave as it launches into one of the stupidest, most insulting courtroom epilogues in all film history.  It's staggering just how much dead tissue there is on these bones.

And it's a disappointing failure for a writer-director whose greatest claims to fame have always been his clever, airtight genre-elevating screenplays, his extraordinary sense of pace, and his surprisingly-deep characters.  This time, even a sense of humor is missing: the old-school Wrightisms that pop up die of loneliness, and I attended an uncomfortably silent screening, where you could feel the sucking void in the air where the laughter was presumably supposed to go.  The action scenes work, that's true enough, but even at their best, a combination of uninspired song selection, oddly-cramped car-chase cinematography, and the double-edged sword of the film's editing scheme (driven by an extrinsic rhythm, rather than storytelling clarity) conspires to keep these sequences from ever quite reaching anything full-on amazing.  And God knows: full-on amazing is what they needed to be, if redemption were to be a possibility.  Baby Driver's a movie for technicians, by a technician, and it becomes clearer and clearer that the Edgar Wright we used to call an auteur was actually named "Simon Pegg."