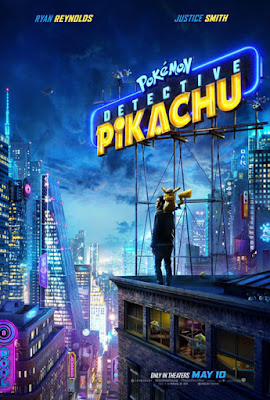 A decent-enough frivolity to waste 104 minutes with, and apparently I had more fun with it than I thought.

2019
Directed by Rob Letterman
Written by holy cow, that's a lot of people to write a Pokémon movie

Detective Pikachu—or Pokémon Detective Pikachu, if you hate colons even when they're advisable—has already hit a brick wall, and that's without even getting out of its title.  It's not the Pokémon part, nor is it the Pikachu part, and so, unless you're too dumb to be reading this, you've no doubt determined, through basic ratiocination, that the problem must be the Detective part.  And despite being whimsical and/or charming, it really is a little bit of problem, resulting in a rip-off of a very specific and much better movie (Who Framed Roger Rabbit) while dishonorably representing that, no, it's actually an adaptation of a very specific video game released in 2016 (which for all I know may also be a rip-off of Who Framed Roger Rabbit) that already exists well to the side of the main stream of the entertainment juggernaut that is the Pokémon cross-media franchise.  Now, I am not a Pokémon fan as such, though I've found the cartoons' formula-bound and poorly-animated lousiness to be comfortably entertaining any time that I've bothered watching them; hence, even without any particular fandom, I'm as perplexed as you are by the decision to make a first American Pokémon movie that isn't about Ash Ketchum.

Nevertheless, the most famous thing about the franchise is, after all, the most famous thing about the franchise—that is, twenty-odd years ago, the video game Pokémon Red and Green was designed without any apparent anticipation of a sprawling universe being built around it, and therefore no one cared that it was premised on the enslavement of colorful animals for the pleasure of watching them fight each other, which has been the foundation of the narrative ever since.  And while I'm genuinely sympathetic to the reality that telling any kind of palatable story with the Pokémon concept that doesn't wind up immediately burdened with either a lot of unfortunate implications or a heap of horrible allegory obliges you to do something—anything—else with it, once you abandon that core identity what you're left with are a bunch of arbitrary choices, and they can get very arbitrary indeed.  For example: Pikachu, the cat-rat-dog thunder-god that is the most iconic of all pocket monsters, becoming 1)a detective who is 2)voiced by Ryan Reynolds of all people, in a register that was inevitably going to be described as "Deadpool Lite."

That's not totally fair, to either the movie or to the actor (the cinematic version of Deadpool Full Flavor is just Ryan Reynolds in the first place).  And, thankfully, "Deadpool Lite" turns out to have the same great taste while being less nauseatingly desperate.  Partly that's because it's still pretty funny, but mostly that's because it's virtually impossible to not fall absolutely in love with the inutterably cute yellow fluffball regardless of what he's saying or what voice he's saying it in—even though there may never come a time during Detective Pikachu that it would not be more impressive and emotionally-investing if the screenplay were otherwise exactly the same, but had the electric mouse still voiced entirely (rather than just occasionally) by Ikue Otani, the returning VA who's spent over two decades packing so much personality and affect into variations on the syllables of Pikachu's name.

Regardless, Pikachu has historically been cute in any medium, and this Legendary/WB production carries that tradition straight into the future with some really great CGI.  It places this Pikachu right at the intersection of "photorealistic 3-D animation intended to be read as a physical object" and "squash-and-stretch cartooning with a side of enormous brown eyes and huggable fuzz," and that is a combination that has never been achieved in any otherwise-live-action film; in a better movie, in a movie that knew what it had, Pikachu would be considered the CG era's answer to E.T.  This isn't that movie, or even close to that movie, but even in the movie we got, he comes off as an extraordinary act of computerized character creation, especially given that Detective Pikachu is one of the (somewhat) less-expensive blockbuster offerings we've had this summer.  The only downside is that Pikachu very obviously received the vast majority of this production's affection and care: no other Pokémon looks half as good as him, and there are shots here and there where other CG objects float about a half-mile above the screen.  OK, two downsides: the other one is that this Pokémon movie has way fewer Pokémon in it than you'd expect.  Not that there aren't a lot—background elements, featured extras—but fewer nonetheless, and even Pikachu, who is at his most dynamic when he's tossing lightning around as one of the most powerful Pokémon species in competition, conveniently-enough cannot remember how to deploy any of his various electric slides until the clock runs out, the budget kicks in, and, suddenly, he can.

Which brings us to the actual story of the film.  This involves Tim (Justice Smith), a young man of somewhere between 10 and 30 years of age, depending on the precise emotional requirements of the scene, who's been afflicted with a fearsome case of the daddy issues due to his father, a Ryme City detective, being too busy solving crimes to have raised his child.  This is why Tim seems to barely care when he learns his father's been murdered, and his reaction to the work of tying up his father's affairs is mostly sighing annoyance.  But Tim can't dispense with his complicated feelings that easily, for when he arrives at his father's apartment, he finds someone else rooting through the place: a Pikachu (Reynolds), who had been his late father's partner on the Ryme City police force.

And here we go, since that obviously needs unpacking: Ryme City's odd approach to the Pokémon phenomenon is the result of a grand experiment undertaken by its leading light, Howard Clifford (Bill Nighy), a paraplegic billionaire who had Pokémon battles outlawed and sought to turn his city into a utopia based on the principle of human-Pokémon cooperation—making them into something more than pets, and almost people—for the simple reason that Detective Pikachu cannot exist without its premise.  This is fair enough, but, in practice, what this means is that almost every single scene demands the constant re-acceptance of every detail of all the illogical and freakishly-unacceptable world-building which Clifford's project represents, while also marking the wheelchair-bound integrationist as the film's very-very-very obvious villain.  (Conceivably, it could be his bitter son instead (Chris Geere); but you kind of know it's not.)

In the meantime, this Detective Pikachu came out of whatever happened to his partner with a bout of amnesia, and while the Pokémon of Ryme City do still only speak in their usual manner—saying their name over and over, in various ways—Tim's exposure to some strange vials full of purple gas in his dad's desk has gifted him alone with the ability to understand what "pika pika" actually means, in English.  These vials have something to do with a story that junior reporter Lucy Stevens (Kathryn Newton) and her Psyduck companion have been chasing down, and ultimately the four of them are all going to have to team up to find out what this has to do with the god-tier Frankenstein Pokémon, Mewtwo (Rina Hoshino), and the explosive escape from a creepy genetics lab we saw Mewtwo make, back in the film's prologue.

It's all twisty enough, and honestly I don't really have anything against the story itself, especially given that it gets massively better as it goes along, leaning into some of the weirdest shit that any blockbuster has managed in a while. (Despite being signposted so clearly, the ultimate reveals actually got me because they're just that stupid-brilliant; meanwhile, the motives behind the ultimate villain are the best kind of bugnuts insanity.)  The storytelling, on the other hand... well.  Director Rob Letterman (also one of the film's zillion screenwriters) did better the last time he took on a preexisting stable of visually-bizarre characters translated into CG models; his adaptation of Goosebumps, for its flaws, is still a pretty great kid's horror-adventure film, and while it speaks to the cinematic aridity of 2015 that it made my top ten for that year, time hasn't convinced me it doesn't belong there.  Goosebumps, though, benefited from far superior characters as well as a reasonably inspired approach—basically, a snarky In the Mouth of Madness for children.  As noted, Detective Pikachu is Who Framed Roger Rabbit for children, and therefore kind of redundant.  Detective Pikachu comes like it wants to be a noir parody, but it doesn't even know where to start.  It's seemingly aware of the concept of "noir" solely through other noir parodies, ones that were really for children (the production designer and cinematographer are only aware of it through foggy memories of Blade Runner), and it has a tendency to get "noir" confused with the vaguest possible idea of "1940s cinema generally," which is why Lucy is introduced with Newton doing her best (very bad) impression of a Howard Hawks lady reporter, only for the rapid-fire delivery and archaic language to be dropped literally within two minutes of her introduction, as if Letterman had an inkling it wasn't working out.  None of this is likely to land, and much of it does not: a particular interrogation scene is darkly amusing, and almost feels like it came out of different movie.

It's better as a sci-fi thriller—when their investigations bring them to a "Torterra garden," and winds up in an Inceptiony survival setpiece, it's probably the coolest scene in the movie, despite coming from (essentially) nowhere and going right back there—though it's never much good as the hero's journey it wants to be most of all, with Smith only rarely managing to even hide his awareness of his character's nature as a placeholder.

It is pretty okay as genial comedy, however, drawing gentle laughs from the capabilities and personalities of the various Pokémon they meet,  Lucy's neurotic Psyduck and its stress-induced psionic explosions being the most successfully funny.  (This is as good a time as any to point out that the decades-spanning franchise is not uniform in design quality.  There are four or five Pokémon that are "iconic," and many more that are perfectly pleasant to look at, or otherwise deliberately unpleasant, cf. Detective Pikachu's horror movie-ready Ditto, but also a lot that either barely make sense—a "Mr. Mime"—or are just lazy to the point of being hilarious.  It has nothing to do with this movie, but I want to get it off my chest: a Pidove is a pigeon crossed with a dove?  Motherfucker, a pigeon is already a dove.)  Even so, a lot of Detective Pikachu's pleasures are bound up in seeing how they translate these fascinating little cartoon notions into a "live-action" film.  It is perhaps only a garbage bag full of cute stuffed animals, covered with the coffee grounds of a failed noir and smeared with the technicaly-edible pizza slice of a reasonably-acceptable sci-fi plot—but, damn, it kind of, sort of, works.