An old man and the sea 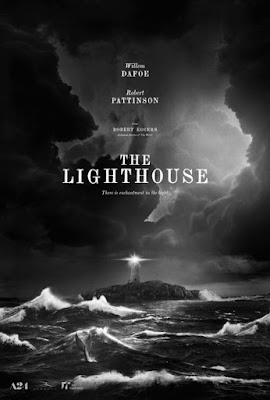 Psychohorror with a vintage twist, The Lighthouse transfixes effortlessly—which is a sign of how artful it is, since no movie this hypnotic and controlled was likely to have been "effortless" at all.

2019
Written and directed by Robert Eggers 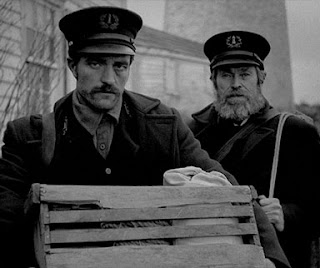 Robert Eggers seems to be asking the question, "Can a man make a career out of period-piece art horror?", and the answer that the market seems to be giving (with the appropriate upward inflection) is, "Apparently, yes?"  And so we have here the case of his sophomore film, The Lighthouse, follow-up to The Witch, the latter being what would happen if the Pilgrims had made horror movies, and the former being... well, not more, not less, but a little different, and not exactly what would happen if 19th century Maine-based seafarers had made horror movies, though that would not be the most inaccurate way to describe it, and would not be completely out of line with what Eggers obviously intends.

The most obvious thing about The Lighthouse is, of course, the way it most objectively differs from The Witch: while The Witch played about with natural light cinematography (a rewatch suggests that it probably did so less than I thought at the time in 2015) and imagery that hearkened back to old books about witchcraft and the like, The Lighthouse pushes further and presents itself as a film as close to the form of photographic recording technology of its period (around 1900) as it dares, which in practice obviously means "1940 is kind of like 1900, in that few people who were around in either year are still alive today, and both were in black and white," albeit with a curious aspect ratio that no normal viewer (i.e., me) would eyeball as anything but Academy, but turns out to be 1.19:1, a ratio used for only a little while in the late 20s and early 30s, when they turned over part of the filmstrip to sound recording without actually enlarging the medium.  I'm fairly convinced that the ratio is only in service to the film's pretense toward the archaic—an aesthetically successful pretense, don't get me wrong! even if only one or two shots convincingly replicate the soft focus of old photographs (which itself may just be a sign of age), though one, with Robert Pattinson and Willem Dafoe staring nearly directly at the camera almost as if they are aware of it, but confused by it, does a great deal of work on every other shot's behalf.  Still, most of The Lighthouse is, for lack of a better word, too sophisticated or even just too good to truly persuade as legitimately old.  (That is, its reproduction is too crisp, and its camera is far, far too mobile—there is never the sense that the camera takes up appreciable space or contains appreciable mass, which is the hallmark of silent cinema no neo-silent film I'm aware of attempts to replicate.)

But, of course, The Lighthouse is as far from from a "neo-silent film" as you could get while still visually resembling one, and it's barely possible that its peculiar ratio points in the direction of the second-most obvious thing about it, which is, in its way, more terrifically overbearing than its stark, fairly high-contrast photography, and more omnipresent than its horrific imagery or even its all-consuming performances.  And that, of course, is sound, starting with a score that begins to be confounded with the diegetic sound design almost the very instant the movie itself begins, the nervous horror strings in combat with the chugging machinery of a boat, the crash of waves, and especially the bellow of a distant foghorn, which is located on the boat's island destination, and which will be a constant companion throughout the film, alongside thrashing rain and the caws of gulls that are almost indistinguishable from the laughter of an imp.  Mark Korven provided the "music"—though I don't know where he'd be without Mariusz Glabinski, Felipe Messeder, and the rest of the sound department—and The Lighthouse finds an anxious, unsettling rhythm in every nook and cranny of its soundscape.  The foghorn and water and gulls will be joined by more machinery, the electronic shrieks of monsters,  and, above all, the angry monologues of angry men.  It's a film driven by rhythm and repeated pattern, like the sweep of the lighthouse lantern itself, and it hopes to draw you in, but also to drive you a little mad.

I don't know if it did that, but it's an earnest depiction of briny madness.  The plot, in case that was a concern, involves a young man (Pattinson)—the esteem in which Eggers holds his movie's "plot" is demonstrated by the fact that we learn this man calls himself Ephraim Winslow no earlier than forty-five minutes into the film—who arrives upon a remote island off the Atlantic seaboard in pursuit of a new vocation for himself, as a lighthouse keeper's assistant.  The current keeper, Tom (Dafoe), is inhospitable, and sees Ephraim chiefly as a source of captive labor—I think we see Tom do about fifteen or maybe even twenty seconds of actual, onscreen work, and it is done with deep reluctance—and therefore Tom loads Ephraim with every possible and more than one impossible menial chore, mocking him for shiftlessness and ineptitude as he does so.  Meanwhile, the most sacred duty of the island, watching over the flame in the tower, he keeps all to himself.  At night, they drink.

Add to that "and then Ephraim starts having dreams and daylight hallucinations, which he has an increasingly hard time separating from reality, and then there is a storm that strands them, and then an inevitable violent denouement," and you have The Lighthouse's "story" pretty much down; in fact, it's arguable that anytime it provides any greater specificity to its deuteragonists than Old Man and Young Man—most of which is lies anyway—The Lighthouse is wasting its time, because what it's about is capturing in a succession of fragmentary vignettes the fraught psychological states of being trapped on an island with the flatulent incarnation of everything you hate about being alive, while being gaslit, worked like a dog, fed intoxicants until you don't know up from down, and treated, depending on the hour, like either wretched garbage or a long-lost friend.

This would, however, unfairly demean the very specific actors filling the two roles: I admit to approaching The Lighthouse as something of a final challenge for Robert Pattinson, who has failed every previous one—his overcorrection from Edward Cullen to the world's most boring arthouse actor was not exactly what I'd have advised, though I suppose it's worked out for him—but since Eggers actually prefers people to enjoy his movies, I needn't have worried, and while he never demands anything especially deep from either performer, he gets solid work out of Pattinson as an emotionally-present, mustache-bearing handsome face that's capable of glaring at an old man like its owner is deciding when and how, not whether, he's going to kill him.  Dafoe, on the other hand, is absolutely the star, and Eggers recognizes that by privileging him visually, and also by heaping physical challenges upon him, to add to the impression that screaming like a R-rated, more verbose version of The Simpsons' Sea Captain is actual acting.  Which maybe it is, maybe it isn't, but God, it's a hell of a performance: besides that disgusting part where Dafoe has to deliver a curse while eating dirt (or, you know, something that looks like dirt), there are colorful monologues half a page long that I swear are single sentences and which Dafoe delivers without seeming to blink or even take a breath.

These long takes of Dafoe's gloriously craggy, bearded face are less about whatever significance is conveyed by his tirades than about the texture the noises he makes adds.  But this, of course, is true of everything in the film, the days and nights (and nightmares) all acting in concert as a single overpowering experience, the reality of which is never especially important until the end, if then.  Still, Eggers has prompted audiences by explaining that his movie is about a giant cock on an island, which it is; that it is about what men become when left to their own devices, which, yes, it clearly, denotatively is (I might describe it as a Popeye cartoon with no Olive Oyl but extra Bluto, in that it is funny enough to laugh at but also consistently genuinely threatening); that it was inspired by "The Rime of the Ancient Mariner," and I have no ability to dispute that; and that is is a retelling of the Prometheus myth, which it very blatantly is, and I somewhat wish it weren't, in that the more blatant The Lighthouse gets about being a retelling of the Prometheus myth the less weird it becomes.  It concludes by becoming, in its final shot, what amounts to a very literal, slightly fucking lazy companion illustration to the Prometheus myth, and that is vastly less interesting than every other resonance that it's crowded out in order to hone in on the equation of lighthouse with lightbringer.  (This is on top of a violent climax that essentially happens twice, for no very obvious reason, and which tends to put a drag upon the momentum that all of The Lighthouse's seemingly-aimless but increasingly-delirious snippets of fact and fantasy had built up over the previous hour and a half.)

The Lighthouse is better, and in some ways beyond reproach, when it is more inexplicable, not less; that is, when it's the chaos that a human mind has vomited out after ingesting too many vaguely-recalled allusions, too many bleak masturbatory reveries, and too many kerosene cocktails.   The ultimate value of The Lighthouse isn't in its allegory (though I suppose I might feel differently, had it pushed its visual and psychic confusion of its two leads to more intense places; this is certainly present, but oddly subdued, considering the inherent power of that particular imagery).  Rather, it's in the way the fantastic, threatening visuals of tempting Lovecraftian mermaids and evil doubles and, yes, the yearned-for light of some god in his tower, are allowed to slice through and around all the opposed scenes of human conflict and camaraderie that never quite link to one another in any sensible way, but, because we're watching a movie about them, must connect somehow.  And even when it is too boneheadedly determined to do a shot-for-shot remake of a Greek myth for its own good, there are still all the intoxicating elements that made it great in the first place: those performances, Jarin Blaschke's coruscating, otherworldly patterns of lantern light, that sound, that mesmerizing rhythm.  And so there remains the sense of dread and the lurking uncanny and a neverending horror—of a feverish dream you can't undream.