What do you do with the mad that you feel? 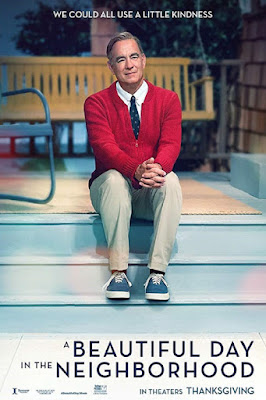 A BEAUTIFUL DAY IN THE NEIGHBORHOOD

Too good in certain limited ways to dismiss, and way too easy to forget to wholeheartedly recommend.

2019
Directed by Marielle Heller
Written by Micah Fitzerman-Blue and Noah Harpster (based on the article "Can You Say... Hero?" by Tom Junod) 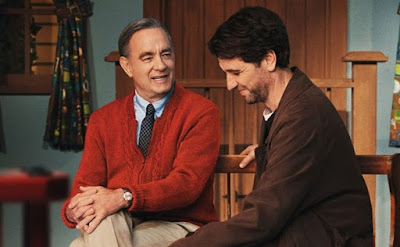 I mean, I know we're all supposed to be perfectly neutral machines about this stuff, but the fact is we all have our preconceptions and our intuitions when it comes to the movies we watch, and I went into A Beautiful Day in the Neighborhood with, at best, only a muted enthusiasm.  And this maybe needs to be explained, not least of all to me, since it was getting generally glowing reviews, and on paper it sounds pretty good even if a little bit hagiographic, and I have a far greater appetite for the genial and the nice than virtually anyone else I know.  Above all, it had a pedigree: Beautiful Day was the next movie from the highly impressive Marielle Heller, whom I know best as the maker of Can You Ever Forgive Me?, quite nearly the only gimmick-free Movie For Adults to come out in the last five years that was any good at all.*  And that movie wasn't just good, it was tolerably great.  It was also, itself, the true or true-ish story of a public figure—if perhaps a somewhat more overtly dynamic one, which is no doubt where my misgivings came from.

It's also where Beautiful Day already misleads you a little bit, anyhow: this film is a lot more the true-ish story of Esquire reporter Tom Junod, rebranded "Lloyd Vogel" (Matthew Rhys), than it is the man Junod interviewed and befriended in 1998, Fred McFeely Rogers (Tom Hanks), the iconic television personality and slim sweater model who had spent the past three decades beaming out a message of friendship and emotional intelligence from a studio not too far from where I sit now. 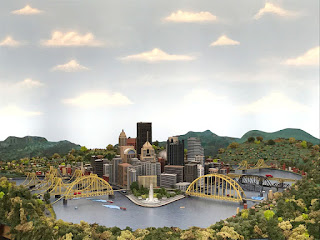 Which is all perfectly sensible, given that the story of Mr. Rogers is the reason I was confused about why a drama about him even existed: like, everybody's theoretically interesting, and Rogers moreso than almost all of us, but his life was also not necessarily the stuff of screenwriting 101—which isn't a slam, it's a testament to the way he lived and his approach to fame, to conflict, and to existing in the first place.  (No doubt some would say it's more the stuff of an incredibly successful documentary!)  Either way, it leaves our Mr. Rogers biopic with its most compelling figure left in a sidelined role, while our actual protagonist undergoes a character arc of his own that's so stale and dried-out that "screenwriting 101" would be an undeserved compliment.  And thus was my lack of excitement repaid in kind.

So the story we have here is that of Lloyd, the crabby, cynical reporter who's just been assigned to write a puff piece about Mr. Rogers in apparent response to a string of stories where he's consistently burned his interviewees, leaving the nicest person on Earth as literally the only person who's still willing to talk to him.  But before he can leave New York, NY, for Pittsburgh, PA, he attends his sister's wedding, which, to his surprise, is attended also by his father Jerry (Chris Cooper), whom he very much hates for the reasons typical to such stories of dissatisfied men.  He hates him enough, anyway, to get into an actual fistfight with him, which is how he appears before Fred Rogers with a dent in his face, and how Fred sees the scared and angry boy behind it.  And, yes, you could, without a great deal of difficulty, do a find and replace on Micah Fitzerman-Blue and Noah Harpster's screenplay using the words "church" and "television studio" and "Jesus" and "Fred Rogers," and the result would be almost exactly the same in outcome, though if Mr. Rogers is listening, I at least somewhat mean that as a good thing.

Regardless, Lloyd is mighty damn dull and it is no surprise to learn that none of this shit ever happened to Tom Junod, partly because of the perfunctory psychology the script invests him with, and partly because its scenario revolves around an enormous amount of emotional bullying from everybody around him that always remains conspicuously unexamined because it's always the kind of bullying that accords with the message the screenplay has in mind.  Now, we can probably overlook Jerry ginning up a heart attack to get his son's attention, since presumably that wasn't on purpose for the character (though it transparently was for the screenwriters).  But Fitzerman-Blue and Harpster and even Heller herself—which surprised me, considering how cystal-clearly she perceived all of her characters' flaws in Can You Ever Forgive Me?—appear to have no clue just how badly Lloyd's wife Andrea (Susan Kelechi Watson) comes off as she undermines her spouse in favor of his father, repeatedly placing herself in situations where Lloyd will have to feel guilty for his own emotions.  (There's a bit at the hospital where Lloyd notes he has no intention of staying overnight, nominally due to his assignment but mostly because he despises his dad, and she complains that she doesn't want to stay there alone with their infant son, which is completely bizarre, given that he never asked her to and I can't imagine he even considered it.)  In any event, whenever Beautiful Day leaves the side of Mr. Rogers himself—who of course is not likely to force the issue—it carries with it an atmosphere so oppressive it unwittingly starts to raise issues it isn't remotely prepared to deal with, like the distinction between unhealthy, self-destructive forms of anger and the perfectly-justified source of one's anger, and, more to point, whether it's a good idea to make forgiveness a moral obligation regardless of how badly one's been trespassed against.

Still, that's just the boilerplate they used to frame the stuff they actually cared about, so it's probably a fool's errand to even treat it like a real story.  And the stuff they care about is the stuff we're likely to care about, particularly Tom Hanks' Fred Rogers, which was the casting coup to beat them all, though not necessarily for the reasons we've been conditioned to think: it's of course true that Hanks is one of the kindest and most whimsical men in American cinema, and so Hanks playing the kindest and most whimsical man in recent American history is an almost-too-obvious slam dunk.  But that's very rarely what you actually get in a Hanks performance, and Heller is certainly aware of this, so while the most interesting thing about Beautiful Day might be nearly its only interesting thing at all, it's very interesting indeed, this being the way that Hanks plays pretty much exactly to type, or even beyond his type, while retaining just a hint of the hardness that's been a feature of most of his significant performances, especially in the "America's dad" roles he's so prized for.  (Outside of his magical realist roles in Forrest Gump and The Terminal, where he's not even really playing humans, and perhaps what I called "Hanks unplugged" in A Hologram For the King, he's usually a fairly abrasive father figure, who comes off as "kind" almost exclusively because of the Hanks persona backing it up: consider The 'Burbs or A League of Their Own or Saving Private Ryan or The Post, or, for the apex of Hanksian duality, The Road to Perdition.)

Anyway, it's just a hint of Hanks' edge, but because he's playing Mister freaking Rogers the contrast is absolutely enormous when you do perceive it lurking behind his eyes, or underneath his voice, and it does an amount of emotional work on behalf of Fred that is incredibly gratifying and empathetic, emphasizing that "Mr. Rogers" is not exactly a "performance" in the pejorative sense of the term, but nonetheless an act of will, a constant, sometimes even disagreeable act of will.  It puts the humanity back into the saint in ways even the loveliest factoids about his life (there's a really nice oddball scene here that brings Joanne Rogers (Maryann Plunkett) and their mutual love of music into the mix with a pair of duelling pianos) never could.  And, heck, I'm sure there's room in Hanks' cabinet for a Best Supporting Actor statue.

In the meantime, though, we've got Lloyd, who is only ever particularly compelling himself as a conduit for Fred's life lessons and Hanks-Fred's own personality (this is not to blame Rhys, who's serviceable).  Heller even somewhat acknowledges this, and it's possible she found Lloyd about as rote as I did, which is the easiest way to explain a stretch in the middle that starts tacking toward Aronofskian psychodrama and Heller starts getting really formally playful, if only by insinuating that Lloyd is losing his mind (it reminded me very swiftly of Ellen Burstyn's pill-driven downward slide in Requiem For a Dream), with Lloyd inserting himself into a daylight nightmare of being a puppet-sized character in Mister Rogers' Neighborhood.  These bite-sized pieces of gonzo filmmaking come complete with jarring aspect ratio swaps, as well as an uncannily-good reproduction of lousy videotape, which itself feels so unreal and hallucinatory that in these moments Beautiful Day has the tenor of straight-up horror film.

It's mostly writing a check Heller has no intention of cashing (fortunately or unfortunately; I don't know if it was ever even a possibility, but I'd have liked to have seen Lloyd descend much further, considering this is, you know, what he's there for), and while Beautiful Day is a perfectly-pleasing piece of sound cinema (if nowhere near the audiovisual accomplishment of Can You Ever Forgive Me?), the most fun I think Heller got to have besides taunting Lloyd with a scary version of Henrietta is a bunch of scene transitions that use minimalistic Mister Rogers' Neighborhood-style models to denote the shifts from NYC to PGH, something that is very cute and also winds up slightly driven into the ground before the film's over.  (Though I think the most intriguing—and effective—moment must be a profoundly odd and spiritually-inflected minute of silence, where Fred comes exceedingly close to breaking the fourth wall inside what is otherwise a "normal" scene.)

So, yeah, it's very easy to grouse about, but A Beautiful Day in the Neighborhood is easily watchable: as featureless as it is (and as foregone in its conclusions as it is) there's nothing awful about a guy finding a modicum of grace in middle age, and the better parts (Hanks' performance and Heller's playfulness) elevate it well above merely "watchable."  But earlier today I was trying to even remember what the fourth movie I saw this past weekend actually was, and it says something about the Mr. Rogers movie that it took almost thirty full seconds to bring up a memory of something that took up a substantial portion of my day barely 72 hours ago.

*OK, that's massive hyperbole.  Columbus and The Farewell are also swell, though The Farewell arguably does have a gimmick.
Posted by Hunter Allen at 9:23 PM