An American against Paris 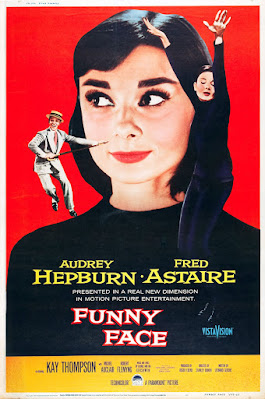 FUNNY FACE
1957
Directed by Stanley Donen
Written by Leonard Gershe
Spoiler alert: high, but it'd be your fault if you were surprised 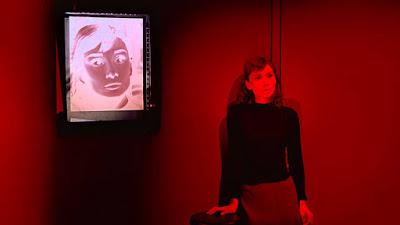 Oh, what to do with Funny Face?  The first thing not to do is impute much significance to the title it shares with the George and Ira Gershwin 1927 stage musical that helped make the career of Fred and Adele Astaire, for it shares so little else with it that I doubt you could even reconstruct how its title song ever fit into the play.  But if screenwriter Leonard Gershe discards Paul Gerard Smith and Fred Thompson's book so thoroughly that they're not even given a screen credit, and Fred Astaire plays a whole new character, then the producer of Funny Face's 1957 film "adaptation," Roger Edens, and its director, Stanley Donen, take things further still, abandoning most of the Gershwin songs that were the reason Edens bought the rights in the first place.  They use only four of them—out of fourteen!—plus "Clap Yo' Hands" from Oh, Kay!, and a sixth song, "How Long Has This Been Going On," that the Gershwins had written for Funny Face, but never used.  And then all of the movie's best songs (embedded into its best musical numbers) are the original ones anyway, four of them, written by Edens for his film.  (And it was "Edens's film," making it a bit of stealth MGM musical that, for various reasons involving its other star, Audrey Hepburn, happened to be made at Paramount.)
But since "not caring about fidelity to a 1927 musical stageplay" comes pretty naturally, that's not the cause of my consternation with Funny Face.  That comes down to a first hour and ten minutes that would be a masterpiece if only it had the decency to simply stop there, but, sadly, it's got 33 minutes left to go.  It's a painful example of a flaw common to romantic comedies (and more common still in Old Hollywood romantic comedies), that of haplessly solving every single established narrative problem too early, thus obliging itself to restart with a new slate of conflicts that it's got no idea what to do with, whereupon the story judders awkwardly through the new material before winding up exactly where we already were half an hour ago (in this case, literally the same physical location), with very little to show for the excursion.  That's maybe being too hard on it—technically, it does set up its third act, foreshadowing it frequently enough that the third character who enters the fray could even be described, with charity, as a Harry Lime-ish structuring absence (Donen introduces him in a way that suggests this was the idea)—but that doesn't keep it from feeling like a whole new, much worse movie has started.  Gershe got nominated for a screenplay Oscar, so I guess somebody thought it worked.  But then, it spends that first 70 minutes working just perfectly, a big sugary blast of whimsy and nonsense in the best tradition of the Golden Age film musical and the Hepburn romance alike. 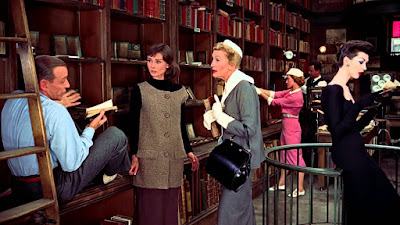 The basic scenario is counterintuitive, to say the least, and things kick off as the president of Quality magazine, Maggie Prescott (Kay Thompson), decides to create "the Quality Woman"—a face for the magazine who shall project not beauty alone, but intelligence.  The task of capturing this apparent dichotomy falls to her photographer, Dick Avery (Astaire), who finds himself unable to impose the required veneer of intellectualism upon the Patrick Nagel painting with an Outer Borough accent currently serving as his model (this is Dovima, the very first model to use a single name, born in Queens, and just terrifically generous with her self-effacing performance as a painted moron).  Maggie suggests a change of scenery, so they head down to "one of those sinister places in Greenwich Village," specifically a bookstore minded by a mousy aspiring philosopher, Jo Stockton.  Jo's having none of this, or at least she wouldn't, if she weighed more than ninety pounds and had the ability to stop it.  Instead, as the shoot proceeds, she's locked out of her own shop, and at the end only Dick remains to help her clean up.  Taking note of her offbeat looks, he decides that in this ugly duckling, he's found his Quality Woman.  This goblin, incidentally, is the Audrey Hepburn character.
Dick convinces Maggie to give Jo the job, though following a sequence of events that shades from "aggressive recruitment" to "outright kidnapping," it falls upon Dick to convince Jo to take it.  Jo likes Dick, after her fashion.  She merely finds it disappointing that he wastes his talent on fripperies like fashion—and while she's plainly protesting too much (she has a whole song about it, the aforementioned "How Long Has This Been Going On"), it's the free trip to Paris that entices her to join the Quality crew without also feeling like she's become an emptyheaded bimbo.  For, in between photo shoots, she hopes to immerse herself in the intellectual ferment of the Montmartre cafés; and, if she's lucky, she'll finally meet her philosophical idol, the founder of the woo known as "Empathicalism," one Professor Flostre (when we finally see him, Michel Auclair).
So: as far as that first seventy minutes goes, I like almost everything so much I don't even know what I like best.  (I do know what I like least: "Kiss And Make Up," one of the Gershwin songs; it gives Astaire his solo dance, and though he's lost a step at 58, he's still Fred Astaire, so "losing a step" still means he's several ahead of almost anybody else.  But for some reason a routine that began as a heartfelt apology transforms into a mock bullfight—not an unheard-of conceit, but I liked it better when Eleanor Powell did it, and not just because she was wearing tiny shorts when she did.  In Ship Ahoy, anyway, it didn't raise objections like "huh?" and "you've got the wrong country.") 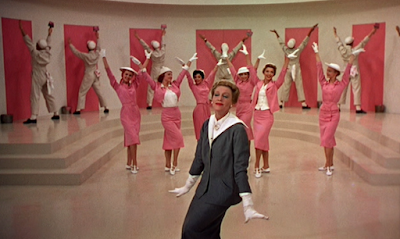 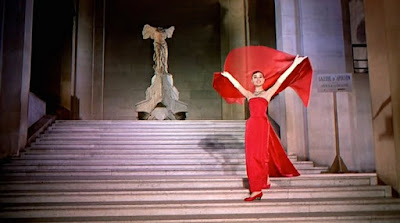 Funny Face, of course, is also about France—shamelessly so.  Another original number, "Bonjour, Paris!", satirizes the whole idea of Paris as a setting, representing an admission that its genre's love for Paris is almost always shallow (even trivializing!), so when the central trio reunite at the Eiffel Tower and announce they're "strictly tourist," this is something Donen's already conceded by giving over the number to a montage of the stars dancing across the most astoundingly glossy travelogue footage.  The deliberately-facile treatment of the city continues—and is even kicked up a notch—when Jo parades the collection she'll be wearing for Quality across a rotating backdrop of Parisian landmarks reduced to abstractions.  Again advised by Avedon, Donen has a blast with all sorts of freeze-frames and color manipulations, and of course the clothes themselves are immaculate; Edith Head designed the costumes and is likewise named on the Oscar nomination they received, but Hubert de Givenchy designed almost everything here that's extraordinary, which is to say the gown after gown that Jo is so delighted to wear.
It is very shallow, then, but then, Funny Face's argument is that if you dug any deeper you'd only wind up with hypocrisy, and the thread of the pleasant fashion industry satire gets slightly lost around this point, replaced by a satire—really, just outright mockery—of its insane caricature of the very notion of intellectualism.  Alternatively, this is the musical about Paris that hates the shit out of French people, or at least finds late-night bull sessions in a Paris café tiresome, contending that Jo's naïve to think they could possibly amount to anything.  Its mockery isn't devoid of affection at first, and the other really great number (and, yep, Edens did the music), "Basal Metabolism," represents the rare treat of Funny Face actually taking Jo's side of this argument—it is, I'd daresay, just about the only scene that takes her as she is and treats her philosophical striving with the slightest respect, because even if Dick's on hand to humorously deride it, she's the one who gets the dance sequence, and therefore, by the rules of the musical, she wins the debate.  The choreography, I understand, is Astaire's, though it's nothing like his, using the angularity of Hepburn's body to excellent effect and ribbing the pretension of modern dance without completely despising it; Donen ladles out nicely humorous grace notes and some severely garish lighting and set design that captures an idea of a smoky Parisian bar more than anything that ever actually existed.  And, as a woman who'd once wanted to be dancer, the joy Hepburn puts into the number clearly isn't Jo's alone. 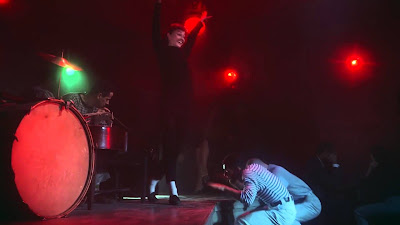 She also gets a pretty pas de duex with Astaire, when they confirm their love, and this is pure candied romance, the photography diffused almost to the point you wonder if there was something wrong with the print for the film's restoration, with Astaire and Hepburn dancing with doves amidst a sun-dappled glade behind a church.
There is no reason the film couldn't just stop here, except A-pictures usually weren't 70 minutes long in 1957, and this is where Funny Face somewhat goes off a cliff, ginning up jealousy and mean-spirited arguments and a new potential suitor for Jo in the form of her professor.  Pretty much nothing about it works, possibly because its curdled with contempt: Flostre, believe it or not (Jo won't), is a creepy, handsy horndog, though if the film thinks it's made a distinction between Dick and Flostre's respective approaches, it's not much of one.  It's a pity, really: there's no reason why a late-coming love triangle dialectic ought not work, other than Gershe and Donen's active hostility to doing anything with it besides rape farce.  It's the difference between a Funny Face that's infinitely fulfilling and the Funny Face whose last full musical number is the crappy "Clap Yo' Hands."  (Energetically-performed by Astaire and Thompson, pretending to be beatniks in order to infiltrate Flostre's lair, it's not valueless, but the song's inapposite and Donen does virtually nothing with its form.)  The problem, really, is that it demands so much compromise out of Jo as to erase her: there's some lip service that I think tries to say that Jo's new friends are willing to meet Jo partway; it comes off as devoid of substance as everything else in the movie, but not enchantingly so.
Which brings us back to our quandary: how to judge a movie with a third act this destitute?  (The denouement, another gladed dance, I will admit to liking, despite it all.)  It's a movie that effectively destroys its female lead in order to rebuild her, and even beyond the gender politics of that, it's a cheat—a refusal to grapple with Jo's character and the synthesis she's tried to make out of her deeply-held beliefs and a new lifestyle that isn't easily compatible with them, but has brought her greater happiness than they ever did.  Yet... I've watched it twice in three days.  Those first 70 minutes must be doing something so tremendously right that I simply can't find it in my heart not to love the whole thing.
Score: 8/10
*Or not.  His second wife, whom he married in 1980, was presently twelve years old.
Posted by Hunter Allen at 5:54 PM