What a disaster: Airport '37 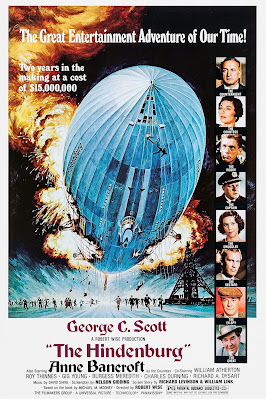 THE HINDENBURG
1975
Directed by Robert Wise
Written by Nelson Gidding, Richard Levinson, and William Link (based on the novel by Michael M. Mooney)
Spoiler alert: moderate

As with many trends, the disaster film movement of the 1970s outlasted its greatest successes by a while, and in 1975 it entered its second phase, when it was still being flushly-financed and still, to some extent, making money, but had also very clearly passed its peak.  You can argue that the 70s disaster genre was never actually "good"—bearing in mind that I won't listen to you—but the first half of the fad produced several objectively-popular, objectively-beloved films.  As for the second half, though, what isn't remembered with a sneer is barely remembered whatsoever.  Few are completely obscure—though some are, indeed, hard-to-come-by (thus, sadly, foreclosing my planned foray into the Japanese branch of 70s disaster cinema, with Japan Sinks and The Bullet Train)—but with few exceptions, the waning period of the genre is recalled as little more than an amorphous mass of undifferentiated content, and never with much fondness.
Now, this happened for all sorts of reasons: oversaturation and fatigue; the increasingly-clear limitations of the auteur, Irwin Allen, who'd carried the genre to its height; and it's certainly worth pointing out that 1975 was the year that Steven Spielberg created a new breed of blockbuster by merging New Hollywood aesthetics and thematic concerns with elemental showmanship, though (if you so desired) it wouldn't be completely inaccurate to characterize Jaws as a "disaster film" in its own right.  So it probably wasn't as simple as "they were all bad movies," and while I certainly expect numerous bad movies in the weeks to come, it's somewhat uncharted territory for me.  Even for today's film, while I have an extremely vivid childhood memory of watching a movie about a dirigible blowing up, I don't know, it could've just as easily been 1971's Zeppelin.
Nonetheless, the only major theatrical disaster film of 1975 (besides Jaws, anyhow), Universal's release of Robert Wise's production of The Hindenburg, doesn't immediately announce "this genre is dead."  It's hardly a classic, but hell, at least it's the 1970s' single best movie about rigid airships.  (I would just say "airships," but someone could conceivably point to Black Sunday.)  It's better than Zeppelin, either way, inasmuch as The Hindenburg isn't about a dumbassed Bondian scheme to steal the Magna Carta via dirigible.  You can see this represents no impossibly high bar, and that "being definitely better than Zeppelin, and possibly better than Black Sunday" is not exactly unalloyed praise.  Still, it's not not praise.
Hindenburg distinguishes itself amidst the genre entries of the 70s by being about an actual disaster—to some extent, the innovation of the 70s disaster film was coming up with fictional mass-deaths that you could enjoy as spectacle without feeling icky—but of course this places it in a bind.  Two, really: the first is that while the immolation of the Hindenburg is undeniably awesome, which is why anybody ever decided to make a movie about it, it also involved real lives, and therefore it's obliged to treat its disaster with respect and gravity, rather than, for example, the mythic comic bookiness of a Poseidon Adventure or Towering Inferno.  The irony is that both of those films come off as caring rather more about human life than this one, and the respect that Wise clearly wanted to impose upon it is at its most pronounced in the most questionable decision that he makes as a director throughout his whole movie.  As far as his film's story goes, it invents a near-disaster halfway through to make sure you don't fall asleep and which, cutely (I think), involves the Hindenburg, despite being an aircraft, almost colliding with an iceberg, not unlike another famous doomed vessel.  Meanwhile, the only historical figure who doesn't feel like somebody just plugged real names into the necessary functions aboard an airship without a whole lot of concern for the actual biographies involved is Joe Späh (Robert Clary), an entertainer who survived its crash.  (Here's where I cop to some ignorance: I'd spent my entire life under the impression that everybody died, but it turns out the Hindenburg was merely the most sensational of the airship disasters, several of which were much deadlier.  But there were numerous survivors of the Hindenburg, including, according to Wise—and far be it from me to contradict Robert Wise even if I have deep suspicions about this—the dog.)  Otherwise, most of the movie's passengers are fictional.  The hero, to be sure, is completely fictional—and even the guy based on the (speculative) prime suspect behind the Hindenburg disaster, who probably hews closer to his historical counterpart than anybody else in the film, still exists here under a fictional name.

And of course Hindenburg takes on the sabotage theory of the airship's demise, though, in fairness, it's hard to imagine bothering with any screenplay about the Hindenburg that didn't.  (This particular screenplay being based on the 1971 novel by Michael M. Mooney, in its turn based on the allegations in A.A. Hoehling's 1962 book, Who Destroyed the Hindenburg?, which led to an amusing lawsuit against Universal that held that since Hoehling had forwarded his claims as historical facts, how could he now say he owned them?)  Which brings us to that other circle that Wise's adaptation has to square, which is that almost every last character in the whole film is a Nazi.  What this means for the movie is that the Hindenburg turns out to be positively swarming with secret (and not even that secret) anti-Nazi radicals, not least our hero—a colonel in Luftwaffe Intelligence—one Franz Ritter (George C. Scott), recently returned from Spain, and harboring even graver doubts about the Hitlerite regime than he started with.
The German authorities have caught wind of a scheme to destroy the Hindenburg—a fairly easy thing to pull off due to Germany's unfortunate reliance on flammable hydrogen, something the first act reminds us of so often that it starts to feel like a message movie about the importance of helium for airship safety—and thus Ritter is dispatched to accompany the zeppelin upon its three-day journey, and root out any saboteur.  He quickly determines that the Gestapo has their own man on the case, Vogel (Roy Thinnes), posing as the Zeppelin company's photographer.  Everyone else, however, is at least a possible suspect, from Ritter's old friend, Countess Ursula von Reugen (Anne Bancroft), whose junker estate on the Baltic has been expropriated by the Nazi government, to Späh, who's recently visited the Moscow Circus and for some reason keeps making really detailed drawings of the zeppelin interior, to the American ad man, Edward Douglas (Gig Young), who keeps sending mysterious coded messages, all the way down to the Jewish family aboard, though if you doubt Ritter's dissident bona fides, he naturally has a scene where he finds out they're smuggling diamonds, and couldn't possibly give less of a shit about it.