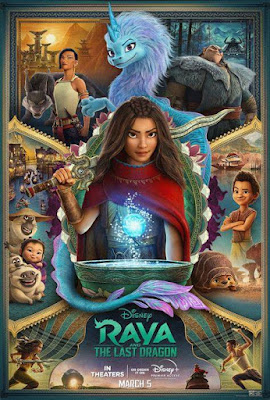 RAYA AND THE LAST DRAGON
2021
Directed by Don Hall and Carlos López Estrada
Written by Qui Nguyen, Adele Lim, and good God, so many others
Spoiler alert: moderate 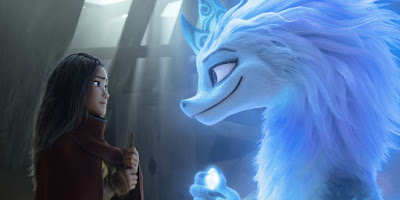 I suppose I'd like to say Raya and the Last Dragon represents an improvement over Walt Disney Animation Studios' output over the last several years, because, well, it is.  Nevertheless, it's an improvement by the smallest degree, and given that the studio's prior two films saw the greatest cartoon house on Earth move from the dysfunctional soullessness of Ralph Breaks the Internet to the dysfunctional soullessness of Frozen II, all this means is that Raya achieves the great feat of functional soullessness, and that it confirms that whatever it is we'll call this period of Disney history, we're pretty much irrevocably in a post-Second Renaissance world.
Why this happened is opaque to me.  "Disney history," obviously, is something that interests me greatly, but for all that there were reasonably clear explanations for the studio's previous downshifts in quality—Michael Eisner's quixotic pursuit of the teen boy market at the turn of the century, for example; or, to go way back, the Second World War—there is not any obvious reason why WDAS turned on a dime from the run of good movies, great movies, masterpieces, and Frozen that began with 2010's Tangled (or even 2008's Bolt) to an ongoing run of movies that are, if you're lucky, watchably mediocre, which began immediately after Moana.  Sure, one can point at John Lasseter's fall from grace and his replacement at WDAS by Jennifer Lee, but truthfully we haven't even seen her creative leadership yet (Raya would be the first film she's overseen any significant part of as CCO, and, if anything, managing to finish it with only a few months' delay while overseeing WDAS's shift to remote work earns Lee a respect from me that her actual directorial and screenwriting efforts have not).  No, for unknown causes, the Lasseter regime's final projects simply haven't been very good, despite WDAS appearing to be as commercially and technically robust as ever, and with no significant personnel change otherwise that I'm aware of.  Maybe one day it'll be clearer what caused this, though I suppose being forced by the higher echelons of the corporation into doing movies that plainly never wanted to be made didn't help anything.  Either way,  Raya soars to the top of the new Disney heap by virtue of being "not terrible," and I suppose by also not being a compulsory sequel—technically "an original," even if precious little in it feels that way—and by being a movie that at least somewhat acts like it wanted to exist in the first place.  But, you know, still not all that much.
So, what we have in Raya is a full-on high fantasy, albeit not a very complex or credible one, mixing the cultures and aesthetics of a large swathe of Southeast Asia (and not to everybody's delight, in case that somehow surprises you here in A.D. 2021).  This is somewhat in the same vein as traditional high fantasy's treatment of Western Europe, or at least it's more like that than the vague white person locations that tend to form the backdrops in most Disney fantasies.  This land we've been invited to live in for 117 minutes (a worryingly long runtime for a Disney film, but in fairness a lot of them, like upwards of ten, are credits) is Kumandra.  This is a world where dragons once helped maintain a delicate agrarian utopia—but, as Raya (Kelly Marie Tran) explains to us in her opening spiel with the help of the kind of "stylized" expositional animation that was once a lot of fun and which this movie turns into a tired cliché, this was long ago.  Five centuries have passed since the arrival of the Druun, evil spirits who blighted the world, turning people and dragons alike to stone.  The last surviving dragon, Sisu (Nora "Awkwafina" Lum), was entrusted with a talisman imbued with her fellows' last remaining magic.  With this, she banished the Druun, preserving what was left of humanity but, it's said, at the cost of her own life.  Unfortunately, much of the damage was already done: afterward, the Kumandrans split into five hostile nations, each claiming a patch of their dragon-shaped continent and adopting the name analogous to each one's respective dragon part, which is how the talisman came to be safekept by the leaders of the Heart tribe, ensuring that their film's story shall be as absolutely schematic as it is humanly possible for a story to be.

Heart's current leader and Raya's father, Benja (Daniel Dae Kim), still nurses the hope of reuniting his fragmented world.  To this end he invites the leaders of Fang and Spine and Tail and Talon to a conference to hash things out, and, surprisingly, Virana (Sandra Oh), the leader of the people happy to be described as "Fang," turns out to have a villainous plan to acquire the talisman that has, in her view, granted Heart an unfair prosperity these last few hundred years.  This plan takes the form of her daughter Namaari (Gemma Chan) getting within striking distance by abusing Raya's hospitality, and it works out poorly for everybody when the resulting pell-mell of visiting dignitaries ends up with the oddly-fragile orb dropping to the floor and shattering into five pieces, one for each group, and breaking its holding spell.  This gives the Druun another chance, with the only things stopping them being the weakened magic of the five individual shards and the existence of water, the only physical thing they fear.  Raya makes it out alive.  Her father does not.
We catch up with Raya six years later, grown to womanhood, angry and sullen (hypothetically), and having spent the interval searching for Sisu, whom she hopes still exists and will help her restore her world.  As far as we're concerned, Raya finds her, like, instantly, and this would be the first structural flaw of several in a very structurally-flawed screenplay, credited to Qui Nguyen and Adele Lim for, one suspects, optical purposes, but which rests atop of the efforts of what might honestly be the largest story development team in Disney history, outnumbering the named characters in this film by at least a factor of two, and not all that much smaller than the population of Southeast Asia itself.  Tasked by all these writers with a quest to reassemble the dragons' orb, Raya and Sisu embark on a series of missions across the various lands of Kumandra to reacquire its pieces, but a grown-up Namaari is hot on their heels. 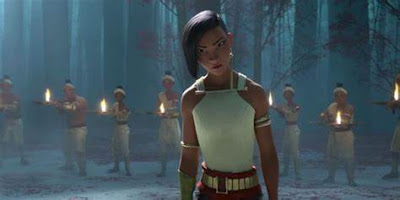 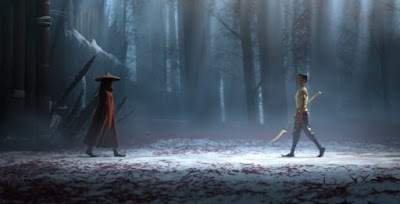 By all means, Raya's artists manage their task well, and in Sisu, they achieve some real magic, with probably the best-built animal (or whatever) character of Disney's CG era, with an intelligent application of Keanesque expressivity to an Asian dragon template, and her fuzz and fur subject to environmental factors of wind and water in ways that are intoxicatingly richly-done.  And of course she is magic, so our fuzzy, furry friend glows and breathes iridescent fog and skips across splattered raindrops in midair, a somewhat silly visual that's still full of wonderment.  (As for the human characters, Raya and Namaari are clean designs, and there's some fun business with a sequence given over to one of the comic relief characters and their monkey sidekicks, which again feels like it's tonally in a different movie entirely, but does involve some great, rubber-band-like movements in the character animation.)  As for Kumandra, while its constituent parts lack much individual visual identity, at least the world as a whole has one—probably not worth paid vacations to Asia for its designers, but I say that every time Disney animators take a trip to see things they could look up in a book.  The Druun, meanwhile, are abysmally unimaginative black clouds with glowing purple lights inside them, some of the most boring things I've ever seen in any Disney film; they're not supposed to have personality, of course, but it might've been cooler if they did.
In terms of staging all this, Raya can, occasionally, even shine.  Whenever nobody's talking, it even resembles the timelost legend it was supposed to be.  But shining does throw the rest of it into sharp relief.  It's the first Disney film to try to incorporate martial arts into its action, and probably doesn't do it enough for that to be its "thing," but there is a very remarkable scene toward the end where the montage and camera layout finally touch something epic, as the collapse of a city, ushering in the death of a whole world, is narrowed down to our villain's self-loathing fighting spirit and our hero's laser-focused desire to simply hurt her enemy while they're both still alive—which means that by far the most believable emotional register the film ever occupies is blind, violent hatred, and I'm not sure its makers noticed this.  Otherwise, Raya is a hollow experience: even when it finally gets down to business and attempts to remind you that it's a film about fear and frailty and loss and sacrifice and friendship, it is so utterly terrified that anything could have a consequence—and so openly telegraphs that nothing will—that even in the midst of its most most effortful intensities toward the end, there's not a lot here capable of generating honest feeling, and thus when somehow the layout and James Newton Howard's score and the swirling apocalyptic lightshow that apparently now ends every Disney movie, not just their Marvel ones, make you feel something anyway, you just feel misused by it.
Score: 5/10
Posted by Hunter Allen at 1:34 AM