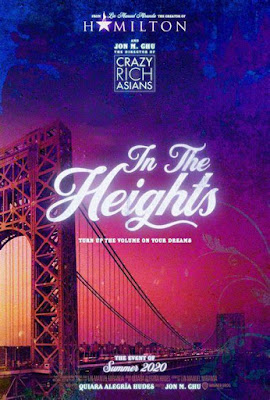 IN THE HEIGHTS
2021
Directed by John M. Chu
Written by Quiara Alegría Hudes and Lin-Manuel Miranda (based on their play)
Spoiler alert: moderate

So here we have John M. Chu's adaptation of In the Heights, and I was, more or less, looking forward to it, not least as a welcome back event for theaters.  Obstacles came up; seeing it in a theater didn't happen.  Frankly, I'm grateful I streamed it, and that something else will have the opportunity to serve as "the first movie I've seen in a theater in ____ months."  When does West Side Story come out?  "Story's" right in that movie's title, so presumably it'll have one.
That In the Heights turned out to be worth what I paid for it (or, considering the two hours and twenty-four minutes it took to watch it, rather less) is not some totally unanticipated disappointment.  I had an inkling it could be underwhelming: for starters, covid made it a part of Warner Bros. and HBOMax's astoundingly lackluster slate of "blockbusters" for 2021; that In the Heights is almost adequate already puts it closer to their best efforts for the year than their worst.  Likewise, thanks to another streaming service, I was able to see Lin-Manuel Miranda's other big stage hit, Hamilton, and that turned out to be shockingly mediocre for something so endlessly hyped.
Yet it was hard not to get excited about In the Heights anyway, considering how hugely hyped it was getting, too.  Plus it's neither sung-through nor a dweeb's self-insert adventure through history; Miranda didn't even write the play's book.  That task was taken on instead by Quiara Alegría Hudes, who's adapting herself for the film.  Besides, there's Moana, which is absurdly good, even if somebody, maybe fellow songwriters Opetaia Foa'i and Mark Mancina, maybe Ron Clements and John Musker, maybe just the ghost of Howard Ashman in the Disney machine, clearly clamped down hard on Miranda's magpie willingness to seize on completely new tempos and melodies in the middle of songs, as well as his first-draft's-the-best-draft lyrical impulses.  (I know it's never really the "first draft," but he wants you to feel like it is, which is why half his songs slide into samey-sounding slant-rhymed hip-hop written with too much brittleness and fake improvisation to come off.)  It goes without saying that Foa'i and Mancina deserved more credit for Moana than they were likely to get when Miranda was already a hugely-marketable household name, but, hey, Miranda was there.  Accordingly—and because I'd gone out of my way to not listen to the songs, or spoil myself on it—In the Heights retained some power to disappoint me, even if I'm not too surprised. 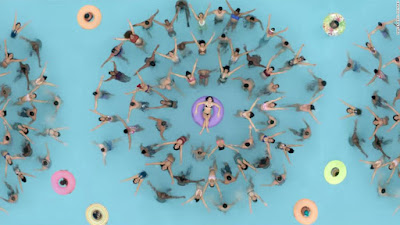 But no story, flat characters, fiat romances?  That's the film musical's bread and fucking butter, and I could probably name a dozen greats that I'd describe exactly the same way.  Yes, most that do something successful with those ingredients also have runtimes in the 90 minute range.  But the point is that it shouldn't matter, because what they're here for is to provide a scaffolding to hang some nice tunes off of while people break out into song and/or dance.  In the Heights boasts nearly an hour of songs, a high ratio for any musical.  It cheats a little to get there—it's not sung-through, but Miranda has a bad tendency to allow songs to bleed into dialogue anyway, which does violence to both—but it's still a lot of music.  The songs aren't great, though: some have energy, like "In the Heights" and "96,000" (that is, the lotto payout) and "Carnaval de Barrio," and Miranda put a lot of effort and energy into drawing together a number of different Caribbean styles and tying them together with showtune and hip-hop bows.  The result, predictably, is an anodyne melange that rarely sticks with any idea long enough to get any use out of it.  ("Pacienca y Fe" excepted—maybe.)  "Less-than-great songs" isn't even what kills In the Heights, though, and now we're finally talking about how Chu decided to put this musical on screen.
For starters, the Washington Heights neighborhood he's created doesn't feel like a block so much as it feels like three businesses across the street from one another.  (Whatever else I could say about Crazy Rich Asians—it's a "romance" where the boyfriend is like the fifth or sixth most important character—Singapore feels like a place, and its elite, a community.)  There is, of course, the distracting frequency with which this movie degenerates into a long advertisement for Tide pens, though maybe this is fair enough, since "preventing stains on people's clothing" might be the closest Usnavi and Vanessa get to a shared interest; I'm unimpressed with how, in a record-heatwave summer, the T-shirts have really cleanly-defined armpit stains like somebody carefully wet them before the shot, but nobody ever seems to sweat.  Even movie-sweat.
And as a dance-heavy musical, it doesn't invite me to catch up with his Step Ups; it feels like it hasn't learned one single lesson from any movie musical made in the last fifteen years.  Take anything that could be wrong with a movie musical from the turn of the century, and double it.  Treble it.  There are dance numbers in this film, dance numbers aplenty, their choreography wrenched gruesomely apart by montages that blast images at you like a machinegun (not necessarily montages with great continuity editing, either), with just enough iconic visuals for someone in 2021 to say "it's like a Busby Berkeley movie!"  Because it definitely is if you've never seen a motherfucking Busby Berkeley movie, and therefore don't realize that when he created giant radial patterns of people shot from overhead they went on to—you know—do stuff.  (Oh, is there an underwater shot?  It must be just like an Esther Williams aquamusical, too.)  I'd expect some of these people can dance, but they rarely get a chance to demonstrate it for more than a half-second at a time; there is more cutting in any minute of nearly any musical number in In the Heights than there is in every musical number in (to keep it in the "check out this town" subgenre) An American In Paris.  There may be more cutting in one minute of one of In the Heights' musical numbers than in every scene in An American In Paris.  More often than not, I found it kind of pummeling, and not in any kind of good way, and that's too bad, because there are good ideas—the beginning of the big part of "In the Heights" is probably also the best single shot in the movie, an "impossible" computer-assisted shot that finds the chorus reflected in the window of Usnavi's bodega as he looks out (and I appreciate that the window has been cleaned by someone who only slightly gives a shit, so you can see the squeegee streaks), and it's in part "the best shot" because it outlasts the decay of a muon.
The alternative, anyway, happens in "When the Sun Goes Down," which is deep, deep into In the Heights, and also its first foray into anything novel ("Pacienca y Fe" deploys some decent-ish metaphorical imagery, but doesn't seem to realize "on a subway train" and "inside a tunnel" force sharp limits to the visual possibilities of something that should be way more cosmic).  "When the Sun Goes Down" is essentially an extension of Astaire and Donen's "You're All the World to Me" into a digital era, which finds Benny and Nina defying gravity and dancing across walls and windows—it was heavily showcased in the trailer.  It lasts about ninety seconds, and doesn't really have a denouement.  It may be shot in longer takes because its special effects-boosted choreography suggested simpler, easier moves.  But it is more-or-less alone in the film as possessing real vision, and it's the only time I felt my heart move up in my chest.  It's not a piece of shit or anything; but I expected that to happen fifteen or twenty times, given the talk.
Score: 5/10
*The HBOMax subtitler also decided not to transcribe the Spanish parts.  I don't mean translate; I mean transcribe.  It's a landmark for representation indeed!
Posted by Hunter Allen at 9:43 PM