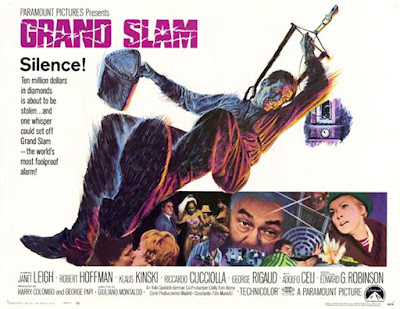 He doesn't even have a plan B with chocolates or anything.
The stalking, meanwhile, is egregious even for a 1967 film—though I did get a laugh, more at the movie than with it, that Jean-Paul's very first gambit involves 1)staging a car accident and 2)negging her with an insult to her glasses and hairdo, which eventually results in Mary Ann ditching her glasses, and, fortunately, avoiding breaking her nose on any walls or shelving.  (She also gets a more flattering hairdo, and, in fairness, Jean-Paul was right about that.)  It's not sold very well: Leigh gives it a go with her retiring 40 year old spinster routine, tempted but frightened of her own sexuality and all that, but it's difficult to perceive what's supposed to be fascinating about Hoffmann, who's a little twerpish, and moreso to us because we see the contrast with Jean-Paul's colleagues.  (There's likewise the question of whether this all makes more sense, or less sense, in light of later revelations—but I choose not to pick at it.)  And while this is only the focus and not the whole show for that first hour, it's not the only wheel Grand Slam's spinning, and things are not aided much by director Giuliano Montaldo, who reportedly did the film somewhat begrudgingly and in pursuit of money for what appear to be more "serious" projects, nearer and dearer to his heart.
This is part of why I hesitate to call it "breezy," even though this an adjective that would be almost obligatory for every other film in the 60s caper film cycle.  There's attempts at glossy exotic travelogue and some attempt at poppy style (mostly in the form of Ennio Morricone's upbeat jazzy theme, though Morricone may be in the movie less than Robinson), but all the really successful flair is almost entirely confined to Milford's mansion at the beginning (and perhaps the ocular violence of Gregg's employer's abominably ugly kitchen, a red-and-blue checkerboard thing).  And most of this is just in a single shot of some kind of burlesque strip show for a ballroom full of guests (that, weirdly, Milford isn't even attending), with the performer reflected in a series of mirrors.  It's solidly-built—and as an Italian director, Montaldo's adept enough at integrating urban stock footage, in this case of the actual Rio (New York is a different story, and owing to production realities, almost every exterior shot with Robinson involves disorienting rear projection, causing you to wonder aloud why a cosmic being unmoored from space and time needs diamonds)—but even the most frivolous glamor-shots are let down by an ocher tint bleeding through the filmstock in almost every daytime shot, which may be a factor of age or just the Kino Lorber blu-ray's presentation, but has the effect of making the film look kind of gross, scuzzy, and cheap.

The good news is that everything else works, namely Gregg and Agostino rehearsing their performance in the vault, offering just us enough specifics to be intrigued by their confidence that they can beat the machine (though we're told, explicitly, that shaving cream isn't going to work this time), all whilst Erich vibrates at some maniac frequency divorced entirely from the wavelenth everyone else is on.  "CRAZY YOUR BRAIN," he exhorts his pitiful co-conspirators, in what I assume was translated through several different languages before it got back to be dubbed into the English track by Kinski.  Kinski, in fact, essays a downright vicious little Teuton, almost single-handedly pulling Grand Slam towards "actual crime drama."  This serves the film well, since it really is more Rififi than Topkapi. It becomes increasingly apparent that it's not only Erich—our heroes are less a collection of colorful kooks than they are a gang of sociopaths.  (Jean-Paul is the only one with anything even akin to a conscience.)  Grand Slam is a grimmer movie than you'd expect and even, perhaps, grimmer than it intended to be—not ever a humorless movie, though, and it ends with a whole series of great big nihilistic belly-laughs—but whatever else Montaldo does or doesn't do, he manages to keep tight control over a film that could have easily been a complete tonal mess.
But if the first hour is clunky and slow, we are rewarded for our patience with the second, Grand Slam bifurcating itself pretty cleanly into "pre-heist" and "heist" phases, and I guess Montaldo was saving up all his style points for that, since the "heist" phase is extraordinary, cross-cutting at a nail-biting pace with ratcheting tension between Gregg and Agostino's stealthy ingress into an airlessly (paradoxically, almost deafeningly) silent bank vault and Erich's navigation of the cacophony of the Carnivale parade outside.  (This is where that location shooting actually pays off, and for an added bonus, it's nighttime so the filmstock's yellow fog doesn't follow, either.)
There are many elements to consider, and several elements of chaos that our thieves could not have considered, but even the challenges we know about ahead-of-time would make for a delightfully complicated thrill machine: the necessity of getting into the building and evading guards; the requirement to steal but also to return the key (the manner in which they are obliged to do this being captured in a superb lateral tracking shot across a busy street that winds up perhaps the single funniest visual gag in any heist film, buttoned by reaction shots from Kinski and Hoffmann on either side of it); and, of course, there is the vault alarm system itself.  Suffice it to say, some of it is brilliant in its simplicity, some of it is literal out-of-the-box thinking, but what floors me—and maybe belies his claims of jobbing—is the radical solution Montaldo and his designers arrived at for the problem of "invisible light."
The previous year's How To Steal a Million and Gambit had both posited high-tech security systems that you couldn't see (I think Asphalt Jungle did way back, too), but Grand Slam is—to the very best of my knowledge, and I dearly hope I'm right—the very first film to actually show thieves clambering across a grid of lasers.  It's a whimsical little trick done all in camera with practical effects: Gregg and Agostino have goggles that reveal the lasers to them, and in a POV shot the screen goes red; in a cut, we're transported to an entirely differently-dressed set bathed in crimson light and carved up into little boxes by the green lasers lancing through the space.  It's top-tier in concept if maybe not entirely convincing in execution (the "lasers" are glow sticks and neither "lasers" nor, more technically accurately, infrared beams, would cast green reflections on the walls like these glow sticks do), but it is so deliriously creative that for a couple of minutes Grand Slam is an original masterpiece of cinematic iconography, the rock upon which Entrapment and Ocean's 12 and so much else rests.  And even when the goggles come off, that's not the end of Gregg and Agostino's thrillingly, hilariously sisyphean struggle with the vault.
I don't want to make it sound like the heist sequence is everything—there is also the matter of some signposted but satisfying twists, and that denouement is one of the most bleakly amusing things—but that heist is amazing, and if Grand Slam is one of the most backloaded heist movies you'll ever see (and it is a genre that, by definition, will almost always be backloaded to some degree or another), at least this one is backloaded with some of the best filmmaking the genre offers.
Score: 8/10
*It's also a cute metaphor, if intentional, since the film's mastermind's master plan does, after all, entail sending four players  "home" so he can win.
Posted by Hunter Allen at 12:38 PM