To conscript a thief 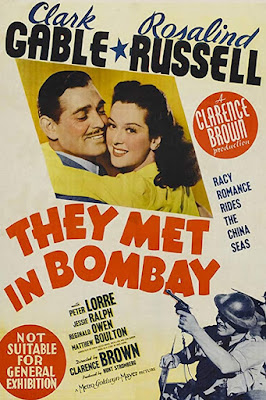 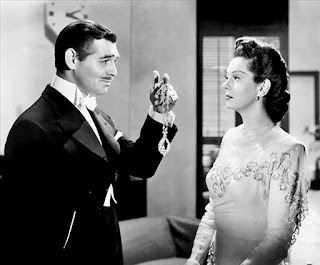 It starts off so well.  Up until the halfway point and, in truth, probably for a good spell after it, 1941's They Met In Bombay is a sterling example of one of my very favorite genres, the heist-caper flick, and more importantly for that first half it's prototyping my favorite subgenre within that genre, the heist-caper romantic comedy, that is, the kind of film that takes a pair of red-hot, effortlessly-charismatic movie stars—in this instance, Clark Gable and Rosalind Russell, maybe not my own very first choices in 1941, but absolutely two good ones, with Gable in particular sanding down his rougher edges so that his gentleman thief is indeed quite as much gentleman as thief—and places them next to one another, as either antagonists or as partners in an elaborate criminal scheme which is used, more explicitly or less explicitly, as a metaphor for courtship and sex.  So that first fifty minutes or more: maybe it's too much to call them the perfect versions of themselves, but there's perhaps not a single active flaw, and even the passive flaws, like the occasional flat joke or Peter Lorre playing a Chinese guy, are less objectionable than they easily could be.
Sometimes, though, it even is the perfect version of itself, and we start with just such a perfect scene, with director Clarence Brown introducing us to the stakes of his film by way of a bulldozingly efficient little prologue, opening on a magazine article about the so-called "Star of Asia," a diamond looted from India by Britain in the 19th century and presently on its way back albeit only around the neck of its current owner, the Duchess of Beltravers (Jessie Ralph).  The magazine has helpfully provided a life-sized photograph, from which Gerald Meldrick's (Gable's) associates have been able to produce a detailed facsimile.  Gerald cracks some wry, funny jokes about this work of craftsmanship, comparing his own plan to his accomplices' artistry, and explaining his scheme to pose as a Lloyd's insurance detective sent to India to watch over their policyholders' priceless chattel.  Upon his arrival, things go quite well—that is, until he meets a German "Baroness," Anya von Duren (Russell, whose barely-extant accent and obvious middle-class Americanness is, I think, part of the joke), who is of course just plain Anya von Duren, an orphan grown up into a ruthless confidence woman, and who has her own designs on the stone.  Gerald clocks her before she can clock him, and he wins, walking away with the real Star of Asia with the fake one in its place.  But Anya discovers the truth almost immediately, and she's right on his heels, while the police—turns out the facsimile was rather less perfect than Gerald believed—are only a step behind her. 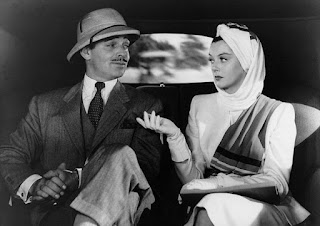 It is not at all immediately apparent that when their reluctant new partnership places them on a boat to Hong Kong and, hopefully, not prison, that the film has begun its collapse.  Nothing seems to have shifted, except Gerald has begun to grow on Anya and she's begun to thaw a bit, insofar as the "reluctance" has mostly been on her part, and Gerald's been drooling over her since the moment he laid eyes on her.
(So maybe this is even one of those passive flaws: maybe the heist romcom does better when it's the less powerful and dominant partner who gets that first spark of horniness, and since "less dominant" usually means the female half of the equation in these things, this permits them to become irresponsible heterosexual fantasies for everybody who gets off on irresponsible heretosexual fantasies, which is most folks.  Of course, it's not always strict about that: for every How To Steal a Million, which is basically a trip through the stages of Audrey Hepburn's arousal to Peter O'Toole's mastery, there's an Arabesque, which is about how Sophia Loren gave Gregory Peck a hard-on by fooling him half a dozen times in a row.  But those would be a quarter-century hence, and there was a lot of evolution to get through on the way to the genre's masterpieces, and as I have flogged my Grand Unified Theory of the Romantic Comedy Caper Film enough times over the years, I'll just leave it there.) 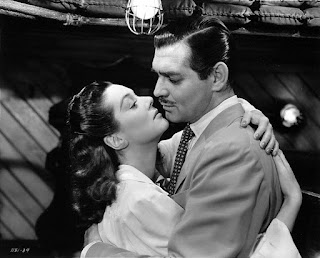 Okay, I will note that the poster sells the film on such "racy romance" that it's not even suitable for general exhibition.  Your guess is as good as mine what the hell this refers to, dear reader.  They don't even share a cabin on the boat while pretending to be married!
In either case, what we have here at the midpoint of They Met In Bombay is a perfectly-expected shift in emphasis and action, the pair conning the Chinese ship's captain, Chang (this being Lorre, who's at least only playing "the Peter Lorre character who happens to be Chinese" rather than "full-tilt yellowface caricature").  Chang quickly sees through their lies and intends on delivering them to the British authorities for the reward; and they get out of this scrape only to put themselves in an even more untenable position in a Hong Kong basement, owners of a very valuable "baby" in the form of the Star of Asia but with no way to extract that value, and so obliged to do yet another con involving Gerald impersonating a British officer and using the British Army to press some fast cash out of some poor random Hong Kongese subject.  (The ease with which Gerald turns the machinery of colonialism to his private, criminal ends is so bald-faced and goofy I'm tempted to call it "intentionally satirical.")  And even here, and now we're pretty deep into things, it's not clear that the movie's gone stale.
And yet it definitively has.  "They Met In Bombay" wasn't even the original title; originally, it was titled The Uniform, which is a terrible title for a romcom caper film—They Met In Bombay is bland but neutral—but it's not that terrible a title for what the movie winds up actually being about.
I do not want to oversell how good it was.  Structurally, it's been quite fine, and perfectly handsome, but in his second film of 1941 (the excellent Come Live With Me came out in January), it was recipient of as little personal investment as I've seen in any Brown film of the 1940s, and the things that are visually interesting about it—the unusual number of wide shots, including shots from angles that are, strictly-speaking, "unnecessary," but do demonstrate how much work went into the sets and background paintings—are more of a piece with MGM style than something really specific to Brown himself.  Even if he's obviously going to be fully competent at integrating Cedric Gibbons and company's robust production design into the proceedings here, he only occasionally seems to care, and then mostly during the "Bombay" phase of things (e.g., Gerald pitching woo at Anya in an elevator "emergency" he caused, with the pair of them suspended above a crowd in the lobby, which is reasonably impressive and inventive; and naturally, his introduction of "the Baroness" is appropriately cool).  But considering just a few years prior he'd made The Rains Came, which had exploited the rich orientalism of an Indian setting to the hilt, They Met In Bombay feels pretty wan and tossed-off, with compositions and lighting that are well-tooled enough, but also feel like anybody at MGM could've made this movie, rather than somebody whose bread and butter was romantic expressionism and who could put a transcendent erotic charge on practically anything.  Truthfully, I think Brown's interest flags completely after the boat, and I doubt he took all that much joy in staging the combat sequence. 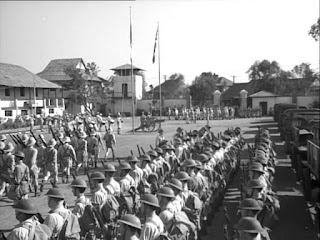 That there's a "combat sequence" finally starts to suggest where the hell this bright, funny, erotic-enough romcom caper film goes wrong.  (Or did Kelly's Heroes have loads of eroticism, and I forgot?)  The final phase reorients this film very hard and very unconvincingly towards wartime propaganda, notwithstanding that Britain and Japan were not actually at war yet.  It came out too early in that respect, to be sure: if They Met In Bombay had happened even a year later, it could have done everything it wanted to do against the backdrop of the actual Battle of Hong Kong, and perhaps gained some real resonance in the telling.  Instead, you will have to look hard to find a caper movie that so completely transitions out of the traditional pleasures of the genre, which are almost entirely a function of watching sexy people letting us get a contact high off the antisocial acts they commit for their own aggrandizement, and not so much about fighting perfidious fascists, or honoring The Uniform.
Gerald's backstory as a soldier drummed out of the British Army (I think Gable's supposed to be Canadian) comes back into play in a big way, when his disguise as a British officer gets taken at face value by the British forces in Hong Kong, who are presently engaged in a dispute with the Japanese occupiers of China in Guangdong.  Like I said, if this came out just a year later with the events of the actual Pacific War to draw from, it could, I think, have worked.  But in the context of the June of 1941, it falls flat on its face, and our romcom caper becomes a damned moral fable about redemption, somehow simultaneously both more bullshit about its redemption than it needs to be and not quite bullshit enough.  Suffice it to say it winds up in the least fun place that a genre that's almost purely about "fun" ever could, and the ways it takes to get there begin to make it annoying and grindingly tedious, not just as a story overall, but on a scene-to-scene and line-to-line basis.  It could seem like it's in keeping with Brown's move toward pious sentimentality, which was really just a repositioning rather than a radical change anyway, and perhaps Brown initially thought it would come off: the story does at least reflect the emotional ambivalence that had characterized some of Brown's strongest work and would continue to do so even as it got squishier (yet, ironically, somehow stronger still) in the 40s—The Human Comedy, National Velvet, The Yearling—but the execution is just so unbearably clumsy in the ways it gets there, by plastering a dumbassed grin on its actors' faces while abandoning their characters' actual personalities, that it's difficult to accept.  If Brown occasionally falling into the glib, stupid version of one of his movies is what it took to get his great films, that's fine, but whatever Brown's intentions, that a movie could ever misunderstand itself this badly is still frustrating.
Score: 5/10
Posted by Hunter Allen at 6:00 AM