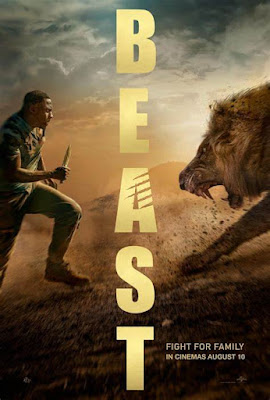 It's not Baltasar Kormákur's only thing—he's made action movies, he's made comedies—but the thing he's probably best at is the survival thriller.  His career is a couple of decades old by this point, but for this we need only go back to 2012's The Deep; it was not exactly his "international breakthrough" (he'd already made two American movies by then, one of which I've heard of), but it did almost get him a Best Foreign Film nomination (Iceland submitted it on his behalf, and it was shortlisted), and it kicked off this phase of his evolution as a filmmaker.  And yet, "thing he's best at" or not, that evolution has been marked by a process that feels more blindly groping than purposeful; movies about survival against daunting odds constitute nearly a quarter of his filmography—they constitute a decisive majority of his films since 2012—but each previous effort has only felt like a tentative step towards this.
If I had to hazard a guess, Kormákur was hesitant to change the unadorned, stereotypically Nordic, and notionally-elevated docudrama style he'd brought to The Deep, not out of any deep-seated sense of propriety—when it comes to his action movies, he's never had any apparent objection to populism (or crap)—but either way, each successive survival film he made feels like an experiment, each one fiddling with a different approach.  The Deep had been largely austere, much less of a "survival film" than you would think (indeed, only the middle third of its hour and a half runtime actually concerns itself with its maritime disaster procedural, and it's curiously anti-procedural even at that); 2015's Everest, presumptively still Kormákur's next-best movie, is vastly more of a conventionalized "disaster flick," but still circumscribed by its true-story realism, and serving more as a series of actor's reels on the subject of dying and talking on radios than a thriller, even if nothing about what it aspires to be is substandard.  2018's Adrift, however, signaled a willingness, if not yet the ability, to spread beyond the confines of the docudrama chronicle.  There's a huge amount to love in that film, but it's a damnable misfire, too, starting with a calamitous flashback structure inherited from its heroine's memoir, compounded and aggravated by a dumbshit twist that wasn't in her memoir, and which would've been better as an openly-expressed narrative conceit.  You could earnestly wonder why they bothered paying Tami Oldham Ashcraft for her incredible true story of survival, since you can't copyright "couple experiences hardship on a broken boat," and that isn't what Ashcraft's story was about anyway.
Maybe Beast brings us Kormákur in purified form, then; or maybe, since Kormákur isn't necessarily a filmmaker I respect without caveats (though he's getting there), he was hijacked by his brand-new team of craftsmen towards their own ends, for it pleases me to imagine that talented journeyman cinematographer Philippe Rousselot wanted somebody to finally notice his work, and editor Jay Rabinowitz, an editor whose name I actually recognize, wanted to stretch himself, and that's why Beast, though almost undoubtedly Kormákur's crowning achievement in or out of survival thrills, only moderately resembles anything in Kormákur's previous filmography (and then mainly in its appreciation for exotic locales, and in the line you can draw from The Deep and its flourish of 8mm flashbacks to the flourish of black-and-white still photography here); well, whatever happened, Beast is more exhilaratingly emblematic of muscular 21st century digital cinematography than muscular 21st century digital cinematography even deserves, and a terrific exercise in whatever it is that film editors do when the movie involves neither film nor, to an unusual degree, edits.  At least as importantly, Beast throws off the chafing shackles of the true story format, for Kormákur has at last seen the light: movies are not strictly for relating things that did happen, but for things that probably wouldn't.  Accordingly, it seizes upon a scenario that's grounded in some strained plausibility but isn't too realistic, and I know you need me to say it, so here it is, "Dude, it's the movie where Idris Elba punches a lion in the faaaaace."

Beast, therefore, is at least as much a descendant of one of the more gratifying lineages of 2010s cinema, the revival of the mid-budget animal attack film, and is surely the best since that revival began in earnest, back in 2016 with The Shallows.  (I shall withhold making the claim for the time being, but it might actually be a scoche better.)  And there is a certain self-superiority that people bring to these movies, such as compels them to describe this one as "Idris Elba punches a lion in the face," that I don't really jibe with; I suppose it's part of the fun, but it belies a certain willingness to throw certain movies onto the pile marked "unserious garbage," which honestly might be one of the reasons American cinema is swimming in unserious garbage.  Still, it's an assumption that some movies are inherently "bad," or at least not art, and can therefore only be "enjoyable" and graded on a narrow band of enjoyability, at that. It gets into rankling questions of critical philosophy (and just how much taste-signaling, the fundamental mode of great swathes of film writing, irritates me), but let's leave it at this: it blunts the appreciation that I think should be given to truly well-built movies of any stripe.  And Beast is immaculately well-built.
Anyhow, this is how Idris Elba gets put in a position to bop that lion, while getting bopped a few times himself: Nate Samuels (that's Elba) is a doctor—I forget at this point if he's an oncologist for maximum irony—and he has, by a technicality, been recently widowed, in that he and his wife, a famed photographer, separated not long before she was diagnosed with the aggressive and advanced strain of cancer that killed her.  Whether or not his daughters Meredith (Iyana Halley) and Norah (Leah Sava Jeffries) would have regarded their parents' divorce or their mother's death with any particular stoicism as individual events, "Mer" has taken what looks to her like her father's abandoment of her dying mother even less well.  We meet the Samuelses in the midst of Nate's attempt at something like a hail mary, sweeping his kids off to Limpopo in South Africa, their mother's homeland, perhaps likewise hoping that in Mer's case the landscapes and fauna will inspire her own penchant for photography (though in no instance does he seem to be able to communicate this to her, nor does she act as if the sentiment would be welcome even as she complains he shows no interest in her hobby, and this is altogether a less unsubtle screenplay than you would either guess, or than it sometimes presents itself as).  Well, Nate reconnects with their old family friend Martin Battles (Sharlto Copley), a park ranger, who's delighted to take them on a good old-fashioned safari.  Yet soon after starting out, they are met with horror—a village, silent and seemingly empty.  On further investigation, Martin and Nate discover the mutilated bodies of its inhabitants.  Unbeknownst to them, but knownst to us, as it comprised the film's opening scene, a family of lions was exterminated by a gang of poachers the night before.  They left but one survivor, its patriarch, who has determined that his shattered pride will be repaid with human lives, and not only the guilty, but every human he comes across, killing every person he sees until such time as people manage to kill him; and our ill-fated heroes have stumbled directly into his path.
This is tight, and it's even in danger of being too tight; there is at least a tinge of predictability to this scenario as a whole—I mean, you presumably wouldn't need to watch it to know how its family dynamic shakes out, and while that's an arid and shitty way to approach stories, we do live in a world with a lot of arid, shitty people—and even on a micro level there is perhaps a tiny bit too much overt polish to the screenwriting, which is more visibly written than one may prefer in terms of just how obviously some elements are set-ups for later pay-off.  But if it errs on the side of cleanliness, that's leagues better than the alternative of sloppiness, and even so, there's just enough detail that manages to remain firmly fixed in the realm of texture rather than plot scaffolding, to the extent that Beast mildly shocked me when Mer's photography has no bearing on anything besides her character and some pretty black-and-white images—I rather like that the work was put in to make Mer noticeably good at her hobby—and, anyway, it never Rear Windows its way into the Samuelses' tactical playbook against their leonine foe.