Gilbert and Garbo in 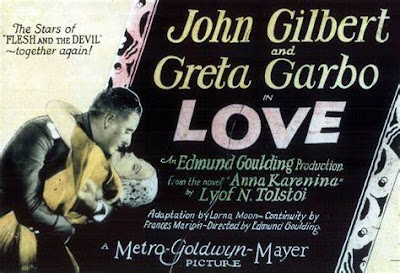 LOVE
1927
Directed by Edmund Goulding
Written by Lorna Moon, Frances Marion, Marian Ainslee, and Ruth Cummings (based on the novel Anna Karenina by Leo Tolstoy)
Spoilers: saying there could be something to meaningfully spoil about this adaptation of Anna Karenina is a spoiler in itself, ain't it? 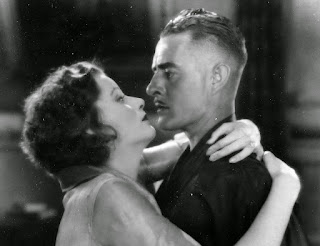 In the December of 1926 and the months afterward, Flesh and the Devil had proven an immense and epochal success, and in hindsight it wouldn't be too much, just because it might be my own single favorite film of the silent era, to call it one of the most important, too.  It had, in a stroke, re-confirmed John Gilbert as the idol of millions, and effectively created Greta Garbo as the idol of millions more, and without the amorous and artistic attentions that the former had offered the latter during its production, there is scarcely an imaginable timeline where Garbo did not leave America and return to Sweden, thereby depriving Hollywood of the woman who was pretty much already its single biggest star and transforming the landscape of American movies into something that would still probably be broadly recognizable to us here in 2022, though you'd realize there was something subtly off about your universe that you couldn't quite articulate when you sat down to watch Joan Crawford's Queen Christina—even so, the truth of the matter is that there is every possibility that Garbo and Gilbert alike might've been happier to have lived in that world instead.  It had, likewise, represented the great leap in director Clarence Brown's career from a dime-a-dozen melodrammer peddler to the best filmmaker not enough people talk about.
The story goes that MGM raced to capitalize upon that success, and upon the highly-publicized romance between its stars—so which one's flesh and which one's the devil?—and hence the much-celebrated marketing hook that's effectively their follow-up film's full title, John Gilbert and Greta Garbo in Love.  It probably didn't matter that much what the film's actual story was in this regard, so long as it paid off on the promise of its poster—I have no particular conclusion to draw from the observation, but the picture was the effort of four credited writers and while it's not at all unusual that the scenario/intertitle team would be entirely female in 1927, four for four is at least worth pointing out—and in many respects Love is Flesh and the Devil if you removed almost everything but the protagonists' affair, and, also, if you lit it extremely brightly so there's barely a second of the movie where you're in danger of not seeing 100% of Garbo and Gilbert's faces.  It is technically an adaptation of Anna Karenina, so maybe the formulaic similarities are accidental, though in this regard it is a ruthlessly pared down version of Anna Karenina, one that cares about nothing, nothing, but the essential elements of Anna, her lover, her husband, and her son, and even the latter two exist solely to provide the former's trysts the erotic charge of adulterous taboo, and to set the challenge that—not to get too ahead of ourselves—Gilbert and Garbo meet trivially, like they're not aware it's supposed to be a challenge, which is to project a passion so overriding and all-consuming you hardly question whether they're worth abandoning a child, destroying a reputation, or throwing yourself under a train for. 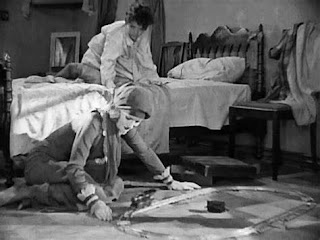 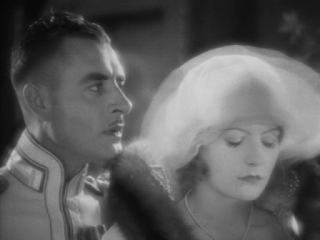 But that is all it needs, and Goulding and Gilbert know it, privileging the stars in long takes and close-ups and two-shots that are basically close-ups because their faces are mashed together, and I'd barely be exaggerating to call it as exciting as pornography.  There are maybe other things I prefer about Love: Garbo's just more immediate here in her portrayal than in '35, less notably but no less especially with De Lacy, performing basically the same exact physical actions she would later with a new kid actor, but in the more animated way that silent cinema asks for, so that Anna truly showers Serezha with kisses and affection; I frankly prefer the streamlining of Anna's world down to no more than four actual human beings, if that many, and the amorphous blob of a hatefully polite society beyond them; in a special case of "who cares about these other people?", Basil Rathbone undeniably invests Karenin with a far greater richness in the '35 film (he's given more opportunity), but I'm not sure that matters much, and as his and Hurst's differing flavors of gray cruelty are basically a push, perhaps I prefer the flatter conception of Hurst's Karenin here, given the character is effectively an absence of emotion.  (In fact, Hurst could probably go further, in that he sometimes does still appear angry.)
But at the risk of belaboring the point, it's Gilbert: the '35 film paired Garbo with Fredric March, who didn't want to be there in the first place.  In particular, March could barely stand being in the same room as Greta Garbo, and his performance is accordingly austere and, frankly, bad; John Gilbert could barely keep his pants on in the same room as Greta Garbo, and it's magic.  And more than magic: there's a resonance to this story in particular that prefigures Gilbert's own tragedy, both the Alexei and the Anna of his and Garbo's real life, dead in nine years of a much more protracted form of suicide, and maybe that shouldn't matter, but in hindsight it fills this film with something that's sometimes a little hard to bear, albeit in a beautiful way, freezing he and Garbo in (at least what looks like) a happier time.  Love whitewashes Alexei a bit—or maybe it's that when Alexei reveals the ugly side of his hunger, Gilbert knows it, and feels shame on Alexei's behalf—but this seems precisely correct for the story this wants to be.
But then who's to say what this story wants to be?  I kind of don't want to spoil it, though I'm unavoidably pointing in the direction of what happens because only two things could happen, if clearly only one thing should happen.  It presents as a conundrum, relating to film preservation and at least poking at movies as slapped-together constructs—"what is a film, anyway?", that kind of shit—but while Hollywood is legendary for smoothing down rough edges, I've never seen a change so maniacally committed to that ethos yet also so casually tossed right the fuck off, already the parody of itself.  Love, anyway, was not made with just one ending.  It was made with the preferred and proper ending, and this was shipped out to Europe and screened on the coasts.  It was also made with a condescending "Midwestern ending" to be shown to, as far as I can tell, actual cows and sheep.  If not for its utter laziness, I almost wonder if it would work—whatever else, it shocked me—but it is real Goddamn lazy, a button on the end of a tragic romance that excises Anna's suicide, kills Karenin offscreen, and delivers Alexei directly to the merry widow's door.  But no, it was never going to work.  The problem: today, the Midwestern ending is what we're stuck with.  (The presentation is compromised in other ways, too: the score on the Warner Archive disc was recorded live before an audience, and they are awful, laughing at everything except the five or so jokes that are in this movie, finding kissing and foretellings of doom more amusing.)  And I have no idea how to score a film like this, that is in large part a near-masterpiece of overenunciated silent erotica powered in large part by foreordained tragedy, when I know now that it actually just farts in my face at the end.
Score: 7/10?
Posted by Hunter Allen at 1:09 AM