The man who killed the British Empire but not the Bigfoot 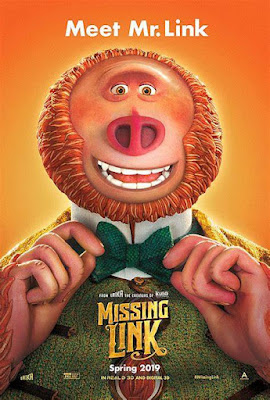 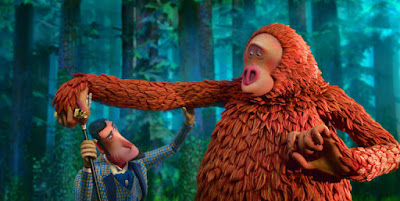 Wikipedia still uses the present tense to describe Laika, the stop-motion animation house that challenged the world and largely failed, and I assume that they're correct to do so—their sixth film, Wildwood, has an indeterminate 2023 release date, which likely means it's close to done, and optimistically yet a seventh stop-motion cartoon, The Night Gardener, has been announced to be in pre-production under Laika founder and shoe scion Travis Knight, since I guess having a patient, generous billionaire father helps one along in life—but I hope one could be forgiven for thinking of them in the past tense, considering how long they've been silent, and their graph has trended ever-downward since their not-even-that-financially-successful debut, Coraline.  Their fifth and most recent film, in particular, tanked so hard you can't even hope that it's broken even three years afterwards.  This was Missing Link, released in 2019 to a not-outright-hostile critical reception and catastrophically-low audience interest, grossing a touch under $27 million on Laika's largest budget to date, about $102 million.  Shamefully, I was part of the audience who didn't show up.  It's not totally my fault—my spouse is actively disinterested in Laika movies and perhaps stop-motion animation in general, possibly reflecting a broader current than we'd like to recognize.  I did at least catch up with it on home video, and while it didn't make me unhappy or even too disappointed, I don't want to use the phrase "quite the opposite," as it didn't do too much for me, either, and at the time, I simply didn't want to kick Laika while it was down.
Yet maybe even because of its easy-going inoffensiveness, it's never been too far from my thoughts (at least insofar as my thoughts go to contemporary American animation).  It works so well on its chosen level that it'd be a sin to dismiss it; and for whatever reason it's been my second most-frequently rewatched Laika film after the studio's masterpiece, ParaNorman.  Well, that reason is somewhat procedural.  I watched Coraline, reviewed Coraline, and anything else I do with it from now on is pure leisure.  I watched Missing Link, meant to review it, watched Missing Link again, meant to review it, and watched Missing Link a third time and am now, presently, reviewing it.
Which all sounds negative, maybe, but it probably won't be too long before I do watch it again, and more substantively, I might've returned to it more often because it's the most unique of Laika's films: Missing Link, despite opening with one legendary cryptid monster and co-starring another cryptid monster, is the one Laika film that has not so much as a toe in horror, while Coraline and ParaNorman are basically kid's horror first-and-foremost, The Boxtrolls is undeniably horror-adjacent, and the fantasy monstrosities of Kubo and the Two Strings render it at least horror-inflected; all those films are varied enough in mood, but if you're reaching for your Laika discs looking for a nice icky time, you'll find your choice split between three good options (or, in deference to the vast numbers of you who like Kubo more than me, four). 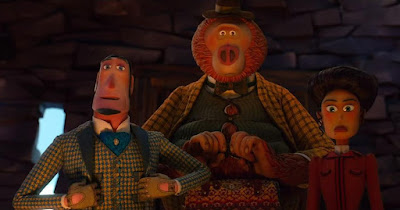 Missing Link, however, is the one that finally steps out of Henry Selick's shadow: the most Laika thing about it (leaving "stop-motion animation goosed with CGI post-production" to the side, since a Laika movie is going to be pretty visually recognizable regardless) is an alt-rock closing credits song that feels like it's at least thirteen years older than the movie even if it isn't (nice song, though).  The closest it gets to grotesquerie is a villain whose scarring indicates he was almost scalped by a big cat, and in the rare case it's even gross, it isn't gross in the same way as every prior Laika feature; the grossest thing in it is when a character eats dried dung, having confused it for cookies, and enjoys it.  So it's gross, on the odd occasion it is gross, in a very children's-animation-in-2019 way.  Any grotesquerie leftover, then, is just a product of Laika's design ethos, which has almost uniformly tilted toward "everyone is kinda ugly" since the beginning, probably out of Selick's founding effect, though in this instance that was certainly exactly what writer-director Chris Butler wanted, given that he also served as his own character designer.  And that name is a pretty good sign: Butler is probably the person most identifiable as Laika's paramount talent, (co-)screenwriting credit on Kubo aside; he had already co-directed ParaNorman and received sole writing credit for the film (not that one should accept "sole writing credit" in a cartoon at face value), and likewise wrote this one solo, ParaNorman being definitely Laika's best story, and Missing Link at least proving a decent yarn.
That yarn then, takes us back to the 19th century—no earlier than 1889, but probably not 1900 yet—where we meet would-be British adventurer Sir Lionel Frost (Hugh Jackman) out on a particular loch up in Scotland with his fed-up valet, Lemuel Lint (David Williams).  His field is the discovery of legendary animals (he has not actually discovered any yet); his quarry today, of course, is the infamously obscure Ness plesiosaur.  He finds it, much to Mr. Lint's displeasure, but in the ensuing chaos he loses his photographic evidence, compelling him to return to the gentleman's league with which he has loosely affiliated himself, the so-called "Optimates Club," to suffer another round of mockery and derision.  Yet Sir Lionel has recently been extended an invitation to Washington state by an anonymous admirer, who claims he can provide him with the reputation-making discovery of the long-sought North American sasquatch.  The Optimates' leader, Lord Piggot-Dunceby, scoffs, but is checkmated by pride into accepting the challenge Sir Lionel metes out: if Sir Lionel returns with proof of the large-footed beast, the Optimates must accept him into their ranks.  Piggot-Dunceby, annoyed to be so outplayed, dispatches an assassin, Willard Stenk (Timothy Oliphant), to put an end to the annoying striver who, this time, might actually succeed.
It doesn't seem so likely to me to have needed to bother with an international contract killing, but Piggot-Dunceby's fears do turn out to be justified: for the author of that anonymous invitation was, in fact, the sasquatch himself (Zack Galifianakis).  Soon acquiring the name "Mr. Link" and hiding his identity under the departed Mr. Lint's slightly-forged identification papers, the lonely sasquatch, last of his kind, has a simple proposition for Sir Lionel: he'll supply him with some manner of undeniable physical evidence of his existence; and Sir Lionel will be his guide and protector on an arduous emigration to the Tibetan plateau, where he hopes still live a cousin race of yeti.  Sir Lionel finds this an equitable exchange indeed, but between there and here they'll need to make a few stops—notably in California to acquire a map from an old friend, Adelina Fortnight (Zoe Saldana)—and escape Piggot-Dunceby's hired killer, who was already pleased to murder Lionel for the money, but very much wants to kill Mr. Link for the achievement.
One can overstate the differences between this and the other Laikas, I suppose: it inevitably has a certain stuffy-quirky-Britishy-tweeness about it, something that's only really completely absent from ParaNorman and Kubo (given that Neil Gaiman wrote Coraline's source material, 'nuff said), though it was cranked up to outright dangerous levels in The Boxtrolls, which is Missing Link's closest comparison.  It's more of a cod-Britishness in this case, and sometimes a parody of Britishness (though that's basically The Boxtrolls already; that one was a little more pointed, this one's a little broader and easier and more political, relitigating century-old British imperial attitudes).  But it's a good enough simulation to often feel like the parody of Britishness that intentionally constitutes about half of all British media and unintentionally constitutes the other half, with well-chosen British character actors filling the margins even if the closest the leads get is an Australian, who has more often pretended to be a North American; I won't, however, say this is where the film's best humor lies, and thankfully it's not the balance of it.

It tunes it to a somewhat different frequency, anyway, and filters it through something a little more French—I mean, it cannot be overstated just because it's obvious that this is the straightest riff on Jules Verne's Around the World in 80 Days possible without just making an Around the World in 80 Days adaptation.  It winds up resurrecting a whole genre of adventure cinema, the trains-and-boats adventure travelogue, that has basically ceased to exist, the kind of movie where a good 3% of the runtime is top-down shots of maps indicating our characters' progress across the globe—so at a runtime of 94 minutes, upwards of a minute and a half is just maps—and you can ramp that up to four percent if you count top-down shots of the actual landscapes that are intended to resemble maps, and are cross-dissolved back and forth from maps.
Being a cartoon, and one juiced with Laika's highest budget to date and put together by artists at the top of their craft, it never once feels unnecessarily bound to realism, and instead is a sprawling collection of fanciful geographies that serve as a series of exquisite dioramas that each create a specific dream-vision of a specific corner of its 19th century world—ultimately leading up to the most fanciful of all, the secret ice-hewn Himalayan city our heroes seek (whereupon Butler's literary affections shift from Verne to James Hilton, if, anyway, Lost Horizon were about white-haired ape-people ruled by Emma Thompson as a mean, rules-lawyering Buddhist ape-woman).  My single favorite shot of the whole film is just a seemingly tossed-off walk-and-talk between Sir Lionel and Mr. Link in rural Washington, made bizarre and wondrous and narratively-essential by the pile of redwood logs behind them, hardly a one even similar in size, all enormous, and some so absurdly big they suggest a world of giants—a lost world, at that, which is what our Mr. Link has been quietly grieving his whole life.  But even London, the "quotidian" baseline, is pretty amazing by dint of its stop-motion puppet inhabitants and where-does-the-CGI-start backdrops, defined by the cold geometry of the Optimates Club and Sir Lionel's cluttered but warmer study, festooned with the memorabilia of a hundred failed expeditions.  It's not always operating at peak capacity—there is a sequence in a ship with a swinging light, moving characters, and a moving camera, that seems like it should be much more of a show-off moment, in terms of lighting design, but they weren't able to get it to quite work—but it's a beautiful movie, and since all of Laika's movies are "beautiful" in their handicraft diligence, let's say also it's Laika's prettiest.