I'm usually less one, these days 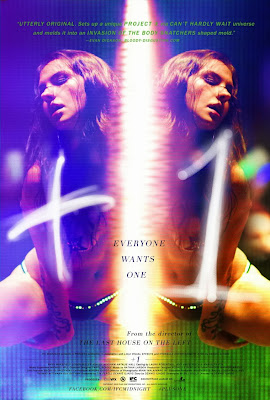 If it's Can't Hardly Wait vs. Primer, Primer wins.  Add copious nudity, and a seriously unexpected ending, and, yeah, it's pretty great.

Note: you may sometimes see this movie referred to as Plus One, but not here, except for search engine purposes—and done.

"You really are a polite stranger.  Come to this party with me."

It's the first weekend of the summer after the first year of college.  Friends are reuniting, but there is a palpable distance now.  Most poignantly, David's wise decision to avoid higher education and stay in town debt-free, probably gaining valuable work experience in the meantime slacker ethos and lack of ambition has created a gulf between him from his girlfriend, Jill, a driven, bright athlete who went away to school (sport: fencing; verdict: awesome).  A chance quasi-infidelity occurring right after she's lost a match reveals the deeper rot within their relationship, and she breaks it off with him.  He is, to put it mildly, unprepared to accept that it's over.

A partner who's into your swordsgirl fetish is pretty hard to replace.  Believe me, I've been there.

In tandem with his best bro (and I do mean bro) Teddy, as well as his Hollywood-hot yet unaccountably-lame friend Allison, David pursues Jill to the homecoming celebration they've all been invited to, their buddy Angad's Gatsybesque ultra-party, a get-together of the kind you often see in movies (though this pushes even those limits) but which I doubt anyone outside of F. Scott Fitzgerald himself or HBS' Section X has ever actually experienced.

As an aside, this movie would have been bumped up half a letter grade, no questions asked, if they had used practical effects instead of 1995's shittiest CGI for their game of indoor Fireball.  Get that weak shit off my track, Iliadis, and bring me my bowling ball and blowtorch.

In the Before Times—that is, when I was a fun-loving, sociable dude and not the bitter, depressed loner I became during law school (but I repeat myself)—I went to and occasionally even threw house parties with upwards of a hundred attendants.  However, neither I nor anyone I knew ever sprung for a multi-person DJ team, this open a bar, the time of a half-dozen strippers, or Christmas decorations such as Clark Griswold has never seen, let alone nyotaimori service.

So it really is a most excellent party.  And yet you wouldn't know it from the dour expressions most of our cast are wearing.  David's attempts at detente are met with the exact amount of derision and scorn you'd expect, if not more, and Jill's got her eye on another, significantly beefier guy; yes, things are looking pretty grim for David.  Meanwhile, Allison is getting punked for no reason by the (seriously, significantly less) pretty girls and their boyfriends.  But Teddy does manage to secure the affections of fellow partygoer Melanie with his semi-Cera semi-charm, so all is not lost.

Then things get weird.

OK, not that weird. Or do they?

One of the many things I really enjoyed about +1 was its patient pace and its confidence in its dialogue and its actors.  The first half-hour isn't bound to edge out Superbad or Sixteen Candles, but David, Jill, Allison, Teddy, and Melanie are relatable, likeable people with relatable, likeable problems, and the latter two display a very relatable, very likeable willingness to be naked onscreen and perform some decently well-simulated softcore sex for what must be five solid minutes of this movie.  And they're all funny, sometimes very funny, and I'd be delighted enough to see Rhys Wakefield and the rest of this gang in a proper young adult sex comedy.

But the selling point of this movie is that, soon after arriving at Agnad's bacchanal, the power goes out, and when it comes back on, everyone in the party has gained a double of themselves, acting out their lives as if it were twenty minutes ago.  Oh, yeah—it's a time travel movie.

When the first time slip happens, David et al are the only ones left in the house (thanks to Agnad's glowstick-lit magical mystery tour around his gardens and stripper stage [yep]), so it's some time before the party at large notices they've got a bad case of the temporal doubles, but when they do, hell predictably breaks loose, and in some unpredictable ways.

Hey, you heard the man.  Get low already.

Everybody is rightfully bewildered and terrified, and though one gets real curious (see Allison and Allison, the redheads, supra), it's David who sees the possibilities—and I'll leave that at that.

+1 does what a time travel movie should do, and that's use its premise to explore the concepts of identity and free will, and, especially, our universal desire to put right that which once went wrong—and how destructive that desire can sometimes become.

If I can fault it, it's that the rules aren't clearly spelled out.  This is understandable, because no one here actually built a time machine—this is a freak occurrence, that has no given explanation (and that's a good thing).  However, it's also part of the fun of time travel stories to (try to) follow their logic.  Primer is the example par excellence: (mostly) clearly spelled out rules; incredibly complex results.  I've seen Primer about a dozen times, and I only kind of get it, because my LSAT isn't high enough.

Despite this, I've thought about +1 for an hour or two and I think I figured it out.  No real spoilers follow, unless being made aware of the premise is a spoiler, in which case, why are you reading anything about it in the first place?  That seems stupid; in any event, just go see it now.  However, if you've either already seen it, or the movie's premise is something you want to learn more about before you do see it (which you should), follow with me as I proceed to nerd out. 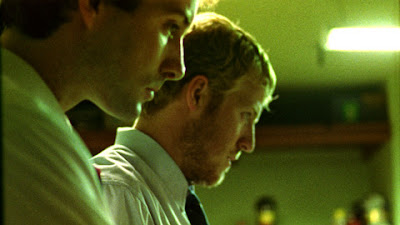 "Abe, why don't we ever get invited to good parties?"

Firstly, only living objects (and their clothes and personal effects, I guess) are doubled.  To me, their appearances initially seemed to follow a lightning-bolt-shaped pattern—i.e., the duplicates seem to exist in multiple iterations, and they can be affected as long as any changes you make to their world line occurs before their next iterations' reboot point, which with each reboot comes later and later along their world lines (clearly someone's been reading Ken Grimwood's Replay).

But I think instead it's just one alternate universe, largely identical to the original, which is initially about fifteen minutes behind but appears from the original's vantage point to be moving faster.  This universe is impeding on the original in the form of its biological doubles.  It follows a dashed line pattern instead; they appear when the power comes back on and disappear when the power goes off, but even while they aren't observably existing, they're still alive and existing somewhere else (wherever that is).  So any action that takes place during their time in our universe is in fact recorded, and when they disappear, they carry on as if it's normal, because during this period it actually is, although sometimes they are confused because the Earth 1 people they're talking to suddenly disappear.

In any interpretation, eventually the infringing entities are going to come face-to-face, if not more than that, with their Earth 1 analogues.

I'll need to see it again, but I am not yet sure whether either interpretation, and maybe any interpretation, can cohere entirely with the events on screen (I think Interpretation 2 aligns pretty closely, however).  If there are mistakes, and I do suspect there may be because in time travel movies there usually are, this naturally opens up the film to charges of lack of rigor.

Your experience of rigor may vary considerably.

And, yes, they could have gone the full Cronenberg with the climax, but I don't think that was Iliadis' goal (or within his budget).  Yes, it would have been cool, I agree with you.

Regardless, though it may or may not be a few percentage points shy of total consistency—I'm still not saying it is—it doesn't matter much.  The logical (and logistical) difficulties inherent to the subgenre make total consistency a sometimes unapproachable ideal.  And who cares—I mean, have you ever seen Donnie Darko?  Like that great film, this movie's fun, smart, surprising, and thought-provoking on its merits and (putative) demerits alike.  I kind of love it.

Right now, +1 is almost an invisible film (there are three reviews on Rotten Tomatoes as of this writing), and that's a shame.  It's the best new movie I've seen since, appropriately enough, the last apocalyptic party film.  (That movie came out almost five months ago.)  +1 deserves a higher profile, and it deserves your attention—and I think, whether now or in time, it will get it.

P.S. Where is my fucking Replay movie, anyway?
P.P.S. and UPDATE: yeah, on a second watch, it's radically inconsistent.  I am still very fond of it.

+1 is getting a limited release in theaters, but that does not concern me, because to me NYC, LA, and Chicago might as well be fictional fantasy lands.  +1 is, however, available on VOD.  As usual, I got mine through Amazon.  $7 well spent?  No, $7 best spent.
Posted by Hunter Allen at 5:58 PM