Busting makes me feel good, but probably displeases my mom 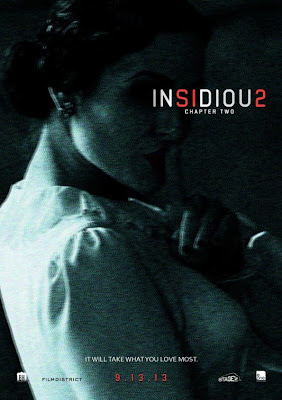 An acceptable diversion that will either please you or annoy you, depending on your genre expectations—but it won't do either to any really excessive degree.

Insidious Chapter 2 Insidious 2 is a goofy, funny movie—sometimes.  It is a creepy, chilling movie—sometimes.  It is a genuinely scary movie never, but I think we can now disregard the idea that there was ever any intention on the part of James Wan that it be so.  It is an unbelievably stupid movie on at least one occasion.  But "stupid" isn't a genre, so what is it?  After having seen this weird sequel to what I thought was a pretty decent horror movie, I think the Insidious series is, in fact, something like a fantasy adventure franchise, just with more jump scares and corpses than CGI swords and magic words.  Heck, the whole thing is rated PG-13, and largely revolves around heroic quests to an enchanted land undertaken by the chosen one and his kid.

This kind of categorization helps explain the surprisingly boisterous chase scene that ended the first Insidious.  Back in 2011, through various contrivances, Josh Lambert rescued his son from a kidnapper demon who lived in an extradimensional realm of the dead called The Further.  Unfortunately, because he ignored his mom's advice and stopped to talk to dead strangers, he became possessed by at least one mean ghost who was tired of living in this initially visually striking but rapidly tedious afterlife.

"Whaaat? And leave all this?"

Insidious 2 is that ghost's story, and it is also the story of Josh's wife, Renai Lambert, who decided to ignore the obvious fact of her husband's possession by a ghost, and the even more obvious fact that once under its thrall he killed Elise, the paranormal investigator who'd been helping them.  And, oh man, she will continue to ignore such facts for as long as humanly possible.

Patrick Wilson has a face that I am never unhappy to see, and to see him play against type and get to be vicious and weird and menacing is Insidious 2's most appealing treat.  The hilarious unsubtlety which Wan and Wilson bring to their ghost dad is alone worth the price of admission.  No shot with Josh is framed without looming.  No line of dialogue is read in a proper human tone.  No wife is beaten without filming it like it's Gladiator.

It's almost bad, but since it's obviously intentional, and is highly entertaining, this character, given life by Wilson's screen presence, buoys this movie above mediocrity.

Unfortunately, Wilson does not fully counteract the somewhat-banal, radically-unchilling ghostly possession itself.  His teeth are falling out, he's become anemic, his body's just generally decaying, and so he's got to kill the family to steal their life force blah blah blah.

"I told you why.  I said I was impotent because of nuclear war.  Now drop it!"

The two surviving investigators, whom you may remember from the first film as Donald Sutherland's young clone and Toad from American Graffiti, along with their new, non-dead boss and spiritual associate, The Dice Man, really do have their moments.  They get involved through Josh's mom's slightly less oblivious approach to the whole Josh situation.  These dudes are funny, serving as a far more omnipresent comic relief than you'd ordinarily find in a horror movie; but, as noted, this isn't a horror movie proper, so it basically works.

Their usefulness, however, is largely to provide opportunities for jump scares, creepy shit, and a very great deal of talking, and their typical scene involves them rooting around dark hallways in abandoned buildings while explaining mumbo-jumbo that we may or may not need to know.

Despite the exposition, all of this gets rather confusing.  At pretty much all times it is completely unclear by which particular ghost Josh is possessed—you see, there are actually two key dead people in this movie.  Josh is being inhabited by one, the other, or both halves of a mother/son serial killing duo.

"Wow, this will pay off wonderfully and in a narratively cohesive manner!" I whispered to no one who cared.

It's perfectly possible that it was my fault that I missed these subtleties of plot.  Of course, by "my fault" I mean "my fault" in choosing a theater filled with subhumans whose not-shutting-the-fuck-up would have been more appropriate to a Rocky Horror screening in Hell.

In any event, even despite the end of Insidious 1, I managed to go through most of the movie thinking the actual possessor was the son.  I guess that's gender expectations for you, which Insidious 2 suggests can have some pretty serious negative consequences.

Not pictured: a sweet transvestite.

And yet: I don't think the various actions taken and statements made by possessed Josh can make sense unless both were in there.  (But if the son were in there, where did the specter that haunted his old house and spooked the ghosthunters come from?  Can ghosts bilocate?  In fact, I don't know that they can't: see the extra-spoilery postscript.)

I was with the movie totally, despite these issues, until the triple absurdities of the climax: one involving someone deciding to take a nap in the midst of the loudest scene from The Shining; another involving a deus ex mechanical ally from beyond The Further (so from, I guess, The Furthest?); and, finally, a sequence that does not emulate Ghostbusters in any way, shape or form, because you know how Ghostbusters did not resolve its world-defying threat?  By having Venkman keep hitting Gozer the Gozerian in the face with a blunt object till she left the material plane.  But it turns out it might've worked.

Insidious 2 does have a largely happy ending, which, just like The Conjuring, is why it could never be an especially great horror film (aside from the fact that it only occasionally attempts mood).  Horror films should at least end with permanent psychological damage, if not in an outright portent of doom, like Insidious 1.  Of course, Insidious 1 is now undermined because it wasn't really all that doomy after all.

But The Conjuring has no claim to being anything else other than what it was advertised as, a scary movie; it lived or died in the horror genre.  Insidious 2 has the advantage here, because it can be judged as something else.

So, as an adventure movie?  Even then, Insidious 2 could have been more.  But with properly calibrated expectations, it is perfectly possible to enjoy it for the imperfect thing it is.

P.S.: To preclude totally spoiling it, I have avoided mentioning the coolest scene in the movie, which is the reason it gets a more solid B than it perhaps rightfully deserves.  It does, naturally, involve Patrick Wilson.  It also involves a conceit very rarely seen in this type of material.  Its substance meant that I could have made reference to a 1980s adventure franchise that wasn't Ghostbusters.  Great Scott, it's pretty good—so good the movie should have been far more about it than it it was.

P.P.S.: Maybe this is an importune question, but whatever did happen to Darth Maul, anyway?  Did he just give up?  Do you think Toby criticizes him for his work ethic?
Posted by Hunter Allen at 12:01 PM