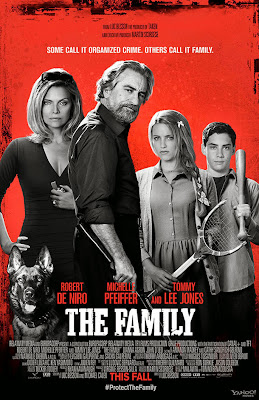 Another one of these Goddamned movies where we're supposed to think Robert De Niro is funny because he's Robert De Niro.  Also, turns out Luc Besson hates France.  This is sort of a French movie.  I don't hate France, but I am disappointed in it.


The Family is an action-comedy, I guess, about the "Blakes," a family headed by a former mobster who turned state's evidence and as a result got a price put on his head.  He, his wife, his daughter, and his son have been exiled by the FBI Witness Protection Program to Europe for their safety.  Unfortunately, as violent misfits who can't control their tempers, they've been less than successful at fading away than their handlers would have liked.  This is the story of their most recent move, to a little French town not far from Omaha Beach.

I heard only one other person laugh during The Family.  He did it one time, and I only heard him because he was sitting right behind me.  I forget what it was he thought was funny; I didn't find it very amusing, but I'm glad he found it enjoyable.  I may have been noticed to laugh once myself.  This was fifteen seconds before the credits rolled, when the best joke in the movie, a simple juxtaposition between what the image is actually depicting and what one of the characters is describing in his narration, elicited the tiniest titter.

This is not to say that The Family is really, deathly unfunny.  There are a lot of chuckles to be had throughout its (rather too long) running time—they're just all inaudible.  In many ways, The Family is the worst kind of movie to review, because there's nothing in it that you can really point to and say, "This is bad."  It is a film of absence.

But if I had to name the one thing that I found so boring about The Family, it was Robert De Niro.  I don't know exactly when it was decided that De Niro should be in comedies where he plays a "funny" version of the De Niro tough guy stock character, but, really, fuck whoever had that bright idea.  Which came first, Analyze This or Meet the Parents?  Who cares?  They both sucked.  How did they ever give birth to a whole one-man subgenre?

Instead of Billy Crystal doing his best, or Ben Stiller operating well below his capacity, however, The Family faces De Niro off with Tommy Lee Jones.  The advantage here is The Family's: at least we aren't supposed to be amused by the embarrassing spectacle of an effete nancy cowering before a bullying old man.  And Jones is a gifted comic actor—or the Jones tough guy stock character has not been so overused as to be rendered comedically inert—so when they're together, it's not too bad.  Unfortunately, Jones fades in and out of this movie, a welcome relief when he's there, missed sorely when he's not.

What you're looking at right here is gold.

Casting Jones was a good idea, that they don't do as much with as they could.  And if they gave out awards for undercooking good ideas, The Family would win in a sweep.

One of the two (2) other good ideas that The Family has—and mishandles—is to set up the legendary rudeness of France itself as an antagonist in its own right.  As soon as they move to Normandy, the Blakes are beset from all sides by a parade of French stereotypes: anti-American bigots, lazy workers, and gang rapists.  Besson gives us what we demand: a quintessentially American violent resolution to interpersonal problems.

Unfortunately, he does so with such rote rapidity that nothing like tension is allowed to develop before a yawning rampage of revenge kicks in and grocery stores are blown up, plumbers "fall down the stairs," and randy boys are beaten half to death with tennis rackets.

By the second act—the resort to violence kicks in well before the twenty minute mark—it's all grown a little stale; when Giovanni is still beating guys up to deal with his plumbing issues an hour after he's started, all this torture (and rather tame torture at that) has lost whatever appeal it might have had.  It certainly doesn't help that I've seen Robert De Niro generically hurt people quite enough for one lifetime.

"This is an intervention, Bob."

The final good idea The Family has is its gangster kids.  Their travails at their French school are interesting; I actually found myself invested in these scenes, and to such an extent it was a major bummer whenever Besson decided to return to the void that is their dad's memoir-writing/water-treating subplots.  The son and daughter use the lessons their father has taught them in a fun, engaging way to get revenge and get what they want.  Sort of, anyway: if the whole movie were a high school political comedy involving mafia tactics, it really would be far better for it.  But it's not.

Ultimately, through contrived means, the Mob finds out where the Blakes are and the climax, such as it is, involves their battle for survival.  Lots of gunshots are fired, but Besson has done more impressive action work before.  And even if it had been great, I still really doubt I'd have cared. 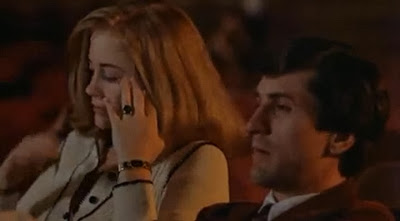