A prison movie: now only .17% references to sexual assault by volume! 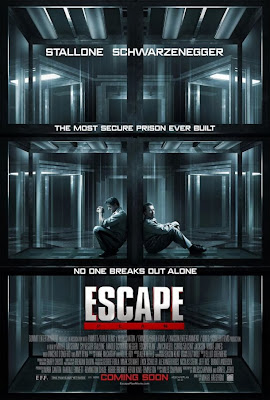 An all-star cast topped off by the biggest names in the action cinema of twenty thirty years ago bring to life this prison-escape-action-adventure-thriller, which feels like it was made fifty years ago: and there hasn't been a more simply pleasurable movie in a long, long time.

Imprisonment is my greatest fear.  I spent three days in what amounted to solitary confinement once, and while I don't want to be grandiloquent (or a nancy) about it and call it traumatic, it ranks in the worst experiences of my life.  So it's no mean feat that a movie about imprisonment turned out to be pretty much exactly my idea of a good time.

See?  Just look at how much fun it is!

Yes, there's a little bit more to this movie than a good yarn—there's an impossible to miss three-part message to Escape Plan, which is that 1)imprisonment without due process is wrong; 2)Muslims aren't necessarily such bad dudes; and 3)private prison firms are the lowest form of taxpayer-backed scum in the world, even worse than law schools.  And, sure, all that is fine; I think Tim Robbins could really find a lot enjoy here.

But it's not what the movie is about.  As the title to this review alludes, unlike Shawshank—or basically any other movie about or involving or just mentioning prisons, in the past four decades—talk of prison rape is confined to one single line.  It's an oblique reference at that, and there's no intent to be funny about it.  This is practically groundbreaking stuff.  You know why the writers chose not to indulge in this sort of awful exploitation?  Because they're smart, and to its infinite credit, this movie doesn't want to use prison culture as pablum and make a joke out of America's shame.  It knows what it is, and revels in what it is, which already brings it a long way toward being a very good movie.

Escape Plan, indeed, is a very good movie.  And what makes it so redeeming and recommendable is that it is, first and foremost, from beginning to end, an entertainment.

It's a machine, made for engaging your interest, and thus it is film in constant motion, with hardly a frame going by without something intriguing, or hilarious, or cool, or just plain weird happening within it.  It does, at length, develop some emotional content that does not feel exactly forced—and whatever you might think of it as an integral thread of the story, it is rather stunningly well-foreshadowed.  But Escape Plan is not concerned with the prison experience—nor, really, human experience.  That's damned fine: I can have human experience all day for free, and most of it is dull beyond words.  That's why I came to see Escape Plan.

This is an adventure film as much as a thriller, about solving fantastical problems as much as it is about its concept's inherent suspense.  This was the wisest choice, and Hafstrom deserves all the credit in the world for understanding his resources and putting them to their highest possible use.  This is a movie consummately without a tone problem.

So, to this end, Escape Plan montages, wipe cuts from every edge it has, and sets up expectations and fulfills or subverts them with an expert sense of which is the most entertaining.  It jokes, it schemes, it bleeds, it choreographs action both poorly and well, it doesn't care whether it's realistic or not that trained paramilitary personnel can't hit the broadside of an Austrian weightlifter, and it ends, honest, on a freeze frame.  It's an anachronism, a time traveler of a film, that popped into existence in 2013 without warning and—I can say from the detachment of a week after its release—without half the welcome it deserved from critics and less than a quarter of what it should have gotten from audiences.

The plot is, at fist glance, almost perfect within itself, if marred, on only an occasion or two, by the stupid acts or omissions of characters established as too smart to have committed them.  It is only very late in the game, after the climax, that Escape Plan's elaborate narrative scaffold turns out to have been constructed with a serious amount of sloppiness.  When all is revealed, though, I doubt you'll feel that this mistake is truly unforgivable.  So what if our hero was the victim of not one but two uncoordinated yet simultaneous, independent yet equally sufficient, double-crosses?  It's almost believable: Ray Breslin is, after all, just the kind of guy who puts himself in bad situations.

Stallone fills out Breslin as the world's foremost (only) professional prison breaker (he is also expressly said to be a former attorney, implied to be former engineer, is probably a present steroid user, and is definitely a currently practicing jackass).  He gets himself locked up under false pretenses, exposes the weaknesses in prisons by busting out of them, advises on how to remove those weaknesses, and collects fat paychecks from the Federal Department of Corrections for his trouble.  What Stallone does with his performance, as it is perhaps not conventionally good, can be easily overlooked.  I liked him in this, not just because his is an enjoyable presence—as laconic and mushmouthed as ever—but through physical signals, at least far more than his dialouge, he conveys a genuine competence.  Breslin is always looking, thinking, plotting, and when he executes, I believed that in his quasi-cartoonish world he could, in fact, plan escapes.

An exciting short film of a prologue establishes his credentials, and his process:  "A successful breakout depends on three things: knowing the layout, understanding the routine, and help, from outside or in."

"I've got the layout.  There are four walls.  Two ceilings.  Wait.  Only one ceiling."

The method of his escape may be a little fortuitous, but when you pace it right, nothing is impossible in a movie.  It is initially a thoroughly dumfounding scene, but the makers cannily wait just the right amount of time before you call "bullshit," then explain it, now showing all that was left unshown, in every important detail.  Before you can examine it for remaining trace amounts of bullshit, it is on to the actual story.

Heretofore Breslin has been busting out of normal prisons such as you might find on a reasonable fascimile of the planet Earth.  Now comes a mysterious CIA operative with a proposition for Breslin: admit himself to one of their super-illegal black sites, location undisclosed, and see if he can break out of that.  The job pays double his normal rate, of course—but it's clearly pride in a hard job well done that motivates Breslin to volunteer for this mighty feat of consulting.

It goes exactly as well as you would hope.  His tracking device is removed so his support staff cannot find him (Amy Ryan is his fuckbuddy and, I guess, accountant or something; Vincent D'Onfrio is his sleazy facilitator who certainly doesn't have any underhanded schemes of his own; and 50 Cent is his "techno-thug").  He is drugged and shipped by air to parts unknown.  He wakes up only long enough to witness a fellow inmate being rudely ejected from the plane, "No ticket!" style, by none other than Vinnie Jones—Bullet-Tooth Tony finally got a respectable position.

When Breslin arrives, he finds he is in the General Electric Prison of the Future, complete with transparent cells, barcoded uniforms, creepy masked guards, and endless, windowless metal rooms.  Realizing immediately that he's out of his depth, and in a touch of humility I greatly appreciated, Breslin at once utters his safeword—only to find out that the warden he's been told will be here doesn't exist, so that his resort to some kind of code only arouses the curiosity within the sadistic intellect possessed by the svelte, cultured, fey counterpoint to Breslin's musclebound savant, Real Warden Hobbes.

But is there a Passion of the Christ joke?  Yes.  It was great.

Thus is the gravity of Breslin's situation made patent; but, if he didn't come up with an escape plan, it wouldn't be much of an Escape Plan.  Getting the layout will be almost impossible; the routine, difficult as well; but help, well, that's why this movie also stars Arnold Schwarzenegger.

The struggle ensues, with punches and guns, but mainly, and perhaps surprisingly given its performers' pedigrees, with their wits.  And since going any further would just spoil the twists and turns, I'll just say that they do learn the layout of the prison; and they build things; and they trick people; and eventually they must fight their way to freedom in a set-piece worthy of its stars.  Even the action quips, not the movie's only homage to the 80s badass cinema it draws its heroes from, are pretty good, except the last—and I think that is exactly the joke.

Yet there is no arm wrestling.  Caviezel wept.

See Escape Plan and find out for yourself how just plain enjoyable a movie can be.  Do you have to turn off your brain?  Not entirely.  But should you think hard about it?  No, you shouldn't.  It's the warm porridge.  Just eat it.

And, as if to sweeten the deal: does this movie have Sam Neill in it?  You better fucking believe it does.  And they don't even charge extra for the ticket.

P.S.:  It was spoiled for me in other reviews, and I think it's a nice surprise, but at the same time this piece of information was what really compelled me to go see it (as if I wouldn't have already).  In Escape Plan America's favorite immigrant does something that, so far as I know, he has never before done on screen.  Yes, like the Holy Roman Emperor he is: also sprach Arnold Schwarzenegger.
Posted by Hunter Allen at 8:25 PM