The handheld camera is an enemy of all mankind 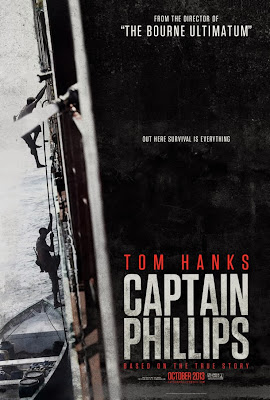 
I don't really watch Paul Greengrass movies.  I owned The Bourne Supremacy at one point (it came with my HD-DVD player—I've never claimed infallibility).  I watched about half of it before succumbing to its video assault and just leaving the room.

Captain Phillips has turned what you could have still called prejudice into judgment: Paul Greengrass sucks.  That he sucks with intent, scienter, and express malice certainly does not make it any better.  The upshot is, I guess I'm not going to be relenting and checking out the supposedly excellent United 93 any time soon.  Well, I know how that movie ends anyway.

It is, of course, primarily the shaky handheld footage that constitutes 90% of Captain Phillips' running time that angers and nauseates me.  High-tension gunfight underway?  Shake the camera.  Turning the Maersk Alabama to avoid a pirate skiff?  Shake the camera.  Checking email?  SHAKE THAT CAMERA, ACKROYD.  Keep Greengrass away from The Michael J. Fox Show; I want to be able to tell when I'm supposed to be laughing at the Parkinson's disease.

Ultimately, I find no pleasure in the irony that a film whose climax rests on a superhuman feat of sharpshooting is filmed with such unsteady hands.  But everyone has mentioned the puky camerawork.  It's not even only that.

Technical exacts aside, compare the results of Greengrass and cinematographer Barry Ackroyd's night scene on the pirate mothership to, say, any of Stanley Kubrick and John Alcott's night scenes in Barry Lyndon.  By "compare," of course, I mean "contrast."

I know that Ackroyd shot some of the later scenes with the U.S. Navy vessels as day for night because of the difficulty/danger of night shooting for those; it's interesting how much better they look.  This sequence also features the solitary excellent shot in the film—an aerial tracking shot that follows a straight line down the tether that ties Phillips' and the pirates' lifeboat to the USS Bainbridge—a shot which I am wholly unsure is real, despite the creditably many real vessels used in Captain Phillips.

Finally, perhaps most damningly, Greengrass has no eye for what is beautiful, or even meaningful.  Allow me to digress to the actual story of the movie.

Captain Phillips opens up, oddly but fittingly, with a brief economic epigram of a prologue.  Richard Phillips is getting dropped off at the airport by his wife.  Over the course of their profound minivan discussion, they openly worry about the loss of opportunity their children will suffer as the collapse of our civilization continues.  Richard invokes the Soylent Green level of competition that now exists for basically any job, no matter how terrible (which I'm sure I wouldn't know anything about), and his words serve as a provoking context for the succeeding scenes of Somali mariners being lined up to get picked for piracy, like it was a game of grade school kickball.

I expect if they had the Internet in this literal sandbox of a village, the unseen warlord that's sent men with guns to draft these seaside fishermen into his pirate fleet would probably get 500 applications a day.  But in Somalia, there's still room for an entry level pirate; refreshingly, they did not demand five years of experience in breaking maritime law as well as top grades from the MBA program at Mogadishu U.  (Though I am pretty sure that the press gang did reject a JD without even calling him for an interview.)

We can leave aside that these two juxtaposed scenes are, as is de rigeur, shot with unnecessary spasticity.  From Somalia we shift location again to the port of Salalah, Oman.  As noted, there is a lot of real stuff in Captain Phillips, such as guided missile destroyers, and of course the Alexandra Maersk, standing in here for her sister ship the Maersk Alabama, the actual subject of the movie which was really taken over by pirates back in 2009.

I expect, then, that "Salalah," though it is not Salalah, is still a real container ship port—in fact, I'm certain it's Norfolk.  Like the naval and civilian vessels, this setting is, in itself, a beautiful, majestic thing.

Relax, it's just Greengrass sticking in a random establishing shot to make sure that you know that time is passing.

The port is stacked with the boxes the container ships carry from one port to another, looking like a giant's toy blocks in their many colors.  Great cranes line the causeways, servicing great ships.  This is the very sinew of the global commerce that both sustains us and sets us against each other.  Yet humans are almost absent; after Phillips leaves his taxi, I'm not sure another person is ever in sight before he boards the Alabama, itself operated by a tiny crew.  Is it not, as I've described, an oppressive visual exclamation point to the two previous scenes?  Well, it is, a little, but I'm not sure Paul Greengrass thought so.  He treats the aerial view of Salalah and the cut to the loading area as a pair of establishing shots and moves on quickly.

Greengrass treats the long and medium shots of the Alabama herself with slightly more care and interest, but not too much.  John McTiernan made love to the Krasniy Oktyabr' and that was just a damned model.  To Greengrass, that all these real things make for gorgeous imagery seems entirely incidental—and practically accidental.  I'm not sure I needed the full Star Trek: The Motion Picture treatment for the Alabama and Salalah, but I like to see things in movies that are extraordinary, and container ships and container ports are extraordinary to most people watching Captain Phillips.

Looking at the trailer again for images, I know there is some good footage of this stuff in the movie; if I hadn't had the "What, that's it?" reaction in the moment, I'd almost wonder if the shakycam just degraded the experience so much that I couldn't enjoy what was there.  Perhaps it did after all.  It is an insidious, evil thing.

So, do all these negatives make Captain Phillips a bad movie?  Far from it.  It's a very good movie that is simply made very ugly and very difficult to watch, especially on the big screen, by purposefully inept bozos.

Without counting its cinematography against it for the time being, Captain Phillips is in all other regards excellent.  The script is superb and thrillingly taut, and in many ways subtle.  It's so natural that you may not even notice as the pirates go from a rudimentary cleverness at the outset to increasingly credulous and just nuts as the hostage situation goes on.  It's clear that they haven't eaten in a while even before they go hunting, that they're running on their supply of khat and cigarettes, and that this supply is increasingly finite.

Each of the four pirates that makes it aboard the Alabama is distinct and interesting in his own right (and even another, who doesn't, has the makings of a character).  They are clear antagonists, but we are invited to sympathize or at least empathize with the rationale behind their evil deeds.  Almost more privateers than pirates, they didn't just up and decide one day to go out and raid ships, after all—"We all have bosses."  Some bosses wield Kalashnikovs and might as well be a government.  The root of their criminality seems to be nothing more than happening to live near the ocean in Somalia.

Bosses with guns do, however, improve morale, if "morale" means "the motivation to jump onto a twenty-foot ladder from a moving skiff, while the other ship it's attached to continues to swerve wildly."

But despite the solid foundation given to the other pirates, Captain Phillips is effectively a two man show, run by Tom Hanks as Phillips and Barkhad Abdi, who plays their leader, Muse.  Abdi's achievement here is a supreme one in terms of physical peformance—you know you have a problem, as Muse does, when your nickname in Somalia is "Skinny."

Abdi sort of looks like a Gray; yet his presence is wholly human, even when he brains a recalcitrant rival pirate with a wrench.  Always does he exude both menace and vulnerability, and it's never a sure thing which will be dominant at any time, but whichever he chooses, it's always perfect.  I have no idea who this guy is and as near as IMDB can tell he's never been in a movie before.  Thus, if Greengrass can be given any credit for Abdi's shockingly strong debut, even 1%, then I must give that credit where it's due.  This guy's great, and while the unfortunate reality is that "African" is probably the limit of his casting appeal, I would love to see him again.

I will look at you.

Of course, Tom Hanks is Tom Hanks, and he is never bad, and usually amazing.  Here he is usual and more.  Capturing the end of Phillips' ordeal, Tom Hanks will act so hard at you that your face will literally peel right off.  I am actually dying from shock, blood loss and infection as I write this.  It's a one-scene Oscar.  (And for this, I give Greengrass zero points.  You did not direct this man and stop pretending you did.)

Overall, despite herculean efforts, the auteur failed to ruin his movie.  With a slight seasickness, I recommend it.  Everything gonna be okay.

P.S. It's a very natural question to ask, "Why don't they just carry fucking guns on merchant ships?"  That's a good question, and the answer appears complicated, and fraught with bullshit (liability and legal issues seem to be the main reasons; a facially terrible argument that pirates would "win the arms race" seems to be another; and of course it's possible that they had guns, but Obama took them).

Of course merchant crews should have access to guns in case of pirate attack.  It's preposterously stupid that they didn't, but what can I say?

P.P.S.:  It's not much use as an employment tool, but the Internet is kind of rad: for all you prospective pirates out there, the Alabama sails again.
Posted by Hunter Allen at 5:53 PM