Attack of the Eye Creature 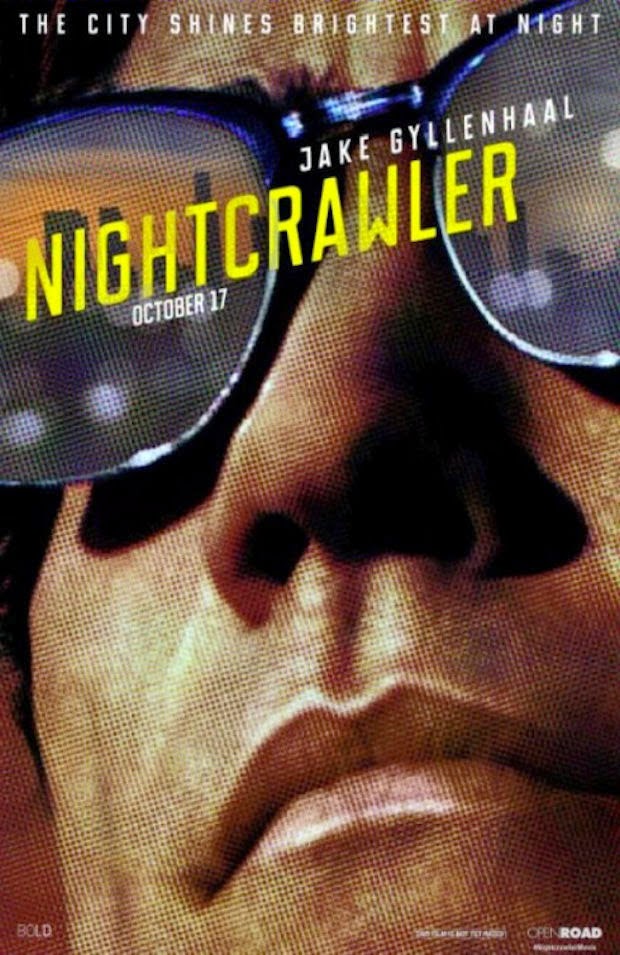 A horrifying portrait of success—and that is, every syllable, an intentional double entendre.

I recently wondered aloud if Jake Gyllenhaal, a routinely good and even more routinely brave actor, had ever played a truly whole person, who knew himself and didn't feel as if he had a piece missing from his personality; I answered that rhetorical question by suggesting that the closest he ever came was Donnie Darko, as I was making something of a joke at the expense of Gyllenhaal's last, risible film, Enemy.  Well, now I have a real answer, and his name is Louis Bloom.  The only problem is that he's a sociopath.  Nightcrawler is his story.

Gyllenhaal is top-billed already, of course, but could easily be credited also as an assistant costume designer, or perhaps special effects artist, for the once-strapping Gyllenhaal wears his suit of newly-emaciated flesh like an uncomfortable disguise that seems unlikely to fool anybody for long.  Beneath it, something unlike us peers out through enormous yet inscrutable eyes.  Body modification is not always great acting, whether the Academy believes it is or not; but Gyllenhaal has done something enormously special, and turned his appearance into deliberate mise-en-scene, in which every element of his physical existence functions to impress upon you that this man has no soul, and that this is what makes him strong.

Remember how Under the Skin ends?  (Or, if you prefer, Jason Goes to Hell?)

We first encounter Louis, unemployed and desperate, stealing scrap metal—and very possibly killing a guard, in between cuts.  Nightcrawler—and Gyllenhaal—make it far too easy to forget that this man's fate is left off camera for a reason, but you never should have.  While he comes from bad, and goes to less bad, Louis soon reverts to the outrageously monstrous; and every step of the way, the script and the actor make it look natural, easy, engaging, and true.

Shortly after this confrontation, Louis tries to turn his illicit business connection with a local construction foreman into a job, selling himself in a canned personal statement that despite lasting less than a minute is spoken so quickly it must qualify as an epic monologue—the first of many, many, and not one without a viciously hilarious charm, Nightcrawler's answer to Howard Beale's mad but provocative ravings.  What we learn from his words is that Louis is the sum total of things he's read on the Internet about how to succeed; what we come to realize is that his 21st century Horatio Alger story is an indictment of all Horatio Alger stories.  Beneath Louis' wheeling, dealing exterior is not a passion for anything, except the wheeling and dealing itself.  Biological urges exist within him, and they shall be satisfied, with as much leverage as it takes, but there is little of the recognizably human.  Don't confuse it, though, with emptiness.  It is something else, that does not have a name. Let us, inaccurately, call it inhumanity, for convenience's sake; the inhumanity of Louis makes him, more than any character in any film I think I could name, a reflection of the spiritless spirit of our age.  Louis is the Economic Animal, in its most carnivorous aspect of all.

But what our young man has not yet found is his outlet, his opportunity.  That all changes when he rubbernecks at a car crash.  He stops—out of boredom, reptilian curiosity, we cannot tell—and makes the acquaintance of Joe Loder—a scumbag, yes, but of our species.  He's a paparazzo of gore, a nightcrawler, a freelance cameraman who scours the city looking for crimes and accidents and blood and death and misery, translating them into video and then into money and the sick schadenfreude on which local TV news thrives.  And Louis knows now what his life's work shall be.  He steals a bike, turns it into store credit at a pawn shop, and the credit into a camcorder and a police scanner.  Like that, he is one of them—and is there a bitchin' montage as he learns the ropes and becomes the best of them?  You bet your ass there is.

Soon, however, just recording the horrors life has to offer is not enough.  Louis' ambitions are unsatisfied: he needs to get to the Next Level.  And you may be surprised at quite how far he will go to get there, because you are attributing feelings to him that simply do not apply.

Even after Duncan Jones and Joe Kosinski—or Steven Spielberg and Tim Burton for that matter—it can't help but be a surprise that this is Dan Gilroy's directorial debut, for it's as assured and polished a debut as there ever was.  He's been a screenwriter for twenty years, and not very consistently.  Indeed, the scripts he has managed to sell do not in the least way suggest a super-classic on his horizon.  It helps to get by, one imagines, when one's spouse is Rene Russo; it helps to get one's movie made despite no track record when one's older brother is the writer of the Bourne series; and making the movie itself is probably easier when your twin brother is an accomplished editor.  But I only point out the family effort because it's interesting, because Nightcrawler is a triumph, after all.  Here, Gilroy does the best work of his life, weaving together themes of economic torpor and class war and racial discord and media satire into a film that is also effortlessly entertaining, even action-movie thrilling.

Both Network and Nightcrawler feature gunplay, but Nightcrawler has a great car chase.  Ace in the Hole, believe it or not, doesn't have either one!  Advantage: Nightcrawler.

Nightcrawler, by its very nature, could only ever have been set in a driver's city, and that city could only ever have been Los Angeles.  The movies have taught me nothing if they haven't taught me that L.A. is the Sodom and Gammorah of all media sin, and Nightcrawler is overweeningly concerned with our prurient interests.  The irony, naturally, is that Nightcrawler itself is an intoxicating dive into a pool of human garbage.  This tension has been present in every great media satire ever made, and Nightcrawler isn't the least unaware that half the damned fun of such things is their own sleazy, self-evident hypocrisy.  This is perhaps why Gone Girl, whilst an extraordinary thriller and more besides, is merely an adequate scolding of the media—because it is smug and superior, rather than ecstatic at the prospect of wallowing in the mud.  In regards Nightcrawler's class comment, I know of no higher praise than to say that it is the perfect double-feature mate for last year's Pain & Gain.

(Nightcrawler is a fine-looking piece of filmmaking, too.  Just to begin is the year's most excellent opening credits sequence, which is outstanding in not even the most slightly unconventional way—even the font for the title card is standard—but is simply and breathtakingly gorgeous, as we pass from Los Angeles landmark to Los Angeles landmark at night.  By the end, Nightcrawler joins Collateral as part of the nuclear argument for digital photography, at least for nighttime shooting.  And the way it turns Gyllenhaal's eyes coal-black is chilling.)

But the most interesting and courageous thing Nightcrawler does is that it never pathologizes Louis Bloom.  It judges his actions—it is not an immoral film—but nonetheless it takes his difference upon its own terms.  He's not broken.  "What if my problem isn't that I don't understand people," as he says to the homeless person he's enslaved, "but that I don't like them?"  Maybe there's no reason why he should.  The novelty of Gilroy's story isn't that it plays with a sociopath, but that it asks one terrifying question about them, expressing the empathic human's secret fear: what if they're better than us?  The man who is less stung by shame and pity and guilt has strength in his deadened feelings; if he cannot feel even fear, how can we call that inhuman, when superhuman is so much more fitting?  The signature moment of Nightcrawler sees Louis staring through his viewfinder down the barrel of a gun and he does not blink.  His villainy is heroic in its scale.

The design of human society as a whole isn't empathetic, it's economic, and to nearly every last one of the other seven billion people on this planet, each of us is only a commodity valued more or less based on our potential to contribute, or—as this is usually far better-rewarded—on the market force we can bring to bear upon others.  And thus each year the world becomes more inhumane—perhaps not actively crueler, for to say that would be to admit an ignorance of all our history—but, it seems, less caring.  Nightcrawler is a tale about who truly has inherited the Earth, and he is not meek.