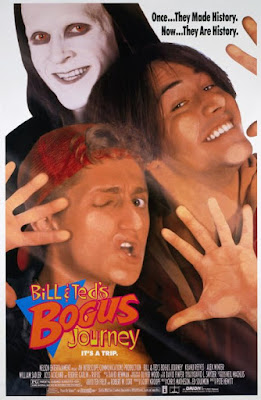 Spoiler alert: high, though once again the Bill and Ted franchise really is a snake eating its own tail 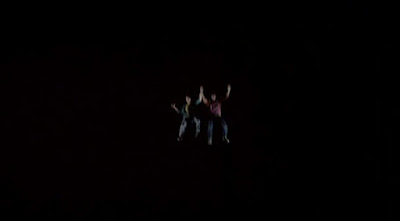 When Excellent Adventure hit reasonably big in 1989, it naturally opened the door to a sequel.  It was tentatively named Bill & Ted Go to Hell, and that title might've been punchy enough, but besides being just a little too on-the-nose, it also wouldn't have come close to encompassing the unprecedented scope of the film it eventually became, Bill & Ted's Bogus Journey.  And much as Excellent Adventure's defining characteristic was its laid-back positivity, "scope" is the best word to describe the sequel's own signal quality: a scope of true cosmic breadth, of which even the first film, itself spanning from our primordial past to the glittering, unfathomable utopia of our future, still could not have dreamed.

Armed with intersecting riffs on The Divine Comedy, The Epic of Gilgamesh, and The Seventh Seal—not to mention a couple of space aliens, a pair of killer robot doubles, and good old-fashioned time travel—Bogus Journey offers nothing less than the millennial fulfillment of Excellent Adventure's promise, and it ends, essentially, with the eschaton.  For two decades now, there's been intermittent talk of yet a third film.  But after a story this big (not to mention this final), where else in God's creation could Bill and Ted possibly go? 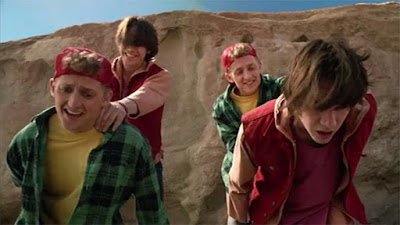 Now, it's in some ways unseemly to speak in such glowing terms about a movie like Bogus Journey—hell, I probably come off as sarcastic—but I am being very serious.  Or, at least, I'm being very sincere—just like Excellent Adventure, there's not much to take seriously about Bogus Journey, but it expands the sincerity of the first film's best moments, until that sincerity embraces every last scene.  The result is a film of far greater urgency and drive, even when its time-loop structure remains faithfully in place (unlike James Cameron and William Wisher, Chris Matheson and Ed Solomon didn't need to change the basic workings of their whole fictional universe in order to write their 1991 time travel sequel).  The ways in which Bogus Journey establishes its drama are many; but just for starters, it adds an actual antagonist, something Excellent Adventure notably lacks.

We come face-to-face with our villain in the very first shot, where we are again transported to the 27th century.  This black-clad man shrieking about "fools" is one Chuck De Nomolos—fascist, physical educator, and sit-up champion of his era (presumably in days gone by).  When he invades his old student Rufus' classroom in the middle of a lesson to steal his time machine—and it feels right that Rufus is a teacher, doesn't it?—De Nomolos takes the opportunity to unveil his plan.  Two of his followers step forward and reveal themselves: the very splitting images of Bill S. Preston, Esq., and Ted "Theodore" Logan, the Wyld Stallyns themselves.  Perfect mechanical duplicates, these Evil Robot Usses (as they'll be dubbed by our real heroes) have been programmed to be total dickweeds, and De Nomolos sends them back to San Dimas, 1991.  Their mission: murder the real Stallyns, then ruin their performance at the fateful Battle of the Bands that, history says, first made their music a global force. 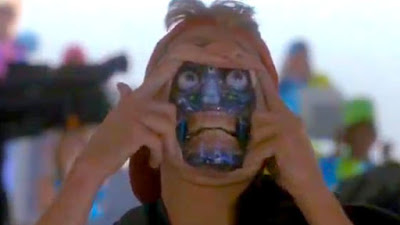 Seems like overkill, but De Nomolos really hates those guys.

In the present, however, Bill and Ted (along with the two princesses Rufus rescued from medieval England, who mattered so much last time I didn't mention them) are only continuing their trend of mediocrity.  But when their doppelgangers arrive, their routine changes permanently: in short order, Bill and Ted are dead, dude.

Obviously, this represents a terrific curveball (and it's part of the reason Bill & Ted Go to Hell was a bad title).  Few films, you know, go so far as to murder their heroes in the first act.  In Bill and Ted's case, it's only the beginning of their journey, which is indeed bogus for them, but most bodacious for us, as the Stallyns trek through a pseudo-Christian cosmology—Heaven, Hell, the house of the Grim Reaper himself—before making their way back to the land of the living with a few new allies and their own answer to the Evil Robots.  In the end, their triumph over the forces of bad puts them in a position where 1)they can finally expend some effort practicing, and 2)they can subsequently rock the faces off the whole watching world, thereby ushering in the next Aeon.

Now, I'm a terrible sucker for mystical journeys in the first instance, and Bogus Journey's is one of the best, introducing a slew of disparate elements that probably wouldn't work that well outside of superhero comics or an avowed comedy like this (robots, aliens, time travel, and the afterlife?); but Goddamn do they ever work here.  Bogus Journey takes the same fundamental joke of Excellent Adventure—once again, the essence of the story is idiots blundering their way through exotic situations they don't understand—but betters it in every possible respect, from quality (the gags here are uniformly superior), to depth (Death, in particular, is a real character in a way that not one of Excellent Adventure's grab-bag of historical figures achieve), to sheer visualization.

The latter deserves much more than just an offhand compliment, since Bogus Journey is arguably the most splendid-looking comedy ever made.  Its visions of the Excellent Future, Heaven, Hell, etc., are rendered with imagination and verve by production designer David Snyder and costume designer Marie France, in what is (without a doubt) the career-best work for both.  Meanwhile, the special effects don't just represent a tremendous improvement over Excellent Adventure—they would almost have to do that—they're as skillful as any movie of its era, bringing to life the designers' intentions with immersive completeness.  And thus, from the all-ages body horror of the Evil Robots' pliable fleshsuits down to the matte paintings standing in for spiritual vistas, Bogus Journey winds up one gorgeous image after another.  New director Peter Hewitt displays more personality than his predecessor Stephen Herek, too, finding an ally in the screenplay's newfound momentum.  Fully willing to let Bogus Journey be suspenseful when it needs to be, Hewitt's direction occasionally takes hard turns into the terrifying.  (His skill is subtle when it comes to the oppressive camerawork around the Evil Robots, but the nightmarish construction of Bogus Journey's Expressionist Hell is impossible to miss for even its least engaged viewer.) 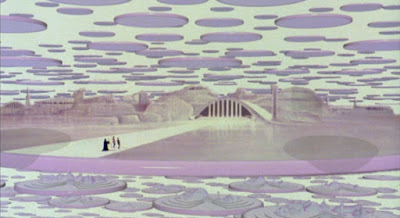 And Heaven's okay, too!

And this artistry is much more important to the film's success than it might ever seem at first glance: without such diligent, even solemn efforts at creating legitimately wondrous realms for our two doofuses to misbehave in, this comedy would never have been as funny as it is.

Bogus Journey, happily, is exceptionally funny; in part, this is because Alex Winter and Keanu Reeves somehow serve up even more perfect versions of Bill and Ted than before—along with frankly ecstatic turns as their evil selves.  One of Bogus Journey's most obvious pleasures—and no less enjoyable for being obvious—is watching Reeves and Winter epitomize the robots' self-declared EVIL without changing anything about their personas.  It's almost surreal—and the denial and defeat of a pair of outright Jungian shadows (in what is generally defended as a slacker comedy, when it's defended at all) probably has at least as much to do with the legitimately mythic feel of the picture as its literal voyages of the soul.  Which brings us to Death, and hence the part where I get to lavish praise after praise upon William Sadler, who takes his Bergman parody and owns it so thoroughly that Seventh Seal winds up just a footnote to the performance, rather than anything close to the whole gag.  Indeed, Sadler has been a man whom I've never not been delighted to see; and yet, playing against his usual type to become a much-abused straight-man, Death might still represent the finest work in a long career that, honestly, should always have been much higher profile than it ever actually was. 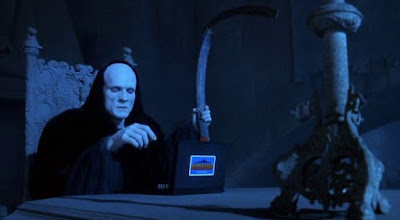 And don't overlook his butt.  (If you've seen Die Harder, then you know what I'm talking about.)

But great performances don't mean we just get to ignore Matheson and Solomon's script, which gives the actors such a solid foundation to work with; and it's certainly worth our while to note that Bogus Journey is where Bill and Ted's most atypical lexicon really comes into its own.  The basic building blocks of their unique dialect, established in Excellent Adventure, find themselves joined by new coinings like the evergreen "station," and now they start to be applied with joyous complexity.  Most of the truly iconic lines from the Bill and Ted saga come from its second half, after all; and, indeed, it's with Bogus Journey that B&T-speak became so iconic and frequently-quoted that actual linguists have written articles about it.

Likewise, the structure is basically flawless: as before, we're dealing with a quest movie, but the decision to render our heroes dead for most of the film demands a somewhat different tenor than Excellent Adventure, where the drama depended upon exactly how (not even "whether or not") Bill and Ted could pass a history class.  This time around the Stallyns' problems of death and damnation go a long way to obscuring the fait accompli that is both a huge part of the franchise's charm as well as its single biggest storytelling obstacle.  Add to this mix De Nomolos' apparent belief that the future can be changed, and you've got a real narrative on your hands, rather than one that lists dangerously toward full-on farce.  Of course, De Nomolos being dead wrong is simultaneously the punchline to one of Bogus Journey's best jokes and a deeply satisfying climax.  (Although it presents a buried curiosity: how didn't he already know it was his own intervention which led to the Wyld Stallyns' establishment as musical messiahs in the first place?)  Anyway, there's probably something here about how reactionaries, by their nature, sow the seeds of their own destruction; or how some folks are just bound and determined to make a hell out of heav'n; but even I don't want to attribute that much allegorical import to the film.  (Plus, the way the gun just teleports into his hand makes me want to kick Hewitt in the shins, for screwing up the rigor of the franchise with its one visible time travel mistake.)

But the epicness of Bogus Journey is absolutely intentional.  Whereas Excellent Adventure, cobbled-together out of Matheson and Solomon's improv show, wound up with a brilliant background mythology virtually by accident—indeed, by executive meddling—the sequel realizes just how important that mythology was to the original's success.  And so it makes the legend of Bill and Ted totally central to its focus, while cannily never sacrificing the gentle fun that made the first one so effervescently likeable, nor ever getting lost up its own anus, the smelly pitfall of self-reflexive franchises everywhere.

The final sequence (extending into a montage of the Stallyns' victory over earthly heinousness) is certainly as funny as the rest of it; but it's more, too, notably in the choice of a song that, by my lights, theoretically could serve as the impetus for a religious movement (it's "God Gave Rock and Roll to You II," by KISS).  Cleverly, though, the editing suggests it's not necessarily diegetic music.  It serves instead as a stand-in, for some unimaginable sound that really could change the human condition.  But the most important thing is what's emphasized here: it isn't that Bill and Ted are funny idiots; it's not even that destiny has finally granted them a capacity for growth; it's the meaning of their message that the film ultimately finds itself most concerned with.  Bogus Journey thereby closes on its strongest possible note—and I'm happy to report that it still gets to me, every single time. 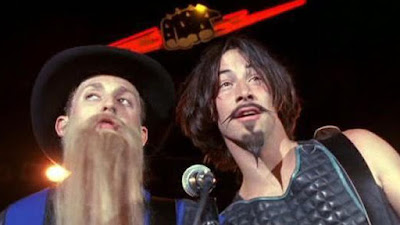