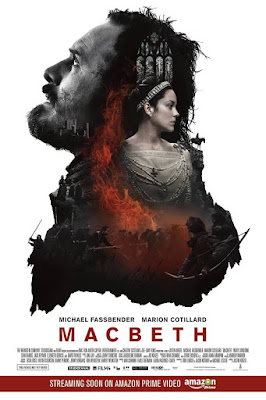 Hey, on the plus side, at least a house full of people didn't have to die to inspire this version.

Macbeth tells the story of the bloody reigns of Duncan I, Macbeth, and Malcolm III—all Kings of Scotland—as reinterpreted by William Shakespeare in the play he wrote during the reign of James VI and I of Scotland and England, six hundred years down the line.  Thus the play, and therefore this film, concern themselves with the tragic fiction of Macbeth, the Thane of Glamis, whom we first meet as a vassal and friend to Duncan.  Presently, Macbeth faces an army led by the Thane of Cawdor, who has turned against the king; defeating them in pitched battle, Macbeth is granted the Cawdor's title and his fief by Duncan, in exchange for the traitor's head.  But what Duncan doesn't know—and it's too bad, since it seals his fate—is that after the battle, Macbeth and his man Banquo had a vision of four weird sisters, whose prophecies concern Macbeth's future as the king, and Banquo's as a father of kings.  Macbeth is at first dismissive, but when their more innocuous predictions start to come true, and when he unwisely tells his wife of his vision, he is pushed from both within and without to make the sisters' foretelling a reality.  Ultimately bullied into treason by the English language's most iconic nag, Macbeth murders Duncan after extending him lodging, and—pinning the deed on his drugged chamberlains—assumes the kingship, at which point he immediately becomes a crazy person wracked with guilt and paranoia.  Macbeth thus carries out a campaign of tyranny against his political enemies—real and imagined—culminating in the murder of his friend Banquo, and the wife and children of the nobleman Macduff.  Macduff himself flees, but returns alongside Duncan's son Malcolm—and with an English army, fully ten thousand strong.

Faced with the prospect of war, Macbeth goes even crazier.  However, believing himself to be protected from "any man born of woman," as the weird sisters put it, he sallies forth to crush the Scottish rebels and English invaders.  But now Macduff reveals a secret: he was delivered instead by caesarean section, and thus—in one of the literary canon's first dumbassed twist endings—the usurper Macbeth is cut down by his fated nemesis.  Malcolm ascends the Scottish throne, and becomes a kinder, gentler king; at least until such time as Banquo's son shall grow to be a man, and the cycle of trading violence for power begins anew.

And that's how, in Justin Kurzel's telling, a story as mired in contemporary Jacobean politics as Macbeth is transmuted instead into a tale about a bunch of medieval fucks who kept murdering each other until the Enlightenment happened.  Such is the privilege of living four hundred years later: when we witness Kurzel's Macbeth conclude with Banquo's child running headlong into an apocalyptic red sky with his sword in his hand, we have the pleasure of smugly congratulating ourselves upon our own foreknowledge that the line of kings he is destined to begin shall likewise find itself drowned in blood.

Universalizing Shakespearean material is the obligation of the modern adapter, of course, and I doubt we'd have it any other way; whatever metaphorical resonance Macbeth shares with the 1605 Gunpowder Plot in particular, and with the ascension of King James generally, is not likely to interest us very much, and for rather good reason.  Instead, we keep making new productions of Shakespearean tales because their themes are still fresh, because their plots are still interesting, and because watching them performed is kind of like watching someone do gymnastics: it's almost physically exhilirating to behold and, at the end, you wonder how they even did it.

...Unless, that is, they just sullenly grumble through all their lines, which is what they do here.

In anticipation of Justin Kurzel's new adaptation of Macbeth, a play covered by such hacks as Orson Welles, Akira Kurosawa, and Roman Polanski, amongst others, I have endeavored to watch (or rewatch) precisely none of its previous screen adaptations.  On one hand, this means I can make no direct comparisons to earlier adaptations; on the other, it means I didn't sit there in the theater, compelled to make those comparisons.  However, on a third, unexpected hand, it means I occasionally had to search my memory banks for plot points and sometimes even character names, because perhaps the most idiosyncratic quality of Kurzel's Macbeth, even moreso than Adam Arkapaw's frankly phenomenal cinematography, is its mumbled and monotoned line readings, which turn the words of a work that is already rather poetically overwrought into a semi-decipherable slurry of character and portent.  It goes on like this for about an hour—that is, almost exactly half the whole film—till at long fucking last old Michael Fassbender is finally permitted to raise his voice a little bit, and actually act.  And it is only at this point that Macbeth becomes any good, as an adaptation of Shakespeare's play.

Now, let's be clear: I get it.  This Macbeth is a haunted figure in more ways than one; between his dead daughter (an innovation of this adaptation) and his war-ravaged spirit, he's been broken long before he ever accepts his murderous destiny, and the tell, if it needed a tell, is the betrayer's dagger rendered unto him by the hallucinated figure of one of his soldiers, scarcely even a boy, whom we saw killed in the first scene.  Unfortunately, lowering the volume on Macbeth's two leads may be thematically sound, but it is also quite aesthetically displeasing and—not to put too fine a point on it—it's boring.  (Between this and the unbearable slog of American Sniper, I'm beginning to suspect PTSD is an inherently boring malady when presented naturalistically—but to be clear, this is a knock against unwisely-deployed naturalism, not PTSD as such.)

Still, there's probably room for a performance of Macbeth this deeply-interiored, but not one that's this inert.  And there's pretty much no excuse for a Lady Macbeth as taciturn as this one; she is not sexy, she is not believably domineering, she is not notably power-mad, and, indeed, she is not really much of anything, to the extent that her suicide—though it figures far more heavily in this adaptation than the insinuation of it ever does in the play—still happens offscreen.  Even her sleepwalking scene ("Out, damned spot!") is underplayed here—that exclamation point being rather misleading in this context.  It might have even worked, too, if the Lady hadn't been so subdued leading up to it.  Cotillard, despite her best efforts, cannot find any thruline in Kurzel's Lady Macbeth—though, in fairness, it's not like Shakespeare himself offers that much help in this department, either.

Fassbender, however, doesn't have his role pushed into the background by the source material, so once Kurzel is finally ready to ramp things up for the climax—I believe the dividing line is the banquet scene—he gets more of a chance to shine, tearing off his mask of dead-eyed glumness and reverting to his most basic type: a screaming, self-destructive force of nature.  (We love the man here, and this is why.)  Fassbender's Macbeth marches toward his end with an unmistakably suicidal bent, and as unexpected and undesirable as it might be to watch such a super-actor sulk for sixty minutes, perhaps it really was necessary to produce the dizzying effect of the next sixty.  At the very least, I must imagine that Kurzel believed this, even if I do happen to disagree.

But!  If I have my issues with Kurzel's direction of the performances, there is still his direction of everything else, and it's great, most especially that cinematography.  At this point we can put most of the mean things I have to say behind us, because this Macbeth, I strongly suspect, is the single best-looking of any film adaptation of the play—because it just has to be, right?

Leaving aside a very few shaking issues due to handheld camerawork, and an opening battle scene that could have used rather more pageantry than it has, Macbeth is stunning.  Just to get it out of the way, the evocation of Misty Old Scotland, if not exactly novel, is nearly perfect, with the vastnesses of the Highlands smothered in fog and nearly every Goddamned window in the whole film turned into a source for refracted streams of shimmering sunlight.  (Meanwhile, Kurzel cribs shamelessly from the Zack Snyder playbook for his battle scenes, and I assure you that it works as well here as it did in 300, whatever this happens to personally mean to you.)  But the dominating force within Macbeth's visual scheme are the multitude of shots straight out of some forgotten tinted silent film, rendered in oppressive solid color: blues, reds, greens, and sometimes a combination of them in the very same scene.  It throws things off-kilter and gives an outright surrealistic tinge to the film's best moments, where it indulges in cosmic mystery and blatant symbolism.

Kurzel's Macbeth may not, in the final analysis, be all that compelling to listen to—and this is a damning thing to say about a Shakespeare picture!—yet in its intoxicating, transporting beauty, it's always absolutely worth watching.  And, by my lights, that is praise enough for any piece of cinema.