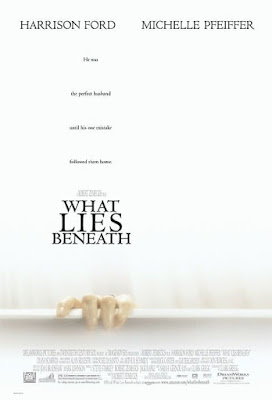 Spoiler alert: moderate, unless you've never seen a movie before, in which case "high"

It is known that the overriding reason that Robert Zemeckis decided to direct Clark Gregg's make-it-scarier rewrite of Sarah Kernochan's gentle-ghost haunter, What Lies Beneath, had comparatively little to do with any desire on Zemeckis' part to make a horror-inflected neo-Hitchcockian thriller.  Now, this isn't to say that he had no desire at all: indeed, he'd asked his bud Steven Spielberg for precisely such a thing, around the same time that he'd entered into a distribution arrangement with Spielberg's DreamWorks on behalf of his own brand-new production company, ImageMovers.  However, Zemeckis, ImageMovers, and DreamWorks were already in pre-production on another project, a little movie called Cast Away, that had been conceived with a built-in delay of a full year.  During that time, its star (one Tom Hanks) would lose all the weight he'd put on for the first part of the film, and also grow a truly extraordinary beard.

And, of course, that's a story for next time; its only present significance is that, even as Spielberg slid the script across the desk to his friend, Zemeckis was thinking about this project in terms of its smallness, and how it could be used to keep his team together during Cast Away's extended hiatus.  One cannot claim to be surprised, therefore, when it turns out that a production founded on make-work resulted in something that looks like make-work.  Yet this implies more than I mean it to, so let's be more precise: Beneath is a tremendously competent motion picture—it is, on occasion, even passionate, when it delves into its formalist gobbledygook—but if you just stretch your hand out toward your screen while it's on, you can actually touch the void where the ambition ought to be.

However, since Beneath exists mainly to keep Zemeckis' band together, perhaps we ought to finally give his partners their full due.  Some of them would turn out to be more-or-less permanent fixtures in his movies; most would wander off completely during the MoCap Years; but all of them were instrumental during his most artistically successful period, from 1985 till the dawn of the millennium.

First, we have Arthur Schmidt, whom I've previously mentioned only briefly.  As Zemeckis' regular editor—Schmidt worked on everything Zemeckis made from Back to the Future through Cast Away—his punchy, often-comic cutting was nearly as big a factor in the Zemeckian style as Zemeckis himself was.  You can find Schmidt's best work for the director in Forrest Gump and Death Becomes Her—not coincidentally, they're Zemeckis' funniest movies.

Next, there's production designer Rick Carter, who started on Back to the Future Part II and stayed through Polar Express.  Now, I have given Carter his due—because I had to, because he really is that fantastic.  Yet his most unforgettable work (either with Zemeckis or without) must be from their very first collaboration, in Carter's creation of Hill Valley's future.

Third, there's Don Burgess, Zemeckis' new cinematographer, who came aboard with Gump.  Burgess purported to fill the shoes of the great Dean Cundey, who'd left Zemeckis after Death Becomes Her so he could go do Jurassic Park, and whose objectively awesome career decision soon found him lensing the mother fucking Flintstones (for which Cundey, perhaps understandably, does not even bother doing an especially good job).  "Purported," I said, and there's really no sense insisting that Burgess has ever been the equal of Cundey in his prime; yet while the subject of our retrospective today might be begging for the Zemeckis/Cundey rapprochement that wouldn't happen till they reunited to make a mercenary BttF short in 2015, Burgess certainly never did anything with Zemeckis that wasn't attractive.  And, as far as Beneath goes, Burgess actually does a pretty darn good imitation of Cundey.  Beneath might lack the inky shadows that characterized Cundey's very best work (that is, with John Carpenter), but otherwise we find Burgess highly engaged with that particular idiom: the long, ethereal tracking shots (reminding one quickly of Halloween); the focal plane tricks (which do the same); the penchant for mirror shots; and a whole lot of other cool flourishes, besides.

In any event, Burgess would get off the MoCap train after shooting Polar Express—but he would come back for Flight (as well as for Zemeckis' upcoming WWII movie, Allied).

(And do I need to mention Alan Silvestri?)

The only major contributor to the Zemeckis Juggernaut who didn't show up to get a paycheck was the great costume designer Joanna Johnston, who'd worked with him since BttF2 (and who would also leave after Polar Express—gosh, if you didn't know better, you'd think that some folks didn't like Zemeckis' new artistic direction!).  Well, for Johnston, sitting out What Lies Beneath was obviously her prerogative, given that Beneath's costumes weren't designed, at least not beyond sending away for a Harvard University T-shirt in Harrison Ford's size.  Even Rick Carter, who clearly didn't have to do very much bespoke production design for Beneath, still had to discover all the film's various locations.  (And, under Carter's watch, each arrives with a genuinely impressive physical naturalism—my favorite choice being the basement office of the psychiatrist our heroine winds up visiting, with tiny windows at the top that offer a glimpse of the traffic constantly moving above their heads.)  Beneath does have a costume designer, however, and Susie DeSanto, Johnston's replacement, does a perfectly good, perfectly quotidian job—a perfectly fair approach for what amounts to perfectly quotidian material.  The film, after all, is mostly about people standing around in their house, and typically in their bedclothes.

The behind-the-camera roll call might suggest to you that I'm avoiding the actual movie that I'm reviewing here.  Well, maybe I am: it's a little boring to talk about.  It does nothing new, nor—outside of a single dynamite setpiece right at the end—does it even do anything especially well.  It's best described as a collection of middling-to-good scenes, punctuated by one great scene, which nonetheless drags itself out into a merely very good scene.

Then the movie ends—with a last shot that reveals, in case you hadn't noticed, that Zemeckis' fetish for technology cannot be stopped.  It comes here in the form of the lousiest CGI snowfall imaginable—right before a last frame gag that turns the snowbound landscape into a ghastly ghostly face, which (of course) looks even worse.  But then, you'll have no doubt remembered Zemeckis' hard-on for CGI already, by the time he gets to that car chase, which is so terribly-composited it looks straight-up rear-projected—and which gets any kind of pass, solely because of Zemeckis' publicized intention to make a Hitchcock knock-off.  Because, God knows, this is exactly what it would look like in a Hitchcock film, if only Hitch had possessed lighter cameras and better gimbols.

Well, the tale's in the telling, and this is the tale of Claire Spencer, wife of Dr. Norman Spencer, an eminent genetic biologist—and if you think this means that Beneath is actually a secret sci-fi movie, it isn't.  And that's a pity, too, because for good or ill, it would've made the movie a lot more interesting; indeed, I'm half-convinced that Gregg and Kernochan actually intended Norman's job to be a feint in that direction.

Unfortunately, this is not Vanilla Sky.  Take that as you will.

Claire has just sent her only daughter (though not Norman's daughter) off to college, and she finds herself wondering just how she'll fill her time.  Lucky for her, a ghost starts terrorizing her, starting small (as they always do) but eventually making itself known plainly enough that Claire has to wonder if she's going mad.  So she seizes upon the concrete, namely her neighbors' loud domestic disputes—and in an extended first act devoted to replaying Rear Window, she gets the idea that Warren Feur has murdered his wife, Mary.

Anyway, Claire gets another lead, and pursues it, and soon finds herself penetrating a mystery that cuts right to the heart of her marriage, as well as to the brief spell of amnesia she turns out to have had a year earlier.  If you have not guessed that her husband has a deadly secret by the end of the first hour (you will probably have guessed it before you got to the DVD menu screen, but let's be scrupulously fair here), it is solely because you've somehow gotten it into your dumb brain that Norman has instead been conducting awesomely unethical genetic experiments upon his poor wife.  As previously established, this is exceedingly not the case; and thus what we're left with is a ghost bent on revenge against Norman for her death, even if the details remain to be filled in, which they will be, and this is by far the most satisfying part of the film.  It leads to the one part of the movie that is well-known—I might hazard that it's even famous—a certain sequence in a bathtub that is 100% worthy of Hitchcock (or even De Palma!), and which exercises the hell out of the thriller muscles that no one could have rightly predicted that Robert Zemeckis even had.

Put it in a 100 minute movie with the exact same plot, and you've probably got a masterpiece.

The result is an extremely likeable movie that you'd nonetheless have a rather hard time recommending—or even discussing beyond its low-impact genre pleasures.  It's well-shot; it's quite effectively creepy; it's well-acted.  (The latter owes more, however, to Michelle Pfeifer's unraveling performance than it does to Ford, who does well enough, but is undercut mightily in the film's other big misstep, the few stray lines which have Norman descend into crass sex villainy, instead of letting Ford keep riding the wave of inner conflict that, heretofore, had made him a far more interesting antagonist.)

There are piddlier problems, too: the ghost waits a whole year to show up, manifesting with more narrative convenience than internal logic; and that big, spoilery trailer moment offers the sour taste of ghostly possession, something that hasn't been so much as hinted at before, never comes up again, and is self-evidently the film's single worst scene.  (Plus, it's played stupidly broadly by Pfeiffer, under Zemeckis' obvious coaching; they reach out for a zany, horror-laced sexiness, which avails them neither sexiness nor horror.  They do make the movie briefly zany, but in a film played this straight, that's plainly no compliment.)

And yet as the clearest-cut example of jobbing in Zemeckis' whole filmography (with the possible exception of Romancing the Stone), What Lies Beneath is honestly better than it ought to be.  Its origins betray themselves routinely; but if you want something you can just sit down, and lazily enjoy, you could do worse than something that might have been lazily made, but was somehow still made this well.