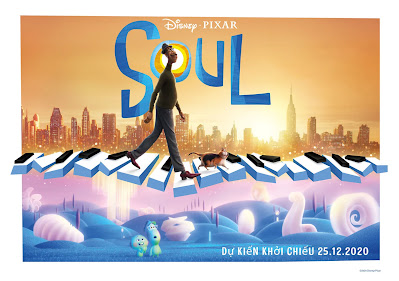 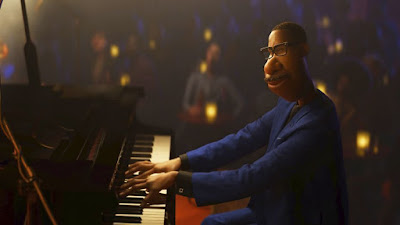 I don't know if Soul is a "return to form" for Pixar, exactly, though it is close enough that if you wanted to call it that, I wouldn't object to the description.  It is, after all, such an extremely "Pixar cartoon": an exploration of middle-aged angst (like the Toy Storys and Incredibleses before it), that makes a very hard pratfall into a hidden magical world governed by its own rules (like so many Pixar movies before it I refuse to even begin to list them), and all done up in the studio's trademarked photorealistic style (like almost every Pixar movie since the last twenty minutes of Monsters University back in 2013).  There is a distinction on this last count, however, for Soul seems to be taking a conscious step back from the flintier aspects of Pixar's photorealism.  Firstly, when Soul is photorealistic, it's not for the sake of uncanny grit, let alone for its own sake; instead, it's with the overriding goal of generating a mood of contemplation and appreciation for all the colors and textures of the places, people, and feelings its photorealism captures.  Soul, therefore, is maybe the first Pixar film since Monsters U. that concerns itself with what their big computers should do rather than just what they could do.  Secondly, at least half of it takes place in an abstracted fantasy realm that outright denies photorealism, going out of its way to flatten its characters into lavender neon lines and prismatic blue smudges, as opposed to, say, Onward, which was as much about how Pixar elves have blood vessels under their skin as it was anything else.
It is, as a result of this and more, the best Pixar original since, I suppose, WALL-E, fully twelve years ago (yeah... I've rewatched Coco), and while I am not absolutely in love with it, and while you needn't go too far back to find a Pixar sequel that's better, Soul definitely rekindles some enthusiasm for the studio as something more than just a well-tooled factory for extending franchises.
Soul, then, is the tale of the last day in the life of Joe Gardner (Jamie Foxx), a middle school music teacher who—of course—once had dreams bigger than managing a bunch of pubescents who, for the most part, aren't even interested in what he's teaching them.  Those ambitions haven't completely faded, however, so even on the day that he finally gets a full-time position, he's willing to throw it away on an unlikely shot at becoming the great jazz pianist he's certain he was always meant to be.  Thus, when Joe gets a break from a former student, and is invited to come play with one of his idols, Dorothea Williams (Angela Bassett), he's sure that this must be destiny opening the door for him.  Which is perhaps the reason why one comic cartoon death after another manifests to strike Joe down as he obliviously makes his way home.  It's the last one, an open manhole, that gets him.
Awaking on a cosmic conveyor belt headed into "the Great Beyond," Joe remains determined to get back—a difficult task, considering he's now just a blue puff, identifiable mostly just by his hat and glasses, evidently such a part of his self-conception that even his astral projection retains them—and, screaming and panicking, he makes his way off the conveyor and falls into another abyss.  This time he lands in "the Great Before," the place where souls are safekept and their personalities developed, before they're shot into bodies down on Earth.  Accepted under false pretenses as a mentor, he is assigned to the most intractable entity to have ever been created, Soul Number 22 (Tina Fey; I'm not sure that her improbably low number is meant to suggest anything, but she's clearly been around a very long time).  The whole point of the Great Before is to ready the souls for existence—most notably giving them their "spark," the passion that will drive them—but 22 has figured out from first principles that while life in the Great Before might be purgatorial, life on Earth seems like straight-up hell.*  She's initially reluctant when Joe hatches a clever scheme to take her Earth pass, so that he can get back to his body, but after he explains that this means she'll get to spend the rest of her eternity literally feeling nothing, she eagerly embraces the idea of cheating both the afterlife and the beforelife in a single stroke.
So if it's an extremely Pixar movie, it's also an extremely Pete Docter movie, specifically.  It's also pretty easily my personal favorite of Docter's works.  (I mean, sure, Up is an all-time great short film, but I don't know what they were thinking when they paired it with that weird feature with the slow kid, the zeppelin, and the talking dog.)  Anyhow, Soul remains driven by Docter's customary preoccupations: being the one who first confirmed the Pixar formula back in Monsters Inc., Soul finds Docter for the second time in a row creating a magical world explicitly intended to explore existence by way of a bunch of anthropomorphized metaphysical concepts who execute their functions within a benign, if somewhat dysfunctional, mystical bureaucracy.  The good news is that for all Soul is doing an Inside Out, it never gets so tangled up in its own rules that it blows up its own third act.  Meanwhile, it upgrades its antecedents, since instead of Herman's Head, Soul is inspired by the likes of A Matter of Life and Death, though I think the most obvious touchstone here is Defending Your Life, at least in terms of Soul's cosmology and message, since Defending Your Life is about earning reincarnation, and Soul is about the loveliness of just being incarnated in the first place.