It's an expression of faith in the mechanics of the world 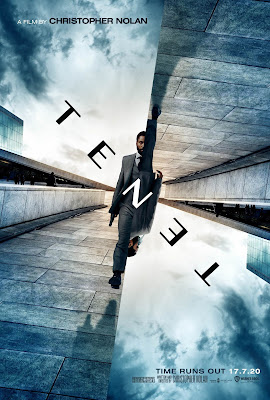 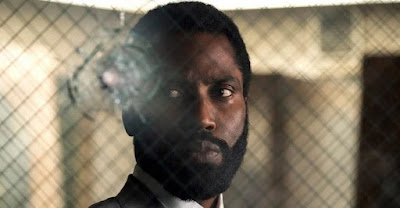 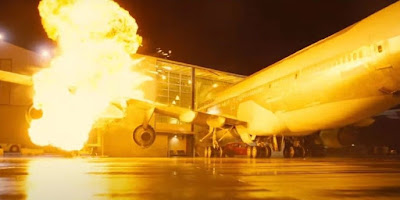 "Russian gangster plots to acquire a superweapon in order to blow up the world, and the good guys have to save the day."  If anything, it's too boilerplate to be anything but faintly embarrassed by, and the parts that try not to be boilerplate don't even help: for some reason, Nolan thought the best way to give his villain a vulnerability was to cobble together a strangely brittle marital drama that is played with just enough nuance and damaged psychology by both Branagh and Debicki—incredibly, Branagh even keeps his accent reined in—that it only emphasizes what cardboard their "cartoon domestic abuser" and "long-suffering mother" characters are made out of.  (Thought experiment: try to imagine these two dating in the first place.)  It's also the most salient expression of a certain dourness that courses throughout the picture—this is why when one says it's "like a Bond movie," one absolutely should add "Daniel Craig-era" to that—and it's not entirely clear that a movie about dudes fighting backwards and the like benefits from elements like "spousal abuse" and "the toll being a CIA man takes on your soul."  It at least cracks a smile sometimes: Pattinson, for the first time in possibly ever, feels like he's having fun with a part, and the eagerness with which Neil runs around on this adventure is what they call "irony"; meanwhile, Washington does the strongest work in the film, mostly just by anchoring it to something sympathetic, but also by imposing at least some personality onto a character who's almost a complete tabula rasa, most effectively when the script allows him to express a certain detached, working-class amusement at the world of Bondian lifestyle porn that duty has thrust him into.
It does leave us with a fairly dry tale, though, and to the extent it tries to find emotional hooks in all sorts of places—with Debicki and Branagh, with Debicki and Washington, with Washington and Branagh—Washington and Pattinson is the only pair who work, because theirs is the only relationship that isn't based on flat declamations of personal philosophy or sullen enmity (rather, it's about exposition, but you take what you can get), and the rest of it is transparently about stringing together certain necessary plot points that will eventually allow Nolan to spend the back half of the film playing with the ideas that really interest him, none of which have much to do with the human objects he's established.  Or not established, despite the 150 minutes we spend with them: it's not even the thing about the movie that's the most video game-like, but you probably noticed that Washington's character doesn't have a name.  There's a fine tradition of nameless protagonists in movies, but they are not usually referred to as "The Protagonist" in dialogue.  Tenet does this, in part because I think Tenet fancies itself some exploration of narrative structure and a hero's journey, and in part because Nolan's screenwriting has just decayed incredibly badly over the past decade or so.
Which is a lot of words to say what the movie's not about, but Tenet spends a great deal of time not being about what it's about.  So what it is about, on the one hand, is a fair amount of extremely impressive Bond-not-Bond stunts, as channeled through Nolan's love of big, practical setpieces that bear down upon you in their weighty realism.  On the other, it's about Nolan's love for manipulating the flow of time, taken to pretty much its utmost and even most broken extreme.

The former is excellent enough you kind of wish he'd split the project, put his time stuff in a genuinely heady sci-fi film, and just done his Bond knockoff with a more agreeable screenplay and the exact same craftspeople: while Hoyte van Hoytema's cinematography captures the size of all those setpieces in crystalline 70mm and IMAX, Nolan and editor Jennifer Lame power right through the footage with the kind of invisible grace that lets them strike with Nolan's customary matter-of-fact bluntness, but also with an elegance that Nolan's action has rarely managed in the past—there is a heist in the middle here that feels like the ultimate Nolan setpiece in a way, in which our protagonist comes up with a plan that is clever but also, fundamentally, just the most gorgeously-applied brute force.  Nolan and Lame also bring distracting twitchiness to several dialogue scenes, but, happily, the balance favors their almost impressionistic take on the spy thriller—there is not a little bit of M:I—Fallout in this (also in the film's self-importance, unfortunately)—and while that's driven in part by the cutting, it might owe even more to that much-despised sound mix, which permits significant stretches of the film to pass effectively dialogue-free while the audio is swallowed up instead by bangs, booms, and, above all, Ludwig Goransson's very extraordinary score, a tense work of structured noise that sometimes resembles Daft Punk and sometimes comes off as anti-music entirely, and is probably the most avant-garde score for a blockbuster I've ever heard.
The fun with time, of course, is what Tenet was sold on, and there may be less of it than you'd think, and also some of it is not necessarily great: the final setpiece, involving armies of NPCs moving backwards and forwards across time is big and loud and imposing, but also chaotic and anonymous and not even trying to be easy to follow, or interesting.  More frequently, however, "not being easy to follow"—that is, confusing!—is maybe even the point, or at least something like the point: Nolan's big idea here is one of the few genuinely new things in action cinema in decades, and I half-wonder if "action cinema" was even the right context for it.  It is cool, but it's more uncanny: it feels incorrect and uncomfortable, and when it pops up you become hyperfocused on how eye-violatingly wrong it is.  There is a horror movie version of Tenet just dying to get out, but I think Nolan, who had to think all this through—and hence I imagine he demystified it for himself a bit—could see only the coolness.  It is, in any event, productive; it never stops being weird as fuck.  It raises questions that are never asked—for example, "what if he fires the gun again?"—while answering questions that have no bearing on anything, like when an extra explains that physical contact with your past self would cause annihilation, which is some serious bullshit to set up and never pay off, especially considering how it (like all the "physics" of Tenet) rests on what seems like an inattentive viewing of half an episode of PBS Space Time and a vague pop awareness of what "CPT transformations" are.  I'm frankly kinda bummed the Protagonist doesn't come out the turnstile left-handed.  (For some reason, it's the "reversed heat exchange" crap that makes me the crabbiest: it's in service of pure contrivance, but if you take the notion seriously, our dude is dead within like ten minutes.)
It also never really becomes anything besides a gimmick: there's a half-formed theme about the interaction between fate and free will, and considering the movie is about the exploration of a block universe from two sides, this functions better than anything else; there is a conversation 135 minutes into the film about the motivations of the antagonistic future, ecological catastrophe and all that, that brings up quandaries that Tenet has not come close to earning the right to discuss, and serves mainly as a reminder that this (again) two-and-a-half-hour film is crying out desperately for a much more elaborate mythology than it receives.  (I was downright shocked that the Sators' son remains a pure maguffin for the spouses to struggle over the entire time, and was never revealed to be the instigator of the future's war upon the past. The film also discusses distinct time travel paradigms to explain why the future's even bothering with its own past, and these differing opinions seem like they'd have been resolved one way or the other, pretty much the exact instant inversion was invented, and, insofar as it's time travel, long before.)
This is part of the film's disappointment, because Nolan's filmography is full of gimmicks, but they've always pointed toward grander, and yes, genuinely humane ideas, from the sensation of a neverending present tense in Dunkirk to the inward pull of fantasy in Inception.  Hell, even the supreme nonsense of Interstellar has heart.  But Tenet also creates some of the most alienating and strange visions imaginable, on top of some genuinely awesome spy thriller action, so even if it offers nothing else, is that really not enough?  I mean, not enough to die for, but I'd recommend the movie.
Score: 7/10
Posted by Hunter Allen at 11:21 PM