Hadouk—sorry! I've got the wrong set of catchphrases here 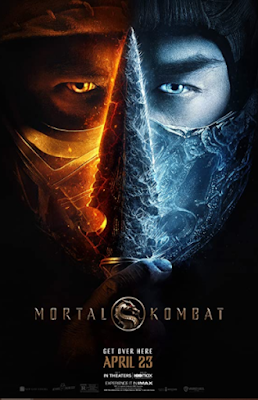 You'll note I didn't quite get to "the Mortal Kombat tournament," but Mortal Kombat doesn't either, or if it does, it's awfully foggy about whether its finale "counts."  Nevertheless, I'll give it this: Cole's a boring stock hero and when he's not he's a full-on cipher, and Tan is not elevating either function, but as an innocent, wide-eyed naïf he is not the worst possible lens by which to experience our awakening to the mysteries of Mortal Kombat, and once we've had our appetites whetted by Sub-Zero in the prologue, there should be a lot to find tantalizing about this secret battle for the freedom of humanity, particularly as the same blue ninja, four centuries later, starts summoning ice meteors out of the sky on a hot June night, and even once you escape him, you keep running into lizard people and kung fu masters with fire coming out of their hands.  Not to even mention Kung Lao's hat.
Which is why, though I think Cole being here at all is what's fatal to this thing as an adaptation (and, in combination with a middle act that grinds the movie's momentum to a crawl in pursuit of training scenes and a foregone conclusion, maybe what's fatal to it as a story), what's ruins it as cinema is just the awful way the screenwriters and first-time director Simon McQuoid dispel mystery every single chance they get.  Worried you might not be able to keep up with the story of a video game, they respond with deadening expository dialogue from every possible corner—which is, somehow, also arbitrarily-ladled out.  Further worried you might be frightened by supernatural beings intruding into Earthly affairs—even though that's what the fucking film is about, and if we're supposed to align with Cole we should find it frightening indeed—McQuoid fixes early upon a strategy from Power Rangers, always starting any given sequence with a cutaway to Outworld so that we are never confronted with any of these bizarre and vivid monsters without being warned five minutes ahead of time first.  It also helps disabuse us of any bizarre and vivid ideas we might've gotten about Outworld itself, as we're subjected to a place that's 95% rock quarry and 5% desperate CG tchotchkes to make the rock quarry "cool."  I'm not sure anybody here acquits themselves more poorly than production designer Naaman Marshall.  He clearly wasn't given much in the way of resources, but even on a shoestring—and $95 million should not be a shoestring—there ought to have been some way of translating the Hong-Kong/heavy-metal-album/fantasy-novel-cover aesthetic of MK into what is, at least, blockbuster-lite.
Transitions aren't really McQuoid's strong suit in any case: besides the choppy flow of the first half and the disaster of the finale, it's sometimes embarrassingly clear when the second unit hands things off to the film's actual "director."  The shift from action to post-script after Scorpion's conclusive battle shouldn't even have found its way into a professional feature film, with Scorpion taking his mask off and putting it back on, over and over every time he says a line, making him look more like a chickenshit covid denialist than the ninja who broke out of hell.  (So, clearly, a lot of things kill the story here, but I think what desecrates the story's corpse is how they handle Scorpion, which winds up absurdly superfluous.  It's hard not to be suspicious that the reason Cole was even pulled from the void in the first place was to wear the yellow, and when that was derailed for a Scorpion/Sub-Zero mini-movie in the midst of this other movie, it left everyone scrambling to try to find anything interesting for Cole to do, or even an interesting power set for Cole to have.  They failed hard, making his arcana'd form possibly the least Mortal Kombaty design in the franchise's history.  Including Stryker.  Say, if you wanted to have gotten political, Stryker would've been fun!)
There are those who claim that Mortal Kombat succeeds as an adaptation solely on the basis that this one's R-rated, and has more and better martial arts, and it has the fatalities, man.  The martial arts are mediocre-to-decent.  But, in individual moments, it has the fatalities—it's at least acceptably gory, and the digital sheen of the blood and guts honestly recalls the game's aesthetic better than more legitimately realistic gore would.  One bit with Kung Lao is priceless (it is also the other moment I found surprising: I'll give it some genuine credit for being a movie where a female villain is not obliged as if by law of nature to meet her end at the hands of a female hero).  It also asks you to pay for these bitchin' moments with a lot of deeply annoying, largely-context-free references to famous lines from the video game, like "flawless victory" and "finish him" and, for some specious reason, "Kano wins."  Basically a lot of the movie is founded on the questionable pleasure of recognition, far more than is seemly, far more than would ever work, to the point you expect Dan Forden to pop up and shout, "Toasty!", and apparently this did in fact almost happen.  It also demands an even dearer price, in the form of a montage of battles in which, suddenly, teleportation is a thing, and which, theoretically, serves as the climax.  Though it eventually leads into the one personalized conflict in the film (between secondary or, arguably, tertiary characters), it resembles a trailer for a movie more than any actually functional or exciting scene from one.  This fits: Mortal Kombat feels like they forgot to make half the film.  Jesus, I think it wants to look like a gameplay montage.  And I say this as someone who actually does watch a lot of fighting game tournament play: it fails on this level.

This Goro also sucks.
It's not usually actively painful, at least: the ensemble beyond Tan offers some personality, particularly in Lin and Huang as the old hands (and in Damon Harriman's curious choice to overdub the villain Kabal's voice in an impression of an Evil Ray Romano).  I'll grudgingly admit that Lawson is the movie's MVP, giving us a type you rarely see these days as an unapologetically-nasty Kano, so intentionally-irritating he occasionally swings back around to funny and charismatic.  The best performance belongs to Taslim, however, and this seems counterintuitive, given Sub-Zero has, like, ten lines; but Taslim brings his experience with much better martial arts cinema to actually make his fight scenes part of his performance, even using the mask to enhance that performance by having it call attention to what he's doing with his eyes, particularly in one excellent moment where Sub-Zero silently reflects on the nature of consequences and, I think, concludes he's had a pretty good run, considering.  Grace notes like that are few and far between in Mortal Kombat, sadly.  It's the kind of mess you thought studio filmmaking had evolved out of over a decade ago, though it seems to be back in fashion at Warners with a vengeance.  The bastards laid off the Archive staff, and this is where their money goes?
Score: 4/10
Posted by Hunter Allen at 11:37 PM