What a disaster: Only you can prevent them 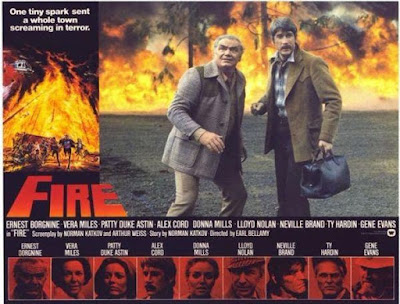 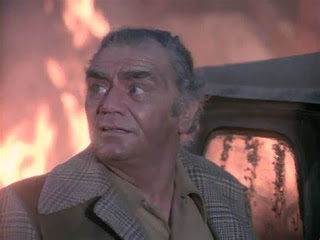 As we've discussed, almost as soon as the decade began and two of its dominant trends had manifested, they'd combined, with God knows how many TV movies about disasters cropping up in the wake of Airport's surprise blockbusting success.  God knows what the first one was, too, though by 1976 crappy TV-sized disaster flicks had become such bustling business that the big screen's foremost impresario of disaster, Irwin Allen, had deigned to produce a clutch of them for Warner Bros. Television, albeit in what I'm afraid may have mostly amounted to the exploitation of his name.  Allen's second television disaster film, Fire, aired on NBC on May 8th, 1977, and while it at least partially corrects the deficiencies of his first, the previous year's Flood, it might be a worse movie anyway, and of course Flood wasn't exactly "good" in the first place.  The reasons for their respective sub-mediocrity are different, however, and despite coming out of the same disaster factory, they're surprisingly distinct works.  Or at least as distinct as two TV movies in the same genre, produced by the same guy, directed by the same guy, and funded under the same contract could get, even if those stark, arguably-lazy titles make it clear that they were thought of as a paired set.  (You'll frequently see Fire stylized "Fire!" with the exclamation point, just like Flood—or "Flood!"—though as with Flood, the film's own title card does not call it that, so neither shall I.)
Well, as Flood had made a catastrophe out of a man-made lake in rural Oregon, Fire returns east of the Cascades to find its disaster, now taking the form of Flood's elemental opposite, a forest ablaze.  The small country town in danger this time is Silverton, and its livelihood, it seems, is a combination of the lumber industry and tourism.  Thus perhaps it was inevitable that the owner of its mill, Sam Brisbane (Ernest Borgnine, perhaps representing Allen's single biggest contribution to his TV movies so far, in that Borgnine wasn't just in The Poseidon Adventure, he was practically its co-lead), and the owner of its nicest lodge, Martha Wagner (Vera Miles, representing a non-trivial "get" herself), have begun to cautiously court one another in their waning years, now that Martha's gotten over the loss of her dead husband, her grief having faded into something more like satisfaction with her new independence.
In the meantime, a pair of Martha's guests, medical doctors Peggy and Alex Wilson (Patty Duke and Alex Cord), have reached the end of the road for their marriage, with their ambitions for their respective careers having put a continent's worth of distance between them, and as one prepares to go to Los Angeles and the other New York, they've reluctantly decided that this time the separation should take and there's no other answer but divorce.  But as they head back to civilization, and to their divergent lives, they see a column of smoke rise up behind them; this, as we know but they don't yet, is the forest fire that sparked up a few hours ago, when one of the convict slaves of Oregon's forestry department, Larry Durant (Neville Brand), threw a cigarette into some dry pine, with the express hope of starting a fire so that he and his pal, the wrongly-convicted Frank (Erik Estrada), can escape in the confusion.  They may yet have their chance, since the fire grows quickly out of control till it threatens everybody in Silverton, all those mentioned and more besides (not least the little girl who got separated from her group on a field trip and wound up trapped by the flames), and some of them will live, and some of them will die, in much the manner we've become accustomed to in these things. 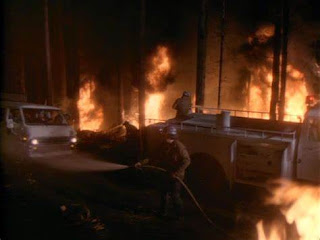 So: not one single thing about that sounds like it shouldn't work, and it even kind of does, at least until it doesn't.  But you can see what I mean when I say how distinct Fire is from Flood, and not just in the mode of its destruction; the tenor of its story is entirely different too, with Fire repudiating the cynical frustration and suspense of Flood, which gave that first TV movie all its better material, in favor of plunging us, pretty much the very instant its sketched out its characters, into the maw of a raging forest fire.  This isn't necessarily a bad idea on its own, and I wonder if there was a conscious effort by Allen, director Earl Bellamy, and the screenwriters to distinguish Fire from Flood's reasonably-taut small-town political drama and make this one all about the spectacle.  Maybe it was; it probably helped that you can burn shit on a budget and in relative safety (and that there was plenty of stock footage of Northwestern wildfires to be used, and Bellamy uses a lot of it), whereas creating anything remotely resembling a credible flood was far beyond WBTV's willingness to fund.  And so that's just different, neither better nor worse in conception, and frankly a great deal better in execution, inasmuch as this disaster film's disaster actually feels like a disaster, and not just people pretending to struggle in a dirty swimming pool, or scale-models of dams collapsing.
Fire begins to falter, however, about as quickly as we get to those characters.  Most noticeably, those stories are not created equally, and certainly not cast with the same care; Estrada and Brand do alright as criminals thrust into morally-queasy alliance, and Borgnine and Miles actually bring real sincerity to their old sweetheart roles in ways that make every other actor in the movie look like amateur-hour garbage.  But nobody looks more like garbage than Duke and Cord, and especially Cord, whose line reads are so strange and inhuman he frequently comes off like he's ADRing himself and not even acting in the same room as Duke, and his dialogue, in any event, is almost exclusively a bunch of stilted, "let us describe our one-note personalities to each other" character exposition.  (Then there are the tertiary plotlines which feel aggressively instrumental, like Donna Mills's schoolteacher, who's introduced in the same scene that she loses the little girl in, and gets to pass out in hysterics without, for some damn reason, managing to actually pass out of the movie.  She remains a fixture in the innkeeper plot, and a focus for concern for Miles's character, the entire rest of the way.)
But we can work with that!  After all, nuanced, well-fed character dramas and avoidance of bottom-of-the-barrel cliché are more like luxuries than requirements for the disaster genre.  (And Fire isn't even that lousy at it anyway: it's one of the few movies I'd call "bad" that I'll admit got me to tear up, without also feeling like the film had unfairly bullied me into it; and that's even with Allen, despite casting an Old Hollywood actress as per his formula, mixing that formula up and not executing her in the third act simply to hurt you.  I mean, obviously, he executes somebody else instead; it's still a disaster movie.)
The problem is that, after about a half hour of its 97 minute runtime, it always feels like it's spinning its wheels, barely making an effort to do anything besides offer a framework for TV-budget vistas of a burning forest.  It does manage those vistas: in no way outside of "Irwin Allen productions" would one even think of comparing this to The Towering Inferno, but there remains a lot of very tangible fire to look at here.  Some of those fires were set for the film, and others were taken from archival sources, but Bellamy integrates the stock footage pretty well, so that, for example, a scene of a fleeing bear that causes a car crash is recognizably a work of editing, but never distractingly so.  We even get some rad deaths, which Flood refused to provide; I'm not sure why the tree surgeon caught on fire, let alone so quickly, but a burning man falling forty feet through the air is, if we're willing to admit it, precisely the kind of arbitrary and painful demise we tuned in to see. 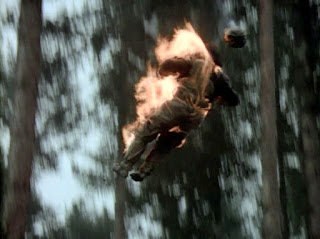 Unfortunately, it kind of just blends together after a while, and not in a good way that suggests exhaustion, or overwhelming, hopeless danger, or anything like that.  Though the approach provides a few charming grace notes (a firefighter saving a rabbit; an insert shot of the "Welcome to Silverton!" sign at the city limits burning), Fire feels like it's dawdling around rather than pursuing any coherent plots within its overarching disaster, and even as the blaze encroaches on Silverton, things scarcely feel like they're escalating.  It's somehow lumpy and featurelessly smooth simultaneously, with potential dramas cut short long before they've been exhausted, and others brought back up at the end with an audible, "oh, right, the movie was about that, too."  I am genuinely astounded that they resolve the missing girl subplot as early as they do; I don't think half the movie's passed before she's rescued and the stakes of the movie just get thrown away into a void.  (I'm almost as astounded that Estrada's escape plot and the little girl's plot never intersect—his character's choice between heroism and selfishness pivots instead upon an entirely different set of circumstances.)  Fire also showcases one of the worst scenes I've ever seen in a movie, involving one of the kids who's locked himself in a room in the inn in order to, apparently, hide from the fire; and it tries to find something to say about childish panic, I guess, but the child actor is barely nonplussed and the lad's written as so fucking dumb that Vera Miles has to explain to him how to unlock the door that he locked in the first place.  Still, there is nothing structurally lumpier than the film's absurdly awful "finale," which invents an entirely new situation that's never been so much as alluded to before, with a character drafted into moving a tanker full of high-octane fuel and not dying when it explodes.
I almost thought they were doing something bold with that.  They'd expended so much unnecessary energy on assuring us that the predictable denouement for one of its plots would be exactly what we thought it would be, that I wondered if it was actually a fake-out all along.  I briefly thought I could glimpse the nihilistic Allen of Poseidon and Inferno back in full force, reminding us that the universe doesn't give a single, solitary damn about human life or human love.  Instead, the whole scene feels like a shitty little afterthought, like Allen and Bellamy had scrimped enough money out of the budget after principal photography was done that they could blow up a truck full of gasoline as a treat for themselves.  I suppose that middling practical pyrotechnics were so rare in 70s cinema that any excuse to indulge in them must be good enough, right?  That's kind of Fire's whole problem, and in that way it's not distinct from Flood: it's just as transparently perfunctory, so that even when elements of it do work, or at least work well enough—like Borgnine and Miles, or the physicality of the fire and smoke—they still feel more like accidents of a process that nobody really cared about.
Score: 5/10
Posted by Hunter Allen at 2:45 AM