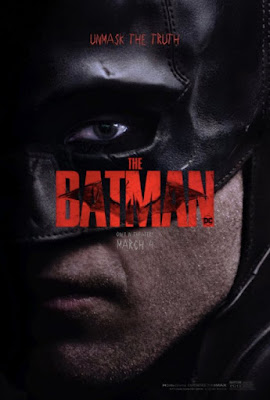 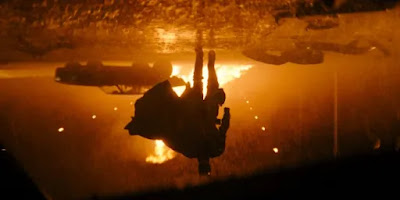 In its way, The Batman is utterly on-brand: one more long, unrelentingly dour DC movie laboring in the long shadow cast by The Dark Knight, brought to fruition after a troublesome development cycle by a director who's shaping up to be modern populist cinema's very dourest motherfucker, Matt Reeves, who truly is kind of like Christopher Nolan, if you took the auteurist obsessions out and replaced them with a depressed sort of movie-movie geekdom.  Honestly, he's kind of the perfect guy for a Batman project if you're after a very stereotyped Batman rooted body and soul in 90s and 00s grimdark cliche.  Splitting the difference, Reeves's approach—technical capability married to classical storytelling, with a tendency towards situating his heroes in mythic-feeling landscapes and driving them with elemental motivations—worked pretty well for his two entries in the recent Planet of the Apes trilogy, Dawn and War, which were about the downfall of humanity in favor of a confederation of emotionally-purer successor species.  But it may also be why Dawn has no personality, War has a personality simply because "finality" is a good substitute (though it also imports a personality from Apocalypse Now, in order to cover any remaining deficit), and the first film in that trilogy, Rise of the Planet of the Apes, directed by Rupert Wyatt, was better than either of its follow-ups.  Nevertheless, going by box office receipts, it does seem that "90s grimdark cliche" is exactly what audiences were after for their Batman, and, hell, it's a perfectly reasonable thing to want as far as Batman goes.
So there were a lot worse people to have given the job to than Reeves, who makes predominantly pristine popcorn films that are always supremely watchable (well, give or take a Cloverfield) even if they're usually not all that interesting, at least outside of a neat visual idea here or there, or sometimes a particular performance, or, as in The Batman's case, an occasional "you should really just relax" moment where things lurch from a movie about smart people made by people of average intelligence to something actively idiotic.  (The big and oft-highlighted freeway chase is one of these.  I'm entirely capable of stopping myself from asking the question "hey, did Batman just kill fifty people?", but the spectacle should mute this objection entirely.  At the very least, the climactic reveal of the Batmobile emerging from the demolition derby flames should happen in a single take rather than get interrupted with a reverse-angle insert.)  And after Joker, maybe The Batman is extremely, abominably on-brand: a Batman adventure that, in seeking a grimy, grungy Gotham, rips off other, vastly more serious movies by way of hollow pastiche.
I realize I'm making it sound like I hold it in contempt, yet if truth be told, it's the best superhero movie in some small while.  That's a fairly low bar—thanks MCU—but an identifiable one.  Of course, it turns out that one of the things that had elevated it to "the best" is going to get ruined in the months to come.  A film I'd naively hoped was a closed-off Elsewords-style one-off won't just get sequels (begrudgingly, that's fair enough), but it's getting television spinoffs, which is just baffling (at least one, The Penguin, concerning a character who makes, if any impression, a negative impression in the film itself, and we basically already got exactly this, "a show about the rise of Penguin to power," only five or six years ago, when Gotham was still something new and not terrible).  But you can't take points off a movie just because it reflects a desperate and barren age.  Well, you can, but you shouldn't.