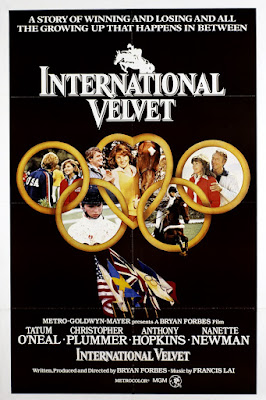 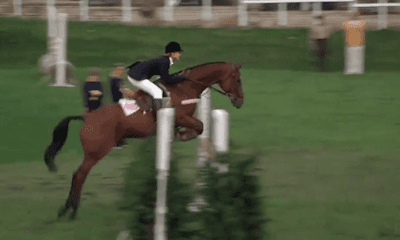 I hate being wrong, it's embarrassing.  So I will not say, flatly, that 1978's International Velvet was cinema's very first true legacy sequel, though it is very tempting to do so.  I am, however, quite sure that it beats the "I'm neither paid nor actually interested enough in the subject to do anything besides a cursory Google search" contender, The Color of Money, by a good eight years.  It is, in any case, a very early example of the legacy sequel, and wow, is it ever the malfunctioning prototype.
It does tick most of the boxes on the checklist: it tries to rhyme the original film's narrative with a new character who, for bonus points, is related to and is therefore literally the legacy of the protagonist from the original film; it assumes you liked the original protagonist, and therefore wish to see them get closure; it has callbacks; but it also realizes it needs to distinguish itself in some way beyond "generational recapitulation," and so strikes out into related-but-different territories; it banks on the brand name in a title that promises an escalation of the action.  Objectively-speaking, then, this 34-years-later follow-up to Clarence Brown's 1944 masterpiece National Velvet does everything a legacy sequel is "supposed" to do.  It merely does them horribly poorly.
Some of the ways it fails, of course, are pretty obvious.  Some are so obvious they're barely worth harping on at all, starting with that title International Velvet, which I'm certain I'd find cleverer and less grating if the movie were remotely good or if everything that made it "international" didn't make it worse.  But let's just stick with the obvious problems within the film, most egregiously the inability to secure the participation of any of the first film's cast, and not just Elizabeth Taylor, but Mickey Rooney or Angela Lansbury or Jackie Jenkins or anyone, Rooney, in particular, being a "we didn't even try" omission considering he was willing to trade on his performance as Mi Taylor in Black Stallion barely even one year later.  Which probably makes that completely-unrelated film a better legacy sequel to National Velvet all by itself.  Mi Taylor isn't even mentioned in this movie, though, and perhaps he wouldn't strictly need to be.  Velvet Brown is, however.  I cannot tell you if Taylor was actually approached.  She might've said no for several good reasons.  But I guess they must not have asked her, because when Elizabeth Taylor says "no," that's when you start restructuring the movie around Mi, since I'm not sure Rooney ever said "no" to anything. 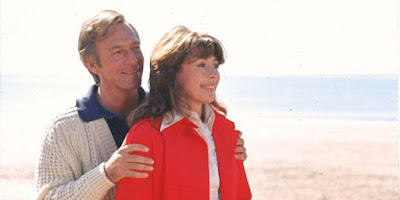 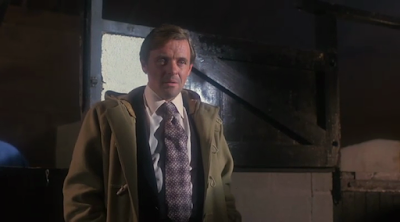 There's some good here, albeit even the best is bound up with the bad, exclusively revolving around Newman and Plummer.  (Hopkins is also effective, on a line-to-line basis, as Sarah's aloof coach—he's at least modestly funny—but the only reason the role isn't totally stock is because he's so strictly business that he's incapable of actually having an emotional connection with the heroine, so truthfully he's worse than stock.)  Newman and Plummer, anyway, are forwarded enough that you can see how much better—not necessarily worth watching, but better—the movie would have been, if it didn't bother with sports and had just told the story of a middle-aged Velvet Brown, her middle-aged commitment-phobe boyfriend, and their struggle to integrate a random kid into their lives with an aged champion racehorse serving as a token of intergenerational affection.
The good news about this is that Newman and Plummer are genuinely good together, sweet and even sexy.  The bad news is that, partly because this is a 1978 movie that already involves an orphaned girl, teen death by misadventure, and a horse execution, and that we see also requires a 16 year old girl to interact a lot with a 49 year old rake who writes erotica, you start to worry slightly, especially as some of Forbes's framing of Plummer in his chummier interactions with O'Neal is not well-designed to deemphasize those worries.  (Those worries are, thank God, groundless, and it's not really Plummer's fault: Forbes just keeps choosing to use low-angle singles that isolate Plummer and O'Neal and give the former's grins a leering quality; if they were medium two-shots you wouldn't even notice it.  But if I haven't made it clear this is a badly-directed movie on top of everything, let me state that explicitly now: there are literally maybe three good shots in the whole movie, all stacked together, all involving Velvet searching a misty glen for Sarah and sighting a silhouette crossing a hill against the sky atop her horse, because even this bozo can't ruin that.)  The other bad news is implied by the statement "Hopkins plays Sarah's coach": it's astounding and depressing that a sequel to National Velvet would bring back Velvet solely as a maternal figure whose arc runs in complete parallel to her child's, instead of as a mentor ready to dispense a lifetime of horse knowledge as a champion fucking horsewoman.  Velvet doesn't even go to the Olympics!
Newman, meanwhile, is called upon to do voiceover narration for Velvet a lot, possibly because they forgot to put much Velvet in the movie—it's something the careful screenplay of National Velvet would never have required—and, somewhat hilariously, Hopkins is also called upon to do voiceover narration, apropos of nothing except I suppose to explain (not very well) the rules of the equestrian events to us.  Which brings us to the death knell of International Velvet as a sports movie, which is that its rendition of its sport is almost unwatchably dull.  I mean, I dare you to try to watch it: once we hit the Olympics, International Velvet becomes all-but indistinguishable from TV Olympics coverage, twenty-five solid minutes of bland commentary from random male voices, and distant, impersonal shots of competitors whom we've never seen before doing horse tricks.  Even when Velvet enters the field herself this doesn't change—it's the exact same "sportscast" treatment for the heroine as it is the faceless guy from, e.g., Germany.  It's worth pointing out that at the same juncture in National Velvet, Clarence Brown was treating us to brilliantly-presented horse-racing spectacle, and while I don't want to state, categorically, that equestrian eventing is incapable of being exciting in its own right, Forbes didn't do himself many favors by switching to a lonely-looking sport where riders participate one-at-a-time, leading to a bunch of disaggregated clips that would take a great deal more editing acumen just to afford the riders any sense of direct competition with one another.  "Actually looking cool" doesn't even seem to have been a goal.
So that's International Velvet, which trades in the rich emotions, pastoral vibes, fun characters, solid narrative arcs, and even the specific badass sport of National Velvet, for basically just a collection-of-stuff-that-happens, none of which is compelling by itself after about the half hour mark once Sarah gets her horse.  It's a boring movie that's actively offensive in how badly it mistreats the great film it was intended to celebrate.  Hell, it's mean to say about a sixteen year old kid, but O'Neal herself kind of sucks—mostly, she's an unexceptional and unemotive screen presence, but then, Sarah's not even really given much adversity to overcome.  (Besides psychopathic bullies who die before the first act's over, the closest is adversity on her behalf, when it turns out Velvet isn't as wealthy as she appears, which in its middle-class soccer momness still doesn't come within spitting distance of the mythic underdog tale Velvet led in the first film.)  And that's on top of some dubious casting that, counter to every rule in the book (though I guess Taylor broke it in National Velvet) requires O'Neal, over the course of her film's three desultory years, to play older, when she was already a very girlish sixteen, so it's vaguely unsettling that the movie requires her to begin contemplating adult relationships and marriage by the end.  Whenever it's not ugly and nuts, then, it's just drab—the cinematography is pretty much just "late 70s white-tinged sludge"—and I could go on.  But forget "first legacy sequel," International Velvet might be the worst.
Score: 2/10
Posted by Hunter Allen at 10:48 AM