I, not forgetting, "Till death do us part," was outrageously happy, with death in my heart 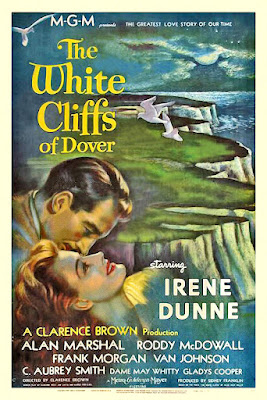 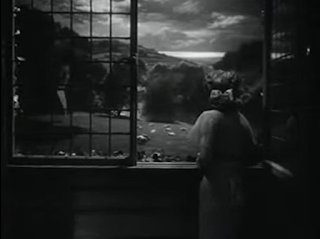 In 1943, Clarence Brown grappled with life and death with The Human Comedy, offering catharsis for an American public stung by what the war had cost them, with some nine million men and women displaced into the service, and perhaps a hundred thousand dead by the time the film was released in March, which meant that for a hundred thousand families, give or take, it had cost them everything already.  I wasn't there, but I like to think The Human Comedy did all that a movie could have done, which admittedly isn't that much even if it's a mawkish war years masterpiece: it contextualized the losses America had suffered and promised that American utopianism would triumph, even if, for many, life remained uncertain and afraid, or worse, certain and grieving.  In 1944, MGM gave Brown a similar task, only this time with Britain—sort-of with Britain, for it does have an American protagonist.  On behalf of Britain, he looked at other successful Britain-set war melodramas of the early 40s, and kind of just mooshed 1940's Waterloo Bridge and 1942's Mrs. Miniver together.
That is, of course, incredibly reductive and unfair to The White Cliffs of Dover (and "an American protagonist" already makes it somewhat distinct); but it is not for those reasons inapt.  I assume composer Herbert Stothart must have agreed: Stothart scored both this and Waterloo Bridge—he also scored Mrs. Miniver, but since I don't recall Mrs. Miniver's music, never mind it—but he seemed to recognize the affinities between the two accurately enough to recycle Waterloo Bridge's idea of using "Auld Lang Syne" to shape a beautiful romance doomed by the onrush of war.  It was based on a work by Alice Duer Miller, famed poet of early 20th century feminism, now turned towards interventionism: having witessed Britain's unexpectedly desperate struggle against the forces of darkness in 1940, Miller authored The White Cliffs, a verse novel about the American wife of a British officer who found herself caught similarly off-guard 26 years before.  It struck an enormous chord with audiences on both sides of the Atlantic, selling over a million copies and therefore becoming what is, I expect, the single most commercially successful work of English language poetry ever, at least in its author's lifetime, despite a wildly-variable meter that makes it frequently-clunky and sometimes-downright-annoying to read, not to mention some truly enervating bullshit non-rhymes, like "lover" and "Dover," or "rather" and "father."  But it has finer points, too, and I am no poetry critic. 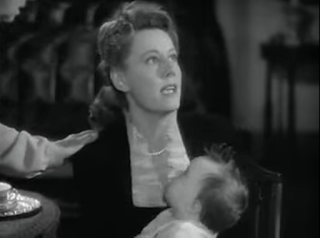 Other than both stories concerning mothers in England, Miller's White Cliffs is, obviously, rather less indebted to Mrs. Miniver than the film winds up.  Miller's verse novel is much more concerned with World War I, and the interwar years, concluding its narrative with the certainty of war, but not the war itself, I expect because, fundamentally, it's an activist poem advocating America's entry into WWII, and not "really" about Britain already being in it.  I can't say how cautiously MGM approached the rare challenge of adapting a poem, but they dutifully did so with The White Cliffs of Dover (though evidently MGM saw fit to clarify precisely which Cretaceous chalk deposits Miller's title referred to).  It's possibly less-unfaithful than the average adaptation from any given medium, but it does decisively widen the poem's scope, taking us all the way up to August 1942, beginning in the aftermath of the disastrous and foolish raid on Dieppe.  Even besides this, it's obliged to add significantly to Miller's loose narrative (it bears noting, also, that the term "verse novel" is misleading itself, as White Cliffs has the word count of a short story, and Robert Nathan is even credited here with providing some "additional verse").  The film doesn't depart radically, or at least not obviously radically, in terms of its plot, but it finds its own resonances, mostly by modifying what was already there.  It can be a little willy-nilly about it, honestly (for example, an older brother to the male lead is replaced with a younger brother, but all the important material regarding the family tradition that an eldest son be named "Percy" remains completely intact, so they are required to further invent another brother, who died decades earlier of childhood illness).  But Miller, obviously, could never have used Dieppe as Brown and his screenwriters do, with horrifying effectiveness in its own right—but, upon its release, also just a month shy of a more successful return to France.
So: we begin as the poem does, which is to say, in hindsight, with Susan, Lady Ashwood (Irene Dunne) already widowed and alone, her son Sir John (Peter Lawford) already having joined his lost father's regiment.  Susan has likewise determined to serve her adoptive country, working as a nurse in a military hospital.  Presently, she awaits the arrival of some three hundred casualties from "the show" across the Channel.  Unable to rest, her thoughts drift back to her own arrival in Britain, many years before, in the April of 1914, alongside her newspaperman father Hiram Dunne (Frank Morgan).  The trip appears to have been mostly her idea, as Hiram hates Britain—he hates its weather (and in response, Britain's weather spites his lumbago), he despises its food, and in truth he might not particularly care for its inhabitants, either.  Accordingly, Susan winds up spending seven days in London and most of them trapped in the walls of their boarding house.  Fortunately, a fellow boarder, gregarious old Colonel Forsythe (C. Aubrey Smith), takes an interest in her plight, and brings her out to an aristocratic ball where no less than the King and Queen shall make an appearance, and in arranging for a more suitable dance partner than himself, he runs across Sir John Ashwood (Alan Marshal).  John has arrived alone, and is meant to be taking care of his friend's Australian cousin as a favor, but in a deft bit of subterfuge Forsythe sends him in Susan's direction; I believe the implication is less that John can't tell Americans and Australians apart, but that he very much refuses to believe she's not his date.  And she is very happy to play along. 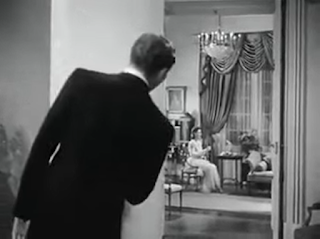 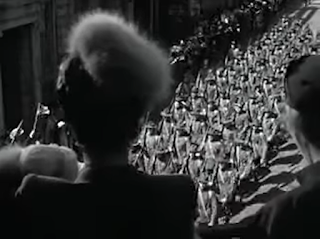 A discussion of the enduring "peace" that John's sacrifice helped create feels sickeningly perverse, and, clearly, it's supposed to; the film continually wonders, sometimes less explicitly, sometimes more, if this war to end wars will be different.  It puts a disquieting spin on the poem's single-minded allegory, and perhaps coming in 1944 with victory assured allowed it to have a more ambivalent attitude about that, with a vastly more complex reaction to the poem's straightforward metaphor of an American woman breeding a soldier on behalf of Britain.  And so, pondering the usefulness of Britain's aristocracy in the twilight of its existence, Brown's film charts the life cycle of a baronet as a collage of quaint privileges and responsibilities, beginning as a morbid coupling in a seaside villa and ultimately depositing him upon the precise spot of his conception, the blown-out ruins of the last (and, moreover, one of the very few) places that his parents ever knew love, on a dubious mission foreordained to fail anyway.  The final shot is troubled and unsettled and shockingly difficult, considering what The White Cliffs of Dover is "meant" to be; even the camera movement, a resolute push-in on Dunne's beatific profile looking in the opposite of the direction she should be at that moment, feels angry and bitter.  It's hard if not entirely impossible to square with the film's propagandistic purpose, let alone its express hope that this time a better world can be born in blood.
It's not one of Brown's masterpieces: it's a little too flimsy in some respects—I said the screenplay has problems, and the main one is that it stumbles after John dies, and truncates the mother/son drama once it finds this as its new groove, basically settling it in a single scene (a baffling little problem is Van Johnson's rejected American suitor, who seems like he should be important somehow, but he's only in one subsequent scene, speaks three lines of dialogue, and vanishes)—and while it's often quite inventive, not every choice comes off.  But it is still, very clearly, the work of a master, presently in his most successful phase.
Score: 8/10
Notes on history: I spent a good thirty minutes trying to find the total casualties that America suffered between December 7th, 1941, and March 2nd, 1943, the release date of The Human Comedy.  It was a task, given how easily-ascertained this figure should be, that seems like it ought to have taken no more than thirty seconds.  I gave up and multiplied the "6600 dead per month" figure by sixteen, which is a rhetorically-effective figure but likely wrong, as I rather doubt America's losses had anything remotely resembling a smooth distribution across the four years of war.  Counting Philippine losses, which is not inappropriate (though few Filipinos would be in a position to enjoy The Human Comedy), the figure is more like 400,000-500,000.  As for the film's treatment of Dieppe, honesty compels me to admit this movie has no idea what to do about Canadians.
Posted by Hunter Allen at 1:37 AM