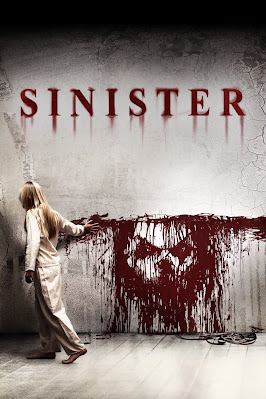 So... is it just too obvious to even talk about?  I feel like I see it mentioned less often than its vital importance to Sinister's power to scare would suggest it should be talked about, and that's that this is a movie about a demon—or a god, if, in Sinister's mythology, there's even any difference—who lives inside movies.  If you watch his movies, he comes for you.  You are watching him right now.  That is a premise that, done right, doesn't just work on the nerves, but gnaws at them, flays them, jumps up and down on what's left of them.
It is done very, very right.  Maybe not entirely perfectly: there's plenty of reasons to get mildly annoyed with Sinister, some of which are bound up in why it works, some of which probably could have been avoided.  The actual big one is its jokey bullshit final frame jump scare, of course, which Derrickson included because he felt his movie had been too heavy, which is the problem—Sinister is extravagantly heavy for a nominally-junky Blumhouse picture, and while well-built jump scares have been a major part of its arsenal (is it not a 2010s horror film?), that final frame gag feels like such a tonal shift that even when it was repeated, as homage, in its much more carnivalesque sequel, it still felt trivializing and dumb.  (It wouldn't even be that bad if it were post-credits, you know?)
The more minor nitpicks can be much more easily ignored, but picking nits is fun.  Particularly, there's a slight clunkiness with this screenplay, which diminishes the characters' offscreen reality, and demands they stick pretty much to their roles without asking inconvenient questions such as might derail the plot ("golly, Mr. Oswalt, where did you get all these images of murder mid-commission?"; "is this definitive video evidence that my house is haunted?"; et cetera).  I'm also slightly bugged by the way the snuff films are staggered across the film.  Of course they need to be, but there's no way our detective-scribe wouldn't watch them immediately in a block.  (Hell, it would've only taken fifteen minutes.)  But pretty much all of this is part of the contract you make with any horror movie, it'll scare you, and you won't be a bitch about what it needs to do to get there; still, there are several different threads here you don't want to pull.  There's a deeper critique that goes back to Sinister's initial release, which is that its demon, Bughuul ("played" by Nicholas King in the sense that standing around menacingly in makeup still earns you a screen credit, and explicated in a fun cameo from Vincent D'Onfrio as a Movie-Movie Occult Professor) sucks.  I don't agree with that, though I suppose I see the argument: he's maybe a little too "frontman for a shitty metal act" (he likewise resembles a fifth member of KISS), but this is as much down to me having seen Sinister 2, where Bughuul is trotted out about twice as often, and the visual suffers badly from being made more pristine.
We don't actually see him much in Sinister, however, and when we do it is almost exclusively in mediated form, just a smeary chunk of grain in blow-ups of digitized frames of Super 8 film, and through the haze and murk, those eyeless black sockets look terrifying.  Conceptually, I think there's not a thing wrong with him.  I'll level with you, the "monster who lives in movies (and, before the movies, lived in images and icons, going back to Babylon and before Babylon, perhaps as long as human hands and human imagination have given him a portal into our world)" makes Bughuul my favorite horror movie monster ever; and the initial impetus for Bughuul, an update of (duh) the Boogeyman, is retrofitted well against the "ancient god" overlay.  (Whereas "Bughuul" is a much cooler name than, e.g., "Pazuzu," if perhaps not a cooler name than "Gozer.")  Being ancient, it even fits that he would be decades behind the times technologically and hanging on to vintage recording media.  He's called "Mr. Boogey" by his child victims, who make their own childish renderings, and if I have one more real complaint about the film (though this is the type of complaint that only comes from watching it many times), I kind of wish they'd gotten more than one PA to draw art that's supposed to have come from a half-dozen different kids.  Okay, two more complaints: I don't like the Hammer horror glowing poison.
Much more forgivably, we have characters who just refuse to turn on the fucking lights, but let's loop back to that in a moment.  Sinister winds up doing a lot more than just frightening you with a concept, and is in fact an astonishingly tight character study.  It helps that Derrickson managed to get Ethan Hawke, who has been an astonishingly good actor since he was an actual child, and very good at these types of hubris-prone characters who are often deluding themselves as to what precisely they're wishing for, even when they get it and they don't like it. 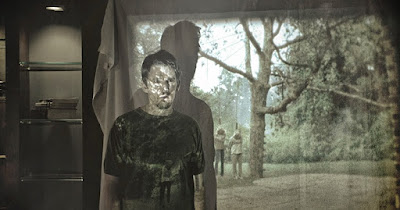