Steven Spielberg, part XXXIX: Hey, I know a song, it's called "While You Were Singing, I Got Stabbed In the Head by a Puerto Rican" 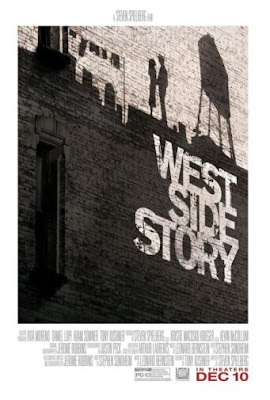 Let's hearken back to the winter of 2021, when I watched and failed to write about Steven Spielberg's West Side Story.  I was both excited and apprehensive about it.  I wanted my favorite director to make something brilliant; I was worried he might just remake a movie that already exists in a perfectly (or, if you prefer, mostly) acceptable form.  This feeling wasn't helped by how obviously it represented an item on the director's bucket list: Spielberg, almost 75 years old upon this movie's release, had spent about ten years out of a fifty year career begging to be allowed to make a film musical, beginning with the fun dance hall number from 1941 (hell, arguably beginning with the cosmic jam session of Close Encounters of the Third Kind), finding space for a musical number in The Color Purple, and ultimately channeling Busby Berkeley with a lovely and mind-bending rendition of "Anything Goes" for the prologue of Indiana Jones and the Temple of Doom, before, whatever reason, he kind of stopped putting musical numbers in his movies after having two in Hook.  Though around that time he married his musical number from Temple of Doom.
We probably don't need to (though we will) refer to Spielberg's oft-cited talent, alongside his old traditional editing partner Michael Kahn (joining him here with his new traditional editing partner, Sarah Broshar) for conjuring, in their many films together, a musical-like rhythm to their action; nor is it strictly necessary to refer to Spielberg's career-long collaboration with his emotional and narrative heavy-lifter, composer John Williams (and while the arrangement of Leonard Bernstein's preexisting score is credited to David Newman, Williams is still here as a "musical consultant").  But we do still have Ready Player One, Spielberg's film just prior to this, which itself leans heavily upon a romantic dance sequence set to a New Order song in CGI space.  It's a great scene.  Clearly, he was limbering back up.
My position, which I'll reiterate for at least the 39th time, is that Steven Spielberg is the greatest filmmaker there ever was—maybe ever will be—but even though his years of commercial dominance are objectively over and he arguably has his limits, he is also one of the most instinctively visual filmmakers to ever live, one of the medium's clearest storytellers, and a director who understands how to create emotionally-immediate film images like maybe five other people.  This is why his action scenes are so good.  It's why even his dialogue scenes are more action-packed than most people's action scenes.  Given that these are the exact skills required for a film musical, we always assumed that he would naturally be a good at making one.  As we (or, rather, some of us) discovered last year, that assumption was correct.  Doing a musical even gives him a crutch to lean on, as regards the decision to remake a romance, the latter genre being something that Spielberg has spent all fifty years of a fifty year career telling us he probably wouldn't be good at, though Always notwithstanding (Always is never withstanding), I've changed my mind on that: when he actually tries, he can be.  But then, Always is, well, also a remake of a mid-century romance, which Spielberg screwed up completely, so if anybody had actually remembered Always that would've been another perfectly good reason to be nervous.
We can, anyway, trivially explain the decision to do a musical, generally, but that brings us to the very specific decision to do West Side Story '21, remaking West Side Story '61, and of course one would be apprehensive: for this is the most Steven fucking Spielberg decision imaginable.  It's slightly arrogant, for starters.  I have no special reverence for Robert Wise's West Side Story, but it is an imposing Best Picture winner, and there are so many other mid-century musicals, and several other film musical styles, that Spielberg could have resurrected instead.  I doubt any ever occurred to him—he may love 30s and 40s froth as much as I do, but it's almost impossible to imagine, e.g., Willie Scott Comes Home ever crossed his mind.  It probably didn't even cross Kate Capshaw's mind.  No: Steven Spielberg had long since entrenched himself, both as a matter of reputation and within his own mind, as the director who occasionally still does pure popcorn, but whose real life's work is to serve as American cinema's great chronicler of history.  So of course he did West Side Story.  Of course he did the one canonical musical he could find about a Goddamn race war.

"Dance At the Gym" is particularly accomplished, and, I think rather obviously, the best dance sequence here, benefiting from the sudden introduction in Kaminski's photography of much more saturated colors than before (and mostly after)—and just to wedge this in somewhere, the color-coding in Paul Kazewell's costume design is such great stuff that it might be a bigger reason than literally anything else that I believe in Tony and Maria's love, and that's only the half of it, somehow managing to do an extremely schematic and overbearing color-coding plan that is in no way subtle and nevertheless making it read as subtle, and as completely plausible clothing that people in 1957 would be wearing.  (Of course, he's also joined in this effort by production designer Adam Stockhausen, who does my favorite thing in the whole movie: Maria's bed is blue, which in the context of a Spielberg movie's sexuality is such straight-up pornographic sleaze that you could pop a boner from it.)  But "Dance At the Gym": I see the word "classical" thrown around a lot for Spielberg's construction of these dance sequences.  I disagree, unless you're just using the word "classical" as a synonym for "good" or "colorful upskirt spins," which admittedly isn't the worst summation of mid-century dance films.  But it is not, like a classical film musical, very interested in the spectacle of athleticism from its participants, though it often finds such spectacle within it, and Spielberg can certainly appreciate it.  But it simply is not cut for the purpose of showing off the movement of human bodies as an end in itself.  It's something else: a terrific exercise in challenge dancing across an entire chorus—two choruses, even—splendidly but very spikily edited, getting across the idea that this is already a rumble-by-other-means.
Which circles us back, in the end, to Kushner and his script.  It does all it needs to do for the romantic tragedy that was foreordained all the way back when Shakespeare wrote it; and I want to be clear, this is the most important thing.  But damn is it a fascinating script: the emphasis on racial dynamics is, in a sense, almost a blind.  It's very often talked about in this script, but it's not, actually, didactic; because the racial dynamics are the framework the characters themselves use to get at what isn't discussed ad nauseam in this script, but which finds its way into it through every possible sideways opening.  I'm not sure when exactly it becomes clear.  Maybe it's when Bernardo says "we gotta do it—it's stupid, but we gotta do it."  Maybe it's when the girls at the dance complain that they're not fucking dancing (which is to say, they're complaining they're not fucking).  Maybe it was clear all the way back when the Jets and Sharks stand there in mirrored lines, glaring at a cop in the mutual understanding that he's outside their shared system of honor.
If it weren't race, they'd find some other sorting mechanism to wear red and blue and dance and get into gang fights and forge bonds so intense that Kushner, surely not by accident, is perfectly willing to push right up to the edge of homoeroticism, albeit with the keen understanding that it's about physical and emotional survival rather than sex, that the boys simply mean more to each other, and they have only each other as any possible anchor in their dissolving world—and while Tony has betrayed that by anchoring himself to a woman instead, he can't escape them, neither Bernardo nor Riff (nor Chino, a whole complex of motivations by the end, despite being like the eighth most important character, finally dispensing with any honor right around the same time the Jets do).  It's honestly one of the most intelligent scripts about masculinity out there, the appeal and awfulness of it alike, the way it shapes and even serves as the sturdy patriarchal foundation for racism (or "racialism" or "bigotry," if you'd rather be a fucking geek, though the point is, Bernarndo is as much a villain as Riff—but also as much a hero, if the latter only in a Homeric sense).  It culminates in every horror masculinity's capable of.  I mean, sure: that's true of the '61 film, too, and the stageplay (it's interesting to note that in early development, West Side Story was about two white gangs, and you can still perceive how much of an overlay the Puerto Rican aspect is); and it's sort of even true of Romeo & Juliet.  But this screenplay is so much more deliberately About Masculinity, As Inflected By Class and Race, even though I'm almost positive they somehow never even say the word "man."  Even the trans character (in a fairly canny change, that is kind of not really a change), Anybodys (iris menas), isn't excused—though he probably thinks he's been, despite having spent the entire film busting his ass to earn the respect of a white power gang.  He receives it just in time to not lift a finger to stop them from raping Anita (which in terms of Anybodys, is a damned edgy change), at least beyond a milquetoast warning that she was never going to interpret correctly anyway.  (Christ, the women themselves aren't excused: I don't know if it's a Kushner addition, but anyway, I don't recall the original film having a lyric in the "Tonight Quintet" about Anita getting wet over the thought of her boyfriend kicking ass.)  And I still don't know if any of this is the right and proper thing for a musical to do; I still believe it is not.  But it's one hell of a Steven Spielberg movie, anyway.
Score: 9/10
Posted by Hunter Allen at 1:06 AM