Kick me in the jimmy 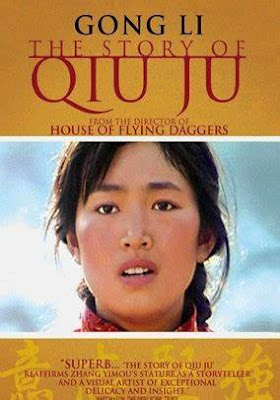 THE STORY OF QIU JU
1992
Directed by Zhang Yimou
Written by Liu Heng (based on the novella "The Wan Family's Lawsuit" by Chen Yuabin)
Spoilers: mild 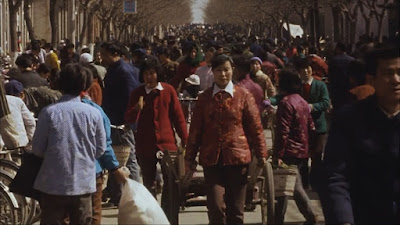 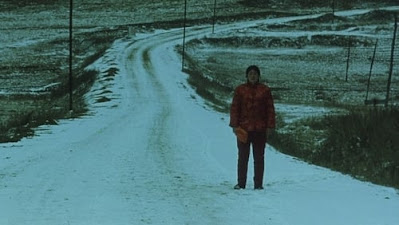 But then, the whole project was a bit of a re-education in the countryside: besides the extramarital affair, Zhang and Gong had gotten in fairly bad trouble, career-wise and politics-wise, for Raise the Red Lantern.  I will never comprehend why: politically, it mainly says, "China under the warlords sucked, good thing they're gone," and while it's about sex, it's not remotely sexy.  Whatever it was, it did lead to Zhang's disassociation with Taiwanese and Japanese companies (did I identify the problem?) in favor of Sil-Metropole, technically a Hong Kongese firm though in fact PRC-affiliated; and Zhang and Gong concocted Qiu Ju with Liu's assistance as a bit of voluntary penance that would, coincidentally, get them out of the public eye while they decamped to a Shaanxi village with a small crew and even smaller cast (besides Gong, the cast of professional actors number four or five, with the rest of the speaking parts and extra parts being filled by actual villagers who reportedly welcomed the small film production as a lark).  Hence Zhang's first neorealist picture was kind of make-work, which isn't the nicest thing to say about it, though Zhang understood workers and peasants in rural China better than anyone in his cohort, given the years the stifled artist spent actually being one.  It did its job, anyway: Qiu Ju was more pleasing to the party, despite seeming like it should be less so.
I find it modestly pleasing myself, with the caveat that it does still seem like a waste of Zhang's time.  It at least doesn't waste ours, which is nice: it's only 100 minutes long, just long enough to capture the frustrating repetitiveness of Qiu Ju's struggle, not quite long enough to frustrate us, and in the meantime it does wind up with a lot of neat footage of Shaanxi.  On five or six or seven rare occasions, this even means a cool shot where Zhang obviously couldn't help himself, using shadows on the ground, or streams of light inside old, quaint buildings; slightly less rarely, it means some splashes of Zhang color (Qiu Ju grows chiles, which we find in enormous red bunches).  More often, a lot of it is just interiors cluttered by stuff and by people, slightly claustrophobic but often homey, and scenes frequently introduced with completely non-germane conversations from the tertiary cast.  Maybe even more of it really is just documentary impressions of what this place was in 1992.
The objection is that "this place" is not inherently interesting, and if I lived in Shaanxi, I doubt I could give the first shit.  But, I don't, so I can.  (If nothing else, that this is a backwater town is downright harrowing to me, agoraphobia-wise; and Zhang's hidden camera photography's good.)  And anyway, eventually it does find its way into some actual narrative convolution, reorienting its general super-gentle satire into something more focused on the specific conflicts between these specific people, living in this specific milieu.  It's about how fucked up things can become even when people aren't deliberately trying to make it so.  It's not my kind of film, it's true, but Zhang has always been my kind of filmmaker.
Score: 6/10
Posted by Hunter Allen at 3:57 PM