Once upon a time in Hollywood 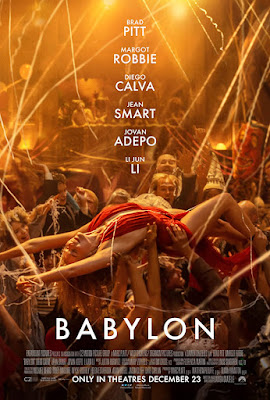 BABYLON
2022
Written and directed by Damien Chazelle
Spoilers: high, sorta—I'm not going to actually spoil the plot, such as it is, but there's just no point in writing about this without writing about the last ten minutes, and I guess you probably ought to see it as unsullied as possible, so I'll try to section it off

I pray I'm not making this up (I could be, but it serves the purposes of an opening paragraph even if I did), but there was an article I read once, arising from that genre of contrarian clickbait bullshit that produces profound thoughts like "the Galactic Empire was good, actually" and "Thanos was right."  You know—sub-Clerks fanwank trash, circulated around via ad servers for the eyeballs.  Anyway, this one wasn't as stupid as usual.  It might've been more serious, given I don't know what fans exist to have clicked on it; maybe it appeared in an actual publication.  It may well have been named "Lina Lamont Was the Hero of Singin' In the Rain."  I believe Damien Chazelle must have read that article too, because he made a movie called Babylon based on it.
If I did make this up, I'm sure Chazelle would cut me some slack on that (he might not approve of my insinuation that he gets his ideas from something as ugly and intellectually bankrupt as the Internet).  But "invention for a purpose" is Babylon's whole deal, and while there has been a strain of criticism of his film revolving around The Facts, I cannot imagine a more sterile and pointless way to engage with it, or a more idiotic one, as Lina Lamont is already a Goddamn fiction and so, it stands to reason, would her renamed stand-in and the universe surrounding her be.  Those characters who are somewhat less fictional, and more closely resemble specific historical figures or composites thereof (and whose real-life analogues are themselves accordingly carefully kept out of the movie's scope, even though they'd definitely be mentioned if they existed), almost invariably don't actually bear those figures' names, either—I mean, Irving Thalberg (Max Minghella) has about ten lines, but the real-life personage with the next most lines is probably Gene Kelly.  Whatever Babylon is, it is least of all a history, and only incidentally historical fiction—it's a remake of Singin' In the Rain, from the perspective of those it immortalized as ridiculous failures.
That's not all it is*, but this is the easiest way to summarize it; it's certainly how it wants you to summarize it, given it's hard to conceive of a movie being any more aggressively clear about the reason it exists, at which point I do feel an intense need to talk about THE ENDING, SO I'M "SPOILING" IT FOR THE NEXT PARAGRAPH, starting presently:

So that gets clarified in a final scene that is a confirmation of what was already obvious several hours earlier--it's an extraordinarily long film—but manages the extremely unusual feat of not only closing the narrative on its very strongest gesture, but also that its strongest gesture is the most "did you get it?" shove you've ever seen.  It works, I think, because it's didactic purely as a matter of incredibly well-chosen visuals that recontextualize what some would claim to be the most purely entertaining film ever made as a vicious, callous mockery of people who didn't deserve it, set against the expressive power of a human face, weeping while everyone else laughs, but eventually finding some register that isn't despair any longer but also isn't quite joy.  It's a fascinatingly ambiguous expression, that might be in between, or might not even be either, just awe at the iconic power of Kelly dancing on a grave and singing in the rain.  Maybe it's not a film's best move to refrain from teaching you how to watch it till it's over, but it's never been hard to grasp, and it is nice for a film to end on its best foot.  I will only say for now, in the interest of having some original contribution to the conversation about Babylon, that it's awful weird that it's a Paramount movie, considering that the vast majority of the intellectual property it has its head up the ass of is Warners'; gosh, just from a business point of view, do you realize that if the movie had come out like a week later it wouldn't have had to pay to use The Jazz Singer?
END SPOILERS
It's a curious thing to have to begin at the end, but Babylon is an awfully curious movie.  (And that's not exactly the end: the end, without spoiling it, is a very effective little breakdown that would not work at all had it not been anchored by the face that's beheld what it's beheld, and on an intellectual level I kind of hate it—it's a dumbfuck combination of 2001: A Space Odyssey and an advertisement for buying blu-rays—but damn me if it didn't flatten me within its context.**)
Well, anyway, that face that's so important belongs to Manuel "Manny" Torres (Diego Calva), and we'll be seeing a lot of it in Spielbergian "look at something slightly above and to the side of the camera" push-ins, for our Manny is already a prisoner of the images he sees in the dark even before he winds up helping make them.  When we meet him, however, he's gotten as close to the film industry as it looks like he might ever get, a sort of event planner for the rich and famous albeit not with any of the dignity that this might imply; about the first thing that happens to Manny is getting shit on by an elephant he's arranged to have delivered to a Silent Era bigshot's mansion that's positioned, most inconveniently, atop a damn mountain.  It's 1926, and things are going well for Hollywood, as the absurd bacchanal suggests.  At the party, Manny meets his Lina Lamont, Nellie LaRoy (Margot Robbie, and till I wrote them side-by-side I didn't realize how ridiculously close the names are), not an invited guest, but who's imposed herself through sheer whirlwind force of personality—Manny certainly feels it—and determined to become a star.  Correction: determined to be discovered as a star; as she explains, you either are a star or you're not.  And this party is indeed her break, netting her a fortuitous casting as a bar-girl in a film for "Kinoscope Pictures," because the original featured player overdosed while pissing all over Not Fatty Arbuckle (Troy Metcalf), and to her director's surprise, she is in fact a star.  It's Manny's break, too, for he's tasked with giving a ride home to the alternately depressed and manic actor Jack Conrad (Brad Pitt), and Jack, liking the cut of Manny's jib, brings him along to the set at Kinoscope the next day, where Manny's quick-thinking makes him a force behind the camera, and eventually lands him and Nellie both at MGM.
And, then, comes sound.

Babylon is both aimed directly at my soul and designed very slightly to annoy me, because I find the thesis "sound was a mistake" pretentious, and, in any event, a more apt love-letter to silent cinema would probably be to just make a fucking silent movie, preferably not about making silent movies but about literally anything else.  (None of the figures these characters were based on were leveled by sound alone, either.)  But narrative and allegory alike demand Chazelle make a maximalist argument in this regard—Babylon requires a maximalist argument in every regard—even if he is stuck here in 2022, making a hateful talkie.  So I concede the argument, because Babylon isn't about having a debate.  It's about feeling the collapse of an artform as it happens, alongside the artists inside it.  And it works splendidly for that.
If I just grimly marched through the plot, I suppose it wouldn't look like much besides a rise-and-fall tale interweaving the stories of these three characters whose fortunes turned for the worse as the 1920s became the 1930s, though it would look like a remarkably addled one.  It's actually a rise-and-fall tale of five characters, for starters, and perhaps it gets across how important they are if I didn't need to mention either Lady Fay Zhu (Li Jun Li) or jazzman Sidney Palmer (Jovan Adepo) in that summary.  The former at least manages to be organically integrated, on the basis of being both one of Jack's vanishingly few actual friends and later becoming Nellie's lover.  The latter represents not too much more than the director of Whiplash and La La Land's compulsion to put jazz music anywhere it could go, though he is also acknowledgement that Chazelle and his trusty composer Justin Hurwitz actually do realize that black people, and not Ryan Gosling, invented jazz.  There is a criticism of Babylon I'm honor-bound to respect, that it is messy, and its 189 minute runtime indicates a filmmaker going the full self-indulgence, unwilling to make any hard choices or even any easy choices about what to cut.  (Tobey Maguire, for instance, arrives in the only scene here that feels genuinely misbegotten, as some kind of demon of the Angeleno underworld, taking Manny on a tour of what might as well have been literally desribed in a title card as "hell," and this exceeds its plot function almost immediately despite trudging through eight minutes of horror afterward anyway, and while it's clearly some flavor of "symbolic," it's symbolic in a completely different register.)
And somehow within that vast mess of material there still isn't really three sets of narrative arcs, and I'm not sure there's really more than one: Calva is doing the film's most indispensable work, but it's hard to say "Manny Torres" is an actual character rather than an embodiment of a one-dimensional yearning to be a part of the magic of cinematic creation.  Nellie, meanwhile, is a cipher twice over: she's the embodiment of that for which the embodiment of yearning yearns.  That's me trying to be clever: more prosaically, she's an inscrutable lunatic, Manny's Borderline Personality Dream Girl, though at least Robbie is absolutely killer, a better Harley Quinn here than all those times she actually played Harley Quinn, because there's no IP to manicure now.  But Pitt gets the best of it, given the majority of the film's most rewarding material, if almost by default, because there's enough dimension to Jack that you can find a surface to attach to, a Not John Gilbert, whom legend tells us lost his career to sound, put on fast-forward, and by some margin the most keenly tragic of the three principals.  It's a character very well-tailored to Pitt's particular strengths, both as a movie star and in his "actual actor" mode: intelligent, but not nearly as intelligent as he thinks he is; aware enough to know he's incredibly self-obsessed but entirely unable to find a way out of it; and cheerfully embracing of the technology of sound, because he loves his art but can't tell the difference between art and novelty, and he shall only realize about two hours later than we did that it's this deeply-flawed intertwined love of art and fame that shall obliterate him.