The Rock and eternity 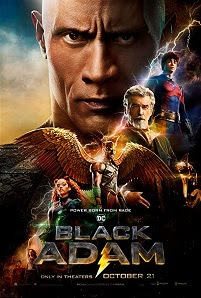 There are things about Black Adam, the last venture of the DCEU to not be tainted by a crushing awareness that the DCEU is effectively over, that I appreciate; and one of them is that it wants to be the cinematic equivalent of a superhero comic book in ways that superhero comic book movies don't typically manage.  In this case, what we have is a fight issue, the kind that in time out of mind might've been commemorated with its own trading card and have sold itself LOGO VS. LOGO-style on its cover, an essentially real-time dust-up between super-beings with a lot of splash pages, and which sometimes did indeed find themselves pulling the double-duty that Black Adam is itself obliged to pull, that is, telling an origin story at the same time.  Here that origin belongs to one Teth-Adam, going by the sobriquet "Black Adam" (but you gotta wait for that), and he is played by Dwayne Johnson, which is the other aspect of Black Adam I appreciate.  I'm afraid this isn't because I'm happy for Johnson that he finally got to bring his passion project to fruition after fifteen years of lobbying to play his favorite comic book character.  In fact, if that were the reason, I'd probably only be able to be sad for Johnson instead, because nobody liked the movie he finally got to make, on the fair account that the movie he finally got to make is lousy.
This was in no small part, it seems, because it was put off and retooled about a dozen different times, until director Jaume Collet-Serra—in the full-blown mercenary phase of a career that I suppose has never been anything else (even if it includes the splendid B-movie gem of The Shallows)—came aboard to supervise the welding of pre-viz action sequences onto a screenplay made out of kludged-together pieces of several other screenplays, ultimately forging what we'll generously call a functional motion picture.
I make it sound acutely terrible, but other than the length (and at 124 minutes, it's at least briefer than usual), the hack acumen behind it means it's something along the lines of a watchable flavor of bad, so thank goodness for small miracles, though it's filled with enough rankling problems that it's about the lowest it could hit before I stopped calling it "mediocre" and started calling it something worse.  Collet-Serra escapes relatively unscathed, but there's dishonor here, like some of the most braindead deployments of pop songs in recent film history, and I'm not sure which is stupider—dropping the Stones' "Paint It Black" on an action scene that nobody was even attempting to choreograph to the rhythms of the song, or spinning up the Smashing Pumpkins' 1995 hit "Bullet With Butterfly Wings" to serve as a sonic backdrop for this film's portrait of contemporary life in the ill-fated semi-Egyptian country of Kahndaq, as such a life is lived by our rebellious teen sidekick figure, Amon (Bodhi Sabongui).  Or maybe the Pumpkins are huge in Arab North Africa, I wouldn't know.
What's baffling about that screenplay, however, is the simplicity of its ends, and the diastrous overcomplexity of its means.  The plot is whisper-thin boilerplate: Amon's mom, archaeologist Adrianna Tomaz (Sarah Shahi), has embarked upon a quest to find the fabled Crown of Sabbac, an ancient Khandaqi artifact of great power, before the insidious forces of the international criminal syndicate Intergang can.  When she does find the crown in the tomb of Teth-Adam, buried here along with him five thousand years ago, she almost immediately finds herself under her adversaries' guns, with only her archaeological expertise and the irrational hope that magic words can save her.  However, for this is a Shazam! spin-off, that hope isn't so irrational.  Thus does she resurrect Adam, who obligingly dispatches her assailants with the godlike powers granted to him millennia ago by the wizards of the Rock of Eternity (mainly Djimon Honsou, in a contender for the most thankless cameo appearance in a superhero movie, so wow).  Unfortunately, this spills out into a big enough fight that it gains the notice of the world, who after Kryptonians and New Gods are naturally twitchy about superhumans like Adam, especially given that he's going around killing people for the sin of basically just poking him, even if they are poking him with bullets.  And so the Justice Society—principally Hawkman (Aldis Hodge) and Dr. Fate (Pierce Brosnan), plus new recruits Atom Smasher (Noah Sentineo) and Cyclone (Quintessa Swindell)—heads to Khandaq to investigate this potential global threat and neutralize it. 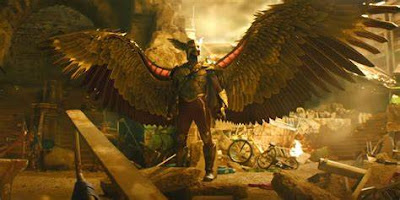 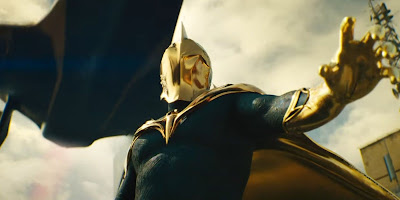 I'll venture that it looks okay: it's not interesting and the production design has very little to work with (it's all but a single location film in its main phase, and if I'm just blue-skying, I'd say that an entire superheroes-and-sandals movie that simply took place in ancient times would've been way more intriguing), but even if the metallic golden cast that the photography settles on early and maintains throughout is blatantly stereotypical, it gives it a nice DC dourness that's a little to the side of the usual DC dourness.  All along, there's a lot of grinding in and out of tones, and a lede I've regrettably buried is that despite the Snyderverse-style monochromatic gloss this is DC's most effortful attempt to "do a Marvel" since Joss Whedon's Justice League all the way back when, with Amon's entire function in the screenplay (besides being a moppet to save) boiling down to his service as a delivery device for inane comic relief.  He's not the only one, either, and basically everyone has to serve that function at some point.  Then there's the part where Amon-as-Bartman slides into the frame in slo-mo on his skateboard at the head of a mob, ready to do battle with zombies that exist solely to give Amon any independent activity, and this constitutes some third approach that I'm not sure I can classify, though it sure is fucking dumb.
To end on something nice, I'll circle back to what I said about Johnson being the other thing I appreciate here.  For starters, though it's frequently trying to be funny, I laughed out loud only one time during Black Adam,* and it was thanks to Johnson, who buttons a line I don't remember, in response to another line I don't remember, with a brilliant little sarcastic frown-smile; and of the entire ensemble (with some respect thrown Brosnan's way, which is ironic) I think he's the only one who has anything like a worked-out understanding of his character—sullen, prickly, and low-key reveling in his antiheroic bona fides—and he's instrumental in Black Adam being even as successful as it is, impervious to the trivializing Marvel-style impulses that keep seeping through the screenplay, indifferent to the invitations to join a discourse held by badly-coded bots on Foreign Policy Twitter, and even able to mostly bat away Sabongui's kid actor cloying.  He's underplaying, which we don't get to see much from Johnson these days, and it works: he's funny in acerbic ways that don't care whether you laugh or not, and this shores up his native charisma.  This is all in defiance of a screenplay which, I assume, Johnson could never have been excited about.  It's not enough to redeem the project, not close to it, but it's enough to keep it from being completely mindless—one of the vanishingly few pieces of evidence that showed anybody cared about Black Adam at all, and it's fitting, I guess, that the first person who cared was also the last.
Score: 5/10
*Okay, three times: I also laughed at Adam treating a mirror as sorcery, which in these circumstances is startling in its historically literacy, and I may have also laughed at "a refusal to use doors is a character trait," though I'm not sure I should.
Posted by Hunter Allen at 7:38 AM