The mountains and the sea 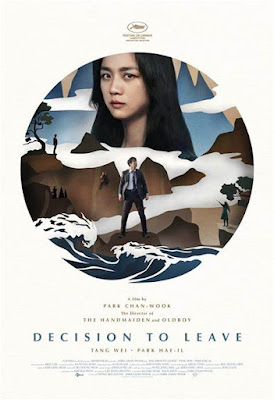 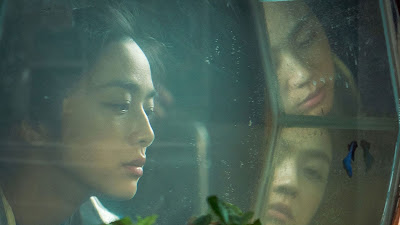 Oldboy was almost twenty years ago, and in between there and here I've become very much a Park Chan-wook skeptic. I've always been willing to give anything made by the maniac who made Oldboy a chance*, but this openness has not been especially well-rewarded.  The only thing I've actively disliked was Stoker, Park's ill-judged attempt to jump into English-language cinema (every Korean director who gets big enough tries it, it seems, and yet, with due respect to the Bong Joon-ho fans, by my lights the one who's come the closest to actually succeeding was Kim Jee-woon, whose unambitious Schwarzenegger vehicle The Last Stand at least hit its target).  But there's a whole lot of room between "active dislike" and "love," and as well-received as The Handmaiden was, "love" was not in the cards for me, and I'd given up hope I would ever love a Park film again.
As you've assuredly guessed by the way I've been talking, Park's very latest, Decision To Leave, has reminded me that there's always hope; it's absolutely terrific.  It's one of just three movies from 2022 I've already watched twice, and very much the kind of movie that compelled me to make the most out of a digital rental.  If part of the reason I watched it again is that it's maybe a little too obtuse in the details of its plotting (though never the broad strokes), I would say that's mostly in its favor, too—after all, if one likes a movie enough to desire to experience it again, so as not to be even slightly confused by it, that's presumably a good thing, though "not leaving you bewildered and a little bereaved" was, of course, never Park's goal here.
It finds Park operating in his typical genre ambit (broadly speaking, "a violent thriller"), but more-or-less in opposition to his usual mode: he's never made a movie as gonzo as Oldboy since Oldboy, and I assume probably won't again (making a movie as gonzo as Oldboy would be pretty challenging even if you wanted to), but even in comparison to his 2010s works, this is notably restrained stuff.  It feels downright classical in its content, as pure an old-time noir as possible updated for the present day—it's more down to smartphones than anything else about it that it could not have been made as early as the 1940s, with the minorest cuts—and despite the rambunctious formal experimentation it gets up to, it even feels classical in its style, albeit in reference to a different "classical period," with the surveilling cinematic language, chase montages, and Panavision-ratio architectural predlictions of 1970s paranoid thrillers serving as the sturdy basis for all of Park's more playful flourishes, of which there are a great many.
So: in Busan works sleep-deprived homicide detective Jang Hae-jun (Park Hae-il, hereafter Park H.), sometimes in combination with his more-temperamental and accordingly less-competent colleague Soo-wan (Go Kyung-po).  Hae-jun solves murders—or, frequently, does not solve murders—over the work week and reunites with his wife Jung-an (Lee Jung-hyun), a nuclear technician in distant Ipo, over the weekend, where they cling to a shell of a marriage that we can guess is hollow for reasons beyond mere separation.  It is not a hateful marriage, but Jung-an is just overbearing enough that we understand that tsking him about whether he's still smoking (he's actually not) and his health (she's a nuclear engineer who believes this qualifies her to insist on superficial Internet research-based remedies to her husband's ills) is the main way she relates to this marriage anymore.  It's always hard to tell, but it at least seems like she's a boring lay, too.  It occurs to me that this is a lot of specificity for a character who's in, like, five scenes; but Park and his ancient writing partner Jeong Seo-kyeong have managed a very carefully-written screenplay here.
This is the situation as it stands when Hae-jun gets the case of Song Seo-rae (Tang Wei), and which is not likely to survive her.  Seo-rae is the Chinese wife of a Korean bureaucrat found dead at the foot of an imposing rockface outside Busan; there is every indication that he fell, either by accident or as suicide—so much indication that this was misadventure, in fact, and so little indication that it was spousal murder besides his history of abusing Seo-rae, that one is mildly surprised that the Busan police have the funding to pursue Seo-rae as a suspect, though in fairness, this is also a concern that's textually-raised.  It's really down to her acting a little too strangely and unmoved when she learns of her husband's demise, and changing her mind and asking to see the pictures of his corpse as it lay at the foot of the mountain—though Hae-jun likes this about her, and later will admit that her clear-eyed willingness to see things as they are was one of the things that drew him to her.  This is, of course, ironic, much like his apparent addiction to Visine.
That gets us to about the one-quarter mark; there is no real reason to soldier through the entire complex and twisty plot except perhaps to state that, if you're paying very close attention, there is rather less of a murder mystery here for us than for Hae-jun, and it becomes both increasingly obvious that she's manipulating the detective and also increasingly obvious she's not doing so just to get away with a crime.  Suffice it to say that things are startlingly reoriented about an hour in—there's a tendency to write about this film in such a way that it sounds like during the slightly-more-than-second half of this 139 minute movie they become a crime-solving Scooby Gang together (though there is about twenty minutes in the middle where they do), so to avoid that let's say that another mystery develops and Seo-rae is at the heart of it again. 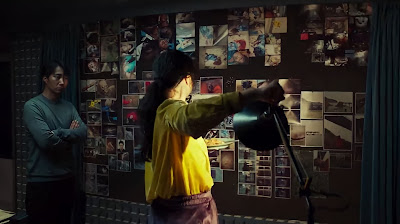