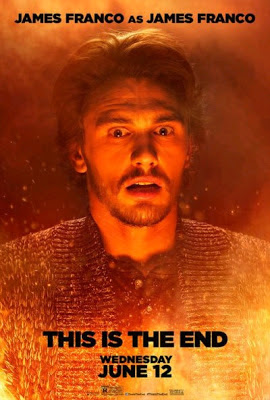 You may not be a fan of these guys.  Personally, I've always run hot and cold with this extended gang's prodigious body of work.  Sure, Superbad is great, but Knocked Up is a bit of overrated tripe.  And their catalogue goes on like that: hits and misses.  But even if you hated Seth Rogen and his boys, I'll go out on a limb and say you might still enjoy this movie just for all the bad, nasty, funny stuff that happens to them.  And given the absolute critical mass here, there's bound to be somebody you'll like somewhere (and something bad will inevitably occur to them, too). 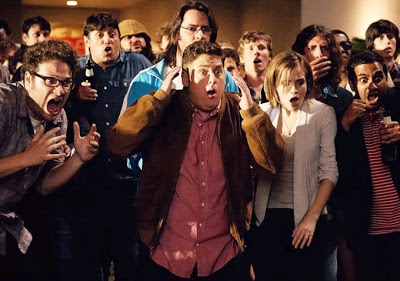 It's unlikely you'll guess what bad thing is happening to whom if you haven't been told.  I won't spoil it for you: it is, without irony, one of cinema's finest moments.  (And it was probably in the trailer, which is a shame.)

The plot is simple.  In this equal parts arrogantly auto-erotic and genuinely self-eviscerating cis-apocalyptic comedy, the eschaton falls upon humanity, and in James Franco's party bunker, no one notices for a few minutes.  When they do the movie stars we love and/or despise reveal their true natures as useless scum, or they die, or, most often, do both.

Seth Rogen and allies play themselves, or more accurately caricatures of themselves.  Jay Baruchel is a self-absorbed phony who thinks he isn't a phony.  Danny McBride is a grotesque id monster.  Jonah Hill is a sociopath who thinks he's the charming kind.  Rogen himself is a neurotic victim of childhood sexual assault.  James Franco in particular is an amazing cartoon, amplifying all of his obnoxious pretense and ferret-like guile, and divesting himself of any of the magnetism and all the intellect he brings to most roles and clearly possesses in real life.  Oh, and Craig Robinson probably never really gouged a man's eyes out. 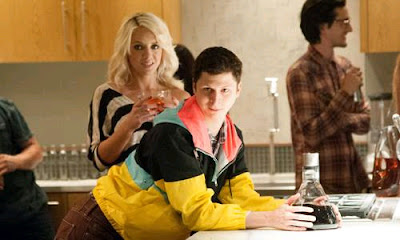 That is, the most dynamic man on this plane of existence.

This film's apocalypse is a Christian one.  As a result, Nick Cage and Kirk Cameron, Tim LaHaye and Jerry Jenkins, and everybody else involved in producing really specific Bible fan fiction to sell to the cultural outlands of America can hang it up.  This Is the End does the Rapture in a way that is likely to be far more amusing than any Christian-bookstore version, and the really funny thing?  This farce that deploys premillennial dispensationalist mythology as its setting is likely to better represent Judeo-Christian values than in any number of those pages.

Indeed, given how many different flavors of Protestant Christian eschatology there are, it's actually not that far-fetched that This Is the End fully satisfies at least one of the multifarious prophecy checklists that fuel Biblical apocalypse narratives, if purely by accident.  And even if they do keep saying "Book of Revelations [sic]."

There is a specific scene, deep into the movie, that I'd like to bring attention to.  It's after Rogen, et al have more-or-less pieced together the PMD nature of their particular end of the world, realizing what many in the audience already knew immediately, by virtue of being American.  This is not a bug, it's a feature—these Hollywood liberals are by design remarkably stupid and ignorant of the wider world beyond their own noses, and it strikes me that many Christians might find their ignorance less distressing than you'd hope.  I do suspect, however, a lot of Protty Christians would take severe issue with the solution This Is the End offers against the problem of being trapped in the end of days: that is, being a good person. 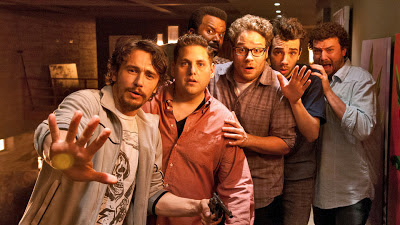 This is the distinction between works and faith, I take it.  In This Is the End, they don't have to say magic words or pledge allegiance to a totalitarian (neapolitan?) triune deity with the correct formula.  They must simply stop being such shits.

There is a bit with James Franco that I reckon will stick with me, not just because it is riotously funny, though more crucially it very much is (no one will be seated during the Danny McBride gimp scene).  I think I'll remember it also because in a strange way it really does do Left Behind better than Left Behind.

What happens is that James Franco sacrifices himself so that Seth Rogen and Jay Baruchel can escape a sticky situation, and, as a reward for his heroism, he is immediately raptured, thereby also rescued from a very grisly fate.  This occurs because the I Am of this story Is Not a total jerk as featured in so much PMD literature, or, honestly, large parts of the for-real Bible (or The Ten Commandments, for that matter).  Unfortunately, despite his selflessness, in the moment of his spiritual and bodily rescue, Franco commits the cardinal sin of being a poor winner and no sooner is he saved than he is gorily deleted.

I'm not a Christian myself, but being born and having lived thirty years in South Carolina, the majority of the people I encounter are (many being my relatives).  Large numbers of them, perhaps literally a majority of everyone I meet, are Protestant Evangelicals.  Not all of them embrace the perverse potential of the Rapture like James Franco does—but this same ugly brand of soteriology is internalized by many inwardly-Francoesque Christians, and it's pretty disgusting.

For so many Christians (and religious people in general, and, heck, us atheists too), being a poor winner is utterly central to their faith (or our lack of it, but at least in atheism we don't expect to be around to laugh at you on the other side).  "In Case of Rapture, This Car Will Have No Driver" Christians may not flip you the double bird when (not, in their minds, if) they get beamed up, but you can be sure they're extending their middle finger on the inside, because for someone like that, it's not going to Heaven that's the most important thing—it's that someone else goes to Hell.

This exclusivist, elitist make-pretend is pretty much the crux of the Left Behind series, where shits even worse than Rogen and pals fail to make the moral teleport coordinates to Heaven on the day of the Rapture, but instead of becoming better people as the Bible pretty clearly instructs, actively seek out ways to become worse, complete with every regressive, antisocial tic a leftist has come to expect from a fundamentalist Christian, not just in terms of how they relate to, say, LGBT folks, women, minorities, foreigners, atheists, Muslims, Catholics, moderate Protestants, Keynesian economics, the U.S. Constitution, etc., but in their smug self-satisfaction and profound self-absorption, made possible thru the power and love of the PMD interpretation of one Yehoshua ben Yusef, that is, a risen, and bloodthirsty, Messiach.

So it's pretty highly satisfying to see This Is the End, a story where this kind of hubris, this infinite schadenfreude, is punished—whether it's expressed directly like some kind of James Franco, or expressed more subtly, but in every action, even in witnessing itself.  It seems that this is hardly the case in other PMD fiction.

If I'm not a Christian, if I seem to loathe PMD theology and literature, and if I am unable to namecheck more than Left Behind (I can also namecheck The Late Great Planet Earth), you're probably asking, "Where are you getting your information about the Rapture in fiction from, anyway?"  Well, it's a biased source, but one I find trustworthy.  It's actually highly likely you're already a reader of Fred Clark's super-great progressive Evangelical blog Slacktivist, especially if you're not baffled by the term "premillennial dispensationalism" or its initialism, yet you are on the Internet reading a leftist atheist's movie blog about a rock-hard R-rated comedy.  But if you're not one of his readers, you should be.

As an actual Christian, he talks about these issues with far more insight and (let's face it) research and accuracy than I can.  Also, as an actual Christian, the fact of some of his co-religionsts', well, evilosity, is a pretty personal matter for him.  As a result, Clark has put a lot of effort, and a great deal of intelligence and humor, into a detailed, highly critical exegesis of the most famous of all PMD WTFs.  His Left Behind posts are rightly legendary.  The saga is still ongoing: he's into the third book (of ten, I believe) now, and may actually finish his task before he's called himself.  Fred Clark is second only to my stepmother in teaching me that there are genuinely good and decent Christians in the U.S. and that I spent a large part of my life being a bit of a shit myself.  God bless you, Fred. WARNING: you may wind up getting the bends from the archive binge, reading as many in a go as you can.  That is, at least, how it happened to me, but I'm a better person for it.

So, at this juncture I'll acknowledge that this is probably a very weird review, but I figured anything that needed to be said about the craft and wit that went into This Is the End has already been so—though it could be possible that no one has yet noticed the script's skillful use of Chekhov's ejaculate.

With this in mind, I thought a different angle might be more worthwhile.  But suffice it to expand only slightly upon what I said first: it's a unique, fantastic movie, and more importantly than any moral injunction it sneaks in, it is endlessly funny with not a single missed joke that I can recall.  There are three standout comedic set-pieces in particular that rank amongst the funniest scenes of any movie you care to list: namely, Michael Cera's final embarrassment; Emma Watson's response to the prospect of gangrape; and finally and most hilariously James Franco and Danny McBride's previously alluded-to argument over the proper disposal of the latter's semen, which is intentionally funny and creepy, and which is, again, more than you can say about any of the hundreds of conversations in Left Behind over basically the same thing between "Buck" Williams and "Captain" Rayford Steele.

That said, despite the glorious success of all involved, I think they might have missed one enormous opportunity: are you sure Michael Cera wasn't the Second Coming?