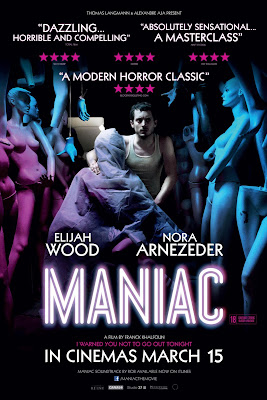 
Maniac has gained some measure of infamy, and is not unlikely to inspire imitators, for its central conceit.  You probably already know that the movie is, almost entirely, shot from the point of view of the titular maniac.  (And as to why maybe sixty seconds of it isn't, we'll only know unless and until a director's or screenwriters' commentary is available on disc.)

Whether one perceives the shooting technique of this remake of the 1980 slasher to be either a gimmick or its artistic raison d'être, a thrill or an annoyance, aesthetically enjoyable or even physically bearable, is going to vary from person to person, and may not be predictable.  I've alluded previously to my checkered past with found footage movies, and Maniac is indeed a found footage movie in all but name.  That said, like similar subgenre exception Europa Report but even moreso, I found it remarkably and happily smooth, to the extent I think steadicams, tripods, and maybe even tracks could have been used in many scenes.  Further, Maniac is presented in 2:35:1 aspect ratio, providing a panoramic view not too different from human vision (I assume going the full Ben-Hur was out of the question); this is a touch I like and which shows some real consideration on the part of Franck Khalfoun.  Editing is fortunately conventional.

I remained unafflicted during Maniac's running time, but your brain's response to what it believes is a toxicity-induced hallucination will no doubt vary.  Brad Jones, the horror aficionado himself, said that he doesn't usually mind found footage, but Maniac gave him a headache.  And that it was needlessly pretentious.  It truly takes diff'rent strokes to move the world.

Is it pretentious?  I certainly assumed it would be.  One may naturally surmise that this technique is meant to mean something.

Well, what it means, in practice, is that in almost every scene, we see what Frank, our loveable (?) schizophrene, can see.  Elijah Wood thus rarely has a true acting presence, since his physical performance exists almost solely behind his and our eyes.  I'm actually very interested to learn more about Maniac's filming—besides the technical aspects, I'm very curious as to how Wood approached his craft here.  Occasionally, of course, we do see Frank in mirrors.  Frank could stand some sun.  And, let's be honest, a shave.

Wood is largely, then, a voice actor in Maniac.  And he gets almost as many lines as Burnie Burns gave him in the last season of Red vs. Blue.  Wood is better than competent, if not quite great.  I wonder if Maniac were shot in script order: it takes his Frank a few scenes to find and straddle that line between flat, affectless, back-away-quickly sociopathy and a vocal performance that is, as he presents himself, "truly timid."  But, even though Wood is good, going by his words alone, the method by which he manages to charm not one but two extremely lovely women, one of them amazingly rapidly, is to say the least ambiguous.

Must be those baby blues.

But while Elijah Wood is certainly inhabiting (somewhat literally) his role as Frank, Frank is, especially when we see glimpses of him, not channeling much of what we know as Elijah Wood.  The result is that his apparent charisma definitely hangs more upon convenience than character.

Yet I'm not sure this is a flaw.  A more believably seductive killer would have been more disturbing, and Elijah Wood is certainly capable of doing that.  It's, seemingly, deliberately avoided, in a manner that sidesteps merely bad scripting.  That's the rub: there's an element of clownishness to Maniac that I am certain was intended, and which strengthens it as entertainment, but it did result in a film different from what I was expecting going in, one not at all likely to be taken seriously.

True: there are early scenes where the POV conceit is palpably discomfiting.  The average dude (okay, I) may not have murderous intent or follow women down the street, but isn't the camera mimicking Frank's leers at attractive women, well, maybe a little disturbingly familiar?  Just a bit?

It would be a genteel but perfidious lie, not to mention an obvious and stupid one, to suggest that men don't look at women—or, more rightly, people don't look at other people—through a highly aestheticized, sexual lens.  Personally, I do believe that this is, not to say unavoidable, but objectively harmless... so long as it is confined to looking (preferably discreetly), arises from healthy (consent-based) sexual curiosity, and leads only to fantasy or socially apropos (inter)action.  That said, I do get that it can reasonably make women especially uncomfortable, not only because staring is rude regardless of gender, but also because, well, who knows what evil lurks in the hearts of men?  Only Alec Baldwin.  And you don't want to know what lurks in the heart of Alec Baldwin. 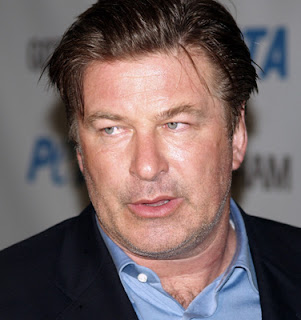 
I suppose it's natural, then, to notice how attractive many of Frank's soon-to-be-victims were—when we get to Megan Duffy's character, I'm even going to point it out (again).  Slasher movies, almost invariably, sexualize female victims, and arguably Maniac could be a comment on that—but not to any life-changing degree.

Still, even as a gorehound, at least one with a modicum of thoughtfulness, it could take a few minutes before you can comfortably enjoy Maniac.  The first kill of the film is conventionally written but unconventionally shot: as Frank, we stalk a woman, from the seat of our VW Predator van, back to her home.  This is where being Kevin O'Rourke really pays off in terms of treading softly, and, striking from the darkness, Frank jams a Dundee-sized knife through his victim's soft and hard palettes into her cerebellum.  It is actually one of the very few effects that doesn't work extremely well—the knife blow does not exactly look fatal, and it has that unwanted CGI shimmer.  Despite this, I suspected, briefly, that Maniac was going to be a queasy sit.  But, a few scenes excepted and taking personal temperament into account, that's not exactly the case.

The second kill is what really tells you what Maniac is up to.  Frank, through a profoundly unrealistic online dating service, sets up drinks and dinner with beautiful bohemian Lucie.  Despite Frank being, all things considered, a pretty lousy date, in a turn that would be out of place in a James Bond movie, Lucie still invites him to her house.

In the midst of undressing for the festivities, Lucie puts on a little light mood music.  It's an old number you might have heard of.  "Sexual Healing"?  That would actually be grim foreshadowing.  It is rather that sultriest of sex standards: Q Lazzarrus, "Goodbye Horses." 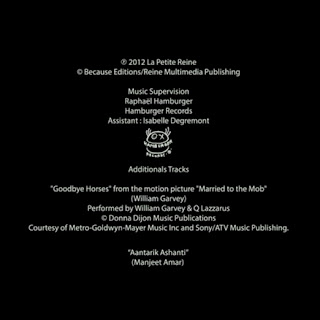 From the motion picture "Married to the Mob."  Sure.  Fine.

At this point, when Khalfoun is lifting (and refining) a joke from Clerks 2, it was clear enough what he was going for with Maniac.  There had been the possibility, even an apprehension on my part, that Maniac would be a successor to The Woman.  That too had its silly elements—it's a loosely-tied sequel to a movie about a band of cannibals in New England—but it took those elements and forged an unforgettable slasher of a truly different color, a film consciously about gender, a horror movie with genuinely gut-wrenching gore scenes that didn't wink at the camera, and a totally rewarding if wholly unpleasant experience.  Is Maniac comparable?

In a word: nah.  This musical gag is the first sign of the dark silliness that permeates the film, and is far from the last.  Perceived as a satire, or even as a farce, rather than any sort of dry deconstruction of participatory violence, Maniac is indeed at turns a very funny movie, and I can't imagine it's not on purpose.

I guess what I'm saying is, it has a real knife-in-cheek tone.

And I must here commend Rob (just Rob), who scored the film.  I reckon Q Lazzarrus' appearance was the work of Khalfoun and the screenwriters, but the score itself is a Carpenterian masterpiece, and the love song playing over the credits by Rob with Chloe Alper (their gorgeous "Juno") is, I expect, their own joke.  I want this guy to work on every horror film.  Every film.  Every TV show.  I want him to play my birthday.  It's the best score work I've heard all year, probably all decade, and I can't believe I can say this so soon after M83 and Joseph Trapanese's Oblivion.

I love movies with this kind of self-assured comic-violent tone.  The great thing about Coen Bros. movies is how often they attain this kind of pitch perfection, and against all odds Michael Bay's Pain & Gain more than succeeded here as well.  Even if it has less to say, so does Maniac.

And sometimes it plays straight with us: unlike those films, Maniac can and likely will still get to you from time to time in classic horror fashion, like with the stalkercam, or with a real bit of flinch-inducing violence or, in a highly effective moment, in this movie from the killer's POV, a jump scare.

And to its credit, when Frank becomes embroiled in the Los Angeles art scene (haha! yes), Maniac does not exactly deploy its psycho killer as the antihero, punishing those who have transgressed whatever arbitrary social rules du jour the filmmaker decided to put in play, in this instance the rule against being pretentiously twatty.  Here, that would not only have been stale, but offensive.  When a couple of arty jerkoffs do die for their sins in Maniac, it's gruesome enough that the idea is communicated that even egregious snobbery does not justify such nasty, or nastily poetic, fates.

It's also grounded enough that the movie's central relationship, Frank's infatuation with naive photog Anna, plays out as something like a real story, as I understand a similar plot did in the original 1980 Maniac (which much to my chagrin, I have not yet seen), but recalling for me the better parts of Red Dragon (the book and the film).  I liked it; even if in our reality Anna would have run directly away from Frank within, oh, about sixty seconds.

This is Anna.  She has never watched a slasher film, or maybe any film, never read a book by Thomas Harris, or maybe any book, and, if the movie didn't contradict it, I'd say she has never met a human, and so has no preconceived notions about us.

Ultimately, it's an occasionally affecting journey into cartoon psychopathy, presented in a unique, captivating style.  It chooses its path, treading it quickly and with skill, and that's respectable.  It may be a trifle, but I wouldn't dare append the qualifier "mere" to Maniac's exercise.

So: despite some pretty novel and highly competent filmmaking, Maniac adroitly eludes greatness.  And I'm actually a little relieved.

P.S. and update: Good on you, writer Alexandre Aja, for redeeming yourself for your terribly written, terribly directed High Tension.  I forgive you.  I also hope that I can be forgiven for getting Khalfoun and Aja confused and accusing the former of masterminding that particular crime against humanity.  Oops!

Maniac is, I imagine, still playing in some theaters in markets that are not mine.  For those of us in the rest of the country, it is available currently as a VOD.  I got mine thru Amazon.  $6 this time.  So matinee price.  This is pleasing and I recommend it.