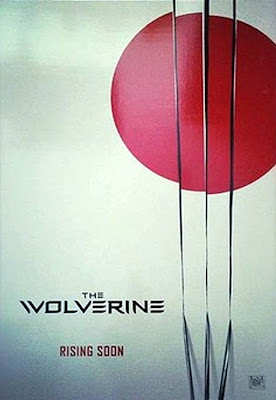 
The Wolverine just about lost me less than two minutes in.  The first shot of the movie is of a pair of B-29s flying into the frame; pretty specific ones, too. Bockscar and The Great Artiste appear at 30,000 7,000 feet.  The Japanese authorities ignore the aircraft, believing them to be reconaissance planes raise the alarm.  One of the Japanese officers in charge of Camp Fukuoka #14B Nagasaki a POW camp flees and abandons releases his captives, including Joe Kieyoomia a man in a cell buried beneath the ground.  A plutonium implosion device is dropped.  It flashes at 1500 800 feet on the east other side of the Urakami-Gawa stream Nagasaki Harbor.  The officer stares dumbly at the unobscured fireball a mile away and goes flashblind.  The man from the cell grabs the officer, jumping back into the hole with him as a shockwave passes in time with the noise and a cloud of ash descends bunch of CGI flames comes racing over the water.  At least 39,000 people die; Logan, the man in the cell, and the officer are not amongst them.

People went gorilla-whale-shit over the silly yet obviously highly fictional thermonuke test that opened up Indiana Jones and the Kingdom of the Crystal Skull.  I wonder if The Wolverine will get the same treatment?  Probably not, because it nonetheless conforms basically to what people think nuclear fission weapons do, even if it's a little exploitative of what is, right or wrong, one the worst single events in history.

And that's fine.  It's worth mentioning, but you can't be a crybaby about this stuff.  The movie got me back pretty quickly.  Despite some... nerd unpleasantness.  See the postscript.

But one does wonder why they didn't use a regular, nighttime, low-level firebombing of another city?  Those are easier to fudge the details of.  You'll have to pardon the pun, but they're a little less inflammatory.  Frankly, from a visual perspective, they are actually far more spectacular—and far less overdone in the movies, which've had two dozen nukes go off a year for the past sixty-eight years, and no mass incendiary bombing that I can recall ever being put to film at all, unless you want to count actual war footage, such as used in the terrifically offensive Invasion of the Neptune Men, or fictionalized versions that are nonetheless presented in the format of really unfun dramas, such as in Grave of the Fireflies.

Gee I wonder what will be left standing after the atom bomb goes off probably nothing it's so powerful—good grief, you think in sixty years Japan will make a movie where American 11 flies into the Empire State Building? 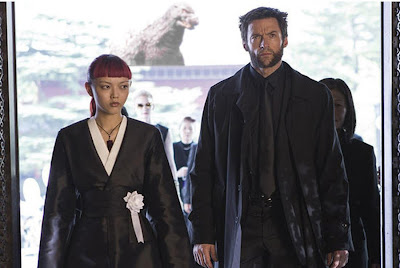 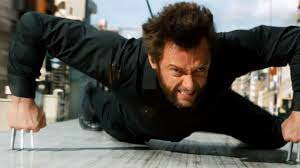 No cheerfully inappropriate J-Pop either.  Instead, enjoy an original score by John Cage.  No, it doesn't matter that he's dead.

Just add Logan himself and a white mutant villain with minimal presence and whose powers kind of goof up the joint, and, hey, you're done!

At the same time, cringeworthy though the exploitation of Nagasaki may or may not be, and mockable though its Google image search storytelling totally is—all this orientalism for its own sake is actually a lot of fun.

But two factors, one outside of the filmmakers' control, one wholly within it, mar The Wolverine experience.  They crush so much life out of it, with so little reason.

The first was pretty unavoidable.  You know that Logan is dragged by Yukio (a female martial artist with pink hair and bangs and a penchant for wearing short skirts and thigh-high leggings, of course) back to Japan to say goodbye to Yashida, the now-rich and cancer-ridden old man he once saved in 1945.  Pretty much immediately, he becomes heavily embroiled in what appear to be, and in fact are, two completely different and unrelated criminal plots, one revolving around the assassination of the heir to Yashida's corporate empire and total love interest (kimono-wearing, funeral-having, abused) Mariko, and the other involving Yashida's European (mutant villain) oncologist's desire to steal Logan's famous healing factor, probably not so she can save children with leukemia.

The result is Wolverine killing lots and lots and lots and lots of people, but due to the PG-13 rating, no matter how shirtlessly, it's also pretty close to bloodlessly.  Just as it did with The Wolverine's spiritual predecessor Dredd, content befitting an R rating would, all by itself, bring this film within spitting distance of greatness.

The hero of this movie is a man whose principal weapon is, basically, six knives.  I want you to think about that, executives.  Six knives.

But even with all the blood in Kill Bill Vol. 1, The Wolverine would still miss the mark like Bockscar missed the shipyards (that is, by almost two miles, if still rather impressively), because the second, bigger, insuperable flaw, endemic to the character, is still here thirteen years after Logan first appeared on screen back in '00.  That flaw, of course, is the Singer/Ratner/whoever misconception of Wolverine's healing factor: that is, total invincibility, occasioned by a little kid-friendly CGI gore.

The healing factor's been subject to power creep since it was introduced back in the '70s.  However, even as late as the early '90s, I was able to read a What If..? comic that posited its point of departure from regular continuity as a fight between Wolverine and the Hulk where the Hulk pummeled Logan's head until an adamantium disc slipped through his spinal cord and he didn't spend a couple months as a quadriplegic, he straight-up died.  The movie version, and the latterday comics version, of Wolverine?  Disembowel him.  Burn his flesh off.  Stick a katana through his chest.  I'm surprised no one's cut his dick off in one of these movies.  Who cares?  It's Wolverine.

Back in the '80s, Logan routinely took realistic battle damage: he could be hurt, he could be killed, he could be stopped.  It was his indomitable will and ability to shrug off pain that mattered.  To me, and I doubt I'm alone, that's the very appeal of the character.

In the old days, Logan's healing factor, along with his metal skeleton, was just a writer's trick to amp up the monthly violence while keeping him running when he was on empty, and to explain how he got fixed up in between issues after he got his shit kicked in by the Reavers or a Brood egg tried to hatch inside his chest.  During the Dark Phoenix Saga, given such short shrift in X-Men: The Last Stand, Wolverine was dropped through every floor of a NYC high rise (mass manipulation powers, roll with it) and into a sewer.  When he got up after that, it was legitimately amazing. 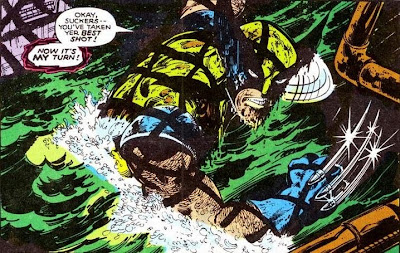 To achieve the same effect, a comic printed in 2013 would probably need to involve Logan being dropped into the sun.

The really sad part is that The Wolverine almost, almost recaptured this magic.  Logan is poisoned early on in this movie—somehow, roll with it—and his previously thermodynamically-implausible and drama-destroying mutant powers, for a spell function only well enough to keep him barely alive.  The film becomes necessarily smaller for this, and it's a welcome and wonderful distraction from the cosmic upset of a Man of Steel or Avengers.  It's great just to see a street-level superhero in a context not unlike the badass cinema he both prefigured and reflected: running and hiding and killing and maybe even dying, all to save the life of one person he cares about.  (And need it be said that Hugh Jackman is the Wolverine?  If I added that he's never been so more than now?  It does likely stand to be said that the two Japanese female leads, Tao Okamoto and Rila Fukushima, are great as well.)

But then must, inevitably, come the third-act dysfunction that characterizes a baffling number of superhero movies, regardless of studio and even regardless of original source company, from Batman Begins to Captain America to The Avengers to The Dark Knight Rises.  Here, not content just to get lame with one thing, many lame things happen all at once (and in fairness, some cool things too).

Good or bad, only about half of them make sense even in retrospect, least of all the lamentable decision to return Logan to full power, occasioning the need to give him an appropriately upscaled and superhuman foe to fight, whose menace could not be nearly as cool as that of nothing more complicated than a duel to the death against a well-trained man with an ordinary sword.  Except they kinda botched that scene, already, and more than a little, not least because it happens immediately after Logan's healing factor returns, making him effectively invulnerable, nor because they forget he has a fully adamantium skeleton and the sternum is, you know, a bone, but because the movie knows it isn't the real climax so dispenses with all its inherent drama as quickly as possible.  Oh well.  Giant robots! 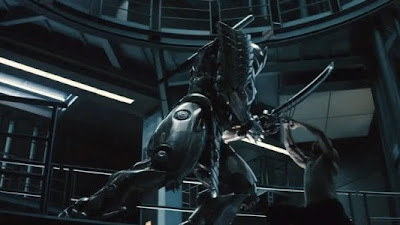 Okay, who fed the Silver Samurai the Pym Particles?

But, for the hour and a half preceding its descent into confusing mediocrity, The Wolverine is a thrilling romp through Movie Japan, giving me something I didn't expect: a character I adored as a kid going back to his early comic roots and reminding me why I cared in the first place.  For that hour and a half, it is the best it could be at what it does.

P.S.: Is it just me, or is Logan's hallucinatory memory of Jean Grey a real Debbie Downer?
P.P.S.: I should probably just give them extra credit for having both bombers at Nagasaki.
P.P.P.S. I didn't get started, and don't get me started: those bone claws.  Fuck, I always hated that.  Thanks a lot, writers of 1993 X-crossover Fatal Attractions.  I guess we can just be happy no one calls Wolverine "James."  Or "Weapon Ten"—you know, they really haven't done very well by Wolverine these past twenty years.
Posted by Hunter Allen at 5:46 PM