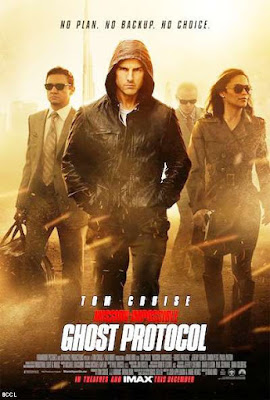 For the fourth time, Mission: Impossible became something else—for one thing, even more annoying to punctuate.  But besides that, by 2011 Tom Cruise had once again found himself looking for his franchise's new direction.  While J.J. Abrams had stayed on as a producer, he was too busy to helm a second Impossible picture for Cruise.  So Cruise cast his eyes to the horizon.

And, far afield from action blockbusting, he found his man: Brad Bird, one of American animation's leading lights, the auteur behind Iron Giant at Warner and—more recently—the two best Pixar films not about possessed toys, the superhero-themed Incredibles and droppings-themed Ratatouille.  But Bird wouldn't make his greatest cartoon until he finally joined forces with real life's greatest cartoon character—and what a team they made.

Mission: Impossible—Ghost Protcol is said by many to be where the franchise at last found its voice.  Of course, we know better: the Impossible series started with perfection, and technically its trendline has been slanting downward ever since.  But let's not blind ourselves with visions of De Palmian intrigue—not when Bird's own masterpiece stands before us. 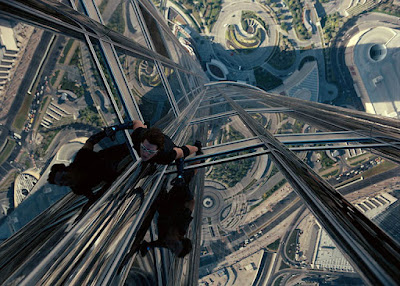 For the first time in his feature film career, Bird didn't write his own script, delegating that burden to a pair of Abrams' associates, Josh Applebaum and Andre Nemec.  Of course, the screenplay doesn't matter that much, the fourth Impossible picture being—as usual, and perhaps moreso—yet another tale of that time Ethan Hunt performed the several impossible tasks laid out for him by Cruise and his director.  The script's sole job is to link those exploits into a drumtight narrative package, and—unlike Abrams, Orci, and Kurtzman last time—Applebaum and Nemec succeed simply by not screwing up and dwelling upon difficult themes that the film wasn't interested in digesting.

But maybe that's not giving them enough credit.  For Ghost Protocol is also the first time that the Impossible franchise, always allegedly starring Ethan and his Impossible Mission Force colleagues, actually offers a story about teamwork where Ethan is not permanently the center of attention.  Likewise, it's the first time (since the original, anyway) where anyone other than Ethan emerges as more than a single line on a character sheet—sure, after Ghost Protocol, they may still only be worth a paragraph, but do remember what you're watching here.

Bearing in mind that until the final moments of this very film, you probably couldn't fill half a page with Ethan's own inner life, either.

In fact, we begin with complete strangers (not counting Simon Pegg's return, in his vastly expanded role as delightful hacker and pseudo-weenie, Benji Dunn).  IMF agent Jane Carter is running an operation to intercept a very important package—we soon learn it contains nothing less than Russian nuclear launch codes.  Her team fails, one dying at the hands of world-famous contract killer Sabine Moreau.  Jane swears revenge, and the IMF sends her to find the man who can help her get it: Ethan Hunt, presently in a Russian prison for the cold-blooded murder of several Serbian nationals.  Perhaps you'll notice that Ethan's wife, Julia, has not been mentioned so far.

Jane and Benji break him out.  From there it's on to the Kremlin.  Ethan and Benji take on disguises (but not masks, making Benji and me sad).  They infiltrate the Russian archives, where Ethan hopes they can discover the true identity of "Cobalt," the nuclear extremist he's been tracking—and the mastermind behind the theft of Russian launch codes, therefore the man who can lead Jane to Moreau.  The heist is beautifully orchestrated, but things begin to go wrong when Ethan realizes Cobalt has already emptied the archives—and, in fact, has gotten there ahead of them, setting off a bomb that pulverizes the Russian landmark, not just covering up his own theft of a Russian mobile launch device, but pinning the blame on the IMF.  With Russia and America now pushed to the brink of war, the President initiates "ghost protocol," disavowing the entire IMF.  At this juncture, we realize that out of four damned films, only one involves Ethan Hunt actually getting his paycheck.

Guess what happens in the fifth one.  Go on.

The Secretary barely has time to tell Ethan the news before overzealous FSB goons murder him; and that's how the Secretary's top analyst, one William Brandt, falls in with Ethan, although once he realizes the stakes, he's not about leave this mission unaccomplished.  Bereft of their customary support, Ethan, Jane, Benji, and Brandt hatch a new scheme: intercept Moreau in Dubai, give fake codes to Cobalt's operatives, and track them all the way back to the big boss himself.  Except for the part where they actually keep Cobalt from acquiring the real codes, their plan goes perfectly.  But things aren't over till the nukes are in the air—hell, the IMF won't give up even then.  They chase their quarry to Mumbai, battling to take control over a Cold War stategic communications satellite, purchased by an Indian telecom billionaire as just another part of his network.  (You'd figure they could probably just ask the guy for it, but this isn't that kind of movie.)  In the end, it's up to Ethan to hit a button that will save the world.  Ghost Protocol is really just so wonderfully old-fashioned, when you think about it.

That's no surprise, coming from Bird, who—despite being only 57—is one of the crankiest, most unaccountably nostalgic old men making movies today.  (As a fellow aficionado of Hollywood's Golden Age, Bird and I have much more in common than this venom would seem to indicate, but Tomorrowland leaves exactly that kind of bad taste in your mouth—the kind that makes you want to spit.)

Where others see a culmination, though, I see just another chapter in the director's expo of the franchise.  De Palma made one of the ultimate wrong man thrillers, toying with our perceptions; Woo made a movie so soaked in Woovian style that it's laughable, which may well have been the point; and Abrams made a grim-and-gritty piece of adolescent action pablum that looked great and possessed the pretense of substance without ever actually being about anything at all.

And now Bird, Pixar director, devises a series of complicated Rube Goldbergian setpieces that are far better experienced directly than they are discussed—but, we'll discuss them anyway.  Ghost Protocol's characters become the moving parts in Bird's elaborate machines, each sequence so dependent upon a central ingenious conceit that Bird might've missed a calling in video games, although not once does it feel like something you'd rather be playing than watching.  The joy of Ghost Protocol is seeing how each machine works—or, perhaps even more often, doesn't work.  Ghost Protocol is, in fact, Bird's single most cartoonish film in this regard—more attuned to color, light, montage, and to the interesting patterns its objects in motion make.  It is amongst the most triumphant examples of cinematic imagination of this century, conceiving peculiar spatial relationships that would amaze in animation—and blow the mind in live action.  And somehow, Bird's more interested in his characters' fictional physicality here than he ever was in his cartoons: without ever abandoning its rock-solid tone, Ghost Protocol can turn from nail-biting to slapstick-hilarious in the space of a moment.

The Burj Khalifa centerpiece, and its terrifically impressive Cruise-driven stuntwork, has been praised to death; and it's not even my second favorite.  The best mechanism for thrills and spills Ghost Protocol offers, of course, is the Kremlin break-in, so terrifyingly close to the perfection of the first Mission: Impossible's NOC list heist that sometimes I wonder if it's actually better—it's certainly more inspired.  Utilizing a mobile hi-def screen and eye-tracking motion detector, the abortive Kremlin heist is not just one of film's truly singular moments, but a psychotically taut piece of suspense too—and Benji's finest moment of comic relief, on top of that.

Meanwhile, the Burj Khalifa sequence, as frankly awesome as it is, can also be seen in an embryonic form in Die Hard, amongst others.  Anyway, the really great part of the Khalifa sequence is how seamlessly the action bleeds into the IMF team's high-stakes game of insane misdirection.  And the final setpiece, the "car vending machine," which no one seems to like that much, stands out in my mind—perhaps due to my native contrarianism.  But over time I came to realize it's because the key criticism leveled against Ghost Protocol doesn't really hold at all.

Ghost Protocol, you know, is said to lack a strong villain: and Cobalt, or Hendricks, is not the series' best—that's still Jim Phelps—but he's extraordinary nonetheless, essentially a manifestation of the chaos that keeps afflicting our heroes' best-laid plans.  You get Cobalt, and Michael Nyqvist deserves every bit the praise that Philip Seymour Hoffman received for creating another Impossible overfiend out of nothing but a single note.  Indeed, on that count, Cobalt's one note is rather more pleasing to the ear: Hoffman's Davian might have been the devil's accountant, but Cobalt is the heir to Karl Stromberg and Hugo Drax, two of James Bond's greatest foes.  As a point of fact, no one even bothered to file the serial numbers off—no one, that is, except Nyqvist, who sells his fanaticism with a genuinely ecstatic air.  Not bad for a man with about eight lines: he simply puts so much character into Cobalt's piercing blue eyes that every time you rewatch the thing you'll come to understand and love his nihilistic (and surprisingly-fit) madman even more.

Perhaps it's that he simply lacks a suitable volcano, underwater, or orbital lair?  I can't argue my way out of that one.

The introduction of a true Bondian megalomaniac was a good turn for the Impossible franchise, but the one thing that Ghost Protocol actually isn't, although everyone says it is, is Bondian.  Bond films are enamored with a kind of lifestyle porn that barely features in Ghost Protocol, possess an attachment to sex and sexiness that the Impossible films deliberately avoid, eschew the teamwork that Ghost Protocol champions, and honestly I don't think there's one of the things that's remotely this well-paced.  (You could count on one hand the number of Bond films that are well-paced.)  Whereas Ghost Protocol, the longest of all the Impossible films, feels like the second-shortest.  Plus, how many times did you see Roger Moore climb a skyscraper?  The gentleman could scarcely climb a flight of stairs.  If this is a Bond film, it's the best of them.

Finally, there's a human element, too, filling up the small gaps in Bird's design, like mortar—though I suspect it's here only because M:I 3 couldn't be completely ignored.  But it could be redeemed; and in a masterstroke of characterization that one honestly could never have expected in an Impossible film, we are made to genuinely feel Ethan Hunt's sacrifice.  The beauty of it is, nobody had to make us feel anything.  They did anyway.  That's fine filmmaking—and, yes, fine screenwriting in particular.

Ghost Protocol isn't considered the best for no reason, even if everyone is wrong.  Though it will always pale a little bit before the formal excellence of Brian De Palma's original, it competes forcefully for my affections, too.  Surely Bird's greatest film, Ghost Protocol is a super-classic in its own right.  The only problem might be that it was too good: the most financially successful of the series, it's no surprise that Cruise, his career now seriously ailing, might have come to conclusion that Bird had given him the magic formula to make people like him again.

But that's for next time.  For tonight, let's keep our eyes fixed to Ghost Protocol—one of the finest cinematic pleasure machines ever made.