It's so [checks notes] bad 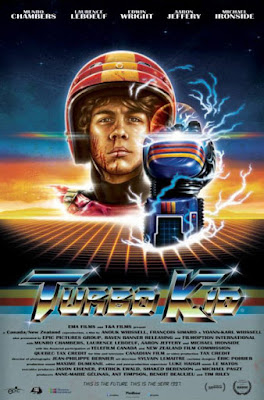 It's shocking enough that Turbo Kid simply isn't obnoxious in its pandering (though pander it does, for 95 straight minutes), but, somehow, it's actually good.

Released back in 2015 to the kind of backhanded, "do you remember the 80s?" acclaim that made me interested in it, but not interested enough to see the results for myself, Turbo Kid was the first feature, after a score of shorts, by the Canadian filmmaking collective we've been invited to call RKSS—"Road Kill Superstar," and I wish I hadn't looked that up—though it's possible that the trio is just as well-known (if they be known at all) by the names their parents gave them, Francois Simard and Anouk and Yoann-Karl Whissell.  With more recent efforts by the team having reminded me of their first film's existence, I finally got down to the business of seeing what I'd missed, and it turns out that, actually?  It's a delight.

Now, Turbo Kid's a stupid movie, clearly—it makes no effort to hide that from you, starting with the fact it's called "Turbo Kid" and continuing from there, with one of its very first gestures being a putatively cool bicycle stunt set to a hair metal power ballad—but, like so many gems from the cinematic decade its makers hold in such high esteem, it's only "stupid" in very, very smart ways.  It's a pastiche that avoids avowed parody, or even avowed referencing; I suppose that if I were absolutely forced to choose just one single box to put it in, I would still label it "a comedy" (without even much second-guessing), but the film itself very rarely admits to being one.  So while the lowest thing in movies is to make one that's intentionally bad, and RKSS has written and directed a movie that is, to any casual observer, definitely, almost objectively bad, the intent behind all their "bad" choices never curdles into contempt, because there's never any indication that they think they're bad.  It's a movie that's animated by a genuine passion for the nonsense it contains—good or bad, virtually every moment in this movie is marked by unconditional love, and a word that's repeated twice in the film (with appropriate badass inflection) is "playtime," which really cuts to the heart of the matter.  Passion and love and playfulness can carry any piece of art a long way, especially if it lets you share in its makers' sense of fun, and Turbo Kid is literally nothing if not an earnest attempt to give you an hour and a half of nostalgic fun.  Hence the worst thing about it, without any competition, is the premise inherent in the title, which—of all the many arbitrary, dumb things this toy box of a movie contains—is the only one that feels lazy.

It's a pastiche of a lot of different stuff, but you can pin it down mostly as a distant continuation, and hybridization, of two key strains of 80s cinema: namely, the No-Budget Road Warrior Ripoff and the Direct-To-Video Rad Sports Movie (e.g., a movie literally named Rad).  This combination isn't entirely new either—the film it reminds me of most of all is 1990's Prayer of the Rollerboys—but you can say that Turbo Kid pushes both its genres a whole lot more than most (any?) of its predecessors did.

So it's the story of the nameless Kid, a rider in the poisoned Wasteland that was once, according to various signage, rural Quebec.  Living in a bunker festooned with the relics of a bygone age and surviving by scavenging and trading with the less-threatening denizens of his post-apocalyptic world, the Kid's routine is shattered when he looks up from his comic book during a moment of solitude to find the barely-blinking eyes of a girl, Apple, staring back at him.  Attaching herself to the Kid as his new best friend—after saying her farewells to a corpse the Kid didn't notice, and which has apparently been there a while—they develop a certain rapport, cautious on the Kid's part, as he teaches her his rules for living in a land of chaos.  Inevitably, chaos catches up with them anyway: Apple is snatched by a trafficker, and the Kid—narrowly escaping himself thanks to a lucky fall into an underground military installation—vows to rescue her with the artifact he's found down there, a laser-shooting Nintendo Power Glove.

Or at least that's very obviously the model the designer based it on.  Fucking NERDS.

That's the laziness I was talking about, though the rest only seems lazy on paper: getting to Apple turns out to be the easy part, but once the Kid finds her, the continuing misadventures of our heroes—joined by Frederic, the ANZAC arm-wrestling cowboy warlord who is, apparently, the closest thing to "good government" this fallen world's got—lead them into deadly conflict with the despotic Zeus and all his colorful minions, who would frankly prefer to throw their bodies into their meat grinder in order to extract the ten or so gallons' worth of palatable water inside.  And so begins the great running battle to determine just who shall rule what's left of French Canada, which we find to often be fought from the backs of amusingly small bicycles.

It's honestly a lot.  Besides the basic concept of Mad Max On Ten-Speeds, we get, in no particular order: Crocodile Dundee; robots (good and evil varieties); low, low-rent superheroics, patterned (if patterned on anything other than those Power Glove commercials) on Japanese tokasatsu shows; a Chosen One narrative characterized more by pop culture detritus than personality; and, last but not least, Michael fucking Ironside as the villain, in a camp performance that draws on his commanding voice and presence, sure, but also upon his extremely subtle sense of humor (as well as his general unwillingness to do too much).  And what could be more 80s than that?  The kaleidoscope of kitsch works amazingly well—it helps that most of the tropes thrown into the blender here tend to somewhat belong together—and it's always more "look at this cool thing!" than "look at this stupid thing," because Turbo Kid genuinely thinks it is cool, which is, of course, the most important part of the joke.

Sometimes it's even right, though.  Maybe the most interesting thing about it is how it so eagerly takes on the form of a joyless, perfunctory 80s cash-grab and imagines what they might've been if they'd been cute and clever and filled with ideas instead.  One of Turbo Kid's better tricks is its approach to action, and as it's inevitably a somewhat lousy action movie in the grand scheme of action movies, doubtless no more able than its forebears to afford such luxuries as "setpieces" or "actual stunts," it turns, rather, toward a brand of cartoonish, creative gore, borrowed from the likes of Peter Jackson and Sam Raimi when they found themselves in similar straits (that is, before Jackson fell into Narnia or whatever, and before Raimi apparently died five years back without anyone bothering to mention it).  Turbo Kid wonders what would've happened if someone got shot in the back while taking a piss in Braindead.  Turns out it's the finest kind of juvenile laugh.

Even then, it's possible that its best trick is simply in its actors; maybe just one actor.  That's not to denigrate Ironside, nor Munro Chambers as the Kid (his stripped-down evocation of a lonely adolescence surrounded by nerd garbage and no human contact, without getting deep or thoughtful about how that would actually work psychologically in this desperate setting, is exactly what this particular movie needs).  I'm saying only that there's an obvious best-in-show, and that's Laurence Leboeuf, who takes on Apple—the film's most potentially-annoying character—and turns her into the funniest and most adorable, basically by making her as annoying as possible, drilling straight through to the other side and playing Apple less as the Manic Pixie of her type and a lot more as a batshit insane child, thrilled to the point of crazed ecstasy by everything, no matter how dumb (or deadly).  There are story reasons why this is so, but even before we get an explanation, Leboeuf has locked down the character, deciding that the script that gave her just one note will get nothing but that note, not even variations on that note, and she bites down hard on Apple's single personality trait—she almost works with nothing but one single facial expression—with the most admirable kind of commitment to the bit, prancing through the end of the world with an ear-to-ear grin not because she's oblivious but because—well, why not?  It is, after all, kind of a blast.  (Meanwhile, one of the most period-accurate things about the movie might've not even been intentional: "teens" played by people in their late 20s.)

But I said "form" a little bit ago, which is why it's worth mentioning that I meant that in a very general sense.  Turbo Kid gets a lot of design elements right (Road Warrior minus budget equals "repurposed off-the-shelf sporting goods"; hell, Road Warrior with a budget still had to raid a sex shop to get its costumes), but it doesn't really know how to mimic the form, and this shows up in ways big and small: from the CGI that I think is kind of trying to look like cheesy 80s optical effects, but not really succeeding, and therefore having a tendency to look more like a YouTube video (though some CGI that's trying to look like watertank effects fares better), to the GoPro shots attached to bicycles that betray, in the worst possible moments, that this movie was made in an era where cameras are small and cheap enough that you can attach them to biycles, to cinematography that doesn't even make an attempt to replicate what any actual Italian rip-off made in 1985 would have looked like (that is, uncorrected and a lot grainier).  And I do feel like that's a bit of a shame.  I mean, Tarantino manages it.

Where it succeeds in conjuring a true 80s mood, however, is in the score by the Quebecois electronic duo Le Matos, and I have a sense that they're the biggest reason Turbo Kid works even slightly: this is genuine retrowave gold, and while every other element—enjoy it or not—is laughable on its face, Le Matos' score takes everything absolutely seriously, and pulls actual emotions out of the story (perhaps most importantly, the threadbare illusion that these gravel roads and green fields outside Montreal represent a dying planet we should feel pity for), and these are emotions I doubt the film could ever have attained by itself, even if it had tried twice as hard.

Altogether, then, it's an astonishing success: a winkless parody that works almost as well straight—or, at least, as the kind of adventure film they would've made back then, with the sense of anarchy and tonal derangement that, frankly, made so many great 80s films what they were.  It has very real flaws, even on its chosen level of throwback curio: everything that's Turbo about our Kid is kind of terrible (that is, not in a funny way), and the best thing about the "superhero" phase of this cycle is that it's oddly pointless (for very little about this movie would need to change if he did not have Laserblast powers).  Likewise, it has a final battle that slightly wears out its welcome, concluding in a final twist that doesn't do too much other than to throw one more trope onto the pile.  Oh, and perhaps needless to say, you will occasionally have to tamp down the urge to give this movie a swirlie.  But it's a pleasing thing, anyway, to see crap done with this much care; and that's exactly what Turbo Kid is.