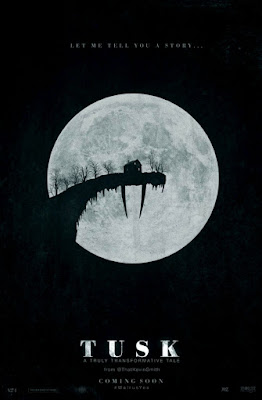 One of the best and worst horror-comedies of the 2010s in a single 101 minute package.  Koo koo kachoo.

2014
Written and directed by Kevin Smith

In a way, my relationship to Kevin Smith belongs to the past: he's a filmmaker that I have an absurd amount of affection and nostalgia for, maybe too much affection and nostalgia for (Mallrats rules, guys).  But he's also a filmmaker I lost interest in somewhere along the way, despite having seen hardly one of his movies that I didn't at least like, if not love.  Maybe it was just hard to escape the impression that, once he was finally done mining hollow his shared universe of increasingly-cartoonish Jersey weirdos, there just wasn't much left for him to say.  (Certainly, Red State being on in the room while I was doing something else did little to rekindle my fandom.)  And so, while it was impossible to not be curious about it, I made no strenuous efforts to catch the first installment of Smith's abortive "True North Trilogy," back when it came out in 2014—and it was in and out of theaters so quickly that "strenuous efforts" would've definitely been required—and afterwards Smith just continued to sit there in the back of my mind, collecting dust.  But then something reminded me—oddly, it was not the release of Jay and Silent Bob Reboot, which is honestly a happy coincidence—and I decided to satisfy my half-decade-old curiosity once and for all.

Tusk was born out of unique circumstances that spark a perverse interest, though they certainly don't recommend it: in 2013, Smith and his long-time producer Scott Mosier knocked-together the basic narrative of the film over the course of an hour during an episode of their long-running Internet radio show, SModcast, after which they turned to their audience and asked them to vote via Twitter, #Walrusyes or #Walrusno, on whether the (walrus-centric) movie they had described should actually exist.  That seems like a biased sample to me, but the #Walrusyeas had it, and Smith started putting it together, basically as an avowed practical joke that, due to Smith's name brand, snowballed into something with a three million dollar budget (if evidently still not enough to secure the rights to the obligatory Beatles needle-drop) as well as some cheap-but-genuine actors attached to it, a fact that has soured the grapes of more than one still-struggling indie filmmaker.  The problem for everyone else is that Tusk actually does come off exactly like something hashed out during a stream-of-consciousness bull session between two friends (who were, likely as not, high), "transcribed" rather than "written," let alone "written with more than one draft involved."  This isn't at all accurate; the finished script bore marked differences from Smith and Mosier's podcast pitch.  But it still feels made up as it goes along, and, nominally, this off-the-cuffness was even part of the gag.  The problem is that maybe Smith lost sight of what, precisely, his gag was.

Tusk begins by introducing us to its intended victim, Wallace (Justin Long), a failed comedian who reinvented himself as the host of a popular podcast, not entirely unlike another podcast in this regard, except Wallace's is nasty, and sort of evil.  So: alongside his co-host Teddy (a resuscitated if not revived Haley Joel Osment), Wallace runs The Not-See Party, a show dedicated to the stupid but sadly not-implausible premise of Wallace reciting a bunch of rambling hearsay at Teddy in a snarky, edgelording and deeply-unfunny register.  (It's my feeling that this aspect of the film has at least aged interestingly, if not conventionally "well.")  Now, it's entirely possible you already wanted something terrible to happen to Wallace from the moment you saw him and his symbolically-loaded mustache (personally, I find it suits Long surprisingly well).  But if that didn't do it, and the toxic nature of his podcast didn't do it, Tusk still isn't done stacking the deck, since Wallace is also an asshole (and casually racist) to his girlfriend, Ally (Genesis Rodriguez, whose incongruous model-style hotness never manages to feel like it belongs anywhere near this movie).

Fortunately, a terrible thing is indeed on the horizon for poor Wallace: his trip to Manitoba to secure an interview with the so-called "Kill Bill Kid," who lost his leg in a tragic katana accident and gained Internet infamy in the process, goes awry immediately when he arrives to find that the Kid committed suicide rather than bear the world's mockery for one moment more.  Despondent, Wallace takes refuge in a Winnipeg bar, where, above the urinal on a corkboard, he finds a handwritten ad for boarders that piques his interest, and sends him to Bifrost in the further north to meet Howard Howe (Michael Parks), a wealthy eccentric who regales him with tales of life and the sea whilst the Internet personality behaves like a jackass.  What Wallace doesn't know is that he's already doomed.  Eventually, Howe explains to him his purpose here: obsessed with recapturing the peace and companionship he once felt while he was stranded on an Arctic rock with a gentle sea-beast he named "Mr. Tusk," Howe has determined to recreate his animal friend by surgically transforming a man into a walrus.  This has not worked out even once in the twenty or so times he's tried it previously, but it's entirely possible that Wallace might get lucky.

I  mean, I know: the efficient version of that synopsis is "this is the movie where a guy gets turned into a walrus, duuuuude"; and it is, of course, a comedy.  It is a superb comedy as far as this goes, but also one about as far afield from Smith's typical style as is possible, and despite being extraordinarily funny, every laugh is driven by the absurdity of the premise being played entirely straight.  It borrows the setting and basic structure from AIP and Hammer's Gothic horrors, updating it with the accoutrements of the subgenre's 21st century torture porn successors, alongside some self-deprecating social satire and horrific facts about Canada, and Smith pursues the parody it always was with the most wonderfully hilarious gravity.

Smith has always been good with performance, and, once he gets there, Long credibly embodies helpless terror and animal rage; naturally, he also credibly embodies a self-regarding shithead, but that seems mean to say, especially considering how much I admire the work he's still able to do with his big eyes—the only tool left available to him, save pitiful yawps, after Howe cuts out Wallace's tongue—while struggling valiantly under his pinniped prosthetic.  Nevertheless, the real show here is blatantly Parks (reuniting with Smith from Red State), who brings the most excellent kind of high camp, exuding charisma and whimsical menace, and gifted with something like a dozen perfectly insane monologues about the nature of man and walrus that never cease to be a joy to witness.  There's a cognizable argument to be made, too, that Tusk is Smith's handsomest film, though this argument tends to be made by people who think the cutting and blocking of a successful comedy just "happen" and a director is to be judged solely on the flatness of his lighting.  Even so, Tusk is a uniquely moody episode in Smith's career, with surprisingly careful cinematography that captures terrifying one-sided conversations and the dankness of a decaying walrus pen equally well, allied to a willingness to let the ugliness of the scenario curdle into cold dread in the editing suite.   In other words, it absolutely works, aesthetically, as horror, particularly in its eagerness to showcase goremeister Robert Kurtzman's special walrus effects without outrunning those effects' rather-constrained capabilities, except to the extent the movie-fakeness of it works to heighten the grotesque wrongness of the whole situation.

But, of course, it isn't horror, which is the joke: it is, in the end, a deliberately-bad movie such as one rarely finds in the wild, that understands that good bad movies are fun and funny because they're not trying to be bad (I can only name a couple of other successful examples, Turbo Kid and Mandy).  The pitch-perfect parody of Corman and Cronenberg and Yuzna and The Human Centipede and God knows what else arrives by way of something that doesn't own up to being a parody at all, that only "isn't horror" because its scenario is simply too fucking stupid to take seriously—which inevitably calls into question why we do take so many other stupid horror movie premises seriously—yet somehow the film is able to avoid a single wink until the moment the Fleetwood Mac appears on the soundtrack (not at all an adequate substitute for the Beatles), and even this feels legitimately aligned with the tone, if only as ironic counterpoint.

This is the part, however, where I acknowledge I've only described about 60% of the fucking thing.

In its translation from podcast to film Smith found a desperate need for padding, which is counter-intuitive to say the least given that Tusk is rather obviously too long yet also weirdly-truncated, as it jumps from "James Caan in Misery" to "full-fledged walrus-man" in what feels like an afternoon.  And it is almost impossible to describe how hateful Smith's choices for padding are, with a superfluous subplot about the girlfriend and co-host that overcharacterizes their non-characters to a horribly unnecessary degree (without being even momentarily convincing about it), as they attempt to track Wallace down, this turn itself being born of the single worst moment of the A-plot, a lifeline left lying around for Wallace, and for Smith's convenience, in a telling retreat from a joyous silliness that we could all partake in, and into a sour contempt for the audience that only a very lazy writer could possibly benefit from.

And this would all be bad enough—it would be very bad but functional—except that the sourness gets exponentially worse with the arrival of French-Canadian detective Guy LaPointe ("Guy LaPointe"), a role and an accent that will singlehandedly make you understand why everybody else has despised Johnny Depp for years.  It is an active betrayal of this movie, and a bleak mirror to it, replacing non-comedy that's "unintentionally" funny with avowed comedy that is apparently intentionally the opposite of anything anyone has ever thought was funny.  The best you can say about it is that it permits an excellent downbeat ending that, even so, could have been reached by any number of other means; the worst you can say about it is that it involves a fifteen minute monologue/flashback delivered by Depp and written by Smith at the bottom of both men's careers.

It takes a rather astonishingly-good little horror-comedy, with a fresh and fascinating perspective on its genre, and shoots it square in the head; I don't know if I can identify another movie that so brazenly self-sabotages itself, or another moment that more thoroughly derails a movie that had previously been doing just fine, and there are at least three moments in this one that are the all-time champs.  I want to value it anyway, because what it does well it does great, but sweet Christ, does Tusk make it hard to even give it a pass.