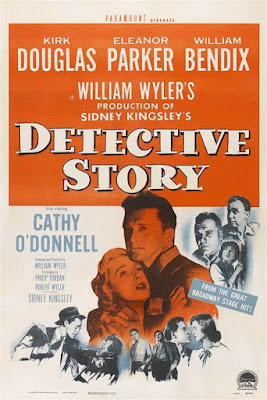 DETECTIVE STORY
1951
Directed by William Wyler
Written by Robert Wyler and Philip Yordan (based on the play by Sidney Kingsley)
Spoiler alert: moderate 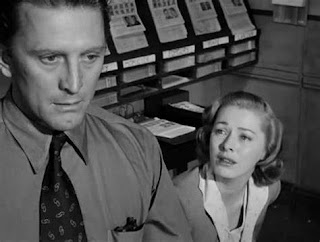 William Wyler, it's said—notably by André Bazin, for example, if you need me to source it—was the best translator there ever was between the stage and the screen.  Of course, it's hard to affirmatively confirm that: practically every single Old Hollywood director of any note whatsoever was a big adapter of plays.  (People won't shut up about how everything these days is preexisting IP, but it was always so; you just don't notice it because, in the first instance, you don't read, whereas stageplays, by their very nature, get swallowed up by time if no one performs them, while their reproducible cinematic adaptations persist and become the definitive version.)  Still, it's hard to deny Wyler the title, considering a track record that includes Dodsworth, The Little Foxes, The Heiress, The Desperate Hours, and more.  Even the one time he got the process of adaptation so gobsmackingly wrong that it's not clear why he ever bothered, with These Three, he eventually remade it, the right way, as The Children's Hour.  But then there's 1951's Detective Story, his second adaptation of Sidney Kingsley (the first was 1937's Dead End, and Kingsley asked for Wyler because he'd liked Wyler's work on Dead End), and with Wyler's reputation as the great adapter resting on his remarkable ability to take even the talkiest, stagiest play and make it so cinematic you could only guess at its stage origins by the fact they tend not to leave the house, Detective Story could only come to me as an unexpected and unpleasant surprise.
It's the kind of thing that anybody in Hollywood, let alone someone of Wyler's stature and skill, ought to have been slightly embarrassed of making in 1951—I'm sure nobody at Paramount actually was, as it seems to have made a handsome profit—but, if I were to put myself in the mindset of a contemporary viewer, I might be livid that I paid good money to see a movie that's just barely more cinematically sophisticated than the episode of Lucy I missed at home (probably "The Fur Coat," which is, indeed, rock-solid Lucy).  And then, even when it is more sophisticated, half the time it's hardly even to its benefit.  It's a movie where you realize halfway through that the set has no fourth wall, which isn't necessarily an insuperable problem; Rope doesn't have any fourth wall, but Detective Story isn't otherwise conducting one of the most exciting and successful experiments in cinema history, either.  Over an hour in, Wyler finally strives to correct the deficiency with a shot that allows the camera to turn around the proscenium.  It's for one single scene, it's set in a little corner, and it's bizarre how out-of-place it feels.  It's a movie where my favorite single shot comes under the opening titles, with a bird's-eye-view of the streets of New York: strangely orderly, I half-wonder if it was staged specifically for the film; the usual cliché would be "ants marching," but it looks more like an aquarium, with two remarkably regimented schools of fish swimming down each sidewalk.  Well, either way, that this is the film's best shot is hardly any good sign for what's to come—though aesthetics aren't even the biggest reason I don't like Detective Story. 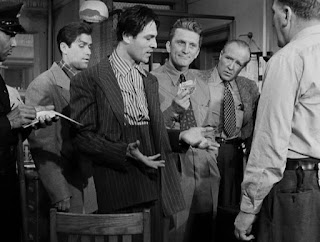 Frankly, I suspect that Kingsley's play simply isn't good in the first place, though I don't envy Philip Yordan and Wyler's brother, Robert, the job of adapting it.  For one thing, Kingsley's social realist/"social realist" play was premised on the kind of grubbiness that just wouldn't fly under the Production Code, obliging Wyler and his screenwriters to make certain compromises and talk around certain issues.  For two, and more importantly, it is effectively a single-location play.  Other than the introduction to our leads, and a single, badly rear-projected scene that gets us away from the building—representing the barest minimum effort to "open up" the material for the screen, and I expect both scenes were presented differently on the stage—we never even leave a single room, except, anyway, to visit adjoining rooms.  Oh, and a roof, I guess.  And of course a staircase.  By God, Wyler would have his staircase, though he scarcely gets to use it.
Well, that room is the central office of the 21st Precinct of the New York Police Department, home of two-fisted detective Jim McCleod (Kirk Douglas).  We meet McLeod outside during the brief period that Detective Story still looks like it takes place in a real setting in actual space, as he kisses his loving wife Mary (Eleanor Parker) goodbye to start another day of busting crooks and/or busting heads.  His big case lately is that of, ahem, the rogue obstetrician, Karl Schneider (George Macready), who's continued to practice all kinds (by which I mean, "one very specific kind") of medicine without his license.  McLeod's been chasing him for the better part of the year, almost obsessively, thanks to one dead girl and another presently dying in the hospital.  Today, however, Schenider's attorney (Warner Anderson) has called for a colloquium with McLeod and his boss, Lt. Monaghan (Horace MacMahon).  His client's ready to turn himself in, but the lawyer wants assurances that McLeod won't abuse Schneider once he's in his custody, for, as he explains, McLeod's interest in Schneider smells of a personal grudge.  McLeod genuinely has no idea what he's talking about, though we get a sense of how good a detective he must be from how improbably long it takes for him to finally figure it out.  (And, minor spoiler, he's actually just told.) 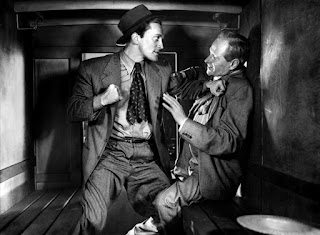 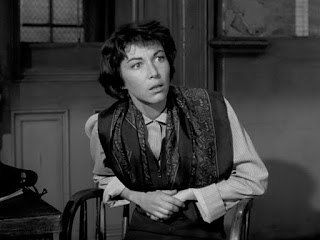 Grant's playing the dumbest girl in Brooklyn after she got kicked in the head by a mule, though this is less aggravating, in that it's at least less noisy, than Wiseman's burglar, whom Wyler encourages to do "cartoon maniac" and "cartoon Italian-American" at a constant 95 decibels.  (This is, honestly, one of the most exhaustingly shouty movies of its era.)  The embezzler's B-plot offers some modest value—O'Donnell is better here than in Best Years, and as the embezzler is McLeod's other case and (theoretically) a sympathetic one, he provides an opportunity for McLeod to test whether he wants to soldier on with his shithead's integrity or become a more decent person—but then the burglars' C-plot turns out to have been a plot device all along, tasked with tying the story up in a depressingly artless bow.
Detective Story has its compensations—mostly Parker, occasionally Douglas, some decent deep staging through the proscenium (because Wyler wasn't totally asleep at the wheel), a few good close-ups and two-shots, some hilariously-bad tough-guy dialogue, and, at its core, an interesting (albeit schematic) idea for a relationship drama—but this other stuff, this "texture," this chaff pretending to be wheat, winds up doing active harm to even the good parts of the film by stealing so much time away from them.  By the end, you're left with the sinking feeling that this tale's perverse adherence to the letter of the Aristotlean unities (if hardly the spirit) had obviated much possibility for Kingsley, or Wyler, to actually pursue that relationship drama with anything like humanity or nuance.  Alternatively, they didn't care, or thought this was good enough, so long as they threw a half-movie's worth of utter nonsense in to hide the fact that the A-plot moves jaggedly from beat to beat without any of the connective tissue they needed but didn't bother to include.  This is the very worst thing about Detective Story, and it becomes incredibly hard to ignore as the film nears its conclusion, as McLeod and his wife flip their positions every other scene across a three-part argument/break-up that somebody thought would emotionally land anyway because it had been buffered out by the pointless bullcrap of the B- and C- and Z-plots.  Obviously, it doesn't.  And that's what Detective Story leaves you with: the conviction that, no, it does not "work" at all.
Score: 5/10
*Not, in fact, the same person.  I looked it up, it's true.
Posted by Hunter Allen at 2:04 PM